This year’s Giro features some super-tough mountain stages, including a triple-decker ball buster to the legendary Tre Cime di Lavaredo, and stage 17’s hideous ascent of the fearsome Zoncolan with 5km at over 15% average grade… uggh. Predictor-Lotto’s Dario Cioni and Win Van Huffell took a close look at both stages, and take us along for the ride…

• Hello everybody –
Times goes by really fast and we are already at the end of April. This has been a very busy month for me, with lots of racing and travelling. At the beginning of the month I was racing in Pais Vasco, and that it would not be an easy week was clear since I had a look at the course profile. I left home on Easter Day, with an early flight out of Pisa and was happy since I was arriving at the Hotel at noon, and therefore I could watch Flanders on TV. 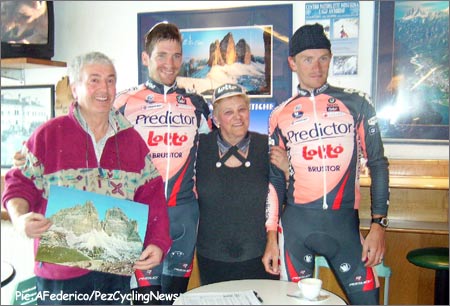 When was the last time you saw the owners of your local cafй gleefully posing for pics with unexpected guests?

But it was soon clear it would not be an easy day, since there was quite a lot of fog close to the airport. My flight was delayed and it was clear I was going to miss my connection in Barcellona. Finally we took off, with 3 hours delay and once I got to Barcellona went to the ticket desk to get a new flight on Bilbao. The next flight out was overbooked so I had no choice than to wait for the night flight, 5 hours later… I got in the Hotel at 23:00, more exhausted than if I had ridden Flanders, 10 hours later than scheduled and after a 16 hour trip. 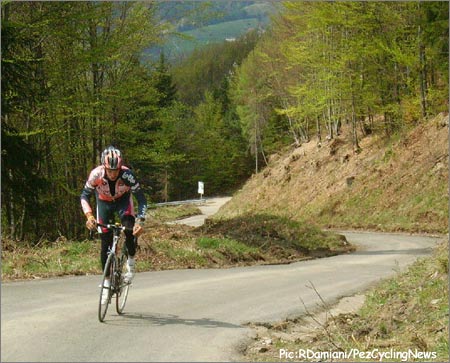 15% grades – that’s all it takes to make these pros look like the rest of us. Yeah, right.

The race was ok, as hard as ever, I even got in a break but did not have the legs in the final, so only got 12th overall. The trip back home was perfect, but I had little time to rest, 3 days, as my next commitment was the test of two Giro stages. 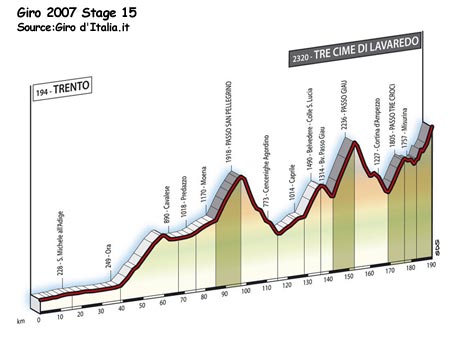 Expect stage 15 to be decisive.

Dolomiti ReCon
This time I drove by car to Verona, where I was meeting with teammate Wim Van Huffell, and Team Director Damiani. From there we drove up to the Dolomites, on a beautiful day. Our target was to check out the Tre Cime di Lavaredo and Zoncolan stages. 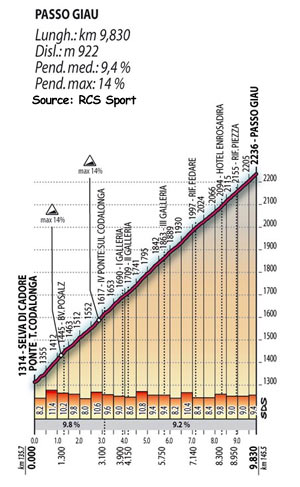 The second climb on Stage 15 is all grunt work – and a nice springboard for riders with gc aspirations.

We first tackled the Tre Cime di Lavarado, driving the first half of the stage. The first climb is a big road that takes us up from the Adige Valley to Val di Fassa. From here Passo San Pellegrino starts. It is hard in the first 5Kms and then it becomes slightly easier followed by a very technical descent (down the side we rode up last year in the Giro). At the end of the descent we started riding up a non-categorized climb (Colle Santa Lucia) that my legs ranked as a real climb then a short descent and we hit Passo Giau. This climb is hard, 11Km at nearly 10% mean gradient. Hard. 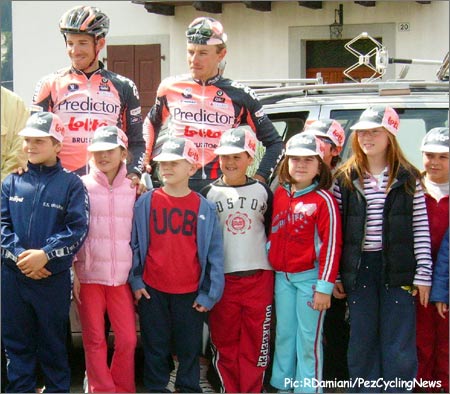 Dario and Wim enlist their secret weapon – an army of tiny helpers to push them through the steepest parts on race day.

Another difficult descent in to Cortina and we start the last climb that is divided in three sections. The first up to the Passo, the second after Misurina and the third up to the Tre Cime. By the way, Misurina is beautiful and it has a few small lakes along the course, all of them were frozen at the time. From Misurina to the finish there are several very steep sections. The only downside was not being able to ride the last 3KM due to snow. I think this is the most difficult stage of the Giro, one where you do not want to have a bad day. 170Km with 4700meters of vertical climbing and most of them on a 10% gradient or higher. 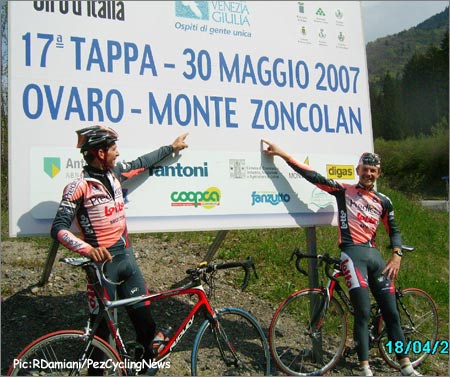 Just in case you were wondering exactly where the boys are headed… Dario and Wim point out the obvious.

Onto The Zoncolan!
I must say the organizers have done great marketing around this climb. No one knew it until 3-4 years ago, today it is one of the most famous in Italy. And we have not even raced up the hardest side yet… 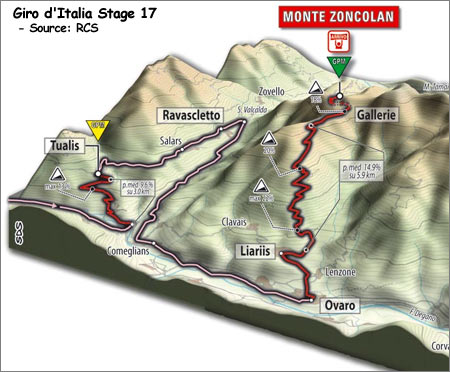 We rode the last 40Km. The second to last climb is under-rated but it could be decisive for the stage. It is short but hard, does not descend straight after the KoM and is followed by a technical descent. If someone has good legs could get away here and gain a small advantage before the Zoncolan.

The Zoncolan is a very hard climb, 8,5Km long.
We climb up to the village, 1Km close to 10%, and then 600 meters flat and we turn left to start the real climb – 4.5Km really steep, with no rest, not even on the hairpins. I rode 39X29, but maybe would like a smaller gear for the race. This is not the steepest climb I have ridden, as Angliru is much steeper, but top 5 for sure, with Mortirolo, Zolden, Cavedonga…. 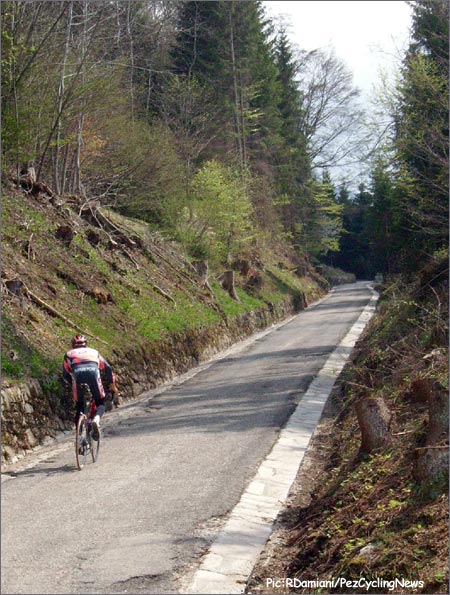 For these 4.5Km it is just you, the bike and the road. It is like a time trial, no good following wheels, you just push on the pedals and start counting the meters missing to the top. Every switchback has a number and is dedicated to a cycling champion.

You start feeling better with 2Km to go, as the road flattens for 400 meters before you go through three very small tunnels, dug-out from the mountain, before hitting the last Km, very hard again.

The road is tight but by the time we ride it in the Giro it will have a completely new surface. I very hard climb……….for sure.