The Milram sprint train looked in good shape barrelling into the closing moments of the first road racing stage of this year’s Giro, but like so often before, there was a ghost in the machine. Aussie rocket Robbie McEwen surfed a free ride to the finish before sweeping home for the win.

Not for the first time in his Giro career, Robbie McEwen used his wits, bike handling skills and sheer speed to get him into exactly the right place at the right time. Milram flayed themselves for their leader, especially in the last 10 k’s of a hot day’s work to pull back the five-man escape group (Pavel Brutt – Tinkoff; Fred Bessy – Cofidis; Arnaud Labbe – Bouyges Telecom; Simone Masciarelli – Acqua & Sapone; Mauro Facci – Quickstep), and a late move from Emmanuele Sella, who had bridged up to the sole survivor, Brutt. 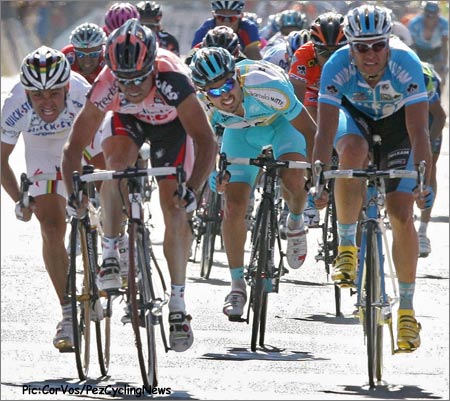 After dominating the final kms, the Milram train ran out of track and Petacchi could only whistle as first Robbie McEwen, and then Paolo Bettini blew into the station in front.

Sella finally caught Brutt with 7 kilometres left, but he was reeled in and passed by Caisse d’Epargne’s Pablo Lastras. He lasted a further 2 k’s before most of the field came together. A slight rise and descent had seen a few groups tailed off the back.

Fresh from their TTT win last night, Liquigas stuck to the front of the field, protecting their top man Di Luca, and his young upstart sidekick Gasparotto, who did his best Cipollini impression with a natty all-pink kit. Lampre were present in numbers at the head of affairs, too. 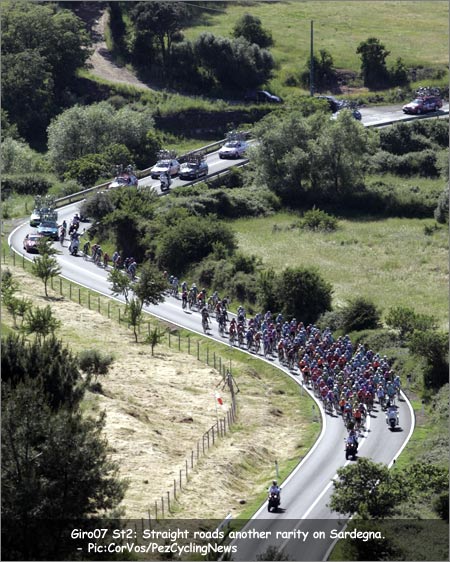 Milram then took over posting 5 on the front to bring Petacchi to the final 250 metres, with a powerful turn from Aussie, Brett Lancaster – a former Giro prologue winner/maglia rosa. Overnight leader Gasparotto had lost contact and slipped back – which was to have consequences later.

Ominously for Milram, McEwen had materialised on Petacchi’s wheel. Velo and Ongarato did their jobs through the final potentially dangerous curve with 300 meters left before it was time for Peta’ to do his thing.

Unfortunately, the modern day Dr Doolittle couldn’t quite finish things off, as McEwen eased by with world champ Bettini also getting past. Upcoming Kazakh Assan Bazayev came fourth for Astana – he rode a successful amateur career in Italy – with Argentinian flyer Max Richeze rounding out the top five. 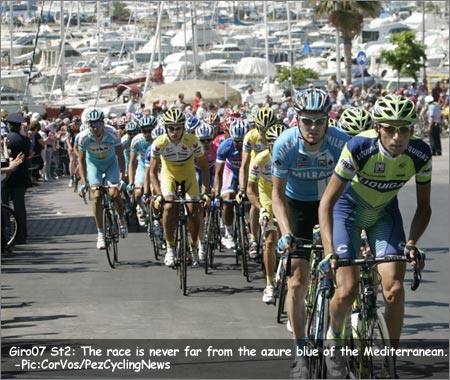 But AleJet can take some comfort from the fact that: a) he looks competitive in the sprints after his horror injury of last year; b) he escaped the crash just at the red kite which took out Gasparotto, and left Quickstep’s Andrea Tonti looking in a bad way; and c) the Milram train is looking in good shape.

Gasparotto has been nudged out of the Maglia Rosa by Danilo Di Luca, but Liquigas still has a stranglehold on the top overall placings.