Of course, it could all go thoroughly and catastrophically pear-shaped, but today the ‘Killer’ proved his mettle as a climber and big-time Giro challenger. Danilo Di Luca shepherded the mountain goats over the Colle dell’Agnello, the Col d’Izoard and safely down to Briancon, before rounding ’em up and finishing ’em off.

For once, we had real racing. This wasn’t the pedestrian crawl to the last climb that seems to happen too often, or some strung-out, lined out, hollow-eyed posse hanging onto the US Postal stage coach that wrung the excitement out of so many Tours de France. 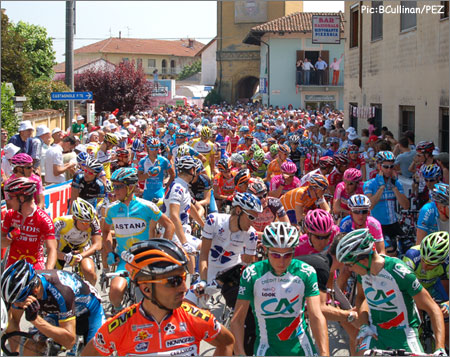 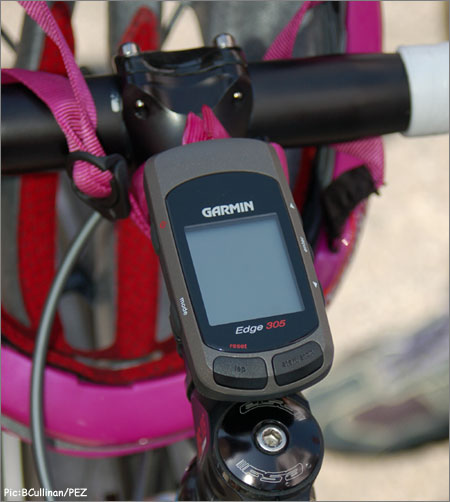 Some, like Ale-Jet, opted for a GPS to keep track of the nastiness ahead, whilst others… 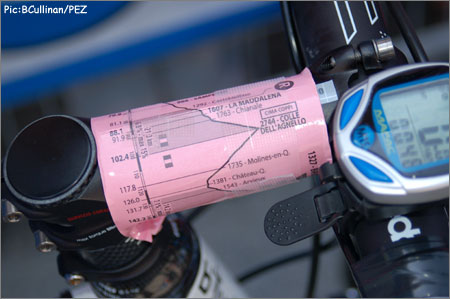 …Opted for the tried and true paper and tape.

Di Luca, winner of L-B-L earlier in the year, took full advantage of some good work by his Liquigas team and the efforts of Gibo Simoni’s Saunier Duval squad, to rack up his second stage win in this Giro (three if you count the Stage 1 TTT…maybe). 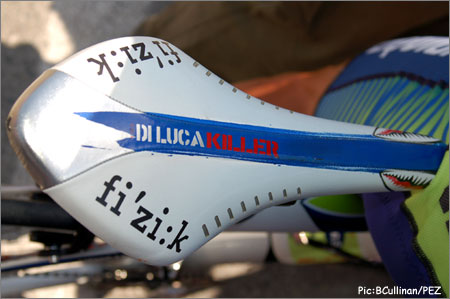 Sometimes a nickname like ‘Killer’ seems to be a bit overkill, but right now, there’s no better nickname in bike racing.

Things exploded early as the leaders started working each other over on the fearsome slopes of the Colle dell’Agnello, this year’s Cima Coppi (Be sure to check out Alessandro’s PEZ preview).

Bouyges Telecom’s Yoann Le Boulanger and Christophe Riblon (Ag2r) attacked early and built a lead over 16 minutes. Behind, Saunier Duval took the fireworks out of the box and grabbed the matches. It seemed like the whole squad was pulling for Simoni. 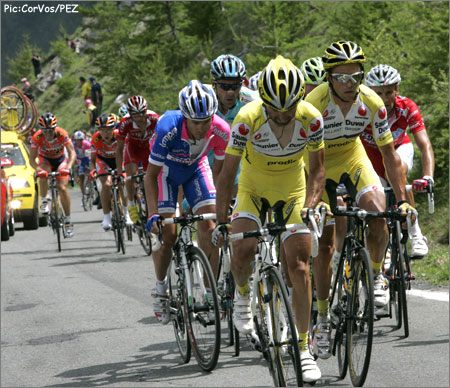 Leonardo Piepoli was a one-man show up the Agnello, wreaking havoc with every pedal stroke. Piepoli…so hot right now…Piepoli.

Piepoli and Ricco lit the fuses and drove the pace, while Eddy Mazzoleni seemed to have been given the nod to go for it by a struggling Savoldelli.

Once Ricco popped, Liquigas outnumbered Saunier Duval 3 to 2 with Wegelius and Nibali shadowing Di Luca. That was of little consequence though as Leonardo Piepoli did the work of 10 men on the upper slopes of the Dell’Agnello. It was an absolutely amazing effort from the Italian – an effort which saw him bring the lead group down to under 10 riders! The combined work of Ricco and Piepoli dispatched all but seven lucky souls: Piepoli, Simoni, Cunego, Di Luca, Garzelli, Schleck, and Mazzoleni. 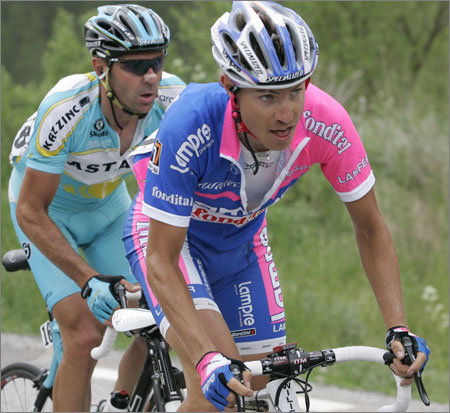 Damiano Cunego looked solid today, but not quite up to the level of Di Luca and Simoni. There’s a LOT of racing still to go though.

Up ahead, Le Boulanger crawled over the top of the Colle dell’Agnello to grab himself a line in the history books. The infighting was raging behind, and the names were starting to split up.

After the twisty and spectacular plunge downwards, the race entered the near-mythic Casse Deserte, and the Col d’Izoard climb clawed its way skywards. Piepoli’s first attack spat Garzelli out. Simoni watched as Mazzoleni did the chasing (the only work Mazzoleni did all day). 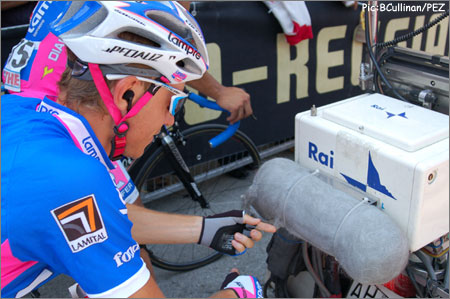 Damiano Cunego wonders if he can hitch some kind of ride with the RAI motorbike at the start…perhaps a motorpace, maybe a tow up the Izoard?

Once Piepoli dropped away, his capo attacked hard from the back of the group – Cunego was wise to it and jumped on.

Simoni went two more times in quick succession – Di Luca locked onto him like a pitbull.

3 kms from the top and Le Boulanger was caught and despatched. The rain was falling, and Cunego was dangling ominously off the back. 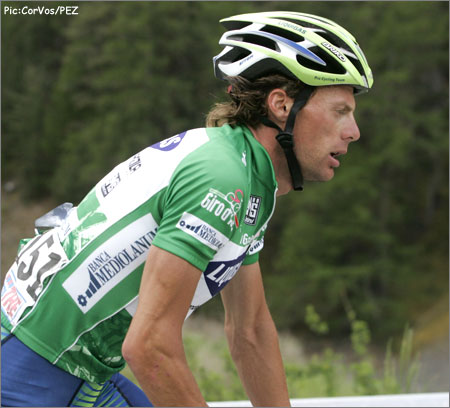 Is it over yet?

Di Luca kicked hard shortly before the summit! A great move, and the others were in big trouble. Simoni gradually worked his way back on the descent off the top – Schleck, Mazzoleni and Cunego joining one-by-one.

That’s pretty much how it stayed until the leaders hit the finishing climb to the finish in Briancon – and it was a steep one – somewhere around 10% for the ultimo chilometro. Di Luca jumped just after the red kite, but was closed down by a super Andy Schleck. He had enough gas in the tank to give it the stick again with 400m left, and though Simoni chased, the stage was secured. 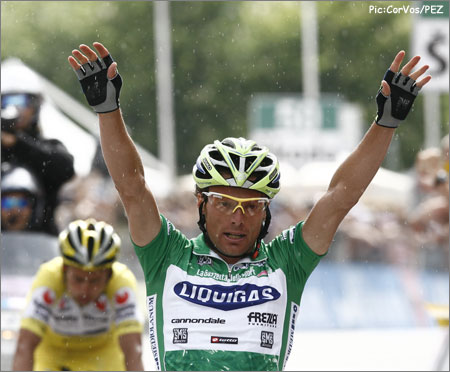 The finish was almost a formality – as we’ve seen repeatedly: uphill sprint…Di Luca…victory.

The 100-mile hell ride over the highest peaks of the race and into France saw off a few pretenders along the way – we waved bye-bye to ‘Popo’ Popovych, while ‘Il Falco’ Savoldelli, famed for his descending skills, was in a land far, far away before the head guys had even plummeted off the Colle dell’Agnello.

George Hincapie, Robbie McEwen and Robert Forster opted not to face the torture and DNS’ed. 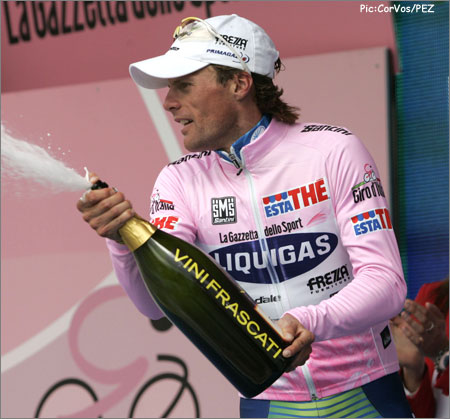 A hard day at the office put Danilo Di Luca back into the overall lead. He’s got 1:25 on Andy Schleck, 2:10 on Cunego, and a whopping 2:34 on Simoni. Lookin damn fine.

The ‘Killer’ has had that look in his eyes since his day one upset when Gasparotto nicked the Maglia Rosa off him during the TTT. Today he looked even more focused and seems finally convinced that he can take the overall – he’s younger than Simoni and Garzelli, more experienced than Ricco and Schleck, in better form than Cunego. Plus, Ivan Basso has disappeared into the past.

Yep, the real Giro has started! Keep it PEZ for all the finest coverage!

Giro Up Close: The Colle dell’Agnello