After yesterday’s hard Mountain Time trial, you would expect today to maybe be a little easier, well it wasn’t! Things just exploded with Simoni, Garzelli and Salvodelli giving Di Luca a worrying time and his team a hard days work.

The stage started from Brianza and took a nice route around Lake Como to Bergamo, two climbs, the La Trinita Dossena and the earlier climb of the Passo San Marco, 192 kilometers of top action.

The best story to come out of the Giro so far; a waving couple on the beach at the finish the other day where zoomed in on by the TV helicopter, trouble was the man was with a woman he shouldn’t have been with, he will have a lot of explaining to do when he gets home.

A group of riders went away after about 80 kilometers and by half way had a gap of 1 minute 50 seconds on the De Luca/Pink jersey main group. As the group climbed the 26 kilometer long Passo di San Marco, they were joined by Paolo Bettini (Quickstep-Innergetic) Sylvester Szmyd (Lampre-Fondital), Alberto Losada (Caisse d’Epargne), Josй Joaquнn Rojas (Caisse d’Epargne) and Pietro Caucchioli (Crйdit Agricole). They had 2 minutes 10 seconds by the top. 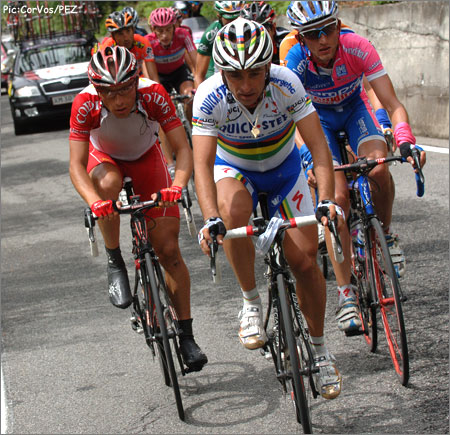 Paolo Bettini had a hard go of it today – he was in the first and final break.

The main bunch was attacked by Garzelli on the climb chased by Cunego and the young Schleck, this didn’t work, but Garzelli has another go with this time Simoni, Salvodelli and Mazzoleni, this puts Di Luca on the back foot and Liquigas has to start the chase.

Eddy Mazzoleni (Astana), Paolo Savoldelli (Astana), Stefano Garzelli (Acqua & Sapone-Caffи Mokambo), Massimo Codol (Acqua & Sapone-Caffи Mokambo), Gilberto Simoni (Saunier Duval-Prodir), Franco Pellizotti (Liquigas) lead over Di Luca’s group by 43 seconds as they start the climb of the La Trinita Dossena and look like they are going to get up to the leaders to make this a very, very dangerous break for the pink jersey and Cunego who have missed the move. 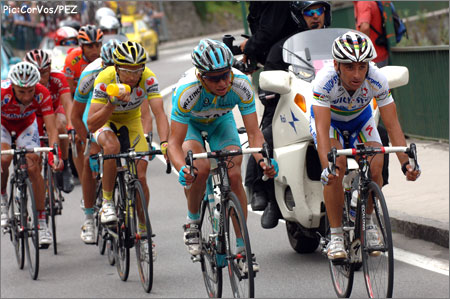 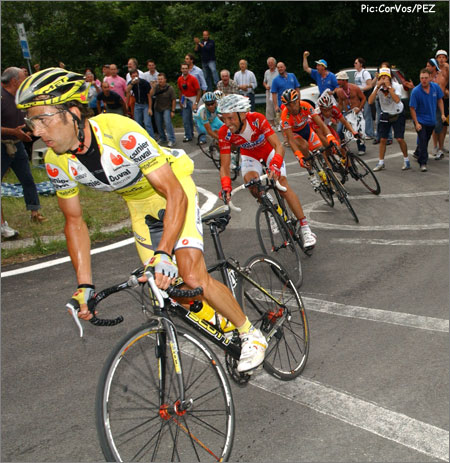 The final selection out of the break was what some might call, high-powered.

Rasmussen who we would expect to be up at the front on the climb gets dropped as Iban Mayo puts the pressure on at the front. Behind the brown stuff has hit the fan and Liquigas and Lampre are putting everything into the chase, they manage to keep it at 50 seconds as now Simoni adds his weight to the escape, this splits it all to pieces and there is now seven in the lead. 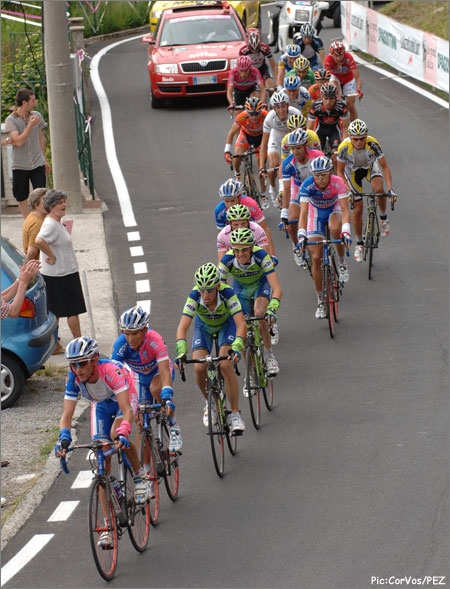 Lampre and Liquigas were up to their necks keeping the break in check.

The top of the La Trinita is taken by Salvodelli then Baliani and Mazzoleni, then its all eyes down for the descent, where Schleck crashes, but gets back up quickly although he need service on his rear brake on the descent, very tricky mechanical work and gets back to the chasers. 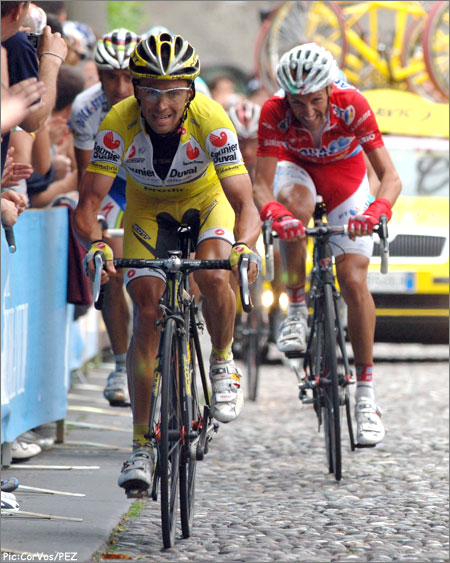 Gilberto Simoni launched what appeared to be a perfect attack, but was caught within grasping distance of the line by a sterling Garzelli.

There is a flat section to follow the descent before they climb to Bergamo for the finish, if Liquigas has any gas left this is where they could bring them back or lose it for ever.

Now at 15 kilometers to go we had Garzelli, Bettini, Salvodelli, Mazzonelli, Baiani, Parra and maybe most importantly, Simoni with a minutes lead over the Di Luca group, Garzelli and Simonl are putting the pressure on to stay away, but of course Simoni has to make up over three minutes on Di Luca and Salvodelli much more, to make a difference to the G.C. 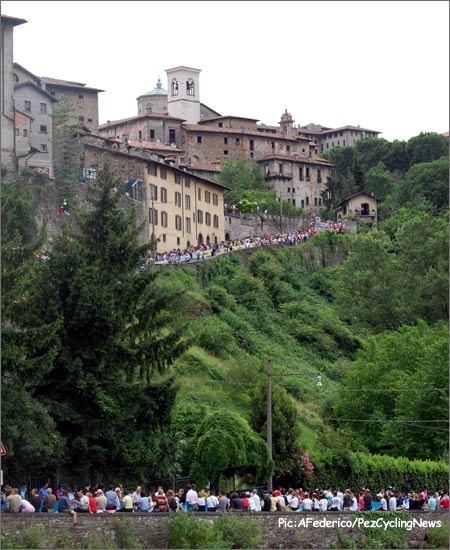 On the race profile it didn’t look like much, but the climb into Bergamo’s Citta Alta was a race defining obstacle.

Wegelius and Pellizotti are the strongmen for Di Luca as they keep it at one minute advantage for the escapees. Bettini is looking good in the group which he has managed to stay with on some steep climbs today, if they stay away he would be a good bet for the sprint from the other six. At 5 kilometers from the finish they have to go over a little hill, the Bergamo Alta, and then drop down for 3 kilometers to the finish after passing through the old town. Simoni attacks over the cobbles followed by Garzelli through arches as Bettini suffers on the wheels of Salvodelli and Mazzonelli. 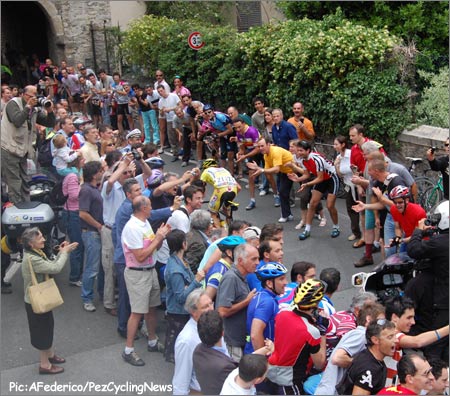 Moments after Simoni’s ball-burner breakaway towards Bergamo, he races towards the ancient city gates while the crowd looks to Garzelli’s chase just out of frame.

Di Luca jumps away from the main group to be joined by Ricco, but up front Simoni is giving it his all to keep them all at bay with Garzelli just meters behind and the two Astana riders pulling Bettini closer. The twisty finish has them all at 100% or more, it looked like Simomi had it but Garzelli was moving that little bit faster to catch him with around 50 meters to the line and takes an amazing win. 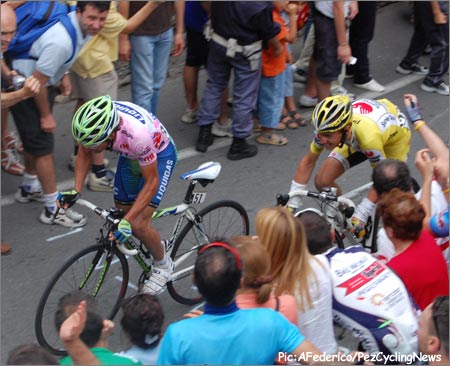 Di Luca and Ricco dig deep to limit the damage over the day’s final ‘climb’.

Further back we have Bettini and the Astanas, then to a big cheer Di Luca, who has only lost 40 seconds on Simoni. What a day! Attacks by G.C. contenders and big chases by defending leader’s teams, crowds of fans all through the stage, who says pro cycling is suffering. We had all the excitement and drama of any stage of any race of any time. 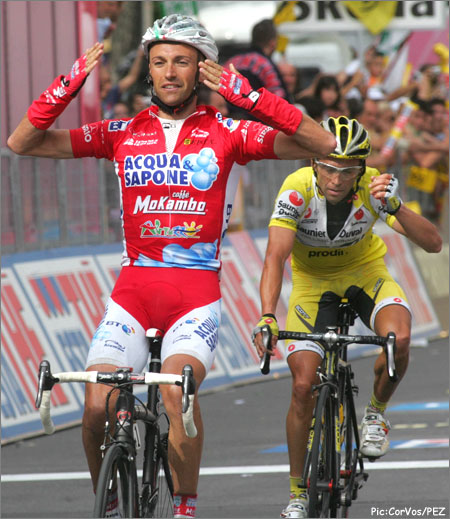 A fantastic win for Garzelli…seems to echo the 1-2 Garzelli and Simoni rode to back in 2004 (over the Mortirolo and Vivione)…remember that?

Long live Cycling! Forget the bad news and revel in what we can see in days like this. PEZ thinks I’m an old cynic, well today was a day to say cycling is still the most exciting sport to watch.

Giro Di PEZ: A Brutt-al TT – View from the Car