Well here we are, the second last stage of this years Giro d’Italia and what a “belter” this year’s edition has been. Today gives some riders the chance of moving up a place here or there and there could be surprises for the starts, we don’t really know how Andy Schleck time trials and Cunego will want to jump over his “old mate” Simoni on overall, and Mazzoleni?

The stage of truth is 42 kilometers long from Badolino to Verona, last time we were here was to see Oscar Freire win the World Road Champs on some of the same roads the riders will be on today. Wet conditions greet the riders as they warm up through some of the best wine growing land in Italy near Lake Garda. The course is undulating with a tricky finish through the streets of Verona, some with cobbles, when the Giro ended with a time trial here in 1984 the finish line was in the ancient Roman amphitheatre, that year Francesco Moser (with disc wheels) beat Fignon to take the victory and the last pink jersey, don’t think that will happen to Danilo Di Luca today. 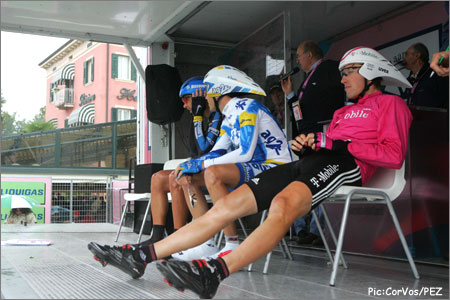 It wasn’t all tense faces and and nervous waits.

The early riders are putting up a time of around 54 minutes, Tinkoff rider Ignatiev is leading as we start to see the faster men get up onto the start ramp, one of the favorites for today, David Zabriskie (CSC) comes in with a brilliant time of 52:58 to go in front of Bodrogi (CA) and Ignatiev. 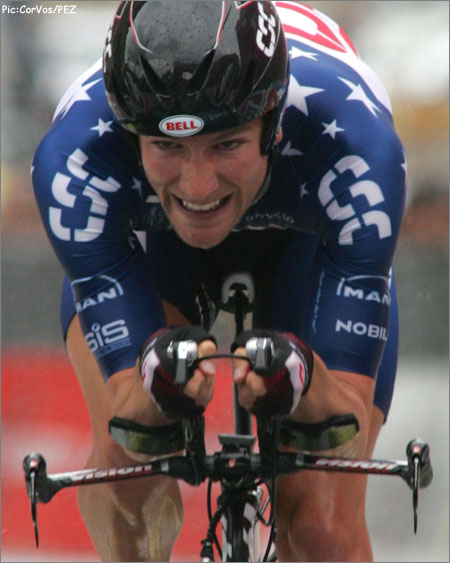 Zabriskie was fast today, but not fast enough to hold off the two Astana boys.

Out on the course we hear that Savoldelli (Astana) is leading through the 10 kilometer point as we watch the podium places line up and head off, Cunego looked concentrated as he gets a big cheer from his many fans here close to his home, but Gibo is smiling at the crowds, young Schleck is obviously nervous and Di Luca fiddling with his pink over shoes before he heads down the ramp and into the history books. 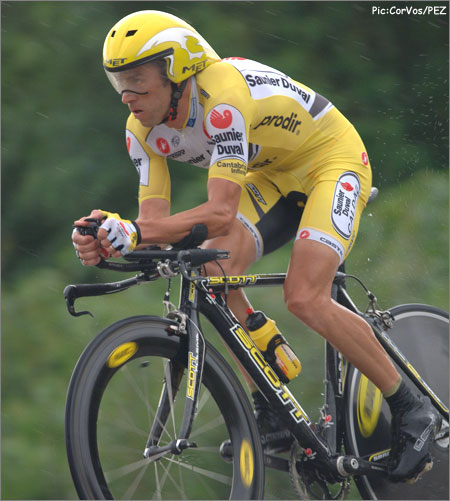 Simoni held off arch-nemesis, Cunego, for third, but then Mazzoleni crushed em both to make em both look dumb.

Out on the course Schleck looks like he is fighting his Cervelo TT machine as his shoulders are doing a lot of movement over the bars on the short climb before half way, as the rain starts to drop a bit heavier onto the riders backs and the umbrellas of the spectators lining the route. At 29 kilometers Savoldelli is still ahead of Zabriskie and looks to be doing the ride of the day. 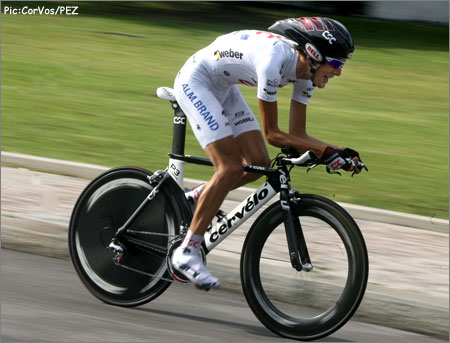 Schleck was great, but not superhuman today. He took some time out of Di Luca, but not nearly enough.

Just to remind you the overall situation is that Schleck needs 2 minutes 24 to take the pink jersey, Simoni only needs 4 seconds to get in front of Schleck and Cunego has to beat Simoni by 1 minute 1 second to get on the podium, but Mazzoleni is breathing down his neck at 17 seconds, a few things are possible. 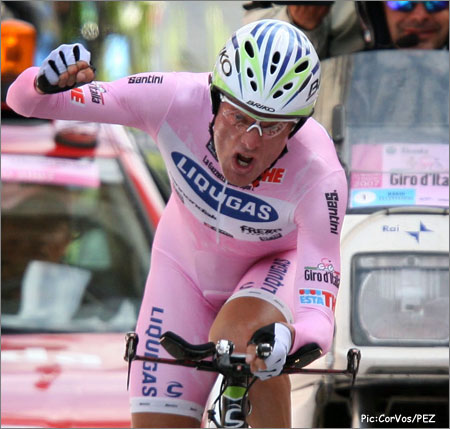 Schleck and Di Luca are riding at about the same speed, so there doesn’t seem to be any danger for the first two places, but Cunego is giving it his all to beat the old enemy Simoni; at the 10 kilometer point Cunego is nearly 30 seconds up on Simoni. Savoldelli has ridden the time trial of his life beating TT specialist Zabriskie by 38 seconds with a time of 52:20 on his rather smart BMC machine, same as his team mate Mazzoleni who is also flying and at 29 kilometers is also faster than Zabriskie, but 20 seconds down on Savoldelli. At the finish mountains leader, Leo Piepoli gets caught by Parra (Cofidis) which must be a little embarrassing!

At the 29 kilometer mark Cunego is 38 seconds up on Simoni and could be on the podium to night, Mazzoleni catches Ricco and goes second fastest, 36 seconds slower than Savoldelli, as we see Savoldelli’s daughter congratulating her fast father at the back of the podium, as he says the usual stuff to the TV, contented with the day and this Giro and pleased for Mazzoleni etc. 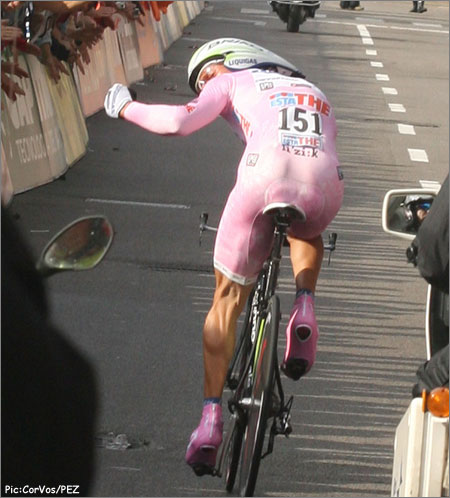 The roads are drying now fro the top four riders to come in to Verona to decide this years Giro d’Italia, Simoni has done enough to save his podium place from Cunego as he has only lost 27 seconds to Cunego, but has lost it to Mazzoleni who thrashed them both and takes second on the stage and third overall. Schleck rides well within himself to stay in second. Danilo Di Luca comes in with one fist in the air as he knows he has won the Giro, kisses from the wife and another presentation, this time he gives the Champagne to the fans; it’s only the formality of tomorrow to go. 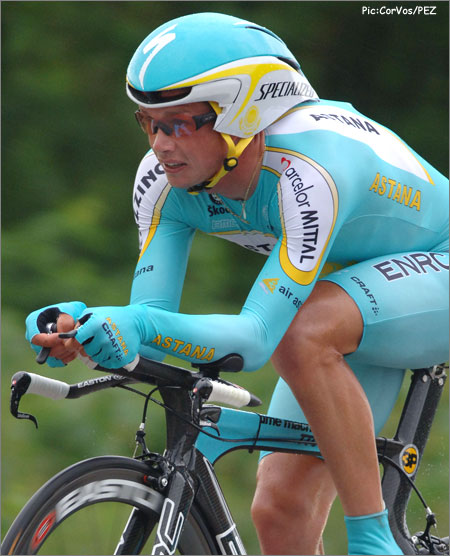 That was an incredible ride from Savoldelli…he’s shown himself a good TTer in the past, but a Dave Z beater? Excellent.