Today is the last day on the most beautiful Italian island of Sardinia, the stage of 181 kilometers starts in Barumini then wends its way south and east to the coast then across to Cagliari for a cobbled finish, possibly not suited to the Petacchi lead out train, but it’s a long power straight which should give Ale-Jet a perfect stage finish.

The World Champ’s daughter makes sure papa gets to the start.

There’s a bit of a climb from the start to the 25 kilometer mark and a small group of hopefuls tried their luck, Pinchot (Bouygues) and Ignatiev (Tinkoff) started off at 4 kilometers out and were soon joined by Buffaz (Cofidis), Visconti (Quick-Step) and Aggiano (Tinkoff). Riding at an average of 40 kilometers an hour over 60 kilometers these early heroes had just over 7 minutes in hand on the Liquigas lead bunch. Good news for crash victim, Charlie Wegelius who lost one and a half minutes yesterday, he has been given the same time as McEwan, so he is still in 4th overall position. 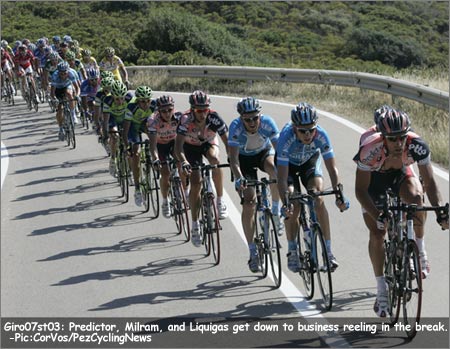 Visconti (Quick-Step) and Ignatiev (Tinkoff) decide to go it alone on the undulating roads with still 50 kilometers to go to the finish line in Cagliari. Bit of trouble from protesters about oil as Di Luca goes back to his team car for some words of encouragement. The two away have a gap of over a minute on the three others and 5 minutes on the main bunch, but the gap is coming down all the time as Visconti and Ignatiev ride along by the sea – not many sunbathers today though. Behind it’s Liquigas, Milram and Predictor doing the work to bring them to heel.

Smooth roads over a little climb with 35 kilometers to the finish and the two escapees are looking good with 4 minutes and 20 seconds, but it must only be a matter of time before its one big heaving bunch bearing down on Cagliari. 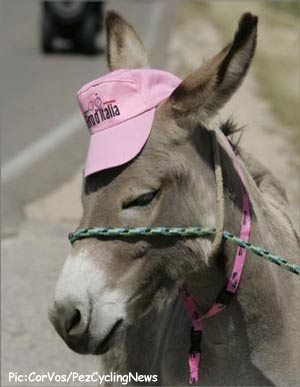 The excitement is building as the leaders are losing enough time to get caught before the line, the RAI TV producers are possibly getting bored as they show a donkey wearing a pink hat, well we haven’t seen any “Babes” on the beach so comedy animals are always popular. At 20 kilometers its 3 minutes advantage and the three others were caught a long time ago. These two are young and have a great future, but not today, Ignatev has been junior and under 23 time trial world champion and Visconti won the Copa Sabatini in 2006, both are riders to be watched, but maybe today was a bit too adventurous. 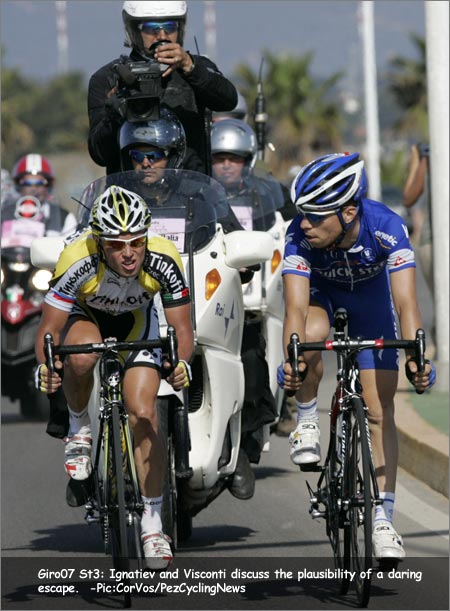 So another sprint finish today is on the cards, who could we put our money on? McEwan and Petacchi, obviously, then there is Bettini, Graeme Brown, Hincapie, Forster and possibly Haedo for an outside bet.

Along the beach front the Milram train is starting to get up steam, stretching the bunch to a long thin line, a wave goodbye from Visconti as he gets caught as team mate Tossato jumps away at 3 kilometers out. 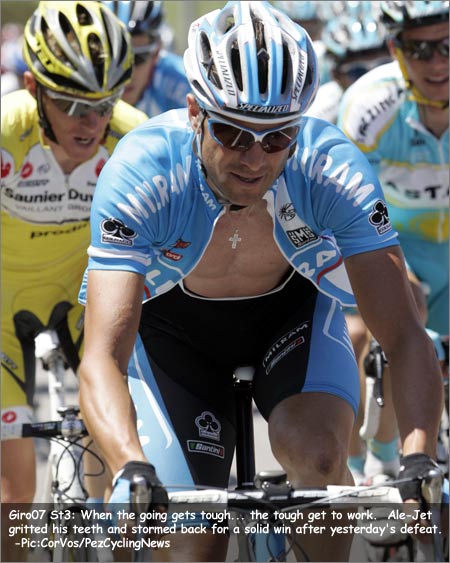 CSC, Rabobank are now mixing it with Milram as the road narrows, the last kilometer and Roche tries a long one for Credit Agricole as a crash for his team leader, Hushovd splits the bunch. Milram are not in control as they hit the cobbled section, Petacchi goes to the front at 400 meters out and rides hard, very hard and no one can get past him. 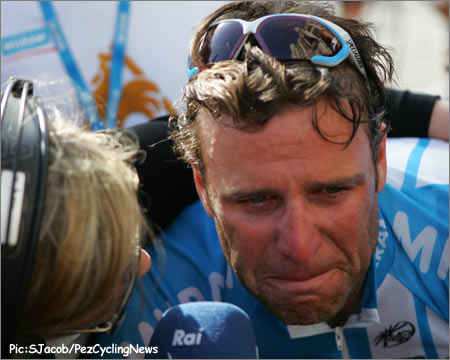 Tears for Alessandro at the finish, he can’t believe it, a very emotional win for the big man, he thought it would never happen again and now he is back a winner. 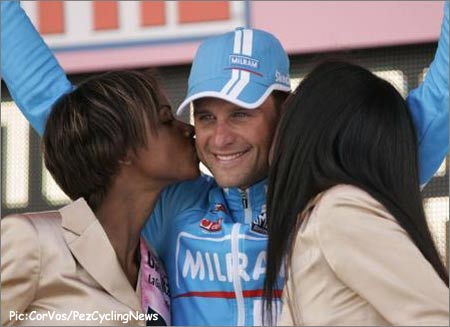 McEwan was fourth behind Forster, today he didn’t have the power of Ale-Jet. Gasparotto gets the Pink jersey back; don’t think Di Luca will be laughing!

It’s a rest day tomorrow and it’s everyone over to the mainland for stage four from Salerno to Montevergine.