The hero today, and it’s a little harsh to say this, wasn’t the fastest man across the line. We’re giving a cheer to the main animatore of the day – once again, Mikhail Ignatiev was off the front and flying the expensive colours of Mr. Oleg Tinkov.

Ignatiev took off with Mickaлl Buffaz from Cofidis, just inside of 10 miles into the race – that’s around the 15km mark for those of you who’ve so recklessly gone metric! The pair built a lead, but not a major one. It looks like the gruppo have got wise to what the Russian is capable of so they’re not letting him get too far out of sight these days. 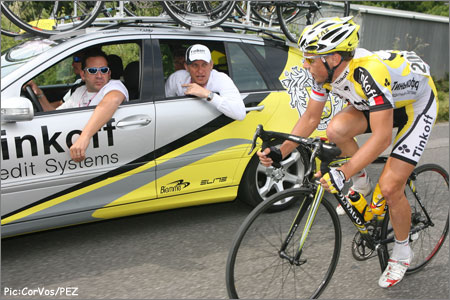 This is bordering on crazy – if it ain’t Brutt, it’s Ignatiev. If it ain’t Ignatiev, it’s Brutt – every single day so far! Impressive.

The lead maxed out around the five-and-a-quarter minute mark, and then gradually eroded over the gently rolling course. It looked like there was some sort of accord in place – Buffaz was working his posterior off and taking the intermediate bonuses with ease in exchange for his toil.

Then with the gap melting to three minutes, Ignatiev left Buffaz behind – still with 60kms to go. A lot further out than he went from the win the Trofeo Laiguelia earlier in the season, but if you’ve won multiple World and Olympic gold medals, I guess you can be reasonably self-assured when it comes to attacking! 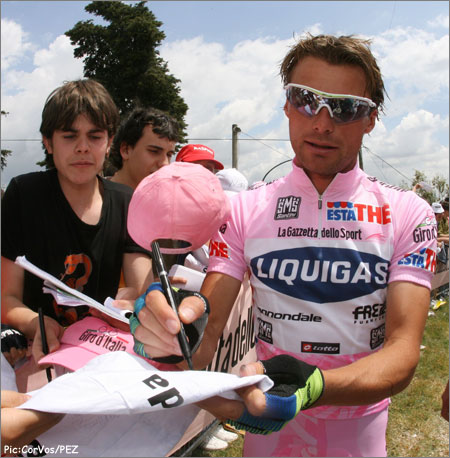 With so many breakaway kilometres in this Giro, from ‘Misha’ and his equally, preposterously talented team-mate Pavel Brutt, Tinkoff Credit Systems is suddenly looking like a pretty handy investment from the bike-loving oligarch. Especially now that he’s benched some of his more questionable signings.

Ignatiev continued, like a mayfly dancing before its strength deserts it. Saunier Duval were helping Milram, Lampre and Predictor-Lotto bring him back, probably to make sure Ricco was in with a shout if anything chaotic unfolded on the final climb of the day, La Macere. 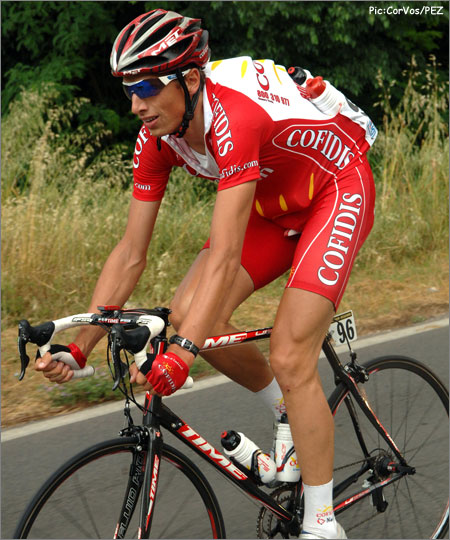 To keep himself occupied, this Cofidis rider tried to find out just how many bottles he could possibly carry…it was more fun than counting down the seconds to the finish.

The heroics were over when the field caught Misha as they hit the climb. T-Mobile’s Rabon zoomed straight past, before Ricardo Serrano re-established a Tinkoff presence at the front with Sella (Panaria).

Further flurries of activity included yet more Tinkoff men –firstly, Salvatore Commesso. Then, more dramatically, Elio Aggiano took off as Milram tried to make sure things were organised for the sprint. 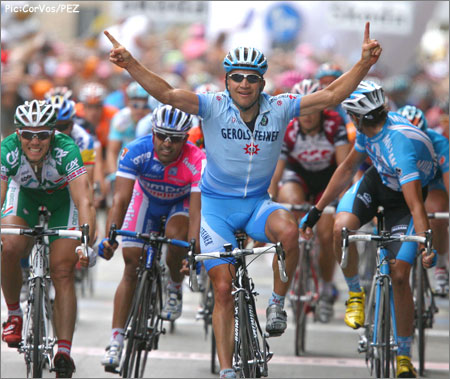 Aggiano lasted just over two kilometres, before Milram shut him down at the red kite. The boys in light blue pulled Petacchi through for the sprint, but he got himself caught on the barriers by Panaria’s Max Richeze as the road bent in and out in a very tight finishing straight – maybe he should have paid more attention to the road than to wrestling with Richeze?

It left Peta’ livid, but the win went to Gerolsteiner’s Robert Forster who came spearing through the middle ahead of a hugely improved Thor Hushovd, with Petacchi – one day fitter, stronger and angrier – in third. Hope he won’t go picking any fights with the bus tonight.

The sanguine Robbie McEwen just stopped pedalling as he could see no way through the soup of riders. He knows, with his condition, that more chances await him.

Giro Di PEZ: On The Mountain With PEZ