Norway’s Kurt-Asle Arvesen has had pretty hot form rolling into the Giro this year – second at Henniger Turm and winning the GP Herning. So it’s great to report that another Pez fave has nabbed his second career Giro stage win. And the very day that I decide not to stick any Euros on him, he wins!

The CSC opportunist edged none other than World Champ Paolo Bettini with a gloriously timed late surge after a monster escape group started attacking each other in the last few kms of the ride to Fiorano Modenese. 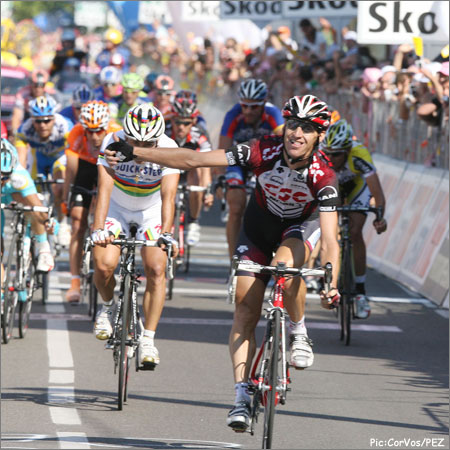 It’s been four years since Arvesen last took a Giro stage – and it was a fine return to the top step with a thrilling victory over Bettini.

In a whirlwind of attacks, chases and counter-attacks, Emmanuele Sella looked to be heading for the win after escaping inside the final 1000 metres. With 400 metres to go, Bettini gave it everything he had to overhaul Sella. As Italy waited to acclaim a Giro stage win by a home hero in the rainbow jersey, Bettini looked right to see Arvesen edging past.

As Kurt-Asle sat up to celebrate with a huge grin on his face and a thumbs-up for the fans, Bettini’s expression could be easily deciphered … even as he rolled over the line with head hung like a dog caught stealing the Sunday roast. 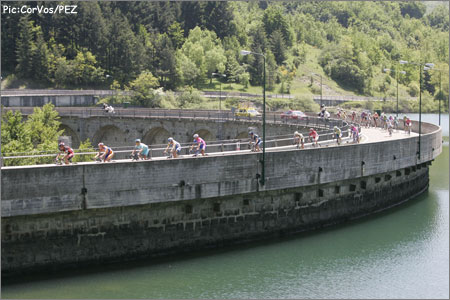 It was a great ride from Arvesen, who played his cards perfectly. Outnumbered in the break by other teams, he made the smart moves when it counted, and gauged his energy reserves to hit the line in front.

It was a breathtaking finish to a fine day’s racing, as the field ploughed past the testing track of the world famous Ferrari motor company. Today was a lot more exciting than most of the last few years of Formula 1 has managed, so maybe the Ferrari chiefs were taking note!

There were a few lumps and bumps on the course early on. The seemingly innocuous lump of the Passo della Futa was enough to see Petacchi, McEwen and some of the other sprinters off the back. They eventually crawled in over 20 minutes behind.

Pez diarist Dario Cioni was in full effect helping to set the days events in motion. He prompted the first big break, numbering over 20 riders. By the midway point of the stage, the lead was over 5 minutes. 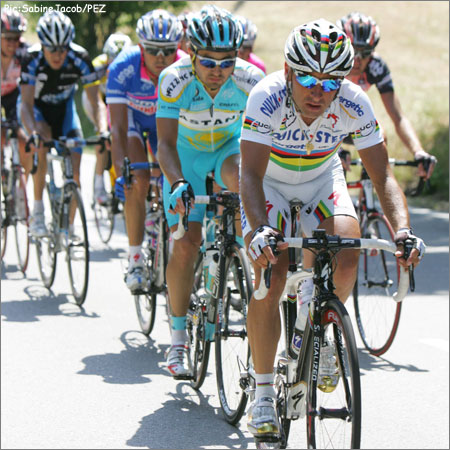 Paolo Bettini looked great all day, but just missed out on the win on the line.

Liquigas had placed key men in the lead group – Noй (who was seriously threatening to grab the maglia rosa) and Spezialetti. Lampre had three men; Astana had a couple; there were two Disco’ boys – Hincapie and Rubiera; and representation from CSC (Arvesen); QuickStep (Bettini), Euskaltel, FDJ, Predictor-Lotto, Rabobank and ….. drum roll … Tinkoff – Pavel Brutt and Evgeni Petrov reporting for duty today

With so many teams involved in the escape, and such horsepower, the split was definitive. T-Mobile needed the major help of Saunier Duval to prevent some sort of GC meltdown, and Marco Pinotti must have been at least a little worried to see Noй’s lead stretching out towards seven minutes. 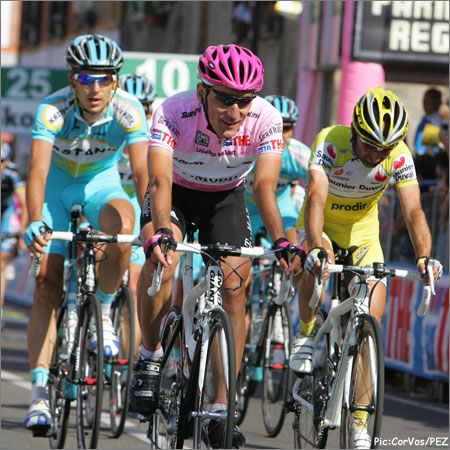 Whew, glad that one is over…that was close.

At the finish, he hung on to the pink jersey, but not by much. Liquigas might not plan to take it off him in the next few days, as they have bigger fish to fry in the final weel. But you can be sure, that if the opportunity arises, they’ll have no hesitation on grabbing it if they can.

Definitely getting grabbed tonight, by the short-and-curlies, will be the Lampre trio of Villa, Bruseghin and Marzano – three from the same team in the escape of the day and they could only manage 12th, 17th and 19th. It won’t be a happy tea-time at the Lampre hotel … ouch.

Keep it PEZ for all the top Giro coverage!