Once again, the Giro proves that it is THE finest Grand Tour with another thrilling day of epic racing. Ricardo Ricco is no longer a superstar-in-waiting; he’s made it with a glorious stage win on Tre Cime Di Laveredo. Behind him, the race for the maglia rosa took another wild twist thanks to a brave attack from Eddy Mazzoleni, catapulting the Bergamasco up to second overall!

It was a day of pain and tears as the riders picked their muscle-searingly pained way over the Passo San Pellegrino, the Passo Giau, the Passo Tre Croci and the final beast – Tre Cime di Lavaredo with a ferocious 18% section of torture.

As seems pretty normal for a stage finishing up Tre Cime Di Laveredo, the weather was miserable – cold and wet, even some snow falling – which just added to the sense of brooding drama. 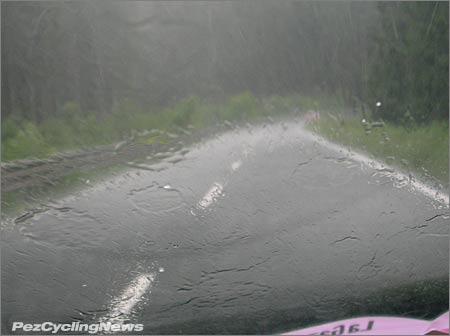 PEZ Sez: The weather today was just awful. The rain was coming down so hard at the start, that visibility was almost zero from the car. 52km in on the climb over San Lugano, those gigantic splats on my windshield turned to hail.

A rapid start to proceedings saw a big escape group form then super-nova to bits. Astana and Saunier Duval had the extra aces hidden in the deck today, as the front of the chasing peloton saw Piepoli and Ricco (Saunier) forcing themselves clear with Ivan Parra (Cofidis) and Julio Perez Cuapio (Panaria).

These four caught and dropped the original escapees (including world champ Bettini) and pressed on in the lead. 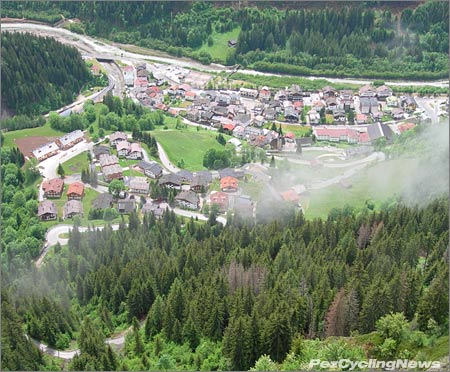 PEZ Sez: Here’s the town of Caprile at the base of the Colle Santa Lucia, which leads to the Passo Giau. I drove the corsa today and these climbs are steep… and l-o-n-g.

Behind, Liquigas were blowing themselves up for Di Luca, but once Wegelius had done his usual outstanding job as a mountain super domestique, the leader was isolated. Cunego was also on his own as both Bruseghin and Patxi Villa were dropped, along with yesterday’s stage victor, Garzelli.

Meanwhile, Astana’s Paolo Savoldelli was doing a sterling job on the front of the ‘gruppo maglia rosa’ – was he feeling better or planning something?

He was setting up Mazzoleni, dragging his new team leader clear of Di Luca, and leaving him safely with dropped front-runner Michael Rasmussen. The gap back to Di Luca started to grow and the race leader was getting very twitchy for the second day in a row.

Not as twitchy as Schleck (CSC), as the youngster needed to get his ass in gear with Mazzoleni threatening his current podium place and Ricco closing on the white jersey. 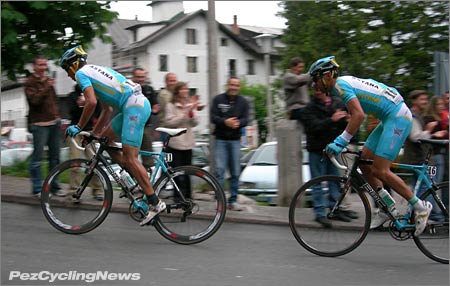 On the Giau descent and through Cortina, Savoldelli buried himself to get Mazzoleni away from the Di Luca bunch. He blew soon after this, but his work paid off.

‘The Killer’ was trying to use his menacing stare to get his chase group colleagues to pull in the effort to limit the time gap, but no-one was willing to help. It was up to the ‘Maglia Rosa’ himself to work.

Mazzoleni set off alone. Although he didn’t seem to be making too much headway on the front quartet, the gap to Di Luca was stretching out all the time. 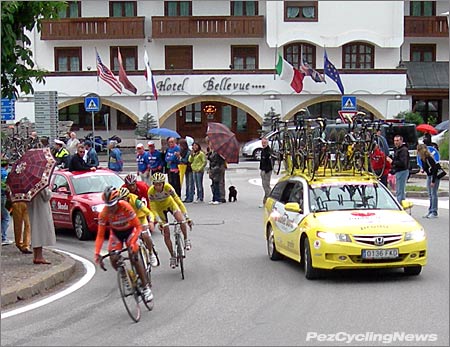 In the resort town of Cortina d’Ampezzo, the break hits the first ramp of the Passo Tre Croce.

Once we hit the final sections of Tre Cime di Laveredo, in the pink jersey group, Cunego slammed the accelerator down. Di Luca, then Schleck and a slightly struggling Simoni ground onto his back wheel.

A couple of moments later Di Luca attacked … HARD! No sooner had Schleck tried to catch him, than Simoni slipped past attempting to stay in touch with Di Luca. But it hurt him badly as he tried to close a gap of just a few metres! This was another terrific display of climbing power from Di Luca.

Simoni was close but started losing ground, as Di Luca started hammering another nail into his rivals’ coffins on this race.

Up at the head of things, Piepoli and Ricco were playing the two-versus-two game, using their advantage in numbers to try to keep Perez Cuapio and Parra under control – the thinking being that Ricco would be the quickest finisher in a sprint.

In fact, it was Parra’s attack that did for Perez Cuapio with one kilometre to go, but it also finished him off, too. Ricco and Piepoli got up to him … Piepoli launched his finishing burst with 400 metres left; Parra was gone, and Ricco came through in an agonisingly painful ‘sprint’ for the win.

Crucially, Ricco takes the time bonus in the race with Andy Schleck for the ‘maglia blanca’. (Go and check out the message boards … within seconds of the finish, La Gazzetta dello Sport had posting proclaiming “Ricco and Schleck are the future of world cycling!”)

Ricco now sits high on the overall, meaning that Saunier Duval (i.e. Simoni) has a key card to play in the last week, especially on the Zoncolan.

Keep it Pez – we’ve got a rest day tomorrow, but we’ll have all the finest coverage right here for the final stages!