It’s a beauty of a day along the most beautiful stage of the Giro. While the corsa skirted the hills high above the fabled Cinque Terre, we took a side trip to the azure waters of these tiny villages tucked into the rugged and spectacular coastline, and as always, sampled the local fare.

Some ’Splainin To Do
Before we begin today’s Giro adventure, we need to do a little ‘splaining. We arrived here at our hotel in La Spezia very late last night, after the journey from Reggio Emilia, including the ride over the Passo del Ceretto. This in itself is not unusual when chasing a Grand Tour. After emailing our story and photos to the PEZ worldwide HQ, it was nearly 10:30pm when we finally started our search for dinner. Again, not that unusual.

The only restaurant open in La Spezia at that hour was a little family-run place called Ristorante D’Angelo. Mario and I were the last patrons of the day, and Rosanna and Ivana took care of us like we were family. 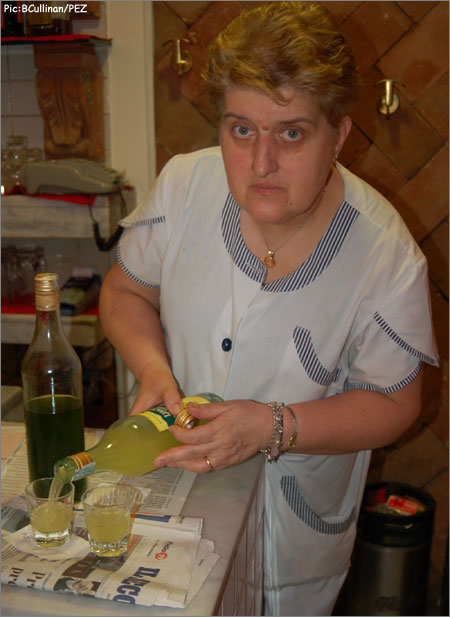 Limoncello – served ice-cold is an Italian tradition between courses, or as a satisfying end to a great meal.

After a great meal of lasagna and insalata misto, Rosanna treated us to a couple of Limoncellos. [Say: lee-mon-chello] It’s a local after-dinner specialty, a hard-core, high-octane mix of lemon and spirits. It’s best taken in small doses…not the full-pull shots that Rosanna poured for us. 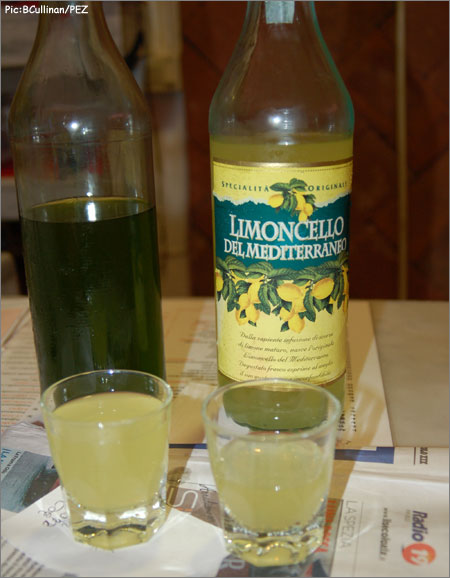 And if that Limoncello is a bit strong, you should try the concoction on the left. The deep-green aperitivo is made from bay leaves, and tastes kinda like a mixture of cough syrup and balsamic vinegar. But after a couple of shots, you just don’t care.

[PEZ Sez: Hmm, that sounds like every one of my days on the race…]

So that’s our scene-set for today… possibly the most beautiful day of the Giro, as the peloton winds it’s way thru the Ligurian coast, along the Mediterranean, past the legendary Cinque Terre, up to Genova, with the mountain-top finish at the Santuario Nostra Signora Della Guardia. 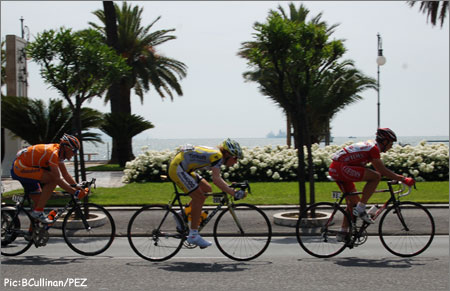 After Monday’s late-night Limoncello-fest, we were lucky to get up in time to meet the Giro leaders as they cruised past the waterfront in La Spezia. But seeing the lead pack in the mid-morning sun makes all the effort worthwhile.

The official route of the Giro skirts the Cinque Terra…the “five lands” that cling to the coast, connected only by a train line and a dirt path. 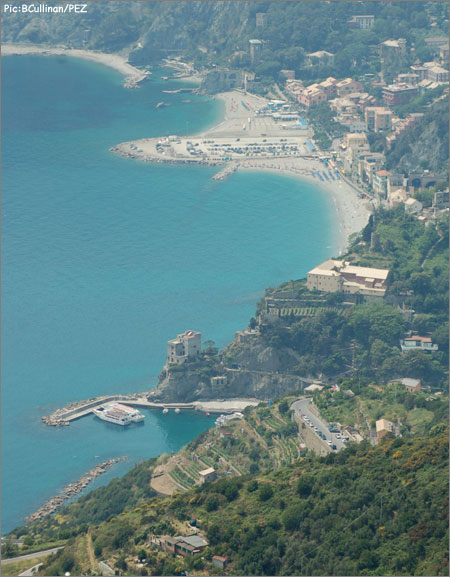 There’s no direct road between Monterosso, Vernazza, Corniglia, Manorolo and Riomaggiore, so the peleton saw this view from the hills above Monterosso as they passed just to the east of this magic land. The Giro riders only got a small taste of the Cinque Terra… but we offer the full menu. 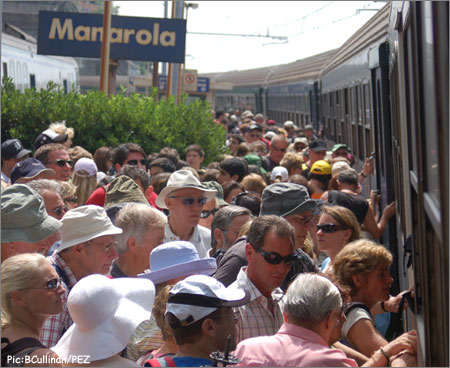 Along with a gaggle of tourists, mostly German, we piled into the train that runs the route from La Spezia to all five of the Cinque Terra towns – much of the track through tunnels.

Our goal was to make it to Monterosso on the train, then bike up the hill to the road that was part of the Giro route. But we hadn’t counted on two things…first, trains in Italy are always late. Get used to it. And, the climb out of Monterosso is epic. It’s only a little over 4km, but you gain nearly 1,500 feet before you hit the highway. 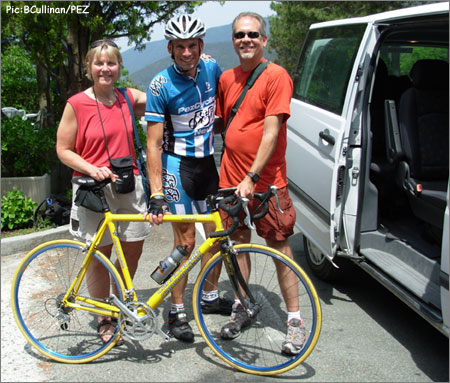 By the time we reached the road, the Giro was long gone. But a few Americans still lingered. Dan and Gina Suomi of Olympia, Washington are spending a week in Italy before beginning a beauty of a bike tour next week. They wouldn’t miss a chance to see the Giro. Dan told me, “The people are so passionate about everything here, especially cycling. And to be with Italians, watching an Italian bike race, is just to die for.”

You want a view to die for? This, my friends, is why we come to Italy to see the Giro. 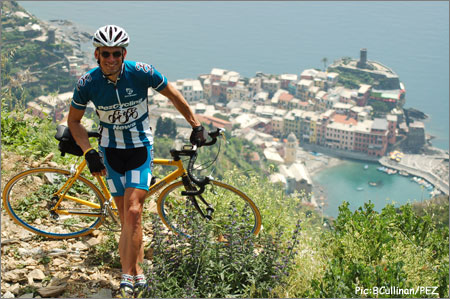 This is the view from the hills atop Vernazza. Take a good look. I’ve never seen anything like this in the rest of the world. 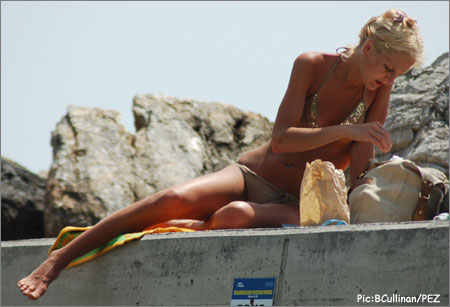 And the view from the bottom ain’t bad either.

The Cinque Terra is one of Europe’s great getaway spots. You’ve got it all here…the ocean, the hills, the food…you’re never at a loss for somewhere to go, or something to eat.

We met-up with Valario, one of the locals here in Vernazza, and big fan of the Giro. 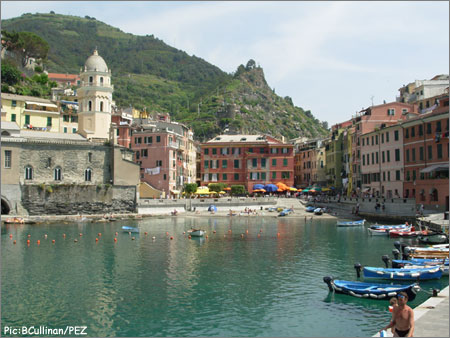 Valerio lives in one of the apartments on the right, with a full-on view of the harbor and the hills.

He got up early today, and trudged up the hillside to the highway to watch the Giro go by. For him, the bikes were good… but the battle among the team support cars was better.

“The cars are fighting to be as close as they can to the bicycle racer. And it seems like a rally. That was, for me, the race.” He confessed that he was a big-time Marco Pantani fan, but now he’s turned his allegiance to Davide Rebellin.

Valerio directed us to a little restaurant in his home town. “U’Tian” is a block or two off the waterfront, so the prices are good, and the food is great. 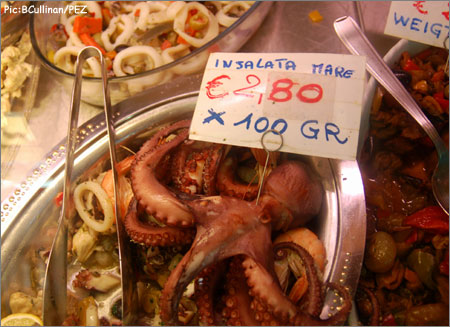 We passed on the octopus at lunch, and settled for something a little more tame…riso misto… Italian rice mixed with various meats and veggies…and half of a baked chicken.

But there’s nothing half-baked about today’s adventure. If you ask me, we got the better part of the deal today. The Giro racers just passed by the Cinque Terra. We were able to spend some quality time here, and show you what it’s like up-close.

We bid arrivederci to Vernazza, Monterosso, Corniglia, Manorolo and Riomaggiore. The PEZ-mobile hits the road for Pinerolo tonight, where the next adventure awaits.