Our crack week 1 PEZ-Crew of Ed Hood and his trusty driver Dave set out on a bitter sweet journey this morning – on they’re final day of our week 1 coverage, their quest was to find the spirit of the Giro on road to Spoleto. A lot of nice people and a little vino seemed to do the trick…

It’s stage six and the Giro continues its march-north, by-passing the capital with Spoleto as the destination. There are a couple of heavy duty climbs today and it looks like a grupetto day for the sprinters; let’s go-see.

The early kilometres are the usual, twisty dusty little roads through small villages – the ones the riders don’t like; potholes and dogs lay in wait in places like these. You can’t relax for a moment on these roads and just ‘go with the flow’ in the bunch. The views are wonderful though, out across the plains and up to hill top villages.

“Solo tre euro!” What the heck is that? It’s another tee-shirt van, hot on our tail, loud speakers still blasting, even at 80 kph. Dave pulls-in to let him pass, those guys are on a mission!

An autoroute is an autoroute, but if you drive the stage routes you realise that southern and central Italy are very much agrarian economies; very little industry, few towns and everything is green – forests, olive groves, vineyards and pasture land. 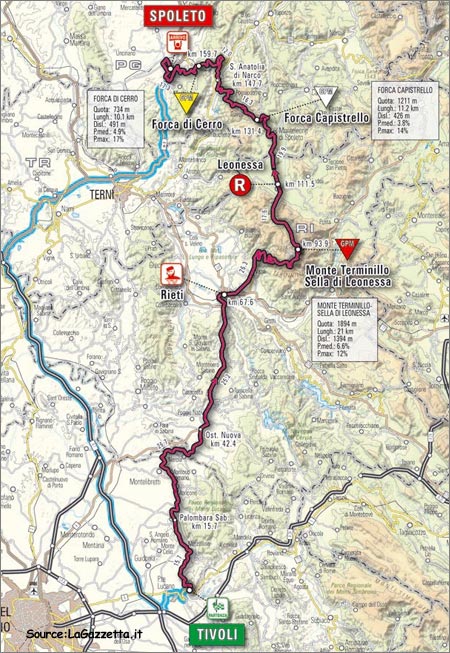 Start at the bottom – and drive to the top

The 125 K sign comes half way up a long drag and the big climb is getting close as we run through long tree-lined avenues and past the ‘Garibaldi’ intermediate sprint.

Let’s Go Uphill Shall We?

The climb just starts – bang! Up it goes, wide, well-surfaced and not too steep initially.

The locals are impressed by the official race bible…

Pian de Rosci, one third of the way up, we let a couple of sportivo riders see our race guide, in return we must have some vino with them; this job just got better!

… and show their appreciation by inviting us for a toast.

Dave drags me away from my new buddies – onwards and upwards.

PEZ-Fans!
Wait a minute: matching ‘his and hers’ Airborne titaniums – “are you guys American?” I holler out of the Lancia window. Those Pez-readers are everywhere – Garry and Kecia Dilday are from Virginia back in the US of A. Garry used to race back home but has a job in the US embassy in Rome now. They are big Giro – and Pez fans; keep up the good-work guys.

Still we climb, Terminillo, the village that gives the climb its name and the team cars whizz past en-route to the feed zone.

It’s Getting A Bit Nippy
Nearing the top, the car computer says 5 degrees and dropping, there’s snow beside the road and it’s blowing a gale; with that wind-chill it must be heading for freezing. The publicity girls have to do their stuff though as the Liquigas song blasts-out and echos off the rock faces.

A racing cape will be a ‘must’ for the hairpinned descent which drops sharply away from the summit, the surface isn’t the best either with road signs warning of loose gravel and unfenced bends – very technical. I wouldn’t want to follow ‘Savo’ down that one.

There’s the feed, 60 K or-so to go, ever wondered what’s in one of those musettes? The guys from Astana very kindly, let us see.

The descent gets less technical and the gradient eases but it’s still predominantly downhill. Determined chasers would chew a lot of time back on these roads.

Ok, Up Again
The next climb, Forca Capistrello – and in sleepy Monteleone di Spoleto we stop to let the pulicity caravan past. It’s a real assault on the senses, the horns blow, the loud speakers blare as the giant sun glasses and pizzas whizz past; the kids ogle.

It’s much friendlier here than it was in the south and for the first time we wave and toot the horn as the roadside fans smile and cheer at us.

It wouldn’t be Italy without friendly fans… and scaffolding.

[PEZ Sez: Did you hear about the Italians climbing Mt. Everest? They only made it to 20,000 feet before they ran out of scaffolding… ba-dum!]

It’s amazing the reaction to a simple media sticker in your windshield.

The climb isn’t as much of a killer as Terminillo, but it’s no breeze either. The tee-shirt guys are frenzying, they must be down on target.

We stop to take pictures of some guys spectating from a box van; we have to have a drink with them – of course!

It wouldn’t be Italy without friendly fans… and scaffolding.

Heading To The Final Climb
It’s another corker of a descent, not as technical as the last one and better-surfaced but not for the faint-hearted either. It’s also very long and again an opportunity for the ‘crazies’ to regain lost time.

Climb three, Forca di Cerro rears-up at 30 K to go – it’s another toughie. Hairpins and steep gradients then a dip before getting serious again. Narrow, rough, steep and hot as the sun puts in a late appearance. There’s a fair crowd at the top, then it’s technical time again – new brake blocks all-round tonight – as gravity does its thing. It drops all the way to the finish town of Spoleto but with 1500 metres it starts to drag – all the way to the line. There’s a lovely view of the old castle above the town as you come into the finish; but I guess the guys won’t notice.

There’s the line, it’s Dave an my last stage and time to go home; but it’s not so bad – we found the real Giro today. PEZ-Man Bob Cullinan picks our roadside action on Sunday – so keep it dialed to PEZ.