A wise old cyclist once wrote a book and told us “It’s not about the bike.” He must have been talking about the Giro d’Italia. At this race, it’s all about the people… meet the cast of characters from Stage 9.

The stage start in Reggio Emilia looked more like a carnival than a bike race. To say it was loose is a big-time understatement. 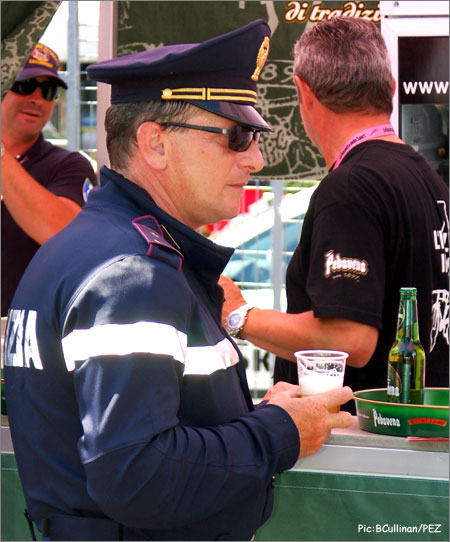 • You know it’s gonna be a good day when the first Polizia you see is drinkin’ a beer…at 11:00am this morning. 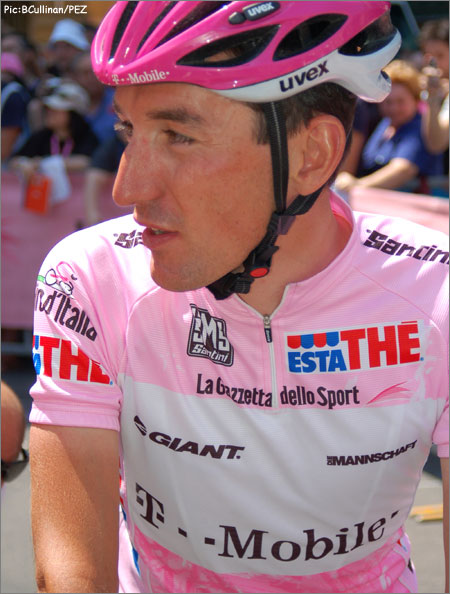 • The happiest guy in the bunch this morning is Maglia Rosa master Marco Pinotti. If you recall yesterday, Marco had a major malfunction with the champagne bottle on the post-race podium. He missed the crowd, and sprayed himself right in the face. But he told us this morning that he was lucky… the cork didn’t hit him. “No, no, no…it was OK…it missed me. The cork was just little bit loose, and as soon as I touch it, it exploded. But just the champagne hit me. I feel very lucky.” 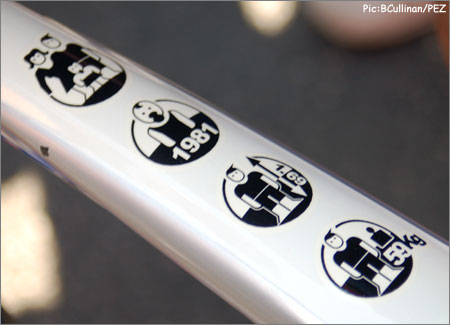 • The Italian Prince, Damiano Cunego, had his good luck charms right there with him on the frame of his bike. 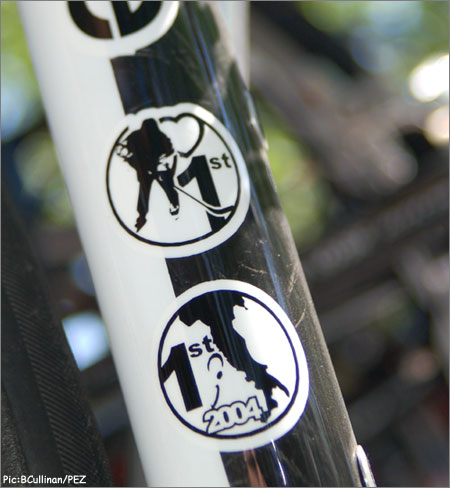 • Check this out… the first icon is for his family… then the year Damiano was born… then his height… and his weight. On the down tube…Damiano reveals that hockey is his first love…and he reminds us that he won the Giro back in 2004. 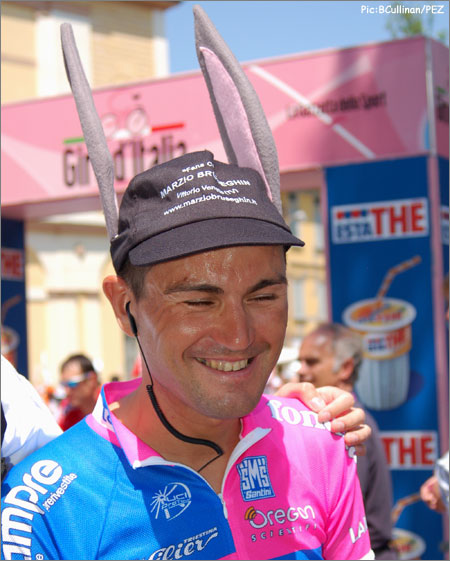 OK, let’s get serious for a second. Ladies and gentlemen… 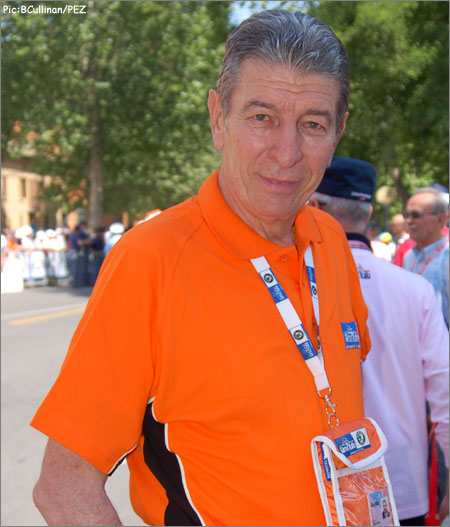 …all please rise for the Great Gimondi. Three-time Giro champ Felice Gimondi. He finished on the Giro podium a record nine times, and he looks like he could still give it a go. 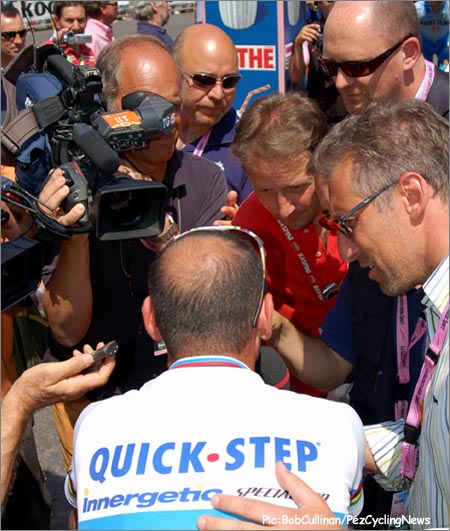 • Poor Paolo Bettini. He’s never won a Giro championship, and he has yet to win a stage this year. But he’s still mobbed everywhere he goes. This is part of daily ritual at both the start and finish of every stage. Bettini is mobbed by the Italian journos, looking for any bit of inside-info on Italy’s favorite son.

OK, this got us inspired. After seeing Bettini and Gimondi, we decided to challenge the day’s Gran Premio Della Montagna, the climb up to the Passo del Cerreto. It’s just over 10km long…it can’t be that tough, right? 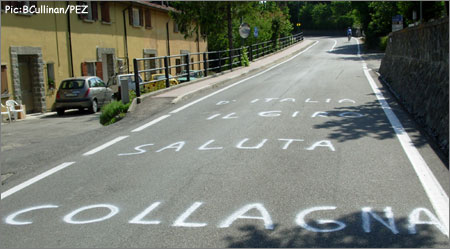 • The climb starts in the city of Collagna. About an hour before we hit town, the Giro peleton rolled through here and the whole village turned out, along with a gaggle of guests. Alberto, one of the locals told me, “There were a lot of people here today. Of all these people, maybe 1% will come back again, and that’s enough for us. Better than nothing. We like the Giro.”

But we weren’t real happy with the first part of this climb. In the first half-km through town, it kicks up pretty big, over 10%. Then it drops down for the next 1km, but after that, it all up…and up…and up. 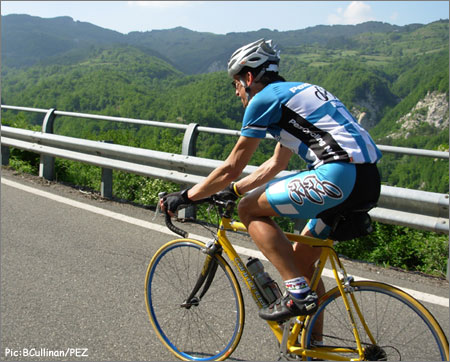 The total elevation gain…more than 1,400 feet, in just 10km. It took just about 42 minutes for Marco, my trusty driver/translator and I to make it to the top. How slow were we going? Well, let’s put it this way… the flies were keeping pace with us in the last 1km before the top. No kidding.

Keep in mind… this was an e a s y climb for the pros, but it was a knee-busting slog for us. Major respect goes to the guys who can actually race up something like this. They make it look easy…but it is sooo hard.

Just wait until they get to the Col d’Izoard on Thursday. 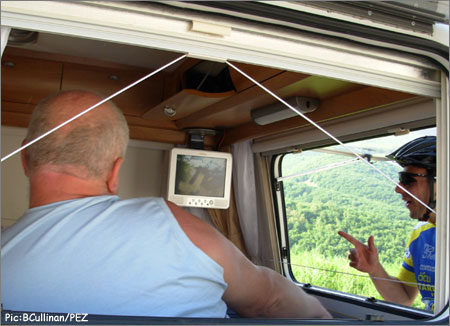 On the way down from the Passo del Cerreto, we ran into one of the real characters of the Giro. Walter, a big-time Belgian bike fan, drove all the way up here in his camper van… complete with generator, satellite dish and flat-screen TV. 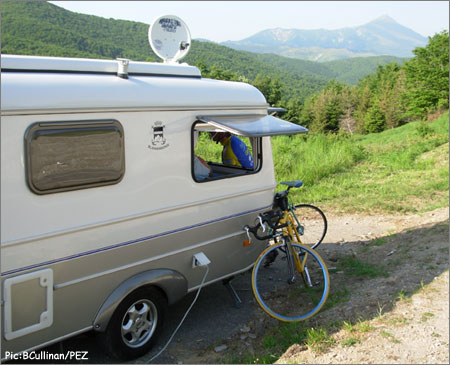 He invited us to watch the rest of the stage with him, so Marco and I camped out on the side of the road to catch the last 20km. It was pretty cool to watch ‘em sprint into Lido di Camaiore, knowing that they were on this same road just a few hours earlier. 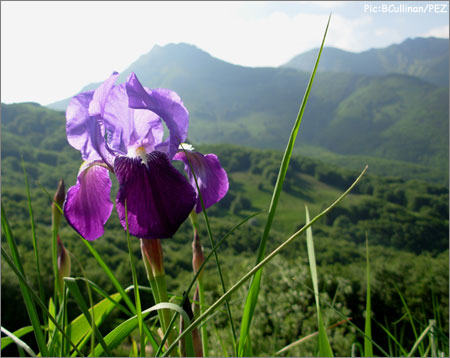 And so ends another day at the Giro. A real cast of characters, some great riding, and scenery like no place else.

Tomorrow, the riders will skirt the legendary Cinque Terra, and we’ll show you the places that they might miss on the way by.