With less than a day to the start of the season’s premiere Grand Tour – both riders and fans are ready for a great race. The people behind the scenes are as important as the riders themselves – so PEZ talked with the ‘capo di capi’ – the top man at RCS about the Giro, SanRemo, Lombardia – and cycling. Here’s how it looks from the top…

Signor Angelo Zomegnan, the Director of cycling events at RCS, is one of the most important managers in the cycling. To speak with him gives the opportunity to have direct answers about cycling matters and about the way to take in the future. “Good evening Director, I’m Alessandro Federico, from PezCycling News”. It’s seven o’ clock in the evening when Mr. Zomegnan answers to my call for a ten minute interview. At the end I will be surprised to have spent more than half an hour speaking with him. It looks like PezCycling and the Giro management have the same ideas about the cycling promotion and the background. Just one regret. I didn’t find the words to ask to him about the daily distractions! 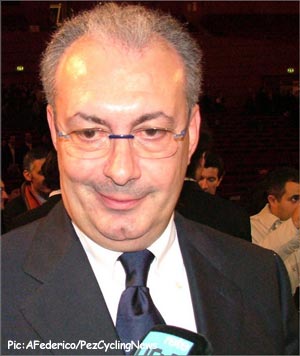 Pez: Can you tell us something about your career? How did you reach your actual position?
Zomegnan: I started in the 1979 as free lance; today we call it free lance but that time was something unofficial. Let me say that it was something illegal.

Pez: Back to your past, has been there any particular success in your career you would like to remember?
Zomegnan: Yes, there’s been and I always gladly remember them. I remember one of the most important successes of my career was an exclusive interview with Carl Lewis before the Worlds in Rome (it was the 1987): During this interview Lewis announced that he was going to abdicate the 200 meters. We were the first to report about this. But I would like also to remember about that time when we were able to report about the funerals of Meazza (a great Italian soccer champion).

Pez: How did it happen?
Zomegnan: The family decided for a closed ceremony. All the journalists were convinced that it was going to take place in Santa Margerita Ligure (a small town on the Tyrrenian Sea) but we were in Monza (closed to Milan) in the right place. Finally the Gazzetta dello Sport car was the only one in procession that day.

Pez: And what about cycling scoops?
Zomegnan: I remember the interview with LeMond when he announced his retirement to us one day before to the others. But a special moment for me was also the first opportunity to interview the ex-Soviet riders once arrived in Italy for ride in the Alfa Lum. It was the 1988. That day we met for the first time Tchmil, Konyshev and all the others.

Pez: What does it mean to be the Director of the RCS cycling events and particularly of the Giro d’Italia?
Zomegnan: Once the man who covered my role was called “Patron” [a way to identify the father/boss of the event]. Today I cannot be called in this way. This is something to be left to Torriani (the Patron of the Giro since the 1990) and Goddet (the mythic Patron of the Tour the France). We don’t really have, as they had, the culture of this sport. They were, most of the times, forerunners and, sometimes, inventors.

Pez: And now?
Zomegnan: We are today focused on the overall management. The sport event itself is must be delegated to someone else; that’s why I’m well supported by Mr. Mauro Vegni who sits in the master car of the race.

Pez: What about you?
Zomegnan: Marketing and promotion are the main part of my work. These are key items for an organizer today. I’m also very interested in the media. Today’s world it’s much more sophisticated than ten years ago also from this point of view.

Pez: Are you interested in the internet media world?
Zomegnan: A lot. I’ve the luck to need just few hours for sleep and I love to rove around the Web. Especially the cycling webs.

Pez: Is the web an opportunity?
Zomegnan: The web is freedom, and sometimes too much freedom means confusion. I would like to advise the Web editors to control their news. But for sure it’s a very big half of promotion.

RCS VS The TEAMS
Pez: How to promote for instance Milano – Sanremo?
Zomegnan: We’ve done it and we’re still working on it. We organize, the following day of the race, an open race for amateurs both for Milano Sanremo and Giro di Lombardia. We introduced back the team presentation in the most crowded and famous place of Milan. We’ve shifted back the departure of the race to the Castello Sforzesco which is a great symbol of Milan.

Pez: Looks like that someone played against the Team presentation. That evening, I’ve saw you in the press room and you were very upset.
Zomegnan: The tension of that evening was justified. The evening before the Team presentation I received a message. It was written that not one Team was going to attend the event the day after.

Pez: We suppose that this is just a new chapter of the war between organizers, Teams and UCI.
Zomegnan: There is one responsible for this attempt of boycotting. He is Roger Legeay (sport manager of Credit Agricole) who tried, without success to involve all the Teams but as I told you that evening, that day the winners were that Teams who participated in the event in front of hundreds people.

Pez: We have the feeling that the people are tired about this story.
Zomegnan: The people understand that Classics, Giro and Tour cannot be objects of scorn by the arrogance of the UCI. From our side we tried to sit down with them but in order to stop this quarrel everybody should show the wish to stop it. We cannot accept a closed club of Teams without any chance of promotion or demotion because this is something against the sport culture. We still consider the individual performance of the rider more important than the Team performance. The day when the cycling will develop to a Team game it will die.

Pez: What are the results of your work for the Sanremo?
Zomegnan: As you know Mauro Vegni was sick the day of the Sanremo (a bad flu). For this reason Allocchio had to cover his position for the first time. I followed the race with him in the master car. Since so many years I didn’t see so many people along the route. A great show of people.

Pez: is it true that you’re planning to change the Sanremo route?
Zomegnan: Last Sanremo has been watched by more than 3 million people just in Italy. There has been a moment when more then 6 million in Italy were watching our race. This means that the Sanremo likes as she is. Something more, I have to say that this discussion about the route to be changed jumps out just when a foreign rider wins. Nobody complains, in Italy, when Petacchi or Cipollini win. This is something offensive for Freire who won as a great, without any help from his Team.

Pez: What about the Lombardia?
Zomegnan: We’ve rectified something important in the route. Every Classic has got its Moloch, let me call it like that. The Sanremo has got the Poggio, for the Flanders it’s the Muur, the Arenberg for the Roubaix and the Redoute for the Liege. This particular for the Giro di Lombardia is the Ghisallo climb. We cannot accept to ride the Ghisallo far from the finish. What we’ve done for the Lombardia in the last three years shifting the finish back to Como is very important.

Pez: This for the Classics. What about the Giro?
Zomegnan: The Giro gives the impression to perform well and to improve.

Pez: Which are the things strongest of the Giro?
Zomegnan: The Giro combines well the race’s stories, that are the most important part of the event, and the background. We believe that the promotion of our land can be helpful also for the Giro.

Pez: We also are exactly focused on this matter. We always look for the background in a race and to promote it as our work. Last year we received very positive reader response for our stories on the Saltara stage.

Zomegnan: Saltara candidacy come from the heart. That region spent more than 2 billion euro just to improve the roads. But we demonstrated that the remote countries are still the genuine part of the cycling. We’ve had good results as well also in the big cities. I remember in Genoa the ITT in the 2004 for the Giro depart in the middle of the downtown was very exciting.

Pez: What does it makes the luck of a Big Tour. The route, the starting list or the background?
Zomegnan: It must be a combination of everything but you forgot the weather. Last year half an hour later to the end of the race on the Plan the Corones there was the sun. The year before, on the Finestre, without the sun it should be impossible to proceed.

Pez: what about the Giro 2007?
Zomegnan: I feel that the TTT in La Maddalena will be fantastic. That’s a beautiful island. Then to the way of Montevergine, starting from Salerno we will be the witnesses of a cool passage on the Sorrento peninsula. Something breathtaking, something to see.

Pez: how to promote it?
Zomegnan: Last year we’ve done at our cost a DVD for total 103 minutes for the Chinese television and we’ve sent it to them. A recent survey shows that there are 70 million rich Chinese people interested in our country.

Pez: 70 million? More than the Italians
Zomegnan: True, more than us.

Pez: What about a wild card to an Asiatic Team?
Zomegnan: Why not? If in the future there will be a Chinese champion we could also decide to invite his Team. Do you see how important for us it is to maintain the control of our race? Because we know it and we know how to promote it. Do you really think that the UCI can do better than us for our Giro?

Pez: Last question. Which is the best experience you lived in these three years of Direction of the Giro?
Zomegnan: The day we came in Charleroi, in Belgium. I’ve seen many Italians, relatives of the Italians who left our land after the Second World war to find work inside the coal mines. We’ve felt how much is important the Giro and the Italy for them. A touching experience.