Giro Replay: Zulle Vs The Pirate

The squat man on the Pinarello monocoque is fastest, no question, there are only a couple of hundred metres to go past the palm trees on the Promenade des Anglais in Nice. It’s the 1998 Giro d’Italia prologue, seven kilometres out and back, pan-flat, nothing technical; just the light breeze off the sea and the lactic burn to worry about.

PEZ Sez: With Basso admitting his involvement in Operacion Puerto, it seems we’re on the verge of finally getting some answers to the latest doping affair, and his exclusion from racing likely means this year’s Giro will actually be a ‘race’. In 1998, we fans lazily dozed in a pre-Festina stupor, thinking all was good and right in the world of cycling. Alex Zulle’s fantastic meltdown in the Giro seemed plausible enough… we innocently accepted it as a ‘bad day’. But given what we know now about the prevalent training ‘techniques’ of the time, one wonders how many other riders suffered the same fate, and how many didn’t. 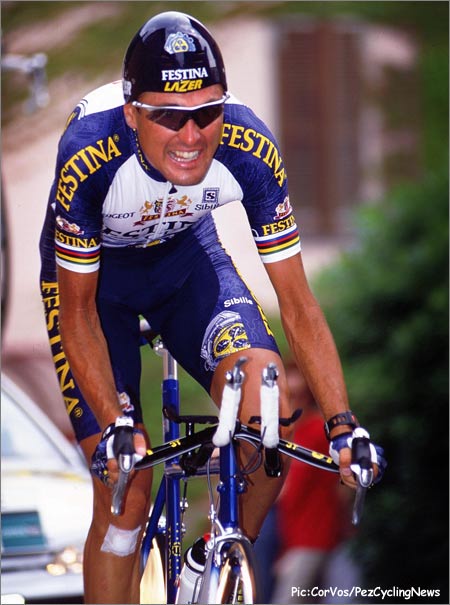 Zulle looked invincible from the gun in the ’98 Giro.

But Sergei Gonchar (Cantina Tollo) is dieing, his already physical style with rolling shoulders and nodding head is disintegrating and the bike is swerving on the smooth tar as the Ukrainian finally starts to feel the resistance of the 56 x 11 he is battering – a last desperate lunge takes him through the timing beam.

It’s not enough, just two riders before him a tall and much more stylish character on a Peugeot low-pro had recorded the best time, taking a massive 10 seconds off the previous best, set by Arturas Kasputis (Casino).

Alex Zulle (Festina), 1996 world time trial champion is the Clark Kent of cycling; a tall geeky, figure with ‘bottle top’ glasses to combat terrible eye-sight off the bike, put him on a chrono bike and he’s a snarling monster.

Zulle drove all the way to the line and in those final metres he took the race by one slight second, to go with his Tour and Vuelta prologue wins.

The guys in Zulle’s following car were so fired-up that they forgot they were supposed to swing off from behind their rider before the line and locked the Peugeot estate up in a cloud of blue rubber smoke, yanking it left and off the course as furious policemen and UCI officials gesticulated wildly – brilliant stuff.

It was the tall man from Niederzwil’s 50th pro win and his 28th against the watch. 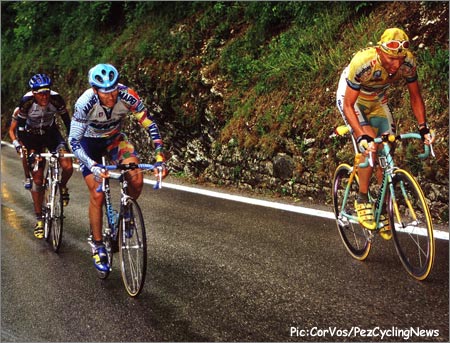 Zulle & Pantani put on a good show… for at least part of the race.

My only regret was that I wasn’t following the whole race; it was to be a race of thought-provoking performances however.

Stage six saw a rampant Zulle get back into the pink in the best possible fashion with a solo win in the hills; it looked like he was the man.

Cipo grabbed three in a row (how I miss that man) before a surprising Laurent Roux (TVM) grabbed a rare French Giro stage/pink jersey double – albeit for just one day.

Stage 13 and the late Marco Pantani (Mercatone Uno) sent Italy into raptures as he took a solo mountain win but Zulle went back into pink with Pantani 22 seconds behind.

By the end of the next stage that gap was 3-48 as Zulle gave another display of time trialling brilliance, riding 40 kilometres in 44-36, catching the little Italian in the process, all the signs pointed to Zulle justifying his huge salary from Festina.

Zulle held the jersey through stage 14, but on stage 15 Pantani took-off with Guiseppe Guerini (Polti) leaving the Swiss race-leader for dead on the steep slopes of the Marmolada.

From the personal collection of Ed Hood – you gotta love anyone who keeps old copies of newspapers in their archives.

At the time it was difficult to fathom this disastrous collapse, but three years later, when Willy Voet’s scathing book ‘Breaking the Chain’ was published, all became clear.

Voet explains getting a rider’s balance of drugs just right was akin to tuning a Formula One racing car, but a Spanish soigneur; “injected massive doses of corticosteroids, which destroyed the balance which had been so finely calculated. Where the hormones had been building up the muscle, the ‘cortico’ just devoured them. The result was disastrous: after being by far the strongest in the first ten days, Alex simply fell to bits.”

When I read that, it explained a lot.

The only risk to Pantani was the final 34 kilometre time trial stage 21; it was just conceivable that Russian Giro stalwart, Pavel Tonkov (Mapei) could pull-back the 1-28 he needed to beat the Italian climber.

Italy needn’t have worried as the tiny Pantani got within 30 seconds of bear-like stage-winner Gonchar to finish third and seal the GC win.

I wasn’t the only one amazed at the little man’s sudden chrono prowess that day – subsequent revelations and events would perhaps help explain the miraculous performance, however.

Let’s hope for plenty of that ’98 prologue-drama this year, but none of that other stuff – please!