Giro Up Close: The Colle dell’Agnello

It’s no secret that Thursday’s Giro stage 12 is can-o-whoop-ass waiting to be opened … The real battle will likely happen on the hardest slopes of the fabled Izoard, but the long tough grind up the day’s first climb to the race’s highest point (2744m) – the Colle dell’Agnello – will set the stage. Here’s what to expect from the road…

It’s commonly the Giant of the Granda after the north west Italian region where the Colle dell’Agnello is located. Granda in Italian means “Big”. And the district of Cuneo is in fact the biggest one in Italy. It’s a remote land, connected to the world by a solitary road and no more. The Alps close the way to the France, the Appennines to the sea and the city of Turin to the north east has historically been considered a gate to the world by people in these parts.

But the “Granda” is also the land of the famous Italian wine Barolo. A wine which is considered, as the Brunello, one of the most delicious of the world. The Nebbiolo, which is the wine coming from the grapes of this land needs years before becoming a Barolo. 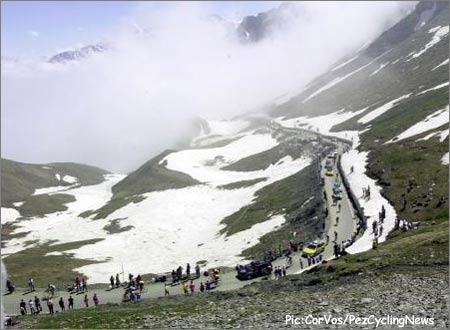 At 2744m, this year’s Cima Coppi is sure to have snow, and sure to put the hurt into the race.

This is also the land of the hypocrites. So big that once have been found they are delivered to the most important restaurant of the Cities. New York, London, Tokyo boast to propose in their list the Alba’s hypocrite, and Alba is exactly is small town in the Granda.

This is the land of the Castelmagno. A special mountain cheese. Served with honey and pears it’s something to try before leaving this life. The valley of the Castelmagno is a few miles from the Valle Varaita, that will be crossed by the Giro d’Italia during its 12th stage, from Scalenghe – Briancon. 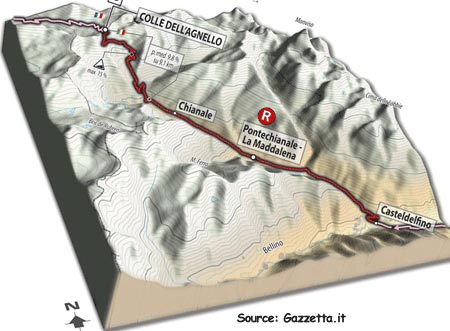 Living far from that area I planned a long summer trip there last year. The Colle dell’Agnello is one of the climbs that must be visited once in the life. It has been discovered only recently by pro cycling. Its first time in the Giro was the 1994 when Pantani tried to upset the general standing on the way to Le Deux Alpes. That day an old but super Moreno Argentin was able to help his team mate, the Maglia Rosa Evgeny Berzin, to save the leader’s jersey and his face. The appointment with the glory, for Marco, was just delayed of some years, always on the way to Le Deux Alpes and always with a far away attack on a Giant. The Galibier.

The next year, the 1995, the Colle dell’Agnello, was proposed again by the Giro route in the final stages. Rominger was in Maglia Rosa and Berzin has quite far in the General. The Colle dell’Agnello (the stage was to Briancon) was preceded by the terrible Colle di Sampeyre. It was a very cold May, on the Sampeyre there was the snow and nobody was able to attack. On the Colle dell’Agnello some cars of the officials preceding the race were involved in an accident. An avalanche covered them just a few hours before the passage of the riders. That time the Giro stopped in Chianale at the beginning of the last difficult part of the climb.

The Colle dell’Agnello came back in the 2000. Again the Giro was going to Briancon, again one of the last stages. Casagrande was the Maglia Rosa, Garzelli and Simoni his contenders. Simoni attacked after Chianale at the beginning of the most difficult part of the climb and Garzelli settled the pace for many kilometres. Casagrande was able to maintain the leadership after a very difficult day but he lost it the day after in a ITT from Briancon to Sestriere. 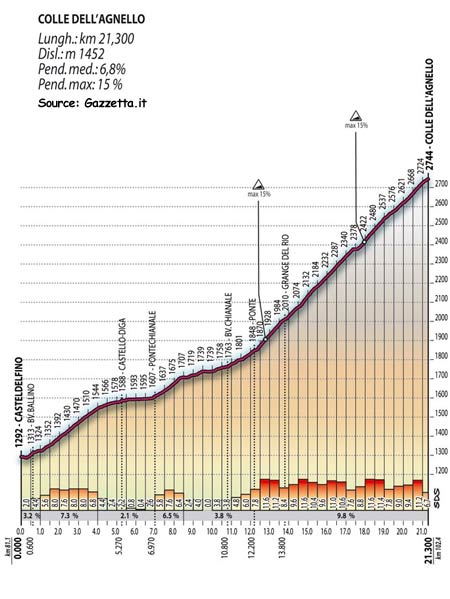 That stage is remembered also as one of the last great races of Pantani. He was out of the game but on this mountain he was able to survive and, on the Izoard, he helped his team mate Garzelli.

Just three times in the story; and one almost missed. But the Tifosi realized immediately that this climb deserves a place in their dreams.

The Varaita Valley is very long. Almost 60 kilometres. Sassuolo, in the flat, is 350 meters high and the Colle dell’Agnello is almost 2750. Just beyond the top is the border between Italy and France.

It was the last days of August and we started from Casteldelfino; 20 kilometres to the top, 1292 meter high and the fearsome climb ahead. The climb starts immediately after the village but it’s not hard. Very regular for more then 5 km, a good warm up for the legs and the body.

Just a few hundred meters of difficult slope to reach the dike of a big mountain basin and we’re in Castello, a very nice village on this dock. The next 7 km to the foot of the last step are very irregular. The view opens to the last fields of the valley and to the last climb too. In Chianale is already possible see the top of the Colle dell’Agnello and this is not really any help.

Me and Claudio start to think about a helicopter to complete our adventure. The last 10 km are in fact one of the most serious roads that a rider can experience. The slope is very regular but this doesn’t help at all because we are always over 10%.

I have just few images of that climb in my mind because my body was so busy that I wasn’t able to record anything in my mind. Three turns in the first 2 km then a terrible line that climbs climbs and climbs on the right of the valley that is always more and more narrow.

Other 5 or 6 turns before reach two small lakes. The air becomes thin and cold. You can see the last two turns but the speed is so slow that you know it will take so long time…
The last turn is almost on the top and just in that moment the slope slows down to 6 -7%.

On the top you feel, as always the king of the mountain, especially during a nice day as I experienced there.

On the top of the Colle dell’Agnello the protagonists of the next Giro will be called to their first important test. Nobody can hide himself there. No lucky, no teams can help you on such kind of road. The selection will start early but the major one will be done after Chianale. Maybe too far from the Briancon but, believe me, decisive.

On the top, the important trophy of the Cima Coppi.

Coppi never went there in his career. But, without question, this is a fitting mountain for his prize and one he would have loved and respected.