Stage 10 will offer the chance for the strong at heart to reach out at make a stab at glory, as this is one of those stages where the old saying “you might not win it, but you could lose it” comes into play. The 90th Giro rolls west along the Italian Riviera and then grinds upward for the cruel 250km, three-climb run from Camaiore to the nosebleed finish at Santuario Nostra Signora della Guardia.

Today would be a today for the big guns to fire if they had any hope of climbing up the GC, as the up/down/up/down nature of today’s course, coupled with the vicious finish, was sure to bring out the best of the best. Pinotti would be severely tested today to keep the coveted pink leader’s jersey. Read on…

Given the rather brutal nature of the day, the peloton was left without the comedic stylings of sprinters Greg Henderson (T-Mobile) and J.J. Haedo (CSC), as well as Yohann Gene (Boygeus Telecom), and a host of lesser names. Those boys, by day’s end, would be the smart ones, drinks in hand.

The early parts of the race were calm after the rollout under hot weather conditions, and then near 55km, we had our first solid escape group, featuring Hubert Dupont (AG2r), Alberto Losada (Caisse d’Epargne), Ivan Parra (Cofidis), George Hincapie (Discovery), Mauricio Ardila (Rabobank), Fortunato Baliani (Panaria). Hincapie, who has maintained he’s here for the training (and doing so today with a shaved head), certainly put a lot of hard work into the early break, and was prominent therein as they racked up over 5 minutes in lead which put George in the virtual Maglia Rosa for the time being. 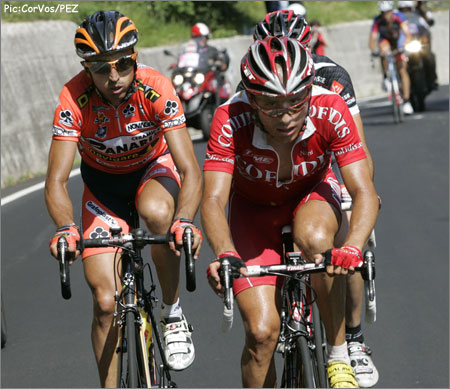 Ivan Parra put in a day reminiscent of his two-stage win Giro from two years ago. He didn’t win, but he rode incredibly all day.

The six continued the move well towards the mountains, while behind Lampre, then Liquigas, took up the mantle of the chase and began to grind down the lead groups advantage. As the climb of the Campi began, the front six had barely over a minute in hand, and Hincapie’s stint as the virtual Maglia Rosa was kaput. For sure the fireworks would start soon, as behind the bigger sharks swam near the front. Conversely, the likes of Petacchi and his ilk began to distance themselves from the rear end of the group in pure sprinter’s style.

The front six became 3, and then Hincapie clawed his way back up the Campi to make 4, as Dupont and Ardila could not hold the pace any longer. The Nostra Signori loomed, and with a mere 15km to go, the quartet of Parra, Hincapie, Baliani, and Losada motored as best they could, as the peloton began snapping at their heels. At the base of the climb, they had a mere minute in their pockets. Stomachs would have sinking feelings now. 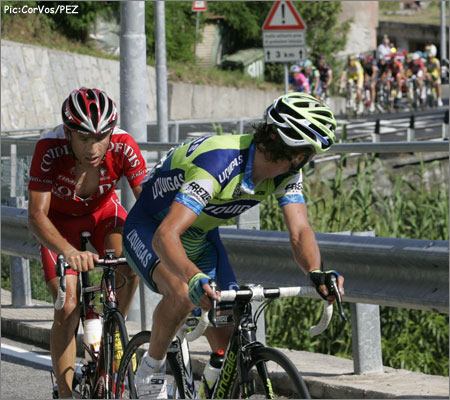 The climb of the Nostra Signori flexed her might, and the tiny Parra jumped the group, to be chased by the estimable George Hincapie. Meanwhile, in the main group, Liquigas revved it up and names like Zabriskie, Bettini, Rebellin, and others were all rocketing aft.

Parra distanced himself again from Hincapie as the neon green and dark blue lead group came upon them with all the big names in tow. Everyone you would expect to be near the front was, and the race was truly on. Hincapie was absorbed, and the first real player, Danilo Di Luca launched the first mortar into the race, attacking hard and joining Parra. Behind, attendants left their captains or pulled if they could, and a small group caught up to Di Luca and Parra. As if invited, Leonardo Piepoli jumped away and put in his bid for victory with an all-or-nothing move. Pinotti suffered at a minute back from the fireworks, slowly releasing his grip on the overall lead. 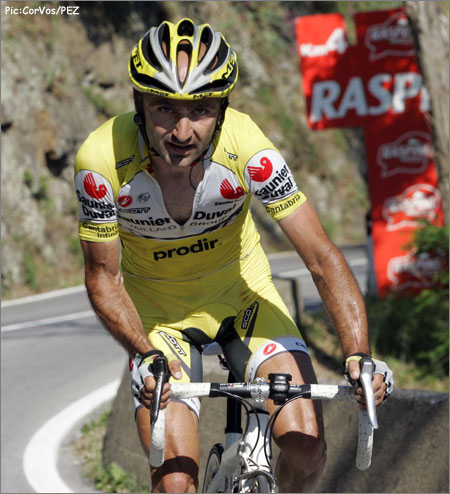 Leonardo Piepoli is a bad, bad man in the mountains.

Upstart Andy Schleck of CSC dragged his way towards Piepoli, who clearly did not want a playmate. Behind Schleck, Di Luca found new legs and moved forward again, Ricco looked around for Gibo, who was busy detaching himself from a group further back to move up the road to join his teammate. Lampre was in the picture with Cunego in tow just behind. Now this was pure Giro fireworks! 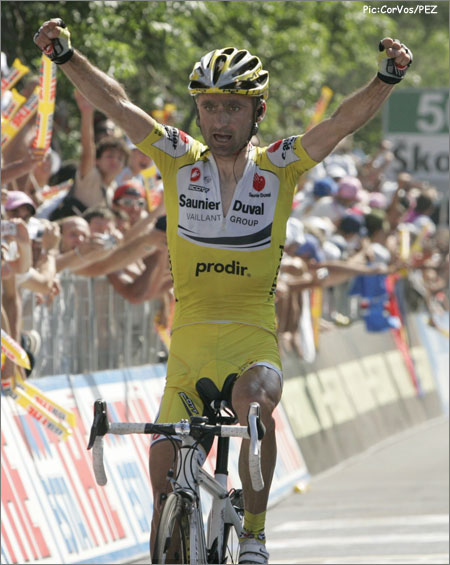 Leonardo stayed by himself and the order was set, separated by seconds as Piepoli won the stage alone and in fine fashion, to be followed by Di Luca, then Schleck, then Simoni, all separated by a few seconds up the brutal summit finish, drawn faces all around from the effort. 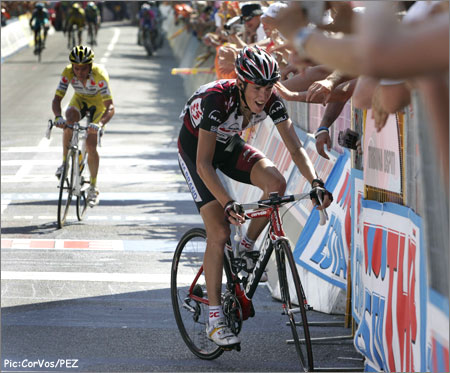 Andy Schleck came to a dead stop immediately after the line – he went hard.

With Pinotti rolling in 4:30 back, that meant yet another Liquigas rider, this time Andrea Noe, would be in the leader’s jersey tonight. Perhaps keeping it warm for the resurgent Di Luca? Stay tuned, the Giro is really just warming up. 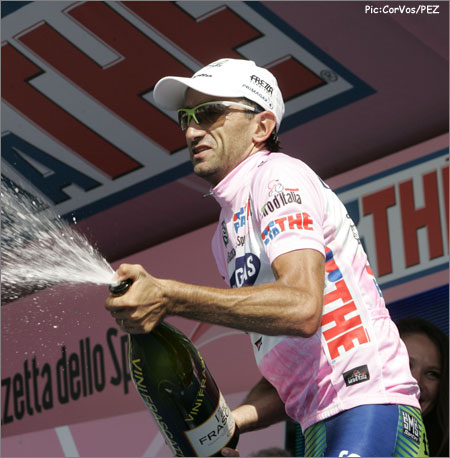 38-year-old Andrea Noe rode into the Maglia Rosa today and now holds a commanding overall lead. Noe, unlike Pinotti, has the class, without a doubt, to hold on for a very, very long while – even perhaps to Milano. The Stage 8 break might indeed prove critical – take note of the GC and look how far behind the rest of the Favorites now are. This could end up being a very, very interesting final 11 stages.

It’s not just Noe though – there are more – Bruseghin is more than capable uphill – he was 14th today, the same goes with Sella. Patxi Vila is exceedingly strong in the mountains as well – they’ve all been spotted some real time over the pre-race favorites, and suddenly you have to wonder if at least ONE of them can go the distance – and I think we might be in for a real surprise.

Um, I wouldn’t discount Noe just yet. Noe has finished top 10 at the Giro a few times in the past – 4th in 2003, and now he has a nearly 3 minute head-start on Di Luca, and much more on the other pre-race contenders.

Look at the other break contenders:

Bruseghin is a noted TTer, he goes uphill fast, etc etc. Petrov is Tinkoff’s GC man for the Giro…Sella is already reknowned in the mountains. He loses time, but he’s always there. Vila also ain’t bad either – he beat Landis in the hardest Paris-Nice stage last year. He was also 10th overall at last year’s Giro – as Cunego’s domestique.

This could get exceedingly cool really quickly.