After yesterday’s horrendously difficult 250k hot slog, the riders were all hell-bent on long day of piano practice, and that they had. Then the rain fell in the finale and all thoughts of piano were forgotten, and many a rider tried the slip and slide across the seemingly teflon-coated finish line, whilst Ale-Jet stormed to Win #3.

In a thrilling finale made all the more entertaining by an apparently ice-coated finishing stripe, Alessandro Petacchi took his third win of the 2007 Giro in commanding style (and by commanding I mean he won the bike throw contest over A&S’s Gabriele Balducci) and led home a small group of riders at the very front safely across the line…and then they started falling behind. 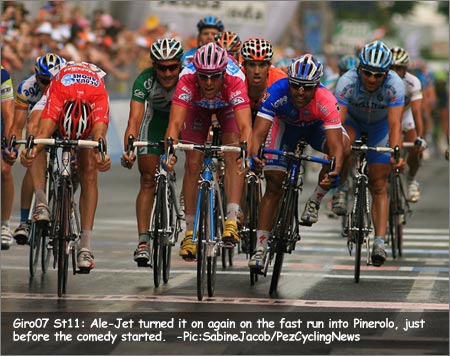 Unfortunately for Paolo Bettini, he was caught up right as the festivities began. Replays appear to show that Bettini was cut off pretty nicely by Petacchi (no fault of Ale’s), and then sat up allowing an unfortunate Tinkoff rider by, who thanked Il Grillo by falling down right in front of him. It was no fault of the poor Tinkoff rider – someone was about to do it, he just lit the flame at the opening ceremony.

No wheels crossed, no elbows thrown, no heads were butted, it was only the butter coated finish line and high speed that started the fall down party. The Tinkoff rider got it started, followed rapidly by Bettini, and then after that, it was pretty much every rider behind…plop, splat, boom, bang…and they all slid across the line on their collective butts. How many went down? Um, a lot.

It actually was mildly funny to watch, as rain-slicked crashes really aren’t too terrible – the same reason that you fall down so easily allows you to slide just as well, so no one was in any real grave danger, allowing the spectacle to almost be worthy of a chuckle.

By far the best image of all (and I agree with Chris over at PodiumCafe.com) was the Maglia Rosa sitting bolt upright and sliding across the line on the ground. The leader falls and slides across the line sitting down. That’s just funny, I don’t care who you are.

Oh, So There Was A Race BEFORE The Finale?
You wouldn’t believe it, but there was a race going on for the 190ish kilometers before the finish festivities.

The first hour was run at a breathtaking crawl of 30kph. A sprint followed the first hour and caused a minor stir and two riders to get off the front momentarily, but they came back, allowing for two more riders to go at 38k into the race: Carl Naibo (AG2R) and Mickael Buffaz (Cofidis). Apparently Naibo came to the rapid and intelligent conclusion that this was a fool’s errand (or a Tinkoff move) and waved by to Buffaz and headed back to the happy confines of the field, whilst Buffaz chased glory and pretty pictures of himself for the next 135 kilometers.

After two hours of racing, the average speed hit 32kph.

Wait, after nearly six hours of ‘racing’ the average speed jumped all the way to 34.2kph!

I really do love the Giro. That’s just good stuff right there.

Anyhow, so poor ol Buffaz got himself off the front all by his lonesome, because apparently the entire Tinkoff team must have taken a team pee break. More likely, Pavel Brutt and Mikhail Ignatiev were wrestling over who would get the early break honors…and then they missed it. That’s gotta be it.

Back in the field, urgency and pain were about as far from the collective conscious as humanly conceivable as Matt White distributed ice cream to a few lucky riders including Paolo Bettini.

It didn’t take much to reel in the little fishy that could, Buffaz. He was snatched up with 11k to go and about that time the race began in earnest.

11k To Go, Let’s Do Some Racin
From 11k to 3.5k to go it was a race for the difficult u-turn at, you guessed it, 3.5k to go. All the teams with any thoughts on stage glory started moving their collective trains about as best they could with one team swarming another and then being swarmed in return. Tinkoff started congregating at the front and you just knew it was about to happen…

BAM! There went Mikhail Ignatiev through the U-turn – he attacked with the fury of a thousand suns, but the fury wasn’t quite enough, he probably needed some extra fury and Valentino Rossi’s motorbike. The Milram train easily squashed his insect attack.

Yes, race fans, the waning moments of the race were full on wet…but I’ve seen wetter…in a swimming pool. Heading into the final stretch the Milram choo-choo was in full effect: four and then Petacchi with McEwen sucking down Ale-Jet’s exhaust. Napolitano wanted some Peta exhaust though, and commenced to scuffling over the wheel with McEwen.

With a little over a kilometer to go, Credit Agricole started a come-over-the-top-of-the-Milram-chugga-chug attempt, first with Bodrogi, and then Julian Dean opening the sprint from way out. Milram timed it better as Brett Lancaster fired from about 300 and tried to set Petacchi up about as perfectly as could ever be scripted (but it didn’t quite work out that way), and Petacchi did his darndest to rid the world of any doubt that he’s washed up…for the third time, so he won again. It wasn’t a dominating four bike length stomping, but hey, you don’t get bonus points or an extra shiny Ciclamino Jersey for nuclear bomb-esque sprints.

Then they started falling down.

Next On The Menu…
There won’t be too much piano playing tomorrow. After a rest day today complete with a trip to the water park, it’s back to the painful business of bike racing in Stage 12 as the race heads to France for what should be a smokin finish in Briancon.

Stage 12 will see the Cima Coppi of the 2007 Giro at the Colle Dell’Agnello, which weighs in at a whopping 2744 meters (I hear the air is sparse ’round those parts). The summit of the Dell’Agnello comes at 102km in and is followed very quickly by the famous Col d’Izoard – after that it’s a steep, technical finish into Briancon.

Gilberto Simoni has mentioned that he has an outstanding bill to pay with the Izoard, so he probably has something in the pot cooking. Paolo Savoldelli is probably looking forward to this year’s first downhill race, and the pre-race favorites have to be thinking about how they’re going to start working into the rather large time gaps that separate themselves from the able-bodied climber opportunists from a few days ago, chief among them Andrea Noe, the Maglia Rosa.