Hold the Mayo! No wait, EXTRA Mayo! Iban Mayo jumped from relative obscurity back into the headlines today with a strong win at the resort town of Comano Terme, giving Saunier Duval yet another stage win in this 90th Giro.

It was a wet, messy, dirty affair to start the day, as riders approached the line under miserable and angry skies.

A few attacks were launched and brought back, all before the first serious climb of the day, the Pian delle Fugazze, with its average gradient of over 7%. This might be where someone could go away, one might think. And folks did indeed jump, but the names were surprising. 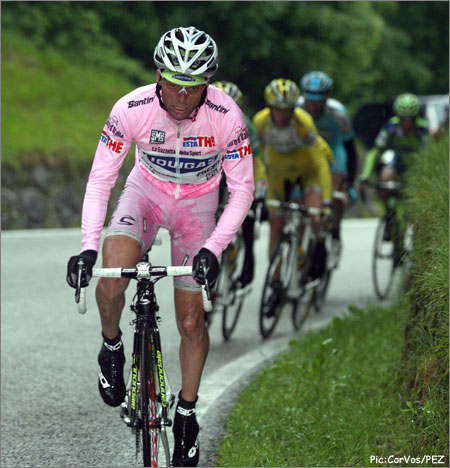 Piepoli went first, only to be brought back. Then, most odd, Di Luca took a stab at an attack, all with 80km left to go. He had told reporters yesterday he felt his chances of winning the Giro were now “80%”, so you have to wonder why he’d be taking this kind of measure. Those certainly wondering would be Ale-Jet, some three minutes back over the summit due to the zany antics up front. 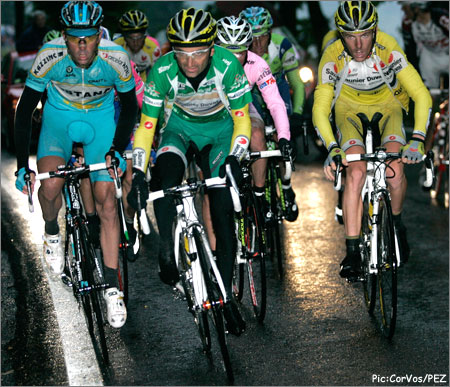 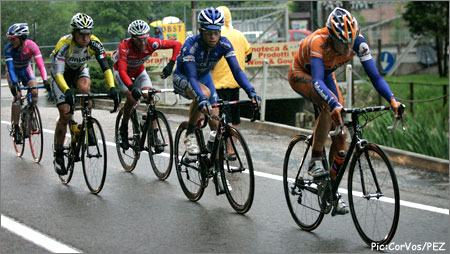 The awful weather must have made for some happy riding.

Losado and Mayo skipped away and made a dash for two-man freedom, and quickly built up half a minute on the chase of 5, and over three-and-a-half minutes of the gruppo maglia rosa as they approached the Passo Ballino. Perhaps aiding the escapees was the atrocious weather. Buckets of rain lashed the riders, be they in front or behind. 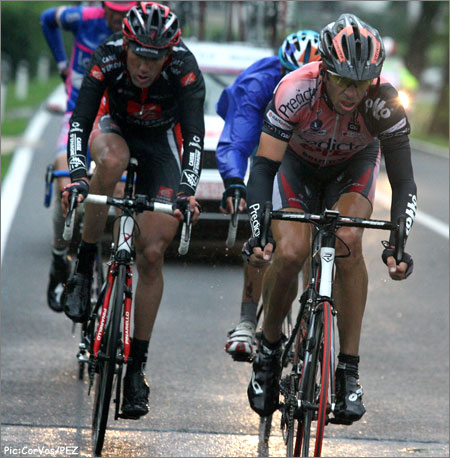 Cioni missed the fun up front and was privileged to chase for quite some time in the hopes of bridging.

The Ballino had a tough pitch near the top, almost 10%, while behind Garzelli gave up the ghost and exited the chase group. He gets a pass after his vicious efforts of recent days. Meanwhile, the Di Luca group put baby to bed and quickly gave up over 10 minutes.

Mayo chose to negate any sprint opportunity for his fellow Spaniard Losado, and jumped with 4k to the summit. Losado was clearly affected by the jump, and labored to close the gap. It wasn’t to stay all rainbows and ponies for Mayo though, as the Di Luca group made a furious ascent and closed within three minutes! Rasmussen chased alone ahead of the group, then Visconti and Petrov also dug deep to “hold the Mayo”, but Visconti ate it in a corner, and Petrov was left alone to chase. 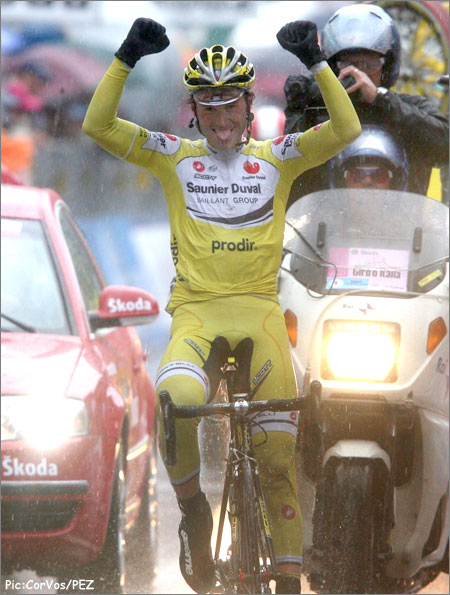 That’s four wins for four different riders on Saunier Duval for this Giro.

The rain dumped on and on, but Mayo held his steady and fluid form (no pun intended) to take his first win since last year, and Saunier Duval’s FOURTH of this Giro. Bravo Iban!

There will be no change at the top, and Di Luca might now think himself as having an 83% chance of winning the Giro.

Dario’s Diario – Goin’ For It On The Zoncolan