Sticking the words of myriad critics down their throats, Danilo Di Luca confirmed his first Grand Tour success in Milan. The Liquigas chief won the race he always wanted to, and he did it in super style. Maybe the fact he ain’t bothered about the TdF will help raise the profile of the Giro and all the other great races around Europe.

It wasn’t exactly a roller coaster of fun and excitement on the final run in to Milan. For most of the stage, it seemed like a day off with the average speed barely touching 20 miles an hour. But if you’ve raced your ass off for three weeks in sun, heat, snow, rain, up the Zoncolan, and everything in between … well, you probably deserve a rest. 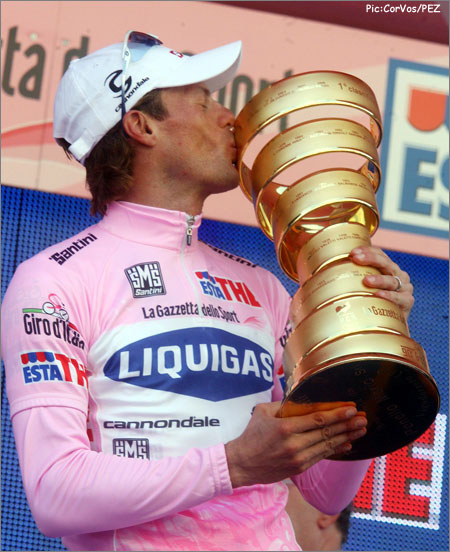 Misha Ignatiev hasn’t been taking things easy, and … you guessed it … he was off the front again today. With 5 finishing circuits left he jumped away with Markel Irizar of Euskaltel in pursuit.

Irizar was picked up, then Discovery Channel’s Steve Cummings tried to get on terms, but fell short. Ignatiev held out for 16 kilometres before finally succumbing to a peloton being driven by Liquigas. 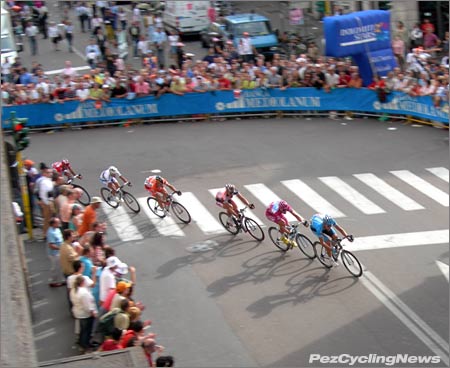 Ale-Jet gets ready to turn it on as the last corner is history.

Once Di Luca’s boys had done their job, the Milram crew took control when the race hit the closing kilometers. Alberto Ongarato, Mirco Lorenzetto and Brett Lancaster did their usual, excellent lead-out work into the final metres.

Zanini tried to go early for Predictor-Lotto, and Max Richeze gave it his all, but once AleJet Petacchi turned on the afterburners down the left side of the road, it was all over. 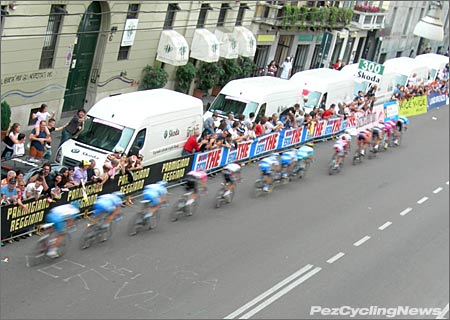 It means Petacchi now has 24 career stage wins in the Giro d’Italia, putting him on a par with the legendary Giuseppe Saronni. And he did it in his splendid ciclamino kit as winner of the points competition. Confusingly, Petacchi was also winner of the most combative prize – maybe that should have gone Tinkoff’s way? They worked bloody hard, but won only the Fuga Gilera trophy with Ignatiev. 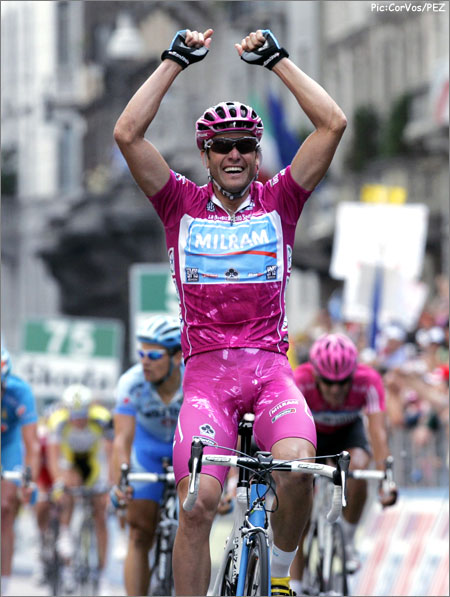 Andy Schleck finished safely in the bunch to complete a blazing first grand tour – 2nd overall, and the reinstated maglia blanca as best young rider. With Ricco in 6th, we’ve seen the real emergence of a new generation over the last three weeks.

Leo Piepoli rounded off a fine three weeks for Saunier Duval with the maglia verde as best climber to go with the team’s four stage wins. 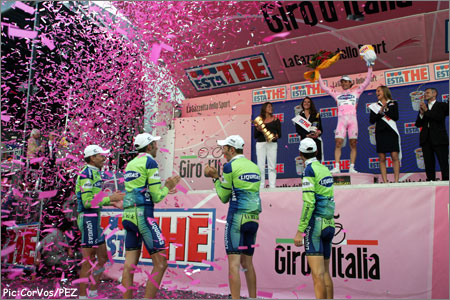 And a shout out too for young Oscar Gatto, ‘winner’ of the non-existent maglia nera for finishing last on GC.

If you’re Italian though, the only name that really counts is that of Danilo Di Luca. After the wobble on day one, where he had a war of words with upstart team-mate Gasparotto about who looked best in pink, he’s been in total charge of the Liquigas team, and bossed the GC. 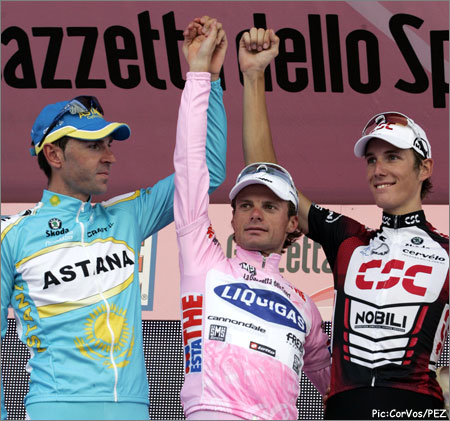 For a guy dismissed as ‘only’ a Classics rider, it’s a super triumph. Strong in the TTs, calm under pressure, aggressive in the mountains … and all the while keeping that finishing kick firing. It brought him two uphill stage wins, which means he can truly rate himself as a worthy champion.

Thanks for keeping it Pez all the way to Milan … stick with us, because there’s plenty more races on the calendar that’ll need to go some to match this barn-burner of a Giro!