Another day dawns and again our Giro warriors cross swords on an undulating 177km jaunt that has one of the longer climbs of the Giro, the Monte Terminillo, at 21km long and 1894 meters. Two other pretty little ditties manifested themselves in the Forcas Capistrello and di Cerro. On paper, it doesn’t look that difficult to really upset the overall, but with an apathetic Maglia Rosa in Di Luca, and a few opportunistic moves, we could see a change at the top today. Read on…

After the rollout in Tivoli (minus the services of two DNS: Thomas Ziegler (T-Mobile) and Patrice Halgand (Crйdit Agricole)) the first 50 k was all the typical stick and move type stuff, with Tinkoff doing most of the animating. Twos and threes attempted to jump off, nothing really had the right combination to appease the gruppo. Until… 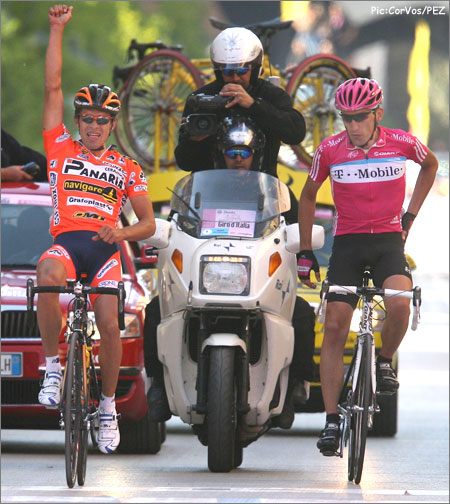 Finally a break stuck of Marco Pinotti (T-Mobile), Luis Felipe Laverde (Ceramica Panaria-Navigare), Christophe Kern (Crйdit Agricole), Hubert Schwab (Quickstep-Innergetic) and, the whole mess was started by Daniele Contrini of Tinkoff. This lineup seemed to make sense to the group as they let the quarry “run with the hook”, to use a fishing term, and extend a comfortable lead as the peloton set into a disinterested pace behind.

Di Luca has made few qualms about letting the jersey go if the right group got away, and this group of 5 got over the Terminillo with 7 minutes in hand.

With just over 50k to go, the break hit the Forca Capistrello. The 5 up front soldiered through the incline, while behind Liquigas rode tempo to keep the break from getting embarrassingly far ahead. With 40km to go, the gap was reduced to six and a half minutes, roughly. It was clear the break would stick today, but who would win?

The final climb was Forca di Cerro with just under 20km to go. This little bugger is 10.1-kilometre long, and has an average gradient of 4.9% and a maximum gradient of a knee-breaking 1 7 points. Ouch.

With the virtual Maglia Rosa hanging on the T-Mobile man’s shoulders as the final climb began, it was the Colombian Laverde that fired the first shot and detached himself from his breakaway brothers. Only Pinotti has the wear with all to grab his wheel, albeit with a bit of teeth grinding. The two quickly put about 30 seconds into Kern and Schwab, and Contrini faltered a further 20 seconds back. There would be no repeat of his Tour de Georgia “breaking from the breakaway” move. With the two up front as they were, it would seem logical that Pinotti would allow Laverde the glory of the day, while taking the bigger prize, the Maglia Rosa. And so it was. With the other 3 faltering ever farther back, Pinotti let the Colombian ride off at about 300m, and it was his moment in the sun.

What About This Pinotti Guy?
Well, since Marco Pinotti just went and got himself a nice 4:12 buffer over the next rider of any real importance (Danilo Di Luca), there’s a fairly fair chance that we’ll be seeing a lot of our lone-Italian on T-Mobile for quite some time.

Unfortunately for Pinotti, his T-Mobile team has been completely turned inside out due to bad luck – and now has only 6 riders, including Pinotti. That should hopefully not be too big of a deal. It should help that the next day of any real GC consequence isn’t until Tuesday.

As for Pinotti – he can time trial very well (former Italian TT Champ), and goes uphill quickly as was evidenced today, along with a stage at Pais Vasco a few years back (well, it was a solo escapade that netted the win, but still) – to go along with the KOM jersey that year as well (2003). For the past several years he rode for Saunier Duval and then made the surprising move to T-Mobile for ’07. He’s a fairly non-descript rider who suddenly has the chance of a lifetime. Let’s hope he can pull a Voeckler or something, because that never, ever gets old when an underdog gets a lead and then rides completely out of his mind. Love that. 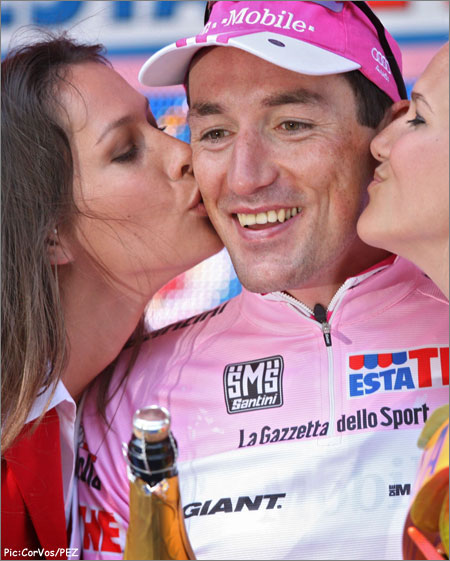