Marzio Bruseghin of Lampre might not have the style of “The Little Prince” but today he showed that he can ride fast, very fast! He beat a list of the worlds best against the watch, Kloden, Contador, Pinotti and Leipheimer, Alberto Contador lost out by only 8 seconds, but he has put himself in the No. 1 position as favorite to win this Giro d’Italia, but who knows?

This could be a decisive stage of this years Giro d’Italia, but we still have two hard weeks to go before the last stage in Milano, which is also an individual time trial. The course today runs mostly up hill from the coastal town of Pesaro to Urbino, climbing to 450 meters altitude, not very high, but there are two steep sections of 10% and 12%, check out “The TT Corsa Up Close” by our man on the road; Alessandro Frederico. 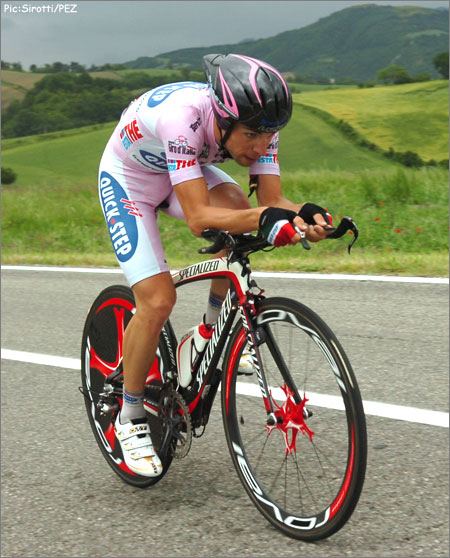 Giovanni Visconti did more than enough to keep his Rosa – he caught 2nd place Matthias Russ.

News from 2007 Tour de France champ, Alberto Contador, is that he went to the radiologist yesterday and he has a fissure in the radius of his left elbow from his crash on stage 8. He said “I do not intend to leave the race” but he is worried about his time trial position for today. “That is a problem” continued Alberto, “I hope I still make a good time trial. The doctors tell me that it is a small fracture. With a bit of luck, I can recover a bit during the “easier” stages of Wednesday to Friday.” His team mate, Kazakh rider Assan Bazayev spent his rest day afternoon at the dentist!

The weather isn’t so nice for today’s stage, it has been raining this morning and the temperature is only 13єC, with a variable wind. As the first riders were warming up it stopped raining, but there are rain clouds on the horizon, luckily there are not many sharp bends on the course until they get to the last kilometers in Urbino. 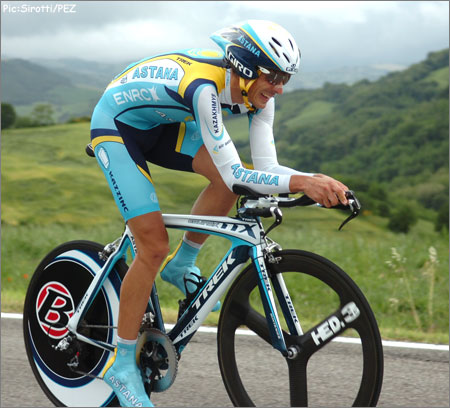 The Early Starters
Early leader on the score board was German rider, Tony Martin of High Road; with a time of 58.54 a good minute ahead of second placed Yuriy Krivtsov (Ag2r). PEZ’s Giro rider and Australian TT champ, Adam Hansen, also of High Road came in with a time of 1 hour 1 minute and 13 seconds. The two British High Road riders; Bradley Wiggins and Mark Cavendish were both taking it easy and had times nearer 1 hour and 5 minutes. The two Brits at Barloworld; Steve Cummings and Geraint Thomas are both around three minutes slower than Martin, but the big guns are still to fire at this point.

The finish is very interesting as it’s up hill and on cobbles, not Belgian cobbles, more smoother and with the damp conditions they are quite slippery, this doesn’t slow down CSC’s Jason McCartney as he pushes in to second place with a time of 59.13. The course didn’t suit British time trial champion; David Millar (Slipstream) as he was 5 minutes off the pace. Out on the course we had the strange sight of Paolo Bettini not wearing the World Champions jersey, but he was doing a fair ride for a non-time trialist, he did get passed by Italian TT Champion Penotti (High Road), another ex-World Champion, Gianni Bugno was flying one of the TV helicopters, he was for sure the fastest on the course today!

The Fast Riders Start to Finish
Out on the course there were quite a few showers, one seemed to be following Dennis Menchov (Rabobank), but the conditions for the Astana pair of Levi Leipheimer and Andreas Kloden was a dry further back, Leipheimer looked fast with his chin nearly touching his hands in a very low position, this doesn’t help him nearly crashing into a rough motorbike at a road junction. Alberto Contador has a bad start as his gear slips on his exit from the start house as his team mate; Kloden passes the first time check 5 seconds slower than Pinotti, its flat to this point so it’s not a good guide to the form. 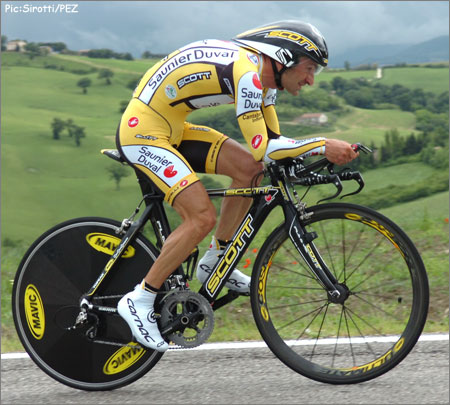 It’s just harsh to make Piepoli do a time trial, just take off 10 minutes and it’ll work out just fine.

“Super Rocco” heads off into quite heavy rain, not sure how a Cobra will perform in these conditions? Not so good it appears as he is 39 seconds down at the first check. As the top riders start their ride, Vladimir Gusev (Astana) comes in with a new fastest time of 58.48 catching Toni Colom also of Astana just before the finish. 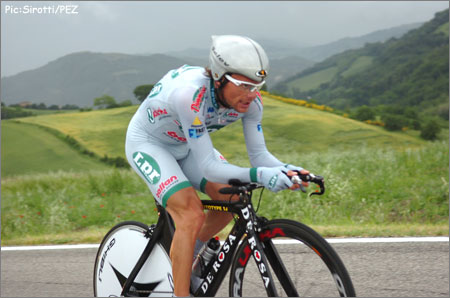 Di Luca acquitted himself well, but he’s already 1:34 behind Contador on GC.

New Leaders
Marco Pinotti (High Road) posts a new fastest time of 57.17, a minute and a half faster than Gusev, the Italians at the finish go wild as they think this time will be difficult to beat. Belgian Jurgen Van Den Broek (Silence-Lotto) comes close as he catches two other riders and shows them how a Belgian rides cobbles to the finish line, but he wasn’t to hold second place for long as double Vuelta winner; Dennis Menchov (Rabobank) gets within 10 seconds of leader Pinotti. Surprise of the day has to be the ride of Gilberto Simoni (Diquigiovanni) who is only 1 second slower than Levi Leipheimer in 57.43. 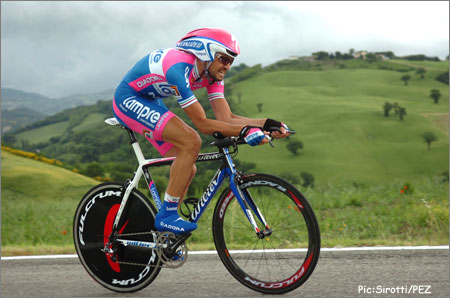 Marzio Bruseghin is a wonderboy in Giro time trials. He was impressive today en route to taking the win over the Tour champ.

The Contenders
Marzio Bruseghin (Lampre) becomes the new fastest rider (56.41) and all eyes are looking for the next change of leader and as Adreas Kloden passes through the stone arch that leads onto the cobbled finishing climb it looks as though it will not be the fast German at the top of the board as he is 20 seconds adrift of Bruseghin. Paolo Savoldelli (LPR) had to have a bike change within sight of the finish, he hit the cobbles and was pedaling in fresh air as it looked like his chain had rattled off on the rough surface, meanwhile out on the course Alberto Contador’s injuries cant be causing him much of a problem as he is leading at the last time check looking comfortable, as opposed to Danilo Di Luca who is fighting his bike over the short, steep climbs. Contador catches Pellizotti 200 meters from the line and finishes an agonizing 8 seconds slower than Bruseghin. 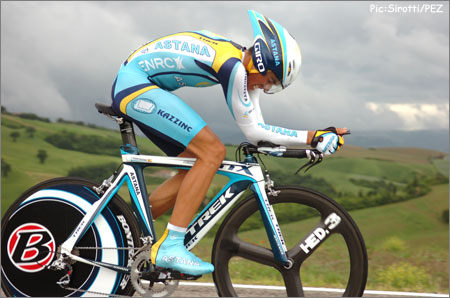 Alberto Contador, though still many minutes back over the Stage 6 break, is laying the foundations for a Giro win. He put significant time into everybody save his own teammate, Kloeden, and Bruseghin of course, but he’s iffy for the overall.

“The Cobra” (Riccardo Ricco) didn’t do so well, 2 minutes off the pace and “The Killer” (Danilo Di Luca) didn’t kill anyone as he was just over a minute slower than Bruseghin, he did say in his interview that he was impressed by the times of Contador and Simoni as he thinks they will be a bigger problem in the hills than Bruseghin. The Pink Jersey, Giovanni Visconti put up a good fight to finish within 4 minutes of the stage winner Bruseghin and hold onto the overall lead for another day. 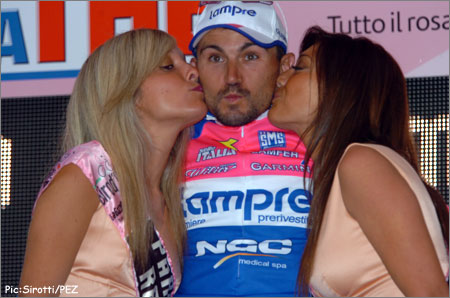 Great stage for Bruseghin, Kloden and Contador, not so good for Di Luca and Ricco, its still a long way to go to the finish, but I think a few things are a bit clearer, the best thing to have happened to day was that “Super Ricco” didn’t have much to say at the finish! 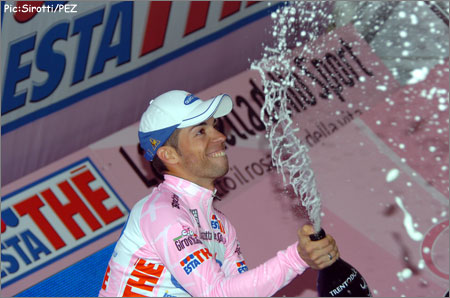