On a day that promised a salvo of fireworks on the grueling slopes of the dreaded Mortirolo, the changes were closer to the cap gun variety. Di Luca blew, Sella flew, and only 4 seconds separate the top 2. But with everything on the line in tomorrow’s final stage, this is what makes top class bike racing.

Everyone expected – and hoped for – the kind of explosive racing we’ve seen these slopes before – Hampsten’s ’88 Gavia epic, the Mortirolo’s escapade of Pantani in ’94, and Basso in ’06… but with only 21 seconds separating the top 3 contenders – and Sunday’s individual time trial still to come, the riding was defensive. 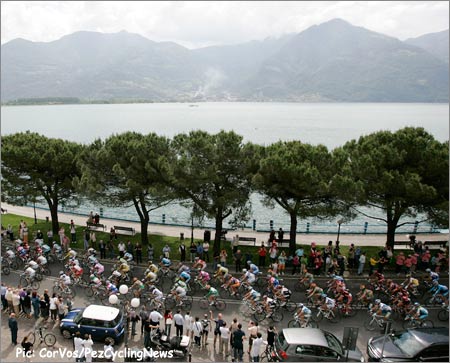 Rolling out beside Lago d’Iseao… nice day for a ride, right?

Had the race crossed lesser mountains, we’d have seen a battle royale for sure, but with the 2618m high Passo Gavi and the 1854m Passo del Mortirolo the day’s main obstacles, it was very likely the corsa and the weather that dampened any personal hopes for glory. 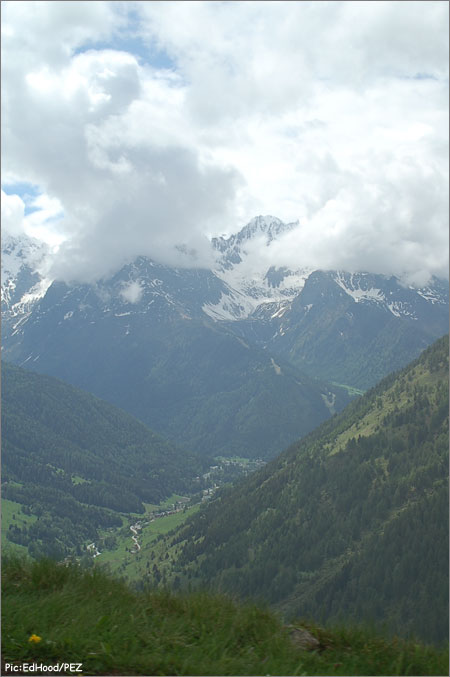 The day even started nicely on the Gavia… but that did not last long.

The day started out well enough in Rovetto, but the Gavia has a reputation for delivering the ugly stuff, and today threw down fog, rain, snow, cold and treacherous roads – enough to slap even the hardest of hardmen into survival mode. 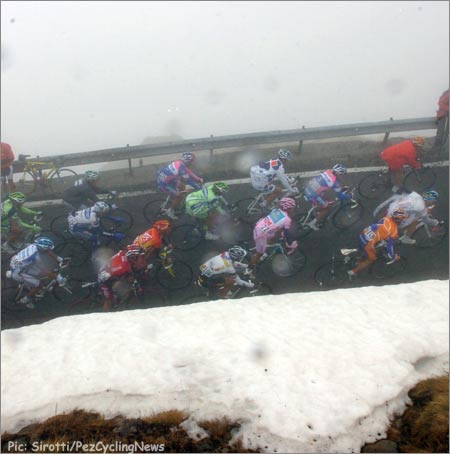 Onto the Passo Gavia – reknowned for terrible weather during this race, and the gc boys all stayed together – biding time for what lay ahead. 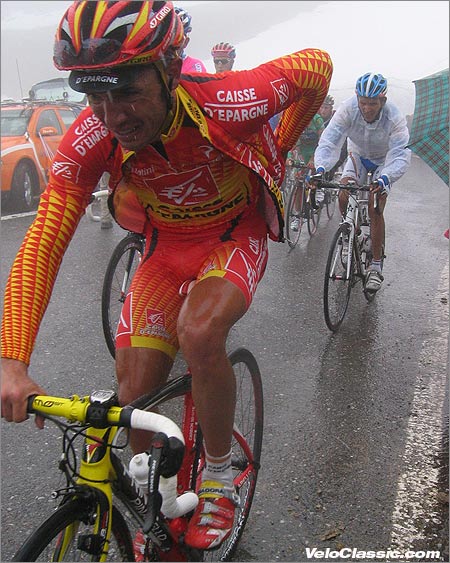 Passo Gavia – over the top and things are wet & cold. Spanish Champ Rodriguez wonders what the white stuff is. 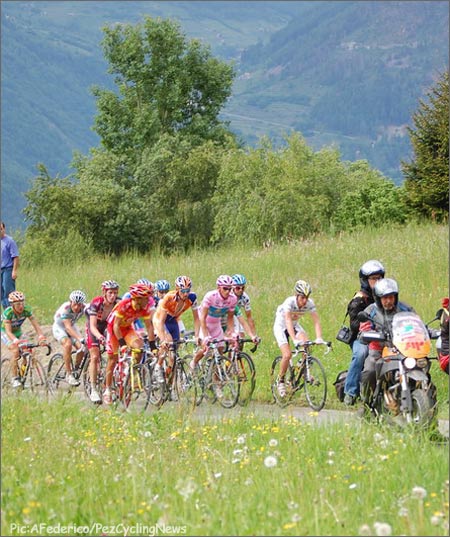 Onto the Mortirolo – everyone was watching everyone.

And the main contenders stayed together – over the top and down the twisting descent to Bormio, then down the fast valley to the base of the Mortirolo. Onto the 13km long Mort’ it was time to watch the rivals and see if anyone had the guts to challenge the 18% slopes. 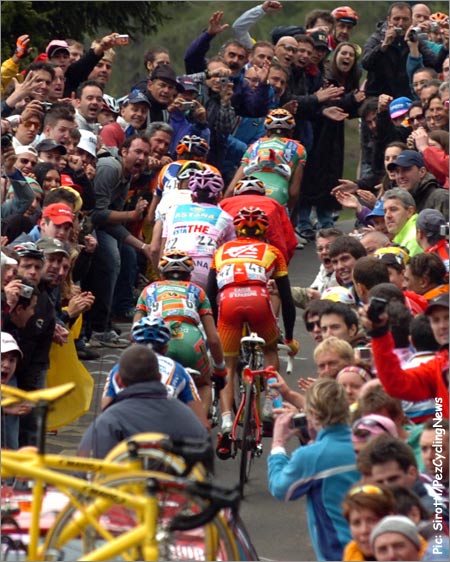 The crowds were immense on the Mortirolo, which offered it’s obligatory slimming of the lead group, but did not detonate like in past years.

Finally, around the halfway point, it was double mountain dipper and KOM maglia verde Emanuele Sella who’d had enough and struck out on his own. He was given his freedom, and not long after it was 2007 Vuelta champ Denis Menchov who gave it some stick. Both bids were reabsorbed by the leaders over the top and on the 30km long descent to the valley floor at Edolo. 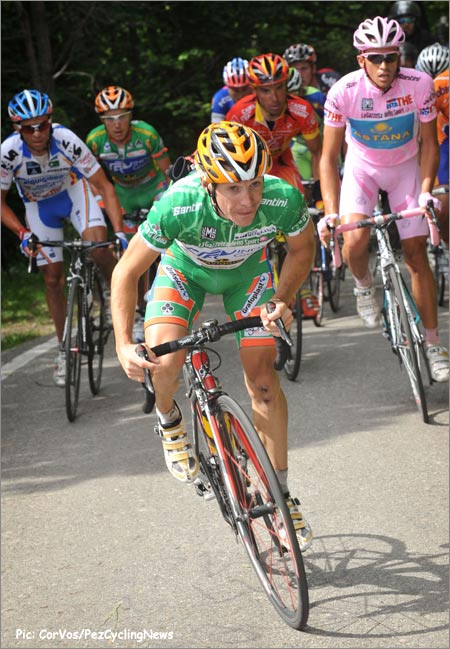 Sella makes his move on the Mortirolo. In spite of being caught on the descent, he still had enough left for one more go. 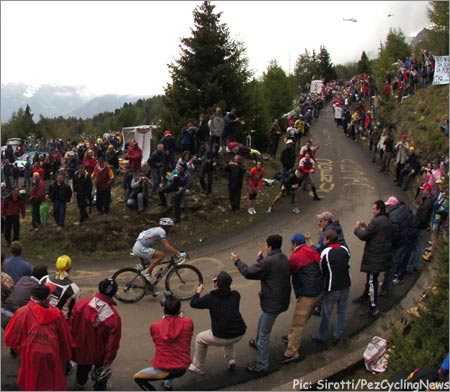 Yesterday’s hero Danilo Di Luca had nothing left for today, getting dropped and watching his gc hopes die on the Mortirolo.

The final ‘climb’ of the day rose from here to Aprica – but compared to what the race had already seen, it was nothing more than a gentle rise over 15km. The impatient Sella went again and big ringed it all the way, taking time on everyone. 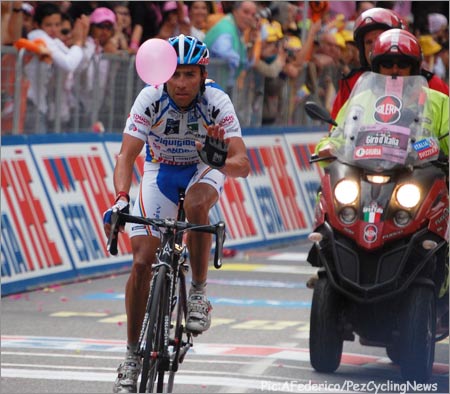 After a valiant effort that rewarded with 2nd on the day, Gilberto waved ‘arrivederci’ to his beloved Giro.

Then Simoni followed – after suffering like a dog on the Mortirolo, where he was dropped but rejoined several times, he too threw it all into a final bid. And for a guy not known for his TT skills, he made some ground and even carried on to second for the day. It was an inspired effort in likely his last ever Giro. 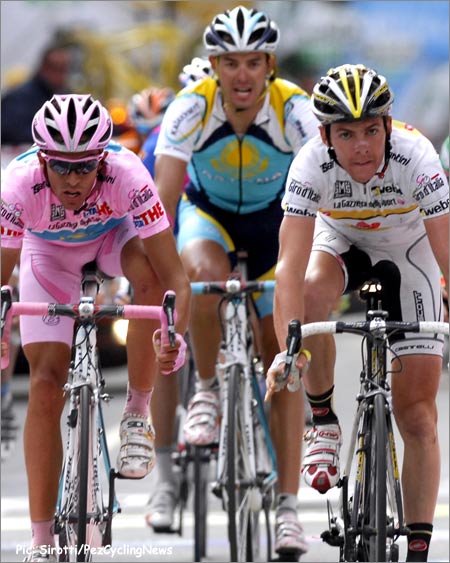 What’s 4 seconds going into the final stage tomorrow? It’s nothing if you’re Alerberto Contador and can time trial with some prowess, and it’s a chasm to cross if you’re Riccardo Ricco. But it’s still not over…

Into the finish it was Sella on his own – going for his 3rd mountain stage win, and very likely setting the stage for a new team and a fat contract for 2009. Simoni was next and Spanish champ Rodriguez came home for third, and at 1:30 down were the gc boys – Riccт, Contador, Bruseghin, Pellizotti et all. 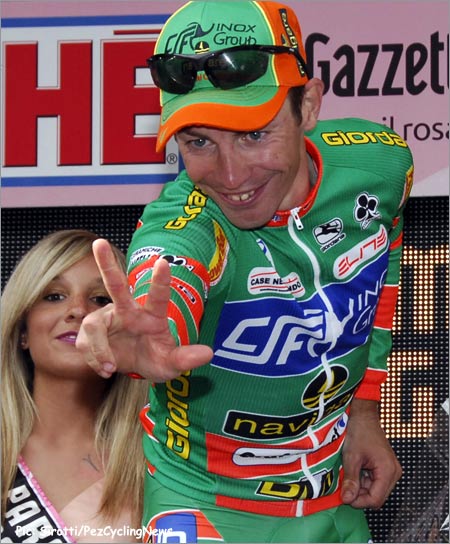 It was not the slugfest I expected, but the upside is that tomorrow’s final TT into Milano will be a nailbiter – it may be the closest gc battle of any grand tour going down to the wire.

PEZ will be there for all the action, and will have lots more reporting t come next week – so don’t touch that dial!