The official Giro corsa announcement comes this Saturday in Milano, and of course we’ll be there – but news and rumors of the 2008 layout have already been leaked around Italy. Although no one at RCS is talking on the record… we’ve got as good a reason as any to believe our sources. Here’s a sneak peak at the 2008 Giro corsa…

The beauty of the Giro can be found in a lot of things – it’s the first Grand Tour of the year so we’re primed for some big racing action; the geography and countryside is arguably the prettiest in all of cycling, making for three weeks of incredibly picturesque stages; and the Italians love to throw in some of the twists that no other race – or Grand Tour – could. Remember the race-deciding climb over the hard-packed Colle della Finestre in 2005? Or the 2006 race start in Belgium? How about this year’s ascent of the cookie-woofingly steep Zoncolan? And Andy Hampsten’s epic ride through the blizzard-covered Passo Gavia that won him the 1988 Giro is legendary. 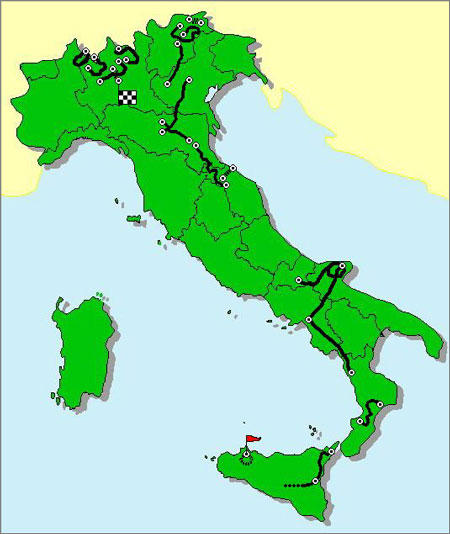 We expect the 2008 corsa to start with a TTT in Palermo and finish three weeks later with an ITT in Milano. That’s right – an Individual Time Trial – woohoo!

2008 looks like another great race awaits – that is if the corsa looks anything like this – And after the 2008 TDF route set the stage as solidly ‘middle ground’ in terms of nail-biting stages, this Giro route could eat up your fingers and then your toes…

The race will start May 10th, and run through June 1, and this time kicks off on the soccer ball island of Sicily (first return since ’93 if memory serves…) before competing week one with a few more more stages around the toe and ankle of the boot. A transfer north then sets up the final two weeks running through the central provinces an onto another brutal final week through the Dolomites, northern Alps, and finally to Milano.

But it’s the stage details that make this really interesting, and our man Alessandro Federico has been busy sorting the rumours from the facts to present our side-door sneak preview. 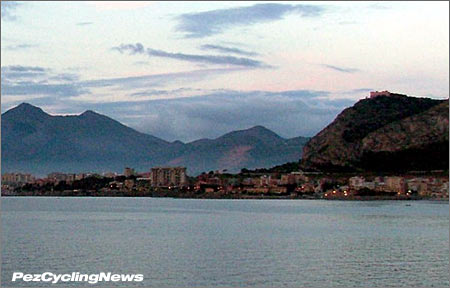 If our sources are to be believed (we know a guy who knows a guy who’s nonna’s hairdresser’s pizza maker knows a guy…) the city of Palermo should host the big start, and the TTT will charge around Monte Pellegrino on the right.

Route Anticipation: Known Unknowns
Here’s what we know – which is all completely unknown until Saturday… but come along for the ride- it’s a good one…

Week One
There’s no denying the Italians love to please the crowd – so regardless of what the ASO does, we’ll get a taste of Team Time Trial action on day 1 in Palermo with a circuit loop around the Monte Pellegrino, much like they did in 1954 (that Giro won by Clerici). 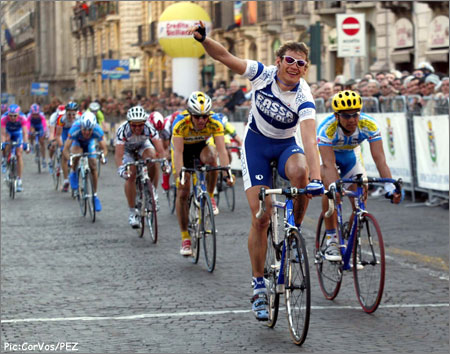 If the traditional finish in Catania is used, cobbles will be in effect – a very young Pippo Pozzato won the Giro di Catania a few years back.

We expect 2 more stages in Sicily; one arriving in Catania in the shadow of the active volcano Mount Etna, and the other one in Messina (2 sprinter stages). 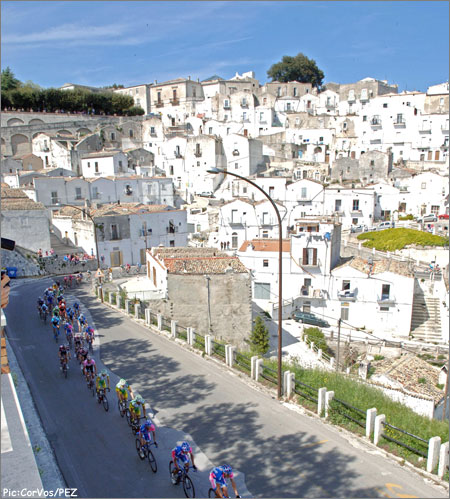 The Abruzzo is a lovely setting for the Giro, then again, can you think of an area in Italy that’s not?

We suspect the RCS has learned how to transfer the race by ferry to regain the mainland, at least we hope so as no one wants a repeat of this year’s debacle from Sardinia, but come hell or high water (or both), stages 4 & 5 start at the soul of the boot with one complete stage in Calabria (homeland of the PEZ’s inlaws) on Tuesday (Appennins) and the other one to Salerno (Contursi Terme) on Wednesday. 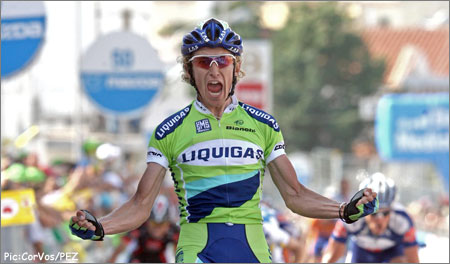 Peschici provided the venue for a thrilling finish for the Giro a few years back – Axel Merckx went solo late only to be caught by the field and the Dolphin stormed uphill sprint.

On the Thursday the 15th , stage 6 heads west to east to the beautifull Gargano region with finish in Peschici or Vieste (Appennins again).

Our sources get a little fuzzy here, as for Friday we’ve seen talk about a loop stage in the Gargano region, Peschici – Peschici. But what’s sure is the first mountain finish to 1395meters on top of Pescocostanzo (Abruzzo) on either Saturday or Sunday. 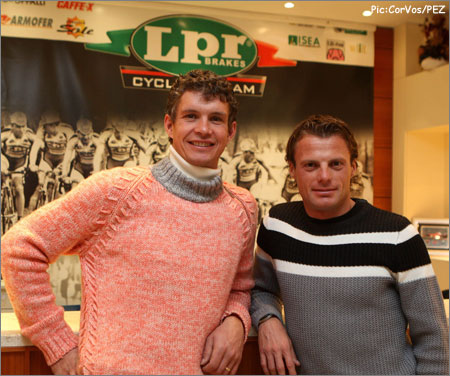 There’s a former winner on a new team this year, who is teaming up with another former winner who just happens to be from the Abruzzo…raise your hand Mr. Di Luca.

Week Two
Here’s likely where we’ll see the first transfer day – up the boot leg to the first ITT from Pesaro to Urbino – right in Ale’s backyard on the Adriatic. It’s a 30-35km ITT from the coast to 500 m altitude to ancient town of Urbino. Still some confusion on the timing: ITT on Sunday and rest day on Monday? Or rest day on Monday and ITT on Tuesday? 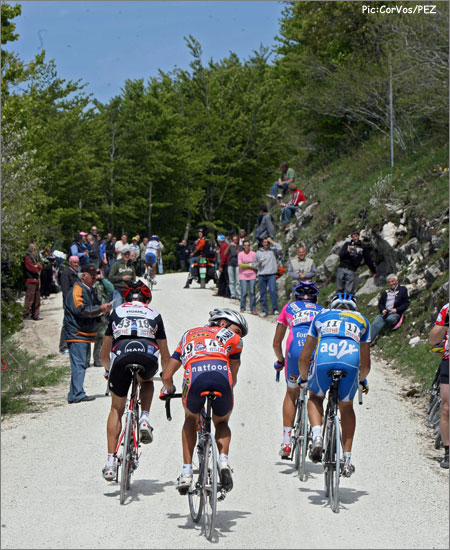 Pantani’s old stomping grounds are lumpier than an old mattress – and his favorite roads aren’t all paved either. Look for a fantastic stage here.

Our sources are sure we’ll see a stage Urbania – Cesena through the Appennines with some interesting climbs like Carpegna and Sorrivoli. The final 40 km will be the same of the stage arrived in Cesena in 2004 (Sella won) – in fact, PEZ’s Jered Gruber reported these parcours as going “from coastal flat, dull, and boring to Ardennes madness with numerous short, steep climbs whose grades often resembled a high-schooler’s age.” Should be good.

The next two days from Forlм to Carpi and Modena to Cittadella are for the sprinters. 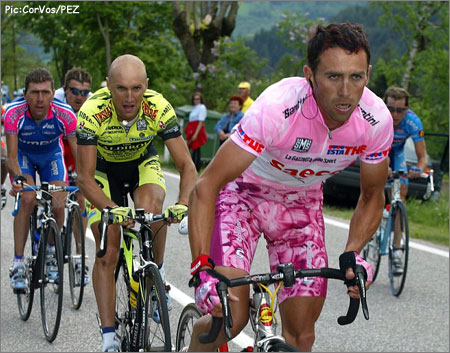 Last time the Giro visited the Alpe di Pampeago, Simoni showed all comers who the grand master bad ass was.

Things then start to really rock with a great stage from Verona to the Alpe di Pampeago. The final climb (2nd summit finish) returns after 1998 (Tonkov), 1999 (Pantani) and 2003 (Simoni). This is a very difficult climb and will sort out who’s really gunning for gc. 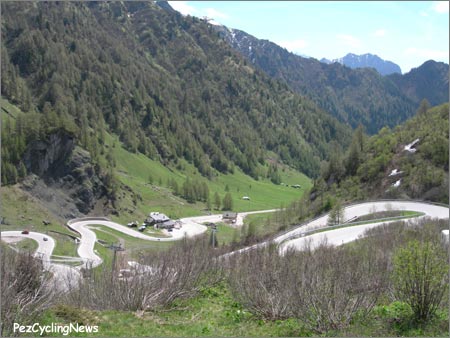 The climb up the Marmolada is nothing short of grunt ugly tough.

We are now in the Dolomites – steep climbs, sketchy weather, and leg breaking days: starting from Arabba the “big one” waits for the riders. The Passo Pordoi (just after start), San Pellegrino, Giau (same side of this year), Falzarego and final one on the Marmolada (PEZ rode these climbs in 2006.)

After this queen stage comes what could be considered this years’ ‘Court Jester’ stage the ITT climbing the Plan de Corones starting from San Vigilio di Marebbe. Steep pitches, dirt roads, possible snow… It will be the ‘event’ of the Giro 2008.

Week Three: Big Climbs
But as has become a Giro tradition, the final week gets tougher before it’s over: two stages involving Switzerland mean lots of Lombardia-like climbs: Mendrisio – Varese with final loops of the World’s circuit and a loop Locarno – Locarno.

Then on the final Friday we expect a great stage in the Bergamo valleys: Castellanza – Monte Pora (4th finish on the top). It’s a new climb for the Giro (13 km with 8% average slope) preceded by the Presolana (climbed as final in the 2004, Garzelli won, Simoni second – after going over the Mortirolo). 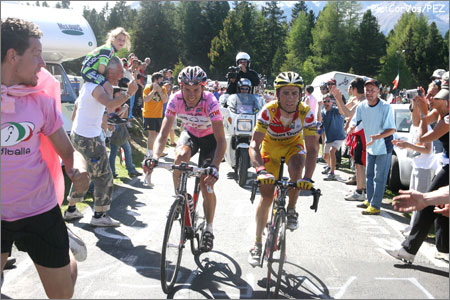 Remember Basso and Simoni on the Mortirolo? They were in a class of their own, and then Basso was in a class of HIS own when he rode Simoni off his wheel on a false flat, but hey, that’s another story entirely!

On Saturday there’s another big mountain stage. From Rovetta to Tirano in Valtellina. The route of this stage is not well known but what looks sure is the climb of the Mortirolo, (PEZ rode it in 2006) then a descent before the climb to Aprica, before Aprica on the right climbing Santa Cristina and then descent in Valtellina to Tirano. How they arrive at the Mortirolo we’re not exactly sure, possibly via the Gavia coming from the Valcamonica or San Marco coming from Val Brembana. 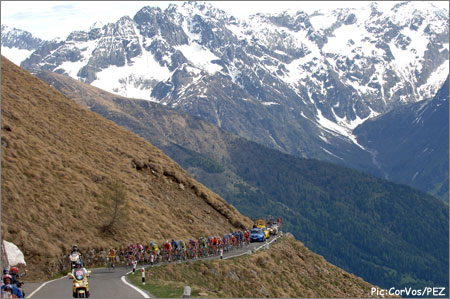 Will we be treated to the classic Gavia-Mortirolo double?

Finally, the grand finale on Sunday departs from the traditional sprinters’ parade throughthe streets of Milano – to what could be the most exciting stage of the entire race: an ITT from Cesano Maderno to Milano 30-35 km. 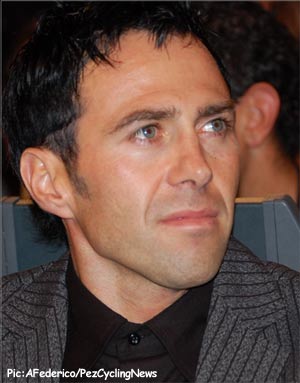 This will be a good one – geez – I’m spent already and I’m just writing about it… We’ll know for sure come Saturday, so keep it dialed to PEZ!

And The RAPHA WINNER Is!