Giro Di PEZ: Another Day At The Giro?

“Bibione’s Dolphin,” that’s “Pello’s” other nickname. It says so on his Cannondale; we were on “foto” duties, trying to dodge the Mendrisio rain that made riders hide in cars, when we bumped into designer, Stefano Barzaghi of Barza Design, at the Liquigas bus. 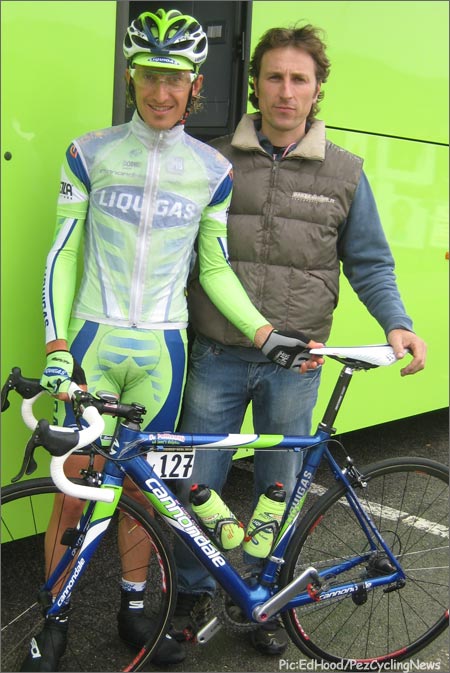 Rory Mason of Cannondale had kindly arranged for Liquigas head honcho Mario Scirea to let us play with Pello and Benna’s Super Sixes. Given that Mario was once Cipo’s main locomotive – a man who could drive the express at 60 kph – and was known to ride outsiders who had infiltrated the train into the barriers, decking himself in the process – I was a tad nervous about approaching the great man.

I showed him my Pez card and mentioned Rory’s name, Mario looked at the Pez logo, grunted and pointed at the two lovely machines, glistening like jewels in the Swiss rain.

I took this to mean that we had access to the bicycles.

The gray day was much better suited to a ferry ride than 3 hours in the car.

As we snapped away at Pello’s (or is that Dolphin Boy?), blue metallic Super Six, Stefano introduced himself as the man that does the trick paint jobs for the stars. As well as Pello, his creations grace the frames of Bettini, Boonen, Devolder, Paolini and Pozzato. “Franco wanted something different from the rest of the team for the Giro and this was the result.” 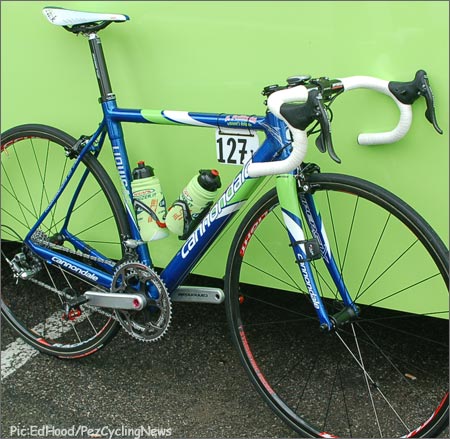 It’s metal flake blue with Liquigas green and blue hi-lites – style is everything to guys like Pello. (Check out his site at www.BARZADESIGN.IT)

We had just finished snapping the Super sixes at Liquigas when Pello and Benna appeared down the bus steps – more pictures! Bennati in particular looks a picture of glowing health, anything but exhausted after 17 stages.

It was raining over Maggiore this morning; the mist on the water defeated the auto-focus on my Nikon, the little Canon IXUS captured it just fine though.
We caught the ferry across the lake from Verbania to Lavena, saving ourselves hours of frustration on twisting, turning roads in the process.

We had a photography schedule for this morning; Liquigas for Pello and Benna’s bikes; Astana for Bert’s bike; Lampre for Bruz’s bike and High Road for Cav’s bike. 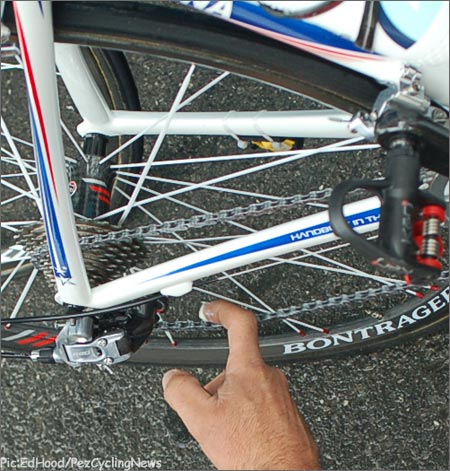 Over at Astana we got our pics of Contador’s bike, before the mechanics smeared the chains with grease for the rainy stage to come, just like mechanics have done since forever.

High Road’s New Zealand mechanic, Benny Devcich was happy to show us Cav’s double stage winning Giant, we’ll have full details for you in our forthcoming ‘bikes of the Giro’ feature, but one thing we can tell you just now – it’s light!

At Lampre, no one speaks English, but the pictures were taken, language barrier or not! 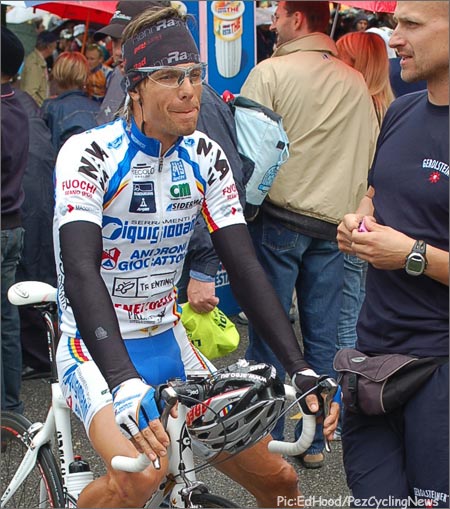 At the entrance to the village, there was Danilo Hondo, we’ll be looking at his Guerciotti soon. 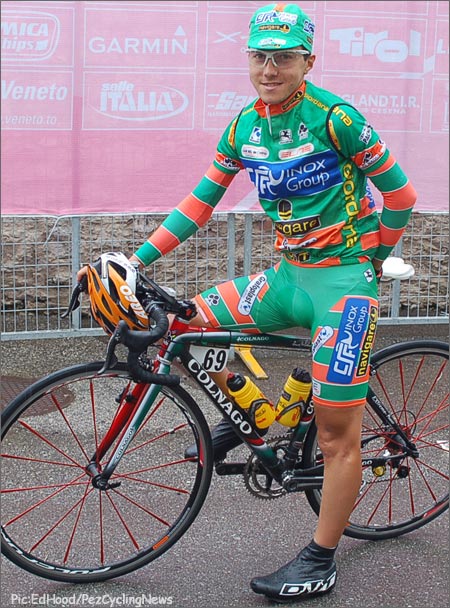 Our occasional commentator Viktor, always protests that he can’t take climbers seriously because they look like schoolboys – in the case of 2008 anti gravity revelation, Navigare’s Pozzovivo, he might have a point. 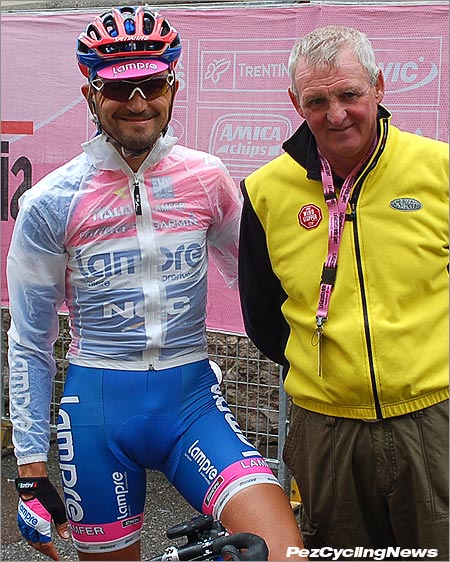 Today Dave pledged to use the exact same smile in all his pics… let’s see how he does… starting here with Bruss.

Bruss was happy to pose with Dave; when I told him we wanted to see him on the podium in Milano, he gave my arm a squeeze and flashed a big smile. 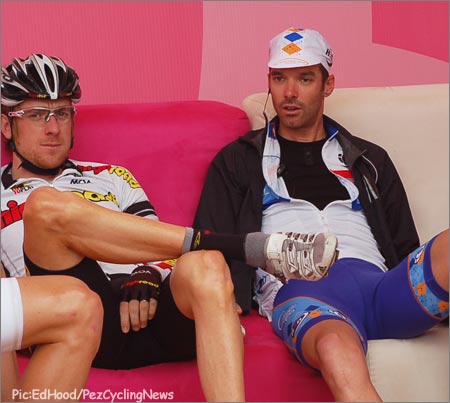 Brad Wiggins, Mark Cavendish and Dave Millar were hiding from the rain (and us journos) in the village. 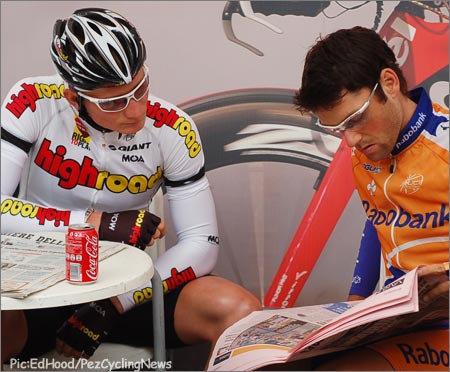 Andrй Greipel was trying to suss out what the Italians had written about his stage win and Danilo Di Luca was sitting quietly, thinking; “it was different last year!” 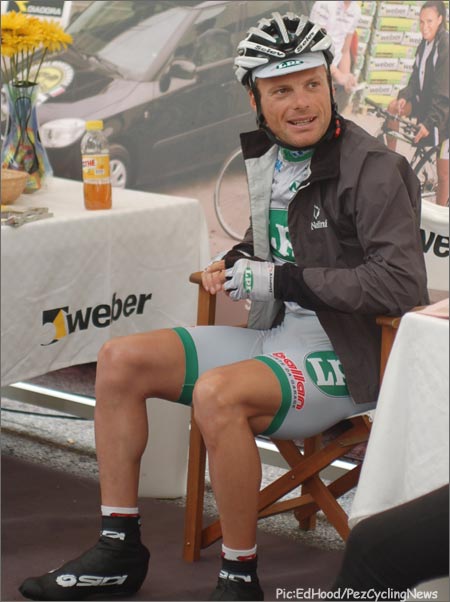 The red wine and cheese looked good, so I cracked – I even let Dave take my picture! 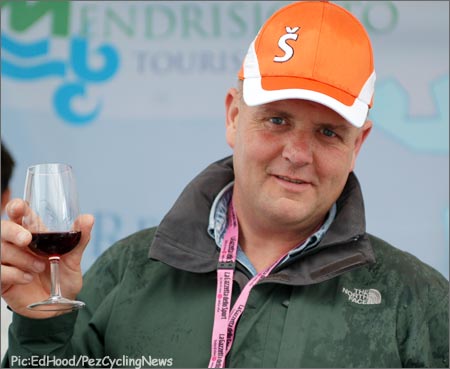 As we headed off to the start I spotted a tall slim, stylish dude – Super Mario! 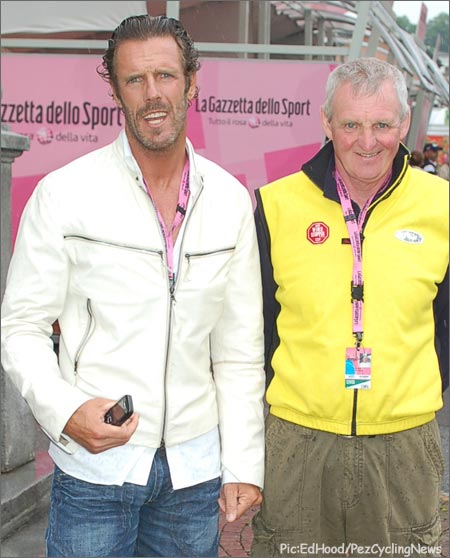 I chased him through the throng to get a shot of him and Dave together, in typical Cipo fashion, he was hollering at me because I was taking too long!

We’d decide to just cover the start today to let us catch up with feature work in the press room; but we managed to catch the race as it completed the starting circuit. 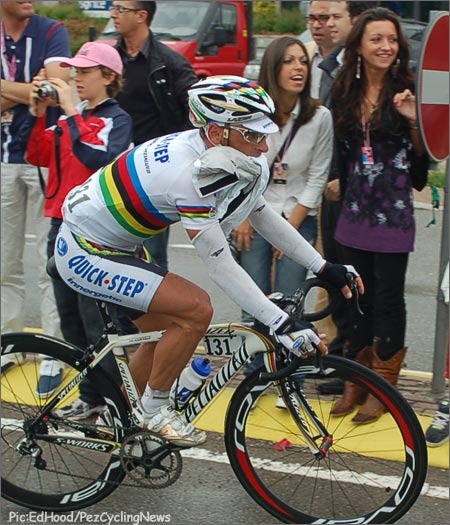 The break swished past, well clear already; Bettini was there with team mate Visconti and so was break away specialist (and eventual winner) Voigt, riding hard already – surprisingly, so too was points leader, Benna! 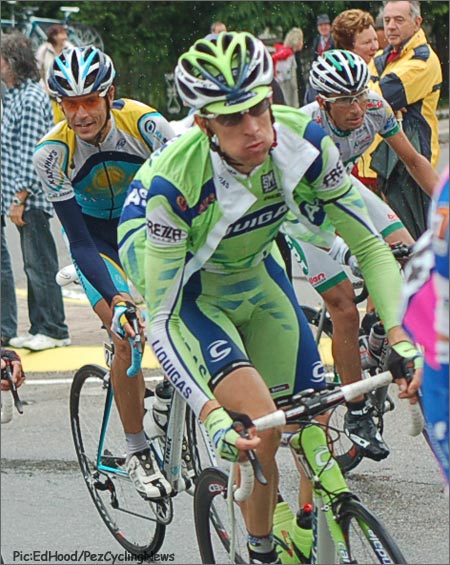 Astana were getting left to chase and even though it was early, it was hurting for a lot of riders, Charly Wegelius puffed his cheeks as he rode past.

As we stood by the roadside, it bugged me that I knew the face of the guy standing beside me; “corridore?” 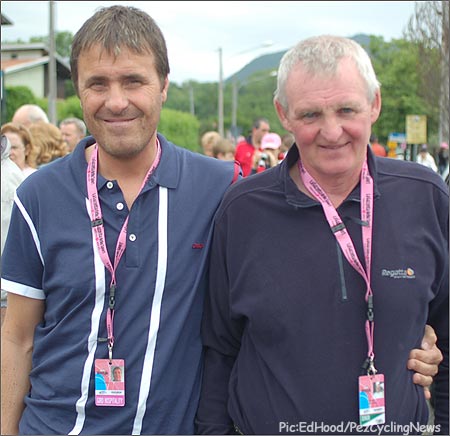 Ex-pro Luca Scinto gives Dave a squeeze, but to no avail – Dave goes sticks the 3-peat with his trademark smile!

“I was a pro, yes, my name is Luca Scinto, you’ll know me from Mapei and QuickStep days.” Luca manages an amateur team now and was responsible for grooming QuickStep’s Italian champion and pink jersey holder (and second on today’s stage) Giovanni Visconti up into the pro ranks.

We asked what it was like to work for Patrick Lefevre; “an excellent team manager, the best!”

And who will win the Giro? “Contador is strong and in a good position, but watch for Simoni on Saturday on the Mortorilo!” and he pulled his lower eye lid down at me – you heard it here first!

Now, how do we get to that press room?