My drive from Agrigento to today’s start in Pizzo took close to 12 hours, the B&B had sketchy internet, and now I’m up the road in Cosenza, watching the stage end on tv… But chasing the Giro isn’t just about a bike race, it’s an experience of another kind, there’s always something new to be learned…

This is my sixth trip to this race, and I’ve discovered my annual two week journey is never what I expect, but always unforgettable. The long transfers between stages this time have been tough – there’s nothing I hate more than sitting in the car when I’m in Italy – but I’ve already seen the three coasts of Sicily, and now the toe of the Calabrian boot, and driven hundreds of kilometers – and we’re only 4 stages in. 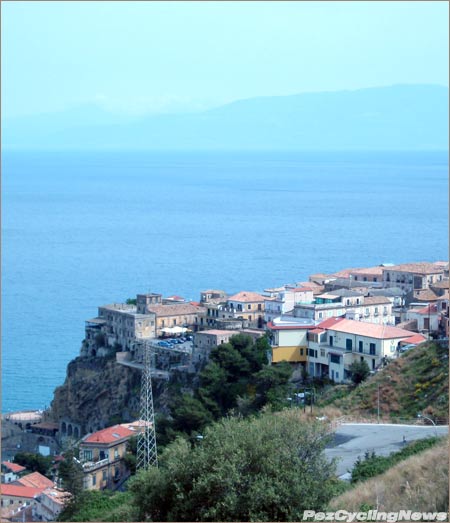 Pizzo Calabro – a tiny and ancient town with barely enough room to host today’s start, is set spectacularly on a cliff above miles of white sand beach.

I’ve no idea what’s coming tomorrow, but the last couple days have been revealing – as I’ve learned some things about myself, and about the people who live here.

The F-Bomb Quotient (FBQ)
This trip I’ve been gauging my daily success by the number of times the F-Bomb either enters my mind or passes my lips. It can be influenced by many things, not the least of which includes general fatigue from the long travel from a far of land. Foreign language problems also impact – especially since my Italian sounds a lot better than it actually is – which usually leads to the locals launching into some huge conversation thinking I can understand what they’re saying. Italians do love to talk, (and why not when the language sounds so good?), but where as I’m generally a ‘get to the point’ kinda guy, the Italians love to restate a topic several times in different words… often never actually getting to any point what so ever. 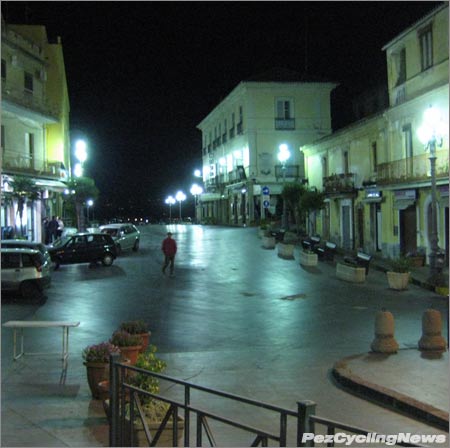 The town main town square was empty last night, while in another part of town Giro roadies were working way past midnight to set up the villagio di partenza and other race structures. I finished dinner at 11, and they were no where near being ready.

Per esempio (For example) – a couple nights ago at my B&B, my hostess asked me to translate an email from a prospective client (written in English), who wanted to know if there were a lot of stairs in the B&B because her 80 year old mother has trouble with stairs. So after I explained the question, the lady of the house proceeds into a big discussion- in Italian – about if I thought an 80 year-old lady could get up and down her stairs…. I could barely understand half of what she was saying, let alone knowing the kind of physical condition of some 80 year-old Swedish lady I’d never met… 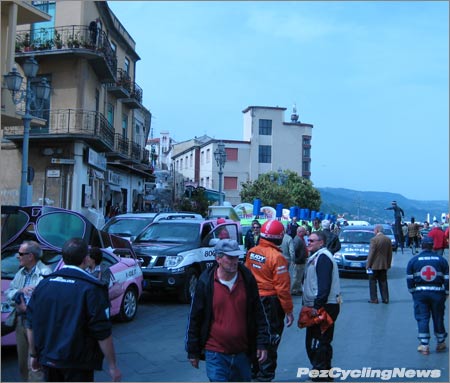 By this morning, everything was done and the Giro circus was open for business. Minutes after the race left town, the roadies were pulling things apart for set up in the next town tonight.

But that’s also what makes this country and its people so much fun – they do have their own way of doing things.

Last night – for another example – I finally arrive in Pizzo Calabro about 730 PM, after having taken 2 hours to travel 100km from the ferry because about 75km of the autostrada – which normally allows for ‘fast as you dare’ driving – was only one lane due to construction. Please note that I only saw about 3 kms of actual work being done. 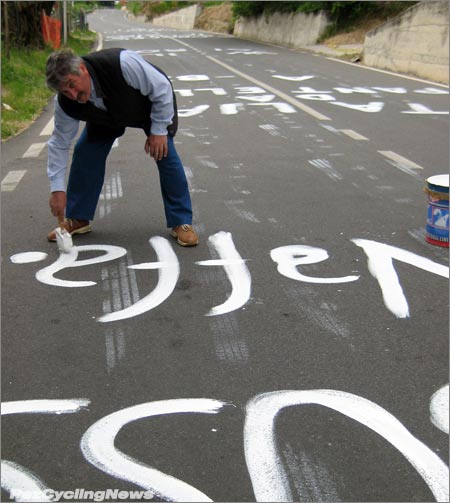 He may not be Michelangelo, but he gets the point across.

It was during this period while I was driving 60kmh where I’d normally do 140, that my F-Bomb quotient was especially high.

So getting back to my point… (if this seems to be taking a while – it just could be the Italians rubbing off on me). My B&B in Pizzo was my only reservation that never actually confirmed with an email, so I figured I’d just call ‘em from Sicily a couple days before I arrived. But… my calls from Sicily went unanswered – the phone just rang, and rang. I tried for 3 days and never got through. 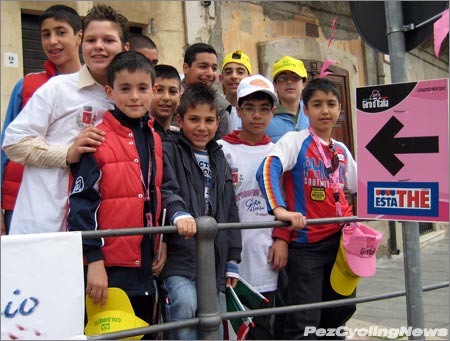 Just pull out the camera, point it at a Giro course marker, and a swarm of kids appears in seconds.

But this is Italy, Pizzo is a small town, and as the B&B did confirm via phone call two months ago, and I figured everything was cool. So I arrive in Pizzo, find the B&B, and knock on the door.

No answer. I phone again. No answer. 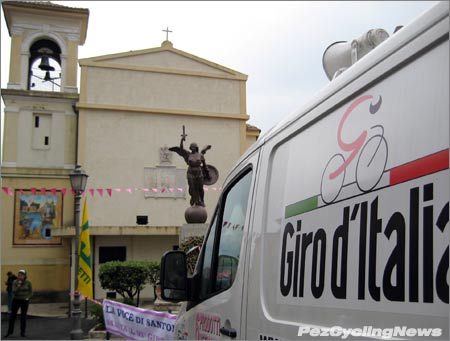 One of these things will sell you salvation for only 3 euros… the other is free.

I’m pretty tired at this point, have a splitting headache, and really just want something to go easier than the day has – and my FBQ is nudging up to 80% by now. 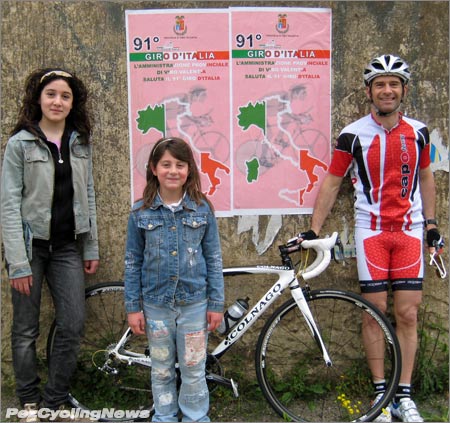 My Capoforma ‘Diavolo’ kit was a huge hit on the roads today.

I wander back into the town square, and start asking locals if they know who owns the B&B. By some fluke – the first guy I ask – a local barista – points to a guy across the piazza, standing in a second floor balcony, talking to a group of Italians in the square below. 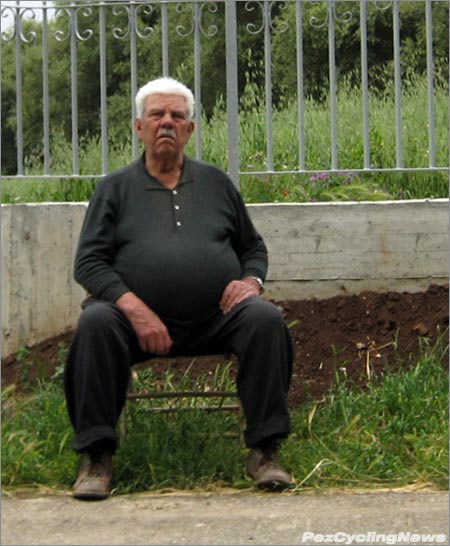 My ride over the first 30km of today’s corsa revealed many a local patiently waiting for the race to arrive … two hours from now.

On over I trudge, call out to him and he recognizes my name, gives me a huge smile and welcomes me to Pizzo. Then he explains he’s busy hanging banners to decorate the piazza for the next day’s start, and would I mind waiting until he’s done…

If I wasn’t laughing to myself at the complete Italian-ness of this situation, I’m pretty sure the FBQ would have hit 100%. 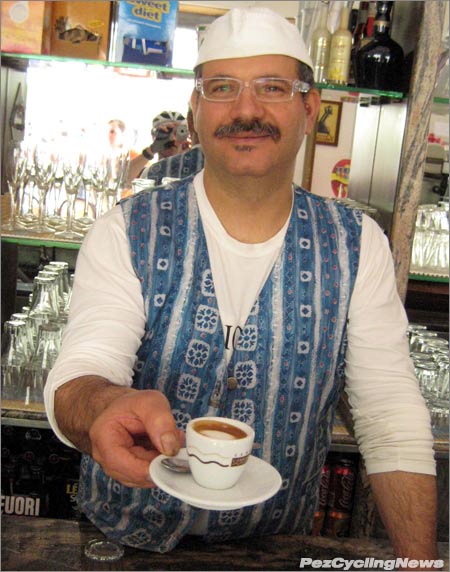 Now that’s coffee the way it should be served. The only ‘venti’ here is the number of these you’ll want each day.

Anyway – He soon dropped me the keys and I let myself in. He had me staying in him & his wife’s room… Their B&B was full – so I’ve no idea where they slept. Although I was awakened sometime in the night by the voice calling from outside my open window:

Turns out I had his last set of keys and two more guests just arrived who needed to get in. So I let ‘em in, and went back to sleep. 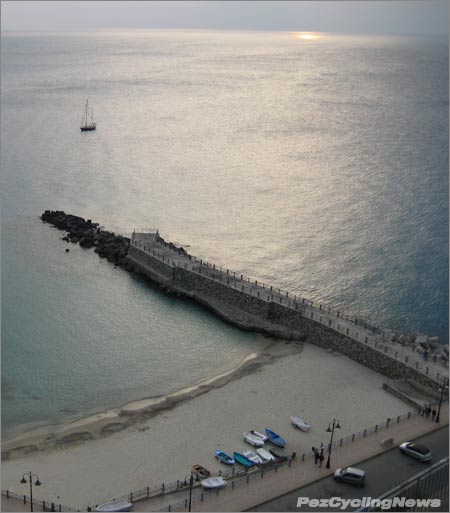 Pizzo Calabro is an ancient fishing village. The walls of local shops are plastered with archival photos from the days when fishing for huge tuna was the main occupation.

Italy is always an experience – and the best way to enjoy it is to go with the flow. They’ve been here, doing things their way for thousands of years. They’re not going to change. But they are a friendly, warm people, who typically welcome you to their country, and as I’ve found this week, into their homes.

And it’s refreshing to know that even as I often joke about becoming less patient with things around me, that I’m still able to enjoy this different culture. 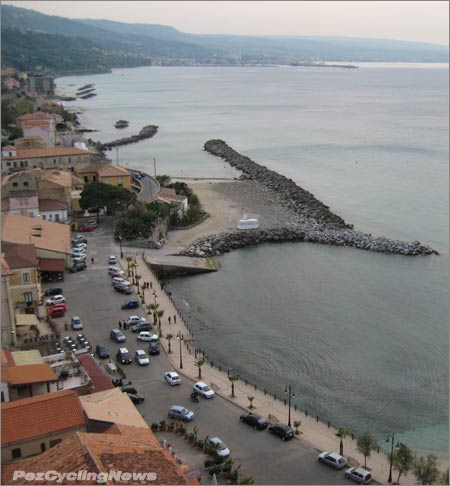 The views along the coast here in Calabria pretty much speak for them selves .

Tomorrow is my biggest transfer day of all – almost 500km, driving across the ankle of the boot to Peschici on the Adriatic coast. Along the way I’ll be working on lowering my FBQ.

Thanks for reading and ciao a domani! 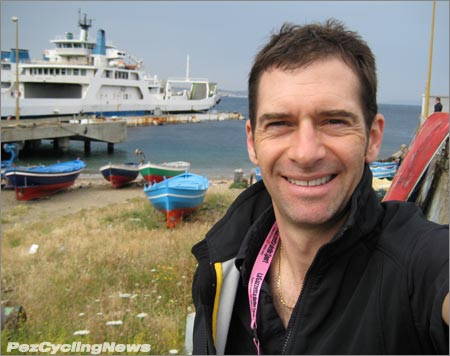