Last night was another late one… I made it out of the press room at 10, back to the hotel at 10:30, shower and out to dinner at 11:00, then stopped in for a night cap at a local enoteca – and next thing I know, it’s 2:30 for lights out. Needless to say, today’s start was somewhat sluggish, but I’m now in Agrigento awaiting the finish.

After the usual confusion of finding my way out of the Palermo maze, it was next stop Agrigento – about 110km away as the road winds. And even in my sleep deprived, post-grappa and moscato induced haze, the local adventures continue – it is a whole new day after all. 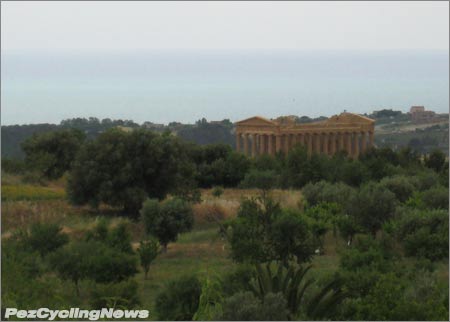 Today’s stage was shaped like a hilly Spring Classic – only with more hills. The race ran from Cefalъ on the north coast to Agrigento on the south coast, and the profile was literally up and down like the saw-blade, with a final climb to the finish. Agrigento has ancient Greek origins, and hosts the famed Valley of the Temples – ancient ruins and all that. The RCS sure knows how to take advantage of every beautiful corner of this country. 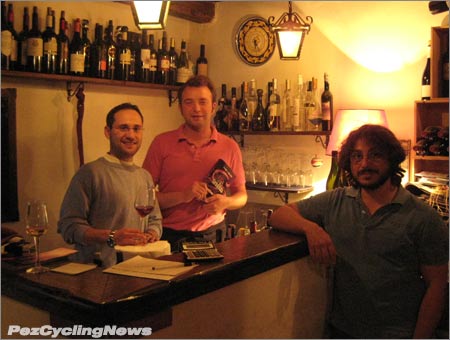 Cristian, Gianfranco, and Fabio made some fine drinking partners at the Canaenoteca – check em out next time you’re in Palermo. 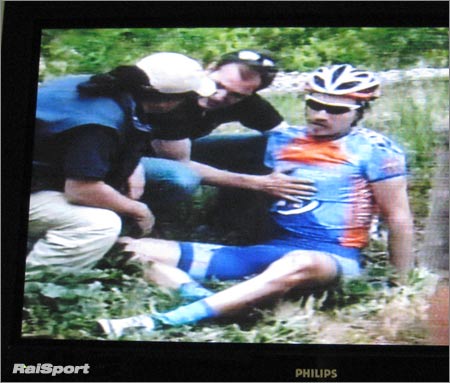 Zabriskie just crashed… nooooooooooooo! Agh…. Ugh. He’s not looking good – he’s sitting up, but they keep checking his chest…. How much does this suck…. 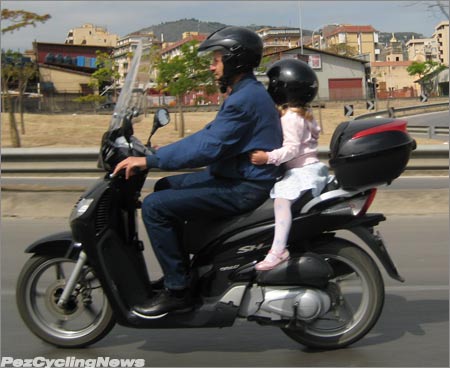 Here’s one for all you traveling dads out there… As much fun as this gig is – every once in a while you see something that reminds of how far we go do the stuff we love. For me it’s half way around the world, and now that my 2-1/2 year old daughter is showing her personality, leaving home is a lot tougher than last year. On my way out of Palermo I pass these two zooming along the highway on the moto – her tiny legs barely fitting on the wide seat, and her little hands hanging onto papa like an old pro… Home seemed just a little further away at that moment. 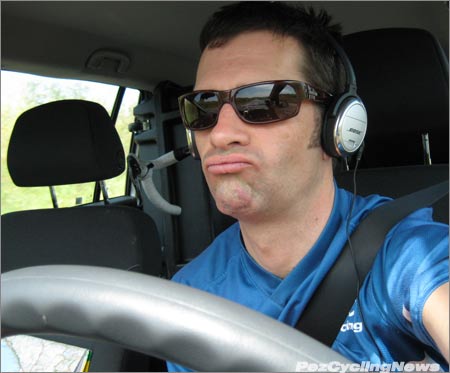 • Okay – I admit that chasing a grand tour is not all the glamour I make it out to be… especially the lonely hours driving cross country between stages each day. It is, however, a perfect time to crank the driving tunes… especially when you’re pining for your loved ones. today was 80’s appreciation with Achtung Baby – . 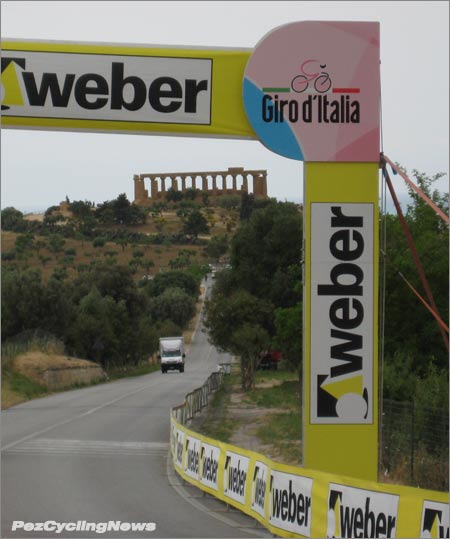 I rode the final 3000 meters of today’s stage to see what that climb to the finish was really like. I’m pretty sure it’s the same corsa they used for the 1994 Worlds back when Luc LeBlanc won. Rising about 200m from the spectacular ruins of the Valley of the Temples, it’s a spectacular setting. The climb itself isn’t that difficult… unless you take it at the end of an endlessly hilly 200km stage… The steepest pitch hits 10%, with an average of just over 5%, which includes the flat final 1000 meters. It’s hard for sure, and really set up the first selection of who’s serious about winning this race. 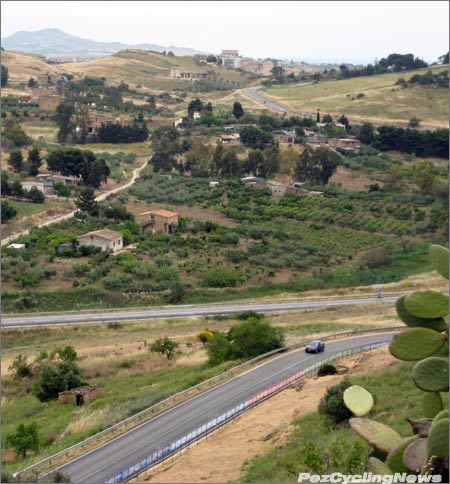 The final climb starts about where that car is, and ends 3000 meters of good grunting later. 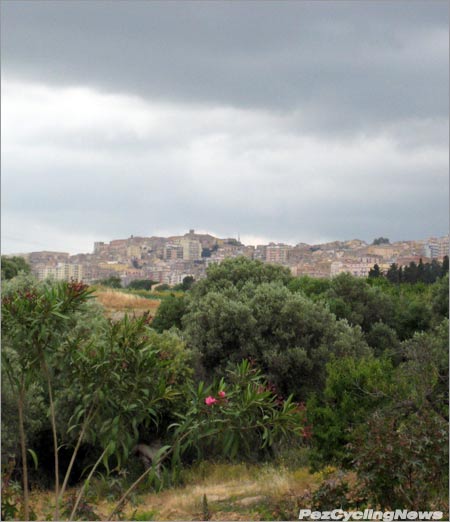 The skies threatened all day, and even spat a few drops of rain, but the cycling gods smiled and sent forth perfect temps for a bike race to Agrigento. 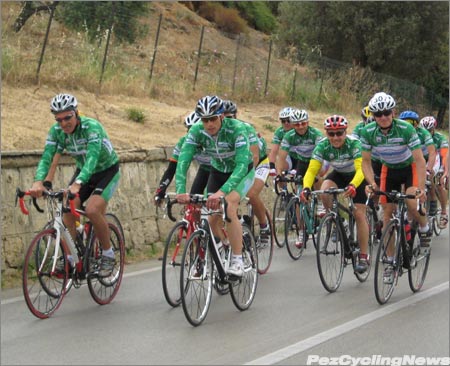 I shoulda hooked up with these guys … there goes Francesco Moser leading his tour group up the final climb a couple hours before the race arrived. 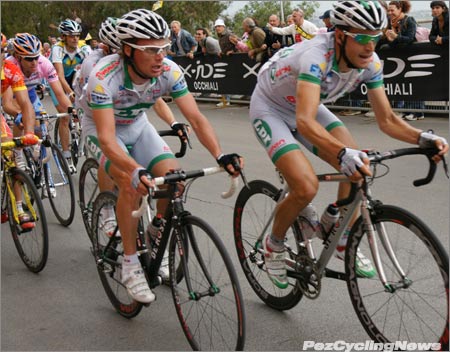 On the first run of two up the final climb, LPR took charge. Di Luca is serious about this race, but Vande Velde ain’t giving up without a fight. 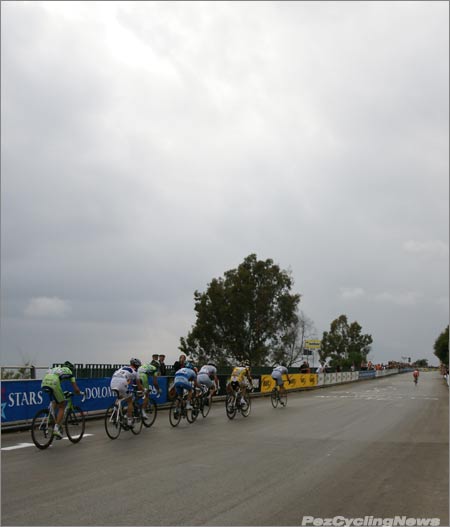 The final lap – Rodriguez is up the road, but not for long. 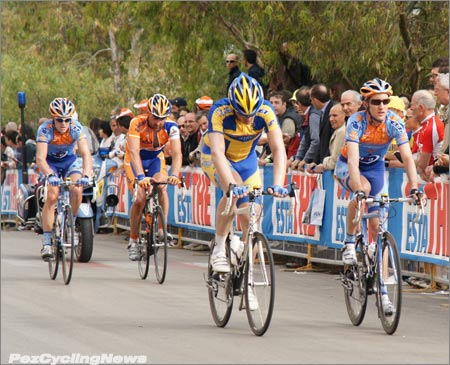 Magnus Backstedt and the Slipstream boys rode like Trojans today – sitting on the front for miles. 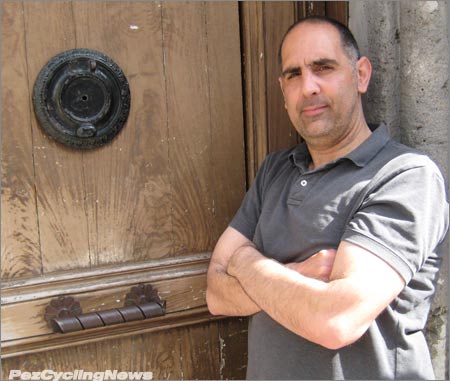 • This guy…. I gotta tell you about this guy. (And it has nothing to do with cycling, but a lot to do with weird coincidences…) Eric looks Italian, because he is Italian – but a Canadian of Italian parents. He’s also one if my best friends and was even the best man at my wedding. I met him for coffee this morning in Palermo. This normally wouldn’t be such a big deal, except that we’ve been pals for about 25 years, but have just not seen each other for the last couple… even though we live in the same city. Then by complete fluke we end up in Palermo (for completely different reasons), and still almost miss each other – until we finally connected 30 minutes before I hit the road for Agrigento. We can’t seem to get it together to meet in Vancouver, but some how it works out half way around the world…

I didn’t get in the big ride I was hoping for… but for it’s only 7:30 and I’m in for a serious shot at dinner by 9PM – ! With everyday comes the need for a well planned strategy – and mine is getting some sleep tonite. Tomorrow it’s another couple hours drive across Sicily to the start in Catania, then more driving, a ferry ride, and more driving to the hotel in Calabria.