Today the Giro moved from the Romagna region and headed north to Carpi in the Emilia. These two regions are administrated as one, but there’s a big difference between the two. I would like to discover today the exact border between these two lands. I always remember a guy who once told me me, “To find the border between the Emilia and Romagna you’ve to walk along the main way to Bologna and, near Imola, start to ask for food and drink. The Romagnoli will serve you wine immediately. Once someone won’t serve it anymore but will propose to you a dish of “tagliatelle”, so, there you’re in Emilia. 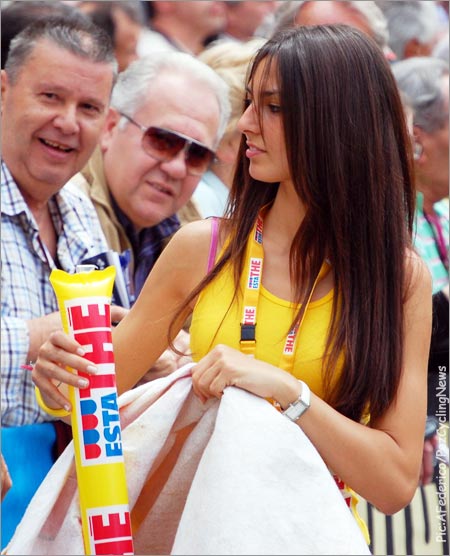 Forlм is in Romagna and there’s no doubt on it. I love the departures because everything flows calmly. The arrivals are much more stressing. Therefore the plan for today is to assist to the departure and move just before it and start asking for food and drink. Let’s go! 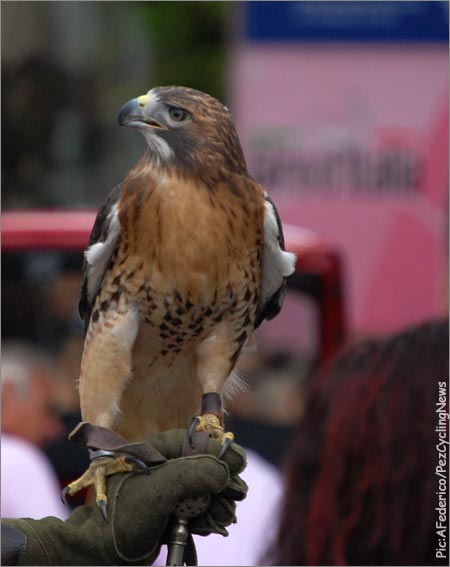 There’s a huge crowd in “piazza” but the riders are late today. The official speaker takes time making jokes to the locals who are appreciating the humour. The hostess distributes the sponsor’s gadgets, an espresso (tests ok), and a couple of pictures to a unusual supporter of the Giro. 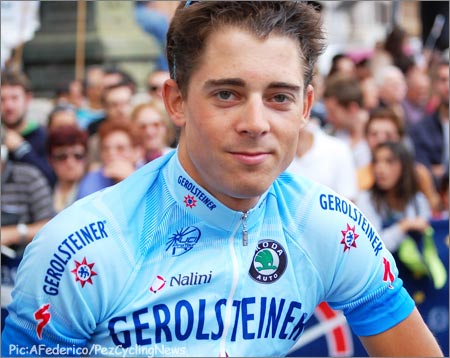 One of the first rider to come for sign on is my new friend Russ. I stop him and he tells me yesterday he suffered the cold on the Carpegna – losing 21 minutes leaving the second place definitively. He lost time on that climb at 100 km to go and was not able to force in the descent which was really dangerous. He’s young he’ll have time to demonstrate his strength. 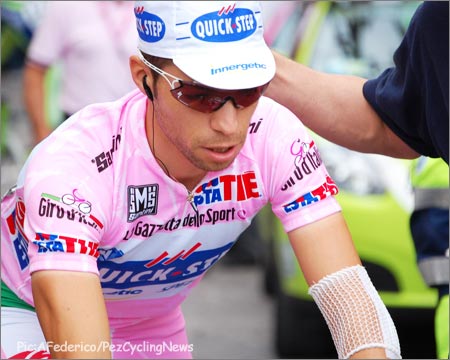 After a crash and rash yesterday, maglia rosa Visconti was bandaged and back today.

Comes also Visconti; he has got a showy medication on the left elbow. He also fell yesterday. It’s time to go and a big thunderstorm in the first kilometres prevents me from stopping and asking for drink. 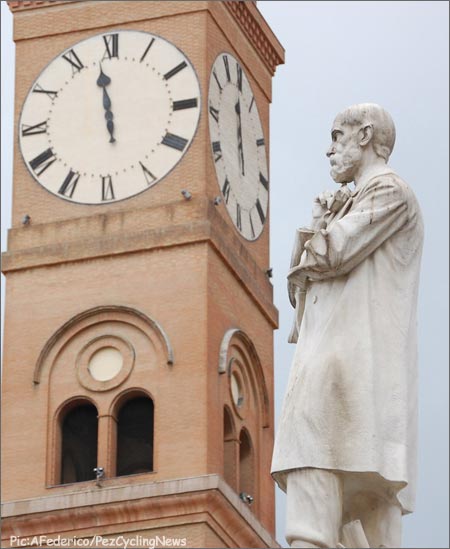 Almost noon and time to go – the race starts in 15 minutes.

I arrive in a nice country side just after Imola. I should be very near to the border. There’s a nice sun and the locals are friendly. You understand it when they start greet you since you’re on board of the car; doesn’t matter who you are, you’re part of the Giro and for them it’s enough. 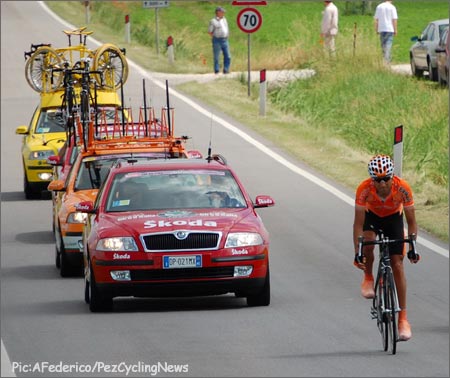 I love these race passages. The break, the bunch. This time there’s Galparsoro alone and he’s almost a quarter of hour on the bunch pushed hard by Rebellin himself. He’s working for Forster and I think is unusual to see a captain working for a teammate at more then 100 km to go. 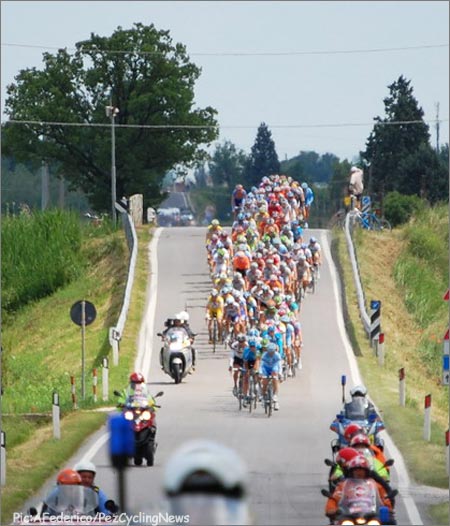 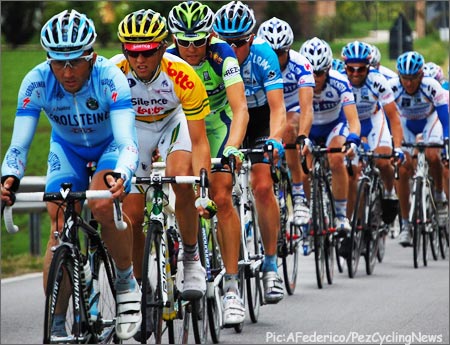 After the race passage I feel really hungry and I ask to the group of people in front of me. “We know a good restaurant where the “tagliatelle” are hand made.” Says one of the men.

“But their speciality are the frogs” add the woman. 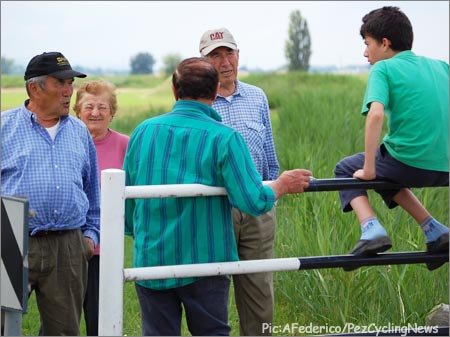 “Frogs? Is now frog season?” I’ve eaten frogs before but it was the end of the summer.
They catch them in Piemonte, near Vercelli, when they start to drain the fields to prepare the rice’s harvest. I really would like to have them again. Why not? I’ve seen the passage and I can reach the press room still in time.

Before leaving the question: “Sorry, are we in Emilia or Romagna?”
They look each other before answer “Emilia, of course!”

“God, it really works” I think while I leave. 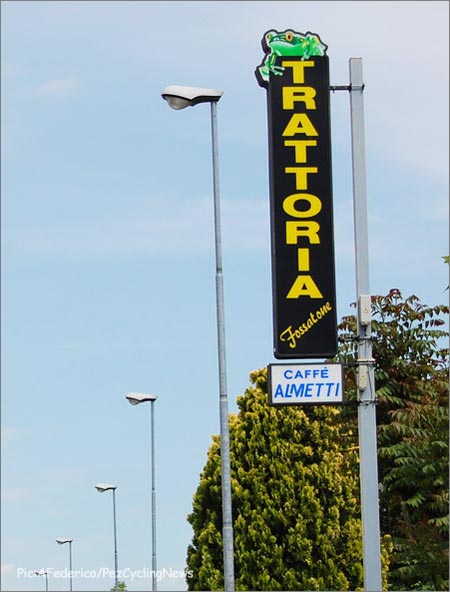 The directions of the locals are usually just for locals. So I take almost fifteen minutes to find the restaurant which was really closed to me. The indication doesn’t hide anything, I’m in the right place, the Trattoria Fossatone! When I arrive there is already late and I understand it by the darkness and the face of the owner. “If you would like to help us to wash the dishes…” his eyes are saying. 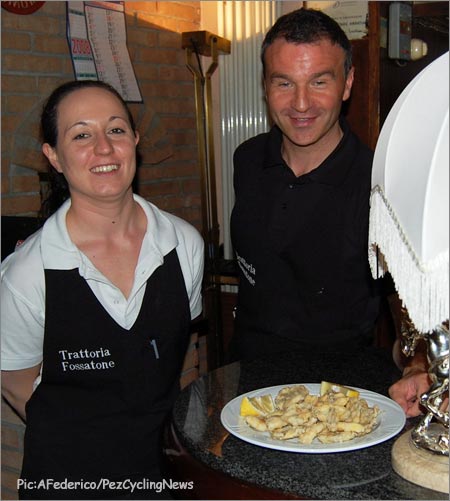 Sorry but the cook left. Then he sees my pass. He asks me about the Giro, he was on the road to see the passage. We have some speech about the border which was really in use long time ago on a narrow bridge. Then he starts talk about their specialities; they have all kind of handmade “tagliatelle” – but their speciality is the rice with frogs. The special dish is a frog combo with 4 different kinds. 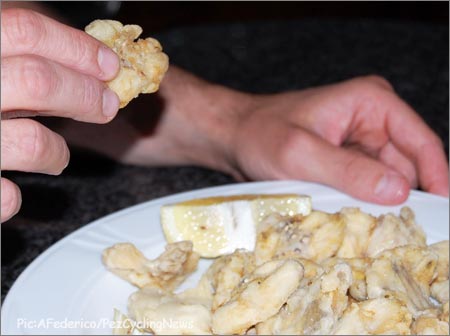 My stomach feels more and more empty during his description. Cristians understands and disappears inside the kitchen. After a while he comes with a dish full of fried frogs. “This is for you, keep it with you!” 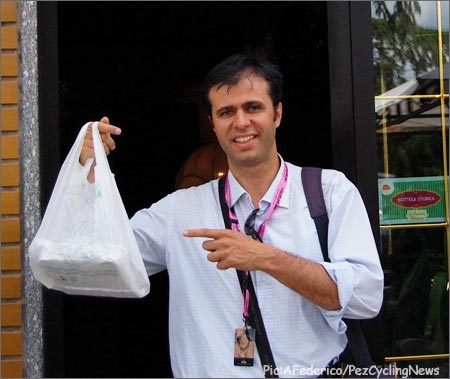 While I drive to Carpi I imagine me eating the frogs inside the press room. What will think the other journalists about me? Better stop and forget about the cycling. I will dedicate the afternoon to my portion of frogs!