Welcome back to Pirate’s roads. Thirty-five kilometres to go and I stop once I read the big advice on the right side of the road. The Giro today is north bound from the Marche region to the Romagna regions. Cesenatico, the city where Pantani was born is just few kilometres away on the sea side. 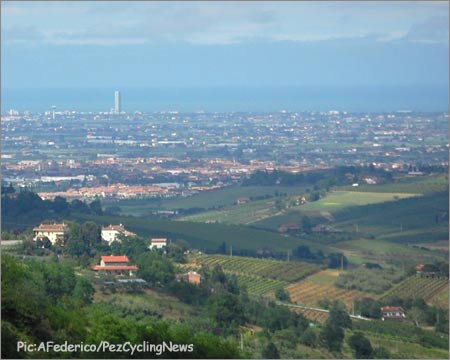 View to Rimini and the Adriatic Sea.

The stage today crosses all the hills where he rode for training, before the big events of his great seasons. Here people say that on these roads, at any turn, you can still hear the breath of Marco. But Romagna is not just Marco Pantani, it’s also a special part of Italy that really knows how to live. They work hard, but they also love dancing, singing, eating and overall, women. 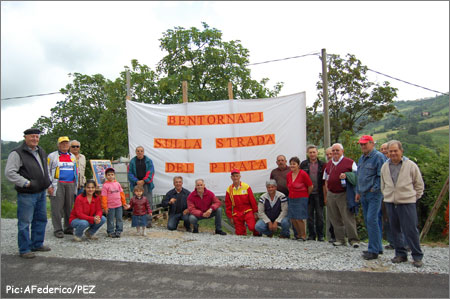 Welcome back to il Pirata’s road.

Thirty-five kilometres to Cesena and I stop the car on the right side of the road. There’s a bar and few people arounds. This is a typical village you can find on these roads, two three blocks, a bar, a mailbox and a phone inside the bar. You have to imagine life here, a few kilometres far from Rimini which is one of the most active cities of the centre of Italy; it’s like another world where everything flows quietly and the people is still able to communicate and meet. 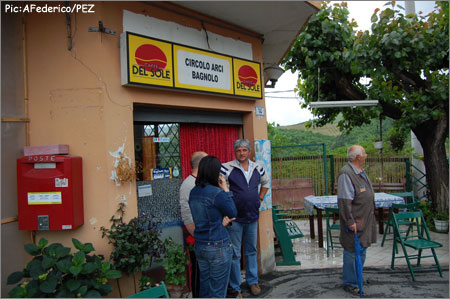 The bar in Bagnolo.

I ask about the placard: “Who’s done it?” In few minutes all the village is assembled near it for a pic. Emanuela, the owner of the bar calls everybody inside: there’s a stage to see the TV. She is very kind with me and she offers one of her espressos which is simply fantastic. As it must be. 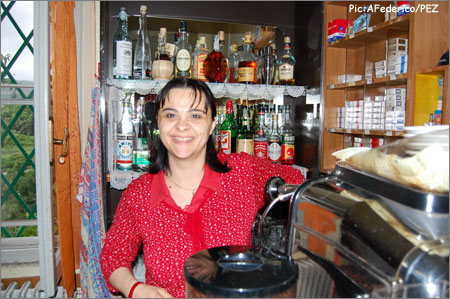 Any time I try an espresso in a new bar I test it before drinking, with the sugar. A small spoon of sugar. If it drops immediately it means it’s not what I desire. Emanuela’s espresso overcomes the test and also the palate. We sit all together commenting on the stage events. 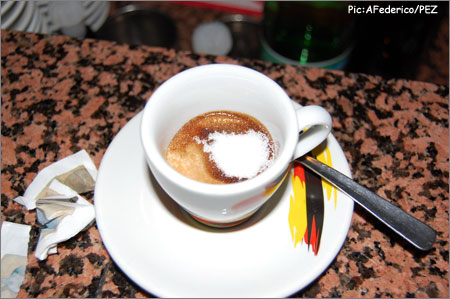 Di Luca is working hard with Spezialetti on the Carpegna climb but the talk always turns back on Marco. “He was usual to climb the Carpegna, that is a very steep climb and fitted a lot for his tests”. This is just a pretext to talk again about Pantani. Everybody here has met him during his training sections on the road. 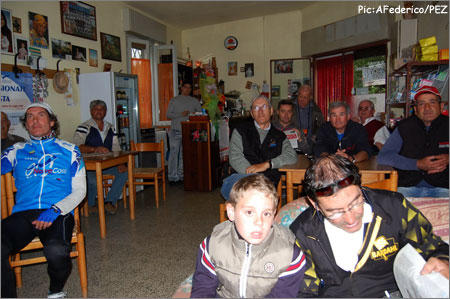 Inside the bar is very simple but very hospitable. There are two pics of Pantani, personal pics from Emanuela’s collection and a very interesting one above the television showing a step of the “Fossa Cheese” production. This is one of the big specialities of these lands. Coming from sheep’s milk this cheese in conserved inside a hole (“fossa”) for months.

Eaten with the local honey is a reason enough to make a visit for try it. I think a Pez cap would be cool on this walls and I offer one to them. 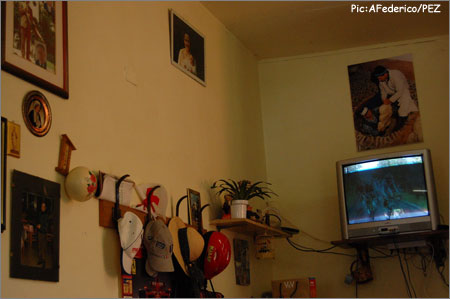 The bunch is now in the long descent and it’s raining but here the clouds are few and the cherry trees are illuminated by a welcomed sun.

Every corner here hides a treasure. It could be a bell tower of a chapel, a vineyard, or a group of people quarrelling. Quarrelling about? About anything, of course. They can talk for a day touching any argument and finding for each one a personal solution. If you’re involved in one of these forums you won’t be able to demonstrate your reasons: people here are well trained in discussion and use their sense of humour without hesitation. 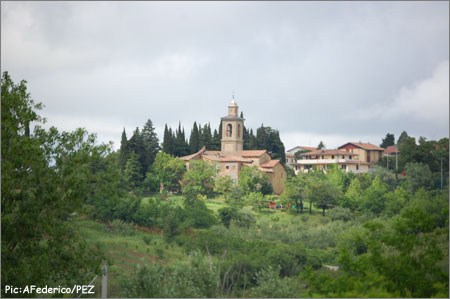 Here the countryside is very respected because the people are coming from the country and they have a full respect of tradition and work.

“What’s the name of this village?” Bagnolo di Savigliano sul Rubicone.
A very long name for a three blocks town. 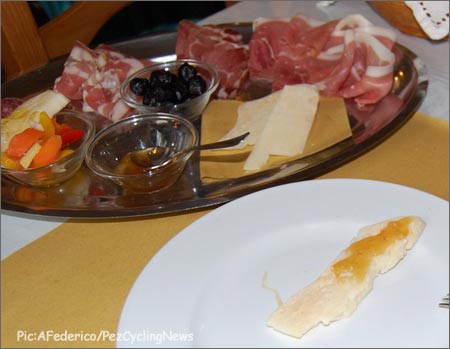 I drive for other five kilometres and I get on a small climb waiting the riders. Few metres of walking and I stop near a van where is installed a television. The riders are near to us and the noise from the valley below is the helicopter above the race. Beside me a man. White hair and a friendly smile. We look each other. I always knew I would meet him again sometimes in my life. 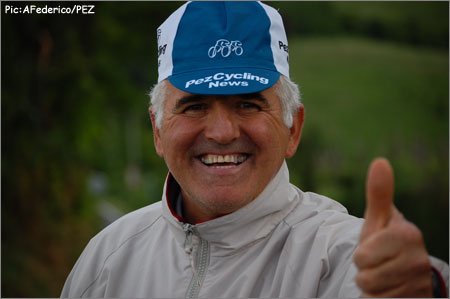 An old friend gets Pez’d.

A strong embrace, a friendly greeting and we jump together in the past. The first time I met him was the 1998, in Plateau de Beille, on the French Pyrenees chasing the Tour de France. He was there with other guys chasing that Tour as a Pantani supporter. I was chasing the Tour also with my motorbike and since that day they started call me “the biker of the Pyrenees”. Any time we met it was a festa and they always offered to me their supporter club card as special friend. It was very easy find them those years because they used to paint the road with the Pirate name with a very long P.

A Pez cap also for him with the promise to meet again on Pampeago.

Adriano is still sick of cycling also if he knows that the good times won’t be back again.
“The others are lost” he says, “they’re not coming to the races anymore”. He could spend hours telling about episodes linked to the Pantani story. 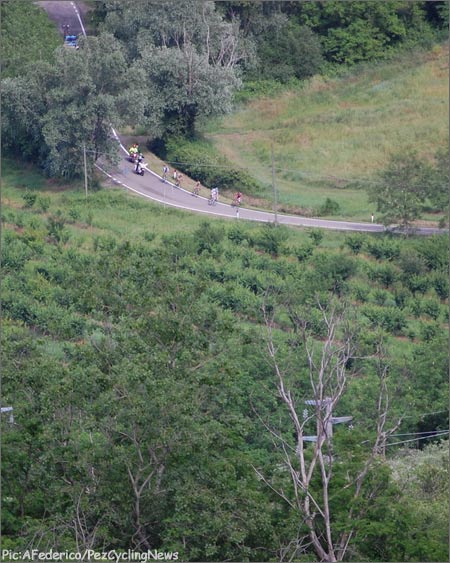 The race is coming. I’ve been in the past too long and there’s a Giro to tell. But these are really the Pirate’s roads and there’s no way to elude the reality because here everything is a pretext to talk about him and the silence is not working because here, at any turns, you really feel him climbing hard and breathing fast.