“Savol is doing a trojan’s work, gap is now 1-32 to gruppo Bert – wait – ! Di Luca gone alone now – Savol blown -.” We’re at the top of the Passo della Presolana and Richard is watching the action on Cycling.TV, and emailing us from PEZ HQ to my the Black Berry.

***NOTE: Be sure to catch tomorrow’s decisive stage on CYCLING.TV

The race is nearly upon us, we need some excitement, because to tell you the truth, there hasn’t been a lot of tension up here, the crowd is sparse and polite – we miss those demented Bruzz fans! 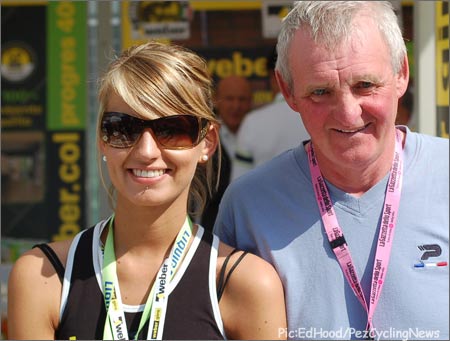 After days perfecting his posing technique with the corredori, Dave was ready to step up to the big leagues – here’s one that’s make his mantle for sure.

The morning saw us at the Legnano start, getting opinions on the next three days, the sun was out, everybody looked great, yesterday’s winner, Jens Voigt pedaled past smiling and we even managed to get Dave to pose with a pretty girl! 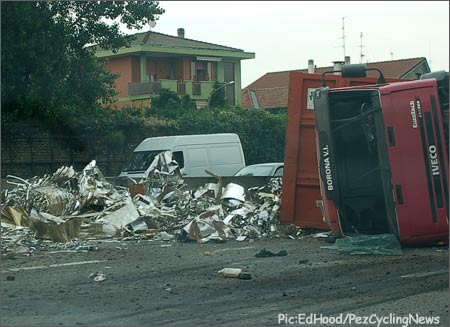 Fast forward to 15.00; we dodged the truck wreck on the autostrada and the world’s longest traffic jam. But we can’t dodge Viktor; he’s just been on the cell phone to rant at us – the race, the riders, our pictures, nothing is spared and we’ve got nothing right… 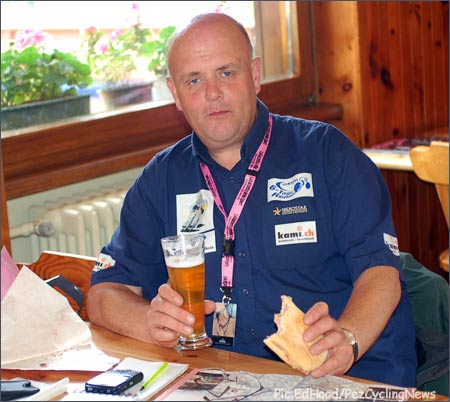 Never mind, we’ve got a panini and a beer, we’re out of the rain and the Giro is only two hours away.
It’s a forced march to the top, from the car park, though. 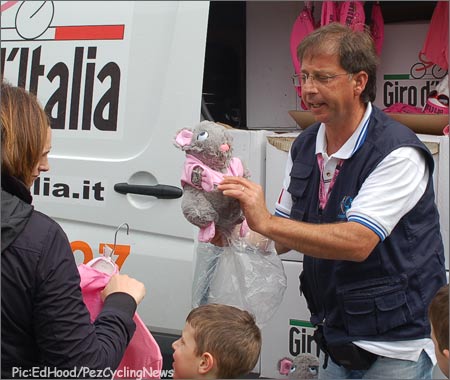 The GPM at the Passo della Presolana and the crowd is sparse at 15.30; the “solo tre euro” Giro T-shirt vans are so desperate for sales that they are reversing at high speed, back down the mountain to sell three euro bandanas.

“Falco,” Savoldelli’s nickname, “10 years in the Giro,” says the banner, maybe it”s one too many? 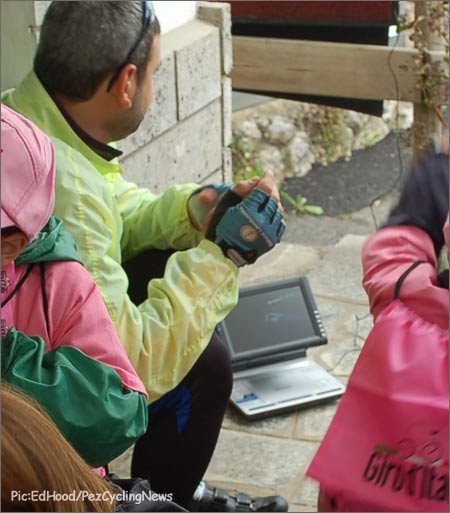 There’s a TV in one of the bars, another outside one of the cafйs, one guy has a tiny portable on the pavement, but the coolest guy has a dashboard screen in his VW 4 x 4 – we’re jealous as we wander past, in the rain, it’s 16.00 by now. 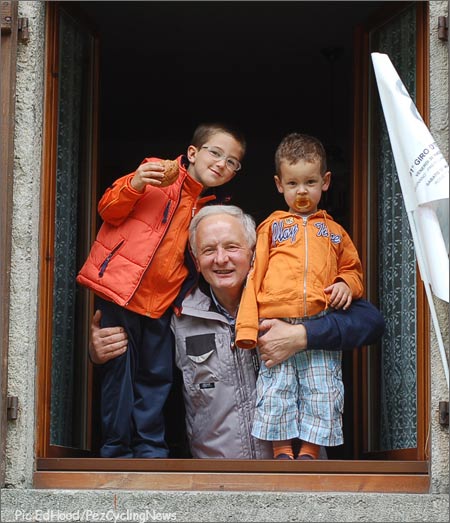 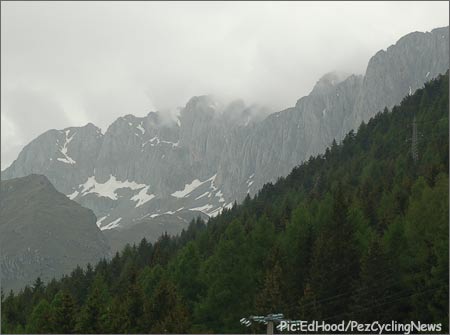 Wow! This is Savol country – he’s a Bergamischi, that’ll get these guys excited! It’s not to be; Richard’s next update comes in, and Savol has gone – but he was Di Luca’s booster rocket, so maybe not a bad tenth Giro after all? 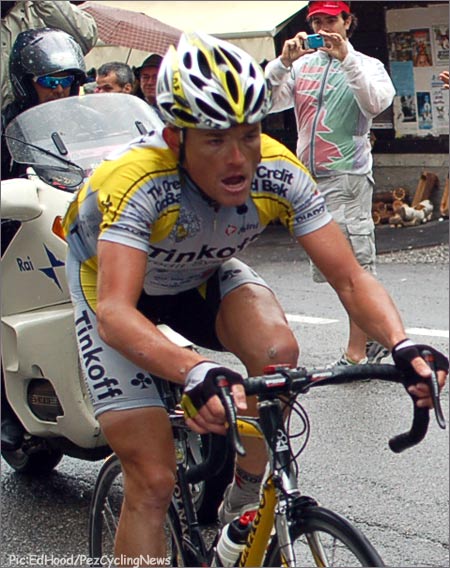 The motorbikes and cars stream past, the lights flash, the sirens blare and suddenly there’s the leader, Vasil Kiryienka. He’s on top of it, it’s hurting but he’s in charge of the pain.

If he wins, that’s two for Tinkoff – Oleg will be in heaven! 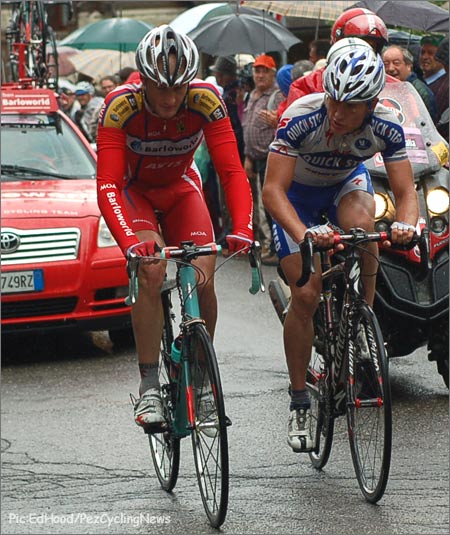 He has a good gap, 1-12 and there’s Steve Cummings, we took his picture just a few hours ago in Legnano, he looks a bit more stressed now though. QuickStep hardman, Alexander Efimkin is with him, they’ll struggle to get Kiryenko back, but it’s good publicity for Cummings and his Barloworld squad – they need it!

A CSC rides past, then a High Road, it’s hard to get numbers with the rain capes, the motorbikes and umbrellas.

All of this is only the primo piatto, though; we’re waiting on the carnй – the meat course. 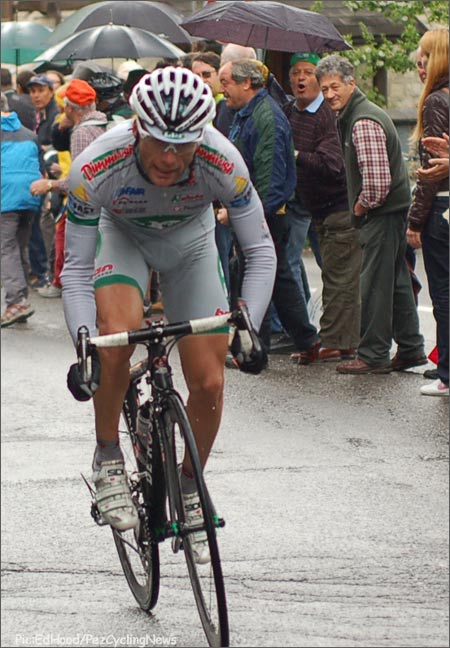 And he here it comes – Di Luca, flying, nobody before or after him breasted the summit quicker today. Yesterday we saw him at the start village, he was quiet and introspective and looked a little ‘down’ – not today; today he’s “The Killer!”

He sprints over the top and is gone, in less time than it takes to write. 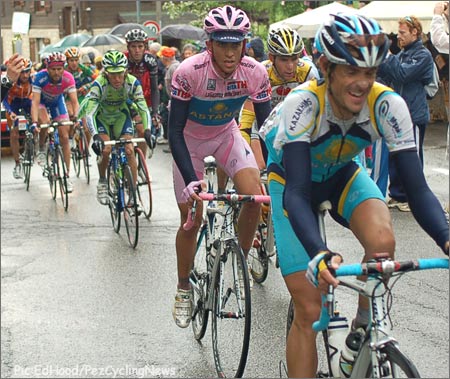 Two long minutes drag past before Kloden, teeth bared but looking as cool as ever, drags Bert past – the rest of the capi are there, Pello, Bruz, Sella, Menchov plus more but they’re gone before we can ID them all.

Di Luca is surely on an “exploit!” 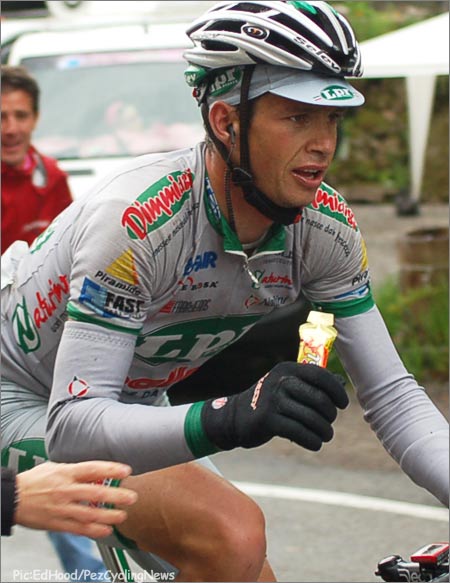 There’s Savo, job done, he grabs for a gel – the work he’s done shows on his face.

Almost as soon as Savo has gone, the fan’s start their charge down the hill – to us it’s disrespectful and dangerous, but it’s the way it is at the Giro. 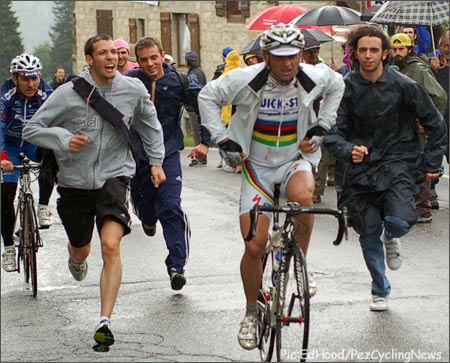 Champion of the world, Paolo Bettini, 19 minutes down, but his fans don’t care, they sprint up the road beside him, screaming encouragement. Charly Wegelius, 22 minutes down, he was relaxed in Legnano but his thin face shows the strain now. 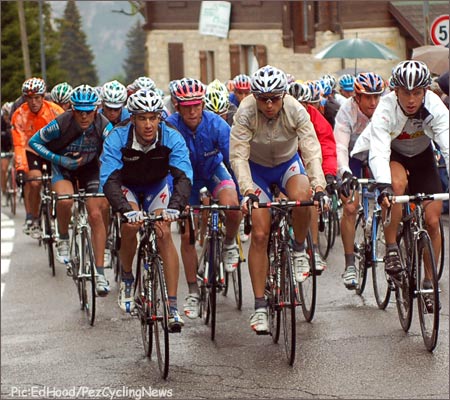 Then the autobus, at 30 minutes; drained, empty faces, pain – by the finish they’ll have been on the road seven-and-a-quarter hours.
A Tinkoff clings to the back of the bunch, there’s desperation in his eyes. 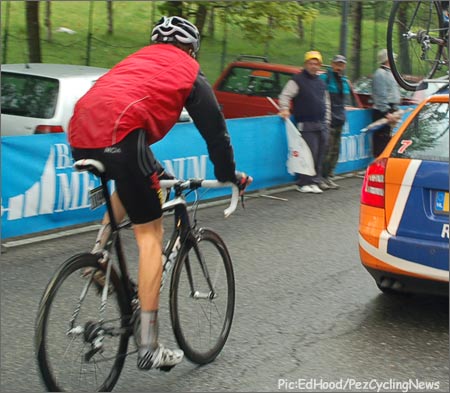 Stone last, among the cars is Bradley Wiggins, but the finishing sheet would tell us that he was safely in the autobus at the death. 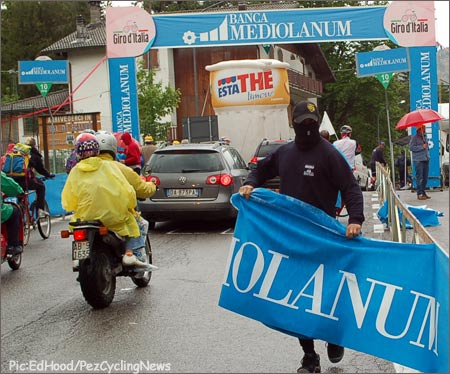 Up on Monte Pora, Di Luca is rampant, only Efimkin will beat him to the top and by the end he’ll be just 25 seconds behind the pink jersey – did I say the Giro started in earnest last Saturday?
Forget that, it started today!