Giro di Pez: To The Rooftop of Peschici!

It’s good to be back online from the press room here at the stage 6 finish in Peschici. After yesterday’s big journey clear across the country, I’m recharged and ready to join the fray, and once again today did not disappoint – starting with dinner last night, a ride along the coast this morning, and an awesome view point for today’s finish…

Back In Action
It was 6 hours of travel to cover the 500km, not including the 30 minutes it took to get from the hotel to the autostrada. And in spite of my best efforts, I admit the F-Bomb Quotient was well into the double digits before I’d even cleared Cosenza. But the after that the day ran pretty smoothly, with minimal road work delays, and a shortcut that actually panned out. 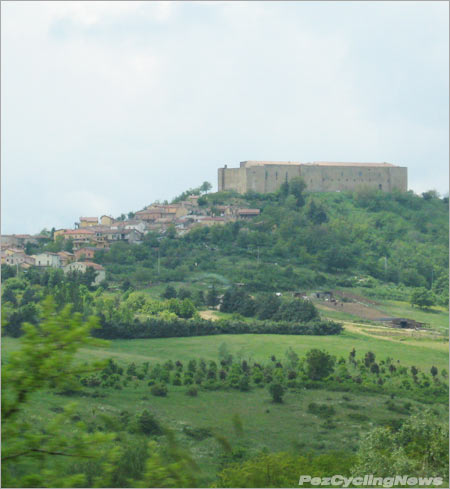 It was still a late arrival at the hotel last night – but in time to see the stage end and check emails. Gotta say a huge thanks to everyone who’s been reading along and taken time to send in messages – it’s great to know people actually read my stuff – and it really does inspire me to produce the best stories I can. 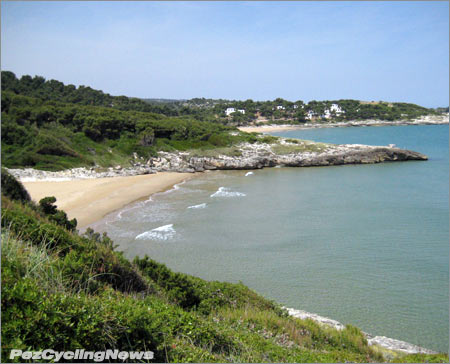 After crossing the hilly central part of the country, and then traversing a vast plain, I’ve arrived on the east coast of Italy – on the Gargano Peninsula. The finish town of Peschici was also used a couple years back, and this part of Italy really is gorgeous – the sparkling blue Adriatic caresses the calf of the Italian leg with endless sandy coves and white sand beaches… The ‘work’ part of this gig is gonna be a tough sell to Mrs. Pez… 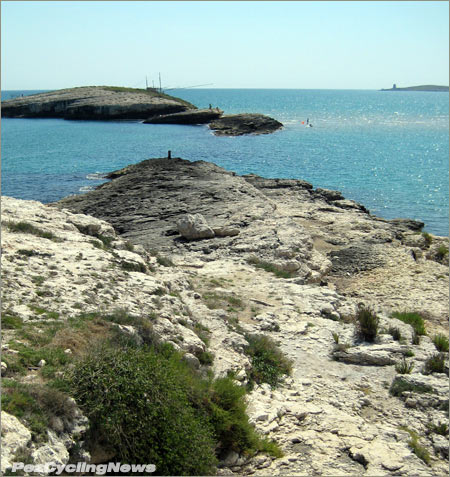 I’m staying up the road about 15km in the tiny village of Rodi Garganico – and was the only guest in my hotel last night… it was a tad weird arriving in the restaurant and seeing just one table set for breakfast. But the main business here is now tourism, and the season doesn’t kick in till June. 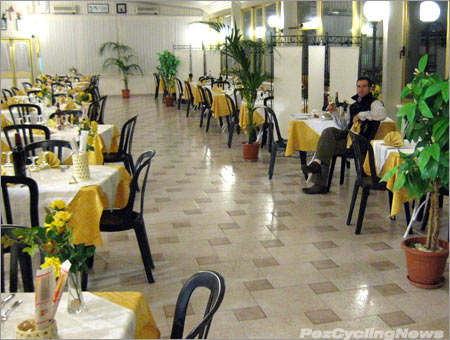 I ventured out for dinner, and again was the only guest. Finally at 10PM another table of customers showed up, but I was happy to chat with the owner and his staff. The place is CiccioaMare.it and is worth a visit. ‘Ciccio’ is short for Francesco – the owner, and he offered a warm welcome, but no campari – so a negroni was out of the question. 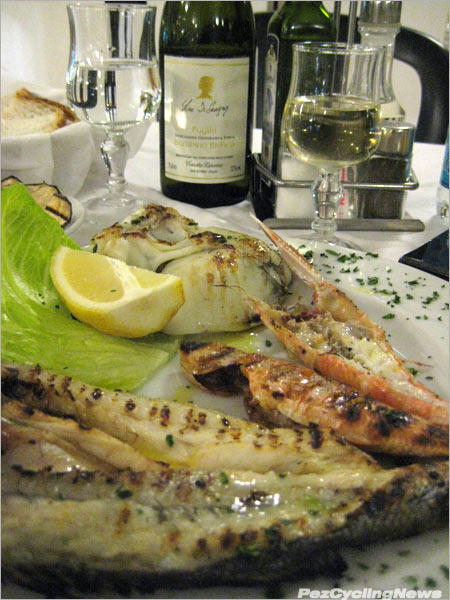 Having already eaten a big pasta feed on the drive over, I opted for the mixed seafood salad to start, followed by the mixed seafood grill – being just meters from the sea, I’d be remiss in not sticking with the region’s specialties. I can’t tell you exactly what types of fish I ate, but they were all great – the calamari was especially tender. 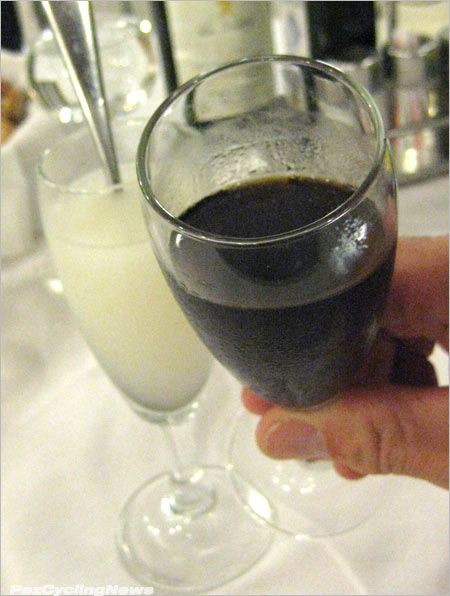 • As usual I’m up for a little something for after dinner- and the beauty here is that each region has its own special apertivos, digestivos, and other alcoholic concoctions. The black stuff is called “limocello nero” – or something. I know limocello is a refreshing treat after a meal or even between courses, but I’d never seen the black stuff – so naturally I was game for a glass. Turns out it’s made with black olives – yup – some kind of mix of limocello and black olives. The kicker is that Franco’s 85 year old mother makes it in her house – and apparently this is the only place in Italy you can get a glass. Be sure you try some next time you’re here… it’s goooooood.

Arrivo Minus 15km
I’m tapping away on this story, looking at the tv screen, but not sure where the race is – It’s only 4PM so I figure I still have lots of time. Then Stephen Farrand of Cycle Sport tells me they’re only 15 km away! Yikes – ! 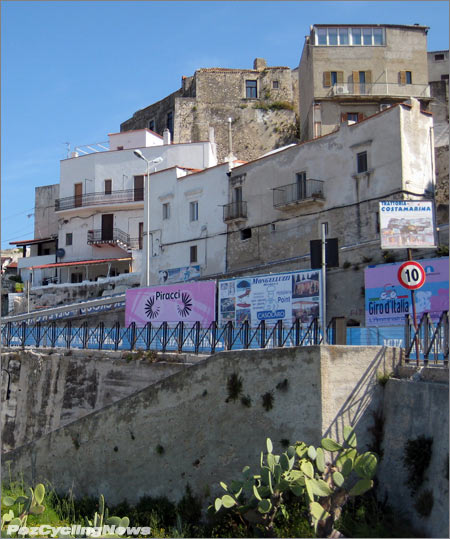 Looking up to just past the 1km kite – little did I know when I snapped this pic, that I’d be watching the race from one of those roof tops.

I’m outta here like a scalded hoola-hoop, trying to remember where the spot I’d seen earlier on the climb actually is. The town here is tiny, but still has a zillion streets – they’re just crammed into a very small space. There’s no way I’ll be allowed on the corsa now – the cars are already arriving. All I can do is rely on my sense of direction, and pray the streets open up the way I hope they will. 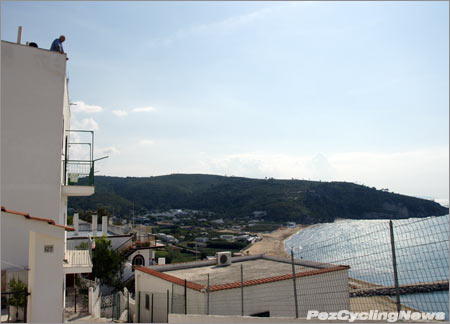 I spy my target… that guy’s got the perfect spot and I want to be there.

I run past a piazza, and duck into the side streets – the village slope starts to fall away and I’m bounding down big cobbled steps placed here hundreds of years ago. I round a corner and see the water – I’m close – a few steps more and I’ve totally fluked out and popped out exactly where I want to be. I’d scoped this primo spot this morning – just after the 1km kite, between two switchbacks. 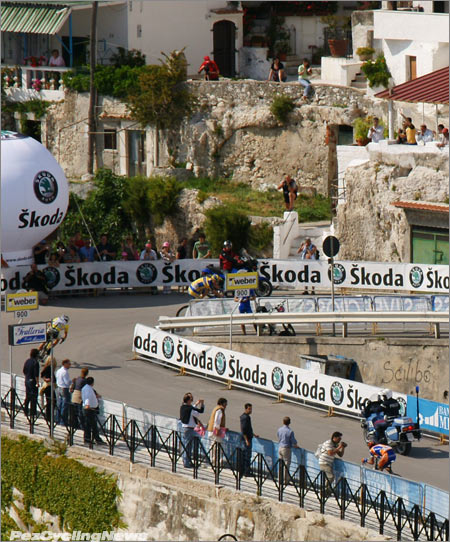 Across the street I see a lone man standing on a roof top – it’s the perfect position. I call out to him – “Signor – Signor!” I ask him if I can join him – and he yells back – “Siiii!” and beckons me with a wave. 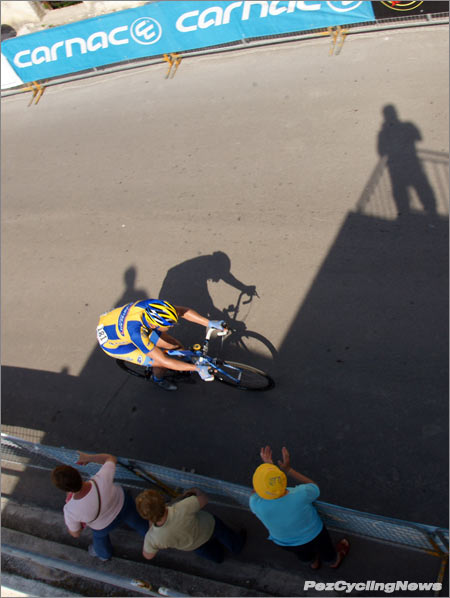 Me and my shadow shoot Maggy in 2nd place.

But my way across the street is blocked by the barriers, so I ask the local policeman if it’s okay to cross. He talks for a while about something I don’t understand, but agrees to hold my camera while I jump the barrier. Things are going well – no F-Bombs now… 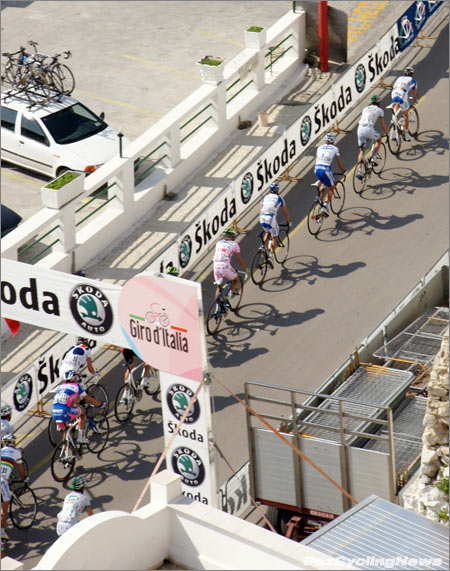 The gc boys sail under the 1km kite.

We hear the helicopters approach but somehow miss the procession of lead cars and motos. His name is Carmine, he’s in his 60’s I reckon and looks like he’s lived a hard life (by my standards anyway). His teeth are yellowed, and I guess he’s not seen a dentist in years…. 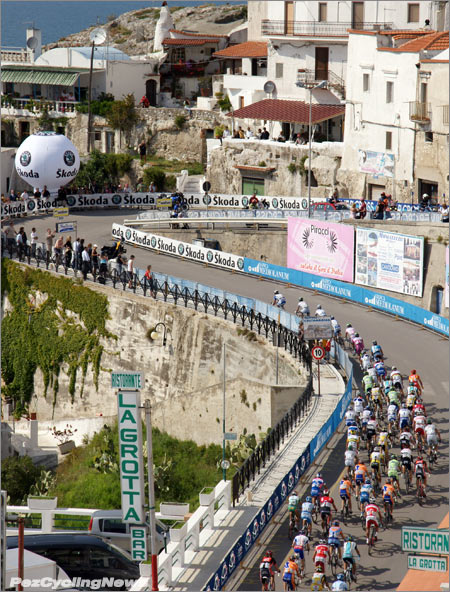 I ask what work he does- and he tells me he built this house with his own hands – his a bricklayer (for lack of a better term in English).

Obviously he’s a nice guy – and as we’re chatting away – the lead break suddenly appears- ! Doh! 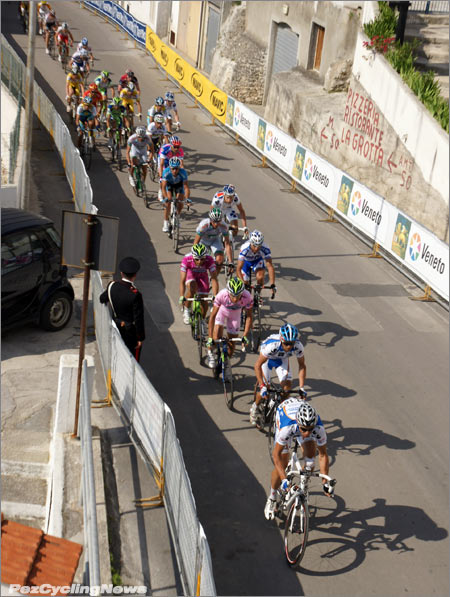 I start snapping pics like crazy – zooming in and out, my pulse racing. I see the break round the far turn, then I run across the deck to shoot the leaders coming by the other side of the house as they continue past the 700km to go mark.

In about the time it took to read those last couple paragraphs… they’re gone, and all is quiet. Five minutes pass, then another five – and finally we hear the helicopters again. 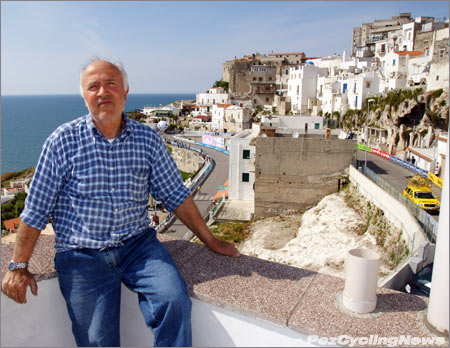 The man of the hour – Carmine! Thanks for the hook up!

Now I’m paying attention and have my shots planned out – I start snapping and hope for the best. They go by so fast there’s no way I can sort out who’s there… I see a pink jersey, some Quicksteps… it really is a blur…

Some 200 pics later, the race has gone by and I’m heading back to the press room to see what I got.

And as fast as that whole segment flew by, my adrenaline is still running, and I know it’s one of those Giro experiences I’ll remember for a long, long time. It’s been a couple more days of unforgettable expectations…

Tomorrow it’s off to the start in Vasto, then to the first big mountain finish of the race in Pescocostanzo. It’s gonna be another great day… and I can’t wait to get started. But first I need a negroni…