Arabba, kilometre zero and the Passa Pordoi starts NOW. Welcome to the Queen Stage of the 2008 Giro, “only” 153 kilometres but five passes – the Pordoi, San Pellegrino, Giau, Falzarego and the Marmolada. You maybe won’t win the Giro today, but you could sure lose it, and we drove 148 of those kms ahead of the race for a closer look…

Stage 15 went straight up the Passo Pordoi from the start in Arabba.

What can we say about it, Dave? “It’s steep!” There’s been a lot of resurfacing done and the tar is smooth enough but the sets of hairpins are tight, linked by long straights. High on the right, the rock towers look down on the cleft in the mountain side – they’ve seen it all before. 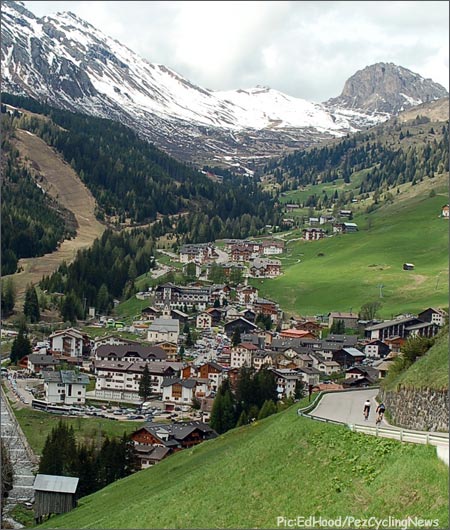 Arabba also makes a great base for cycling in these parts.

There’s a lot of snow lying as Dave coaxes the little Matiz up, up, up. Arabba looks like a model village, way down in the valley. We reckon a break will go early, a tactical one, it’ll be a big chess game today.

The descent starts immediately, under the banner and down, down, down.
Hairpin follows hairpin; this is our second time down here today – we drove all the way up from our hotel at Pozza di Fassa, expecting to simply drop down to Arabba.

“No, no, you cannot go down, only team cars!” said the policeman; the detour only involved us climbing three passes! We gave the friendly officer a wave as we passed on the way up from Arabba, he scowled, obviously disappointed that he hadn’t wrecked our day. 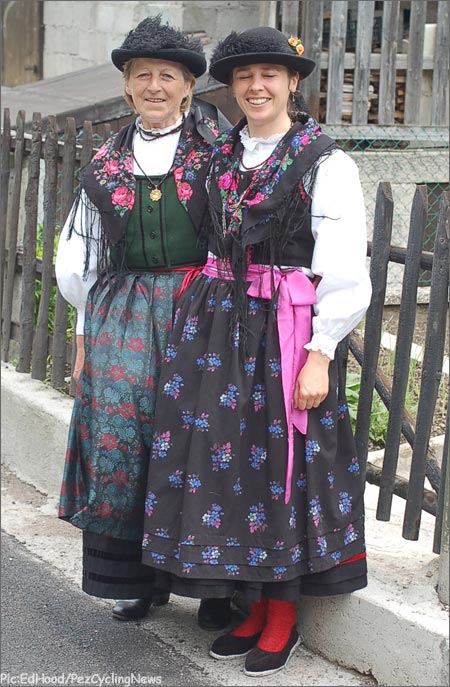 The descent needs max concentration, bends open, look safe but tighten at the last moment. It’s more dangerous below the tree line as the line of sight is obscured most of the time.

Canazei, the valley floor and the sunshine is making everything look like a scene from The Sound of Music. This part of Italy was actually Austria until the First World War and the influences are still strong. 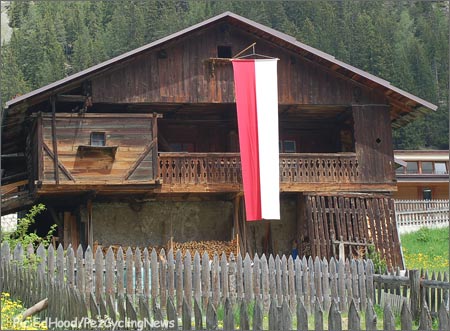 The valley road is gently dropping, well surfaced and fast. The villages are cute, but quiet, there aren’t a lot of fans out – they’re all in the montagne. 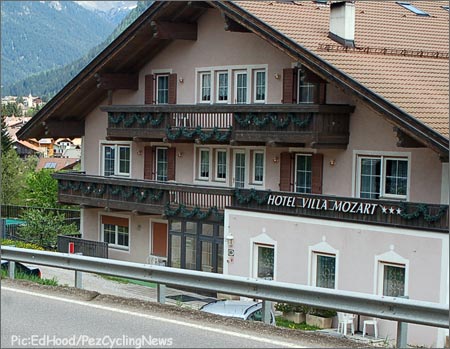 There’s our hotel – the Villa Mozart, two nights in the same place – great!

The San Pellegrino kicks from the start in Moena, no messing, a left and it’s inner chainring stuff, and there’s 11 K to the summit. Well surfaced, open and not as steep as the Pordoi – but that doesn’t mean it’s easy. The steams rush white with melting spring snow as we drag up through the pines. At last! Crazy fans, they give us a demented bell ringing demonstration, that’s more like it. 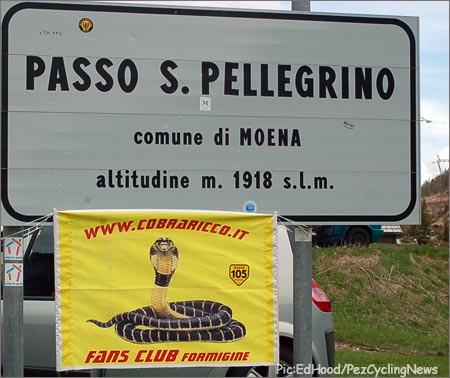 As the top nears it eases, a cobra stares at us from the San Pellegrino summit sign – Ricco today? Maybe. ‘Comfort break’ time and there’s those Bruseghin fans, complete with donkey ears. 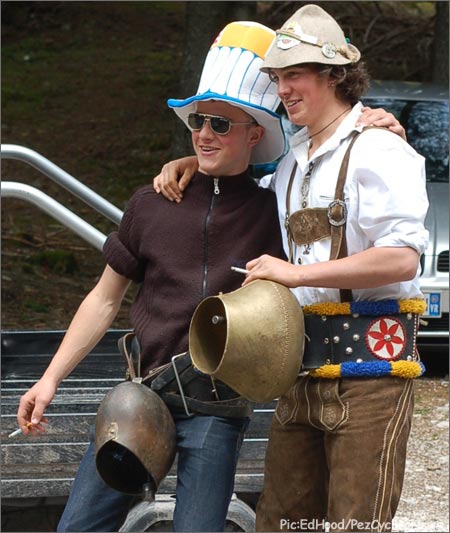 Back into the daylight and it’s straight onto the San Tomaso Agordini climb, it’s not one of the day’s “big five” but it’s steep and getting windy out there.

The top; and it’s straight back down the roller coaster, high retaining walls on the left, crash barriers on the right, this one is dicey.

The climb up to the Passo Giau starts soon after, there’s little flat road, just tarmac chasing the horizon, which in these parts is way up high.

There’s the feed zone, the helpers wait patiently for their men – there are a lot less mouths to feed after yesterday; Rebellin, Forster, McEwen and most of Cofidis have all gone home.

The Giau is the third of the day’s ‘biggies’ – and it’s tough, steep, hairpins but the surface is reasonable. There are more fans here, most of them drunk.

As we cross the snow line, the gradient steepens and the last 500 metres are brutal. At the top, the views are wonderful, no matter which way you look, there is savage beauty. It’s cold up here, probably around freezing with the wind chill.

On the descent cold melt water from the snow runs across the tar, already aching calves and thighs will get the icy spray. There’s the 50 K sign and “only” another two passes to go; but first there’s this dangerous, technical drop – Savoldelli will love this!

Pocol, the bottom and the start of the Falzarego. It’s not too brutal, wide, open and with long straights. The surface isn’t great though as the rock formations over to the right become ever more impressive. 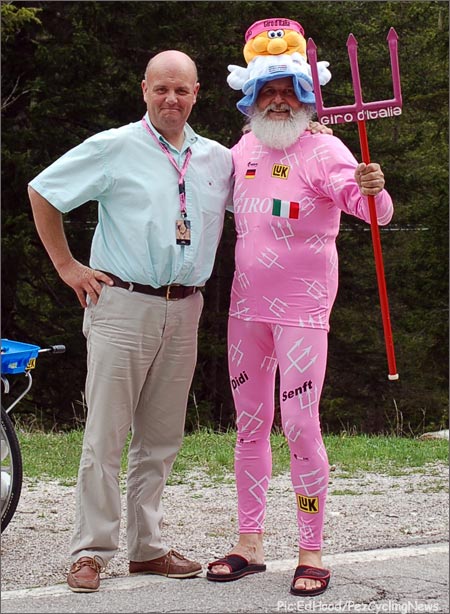 And there’s the Devil – he has a rather fetching new pink outfit, I’m under strict instructions from Bossman Pez to get my picture with him, here goes . . . .

Up and up it drags with no respite as a light rain begins to fall. There’s not a huge crowd at the top – it’s too cold! 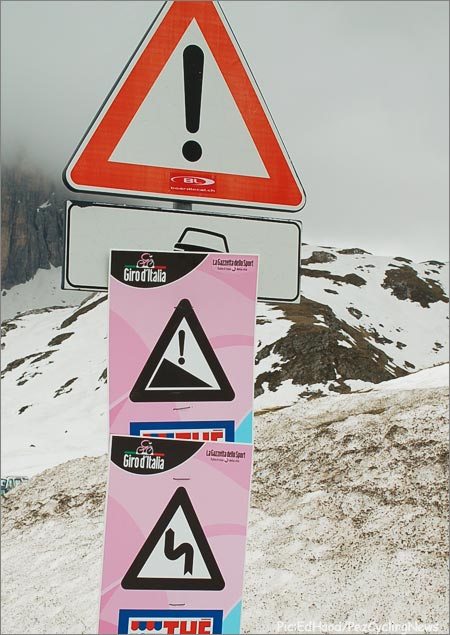 The last descent of the day is technical – 17 hairpins and getting more dangerous by the minute as the skies open. Down, down, down through the trees around saturated hairpins; rapid straights; across streams swollen by the sudden rain – even off the bottom of the col the road continues to drop.

Finally we bottom out and the Marmolada rears, no warning, no hesitation, this is it, the final acts of the Queen Stage will be played out here. 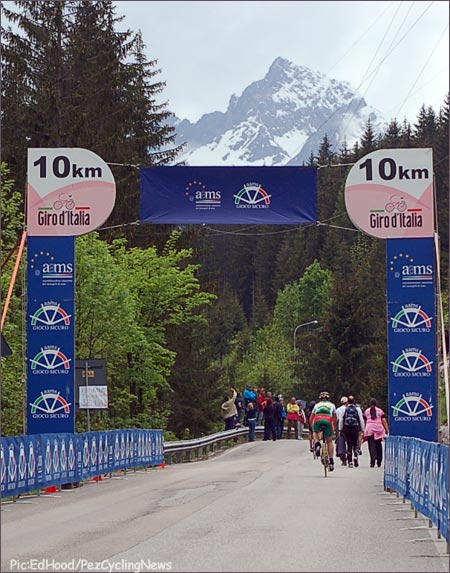 There’s the 10 K banner and we’re on one of the most famous roads in cycling. For the first two kilometres it’s not too severe.

At the eight kilometre mark we have to leave the race route, the riders will go through roads too narrow for race traffic whilst we have to take the wider option. Even the VIP cars have to do this and the cops are getting tired of our questions, so we just have to go. 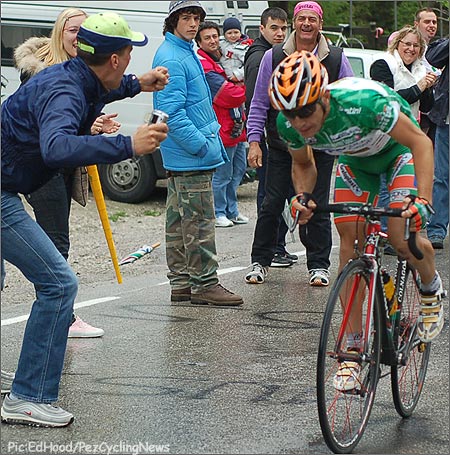 Five K we’re back on race route – what? “Terminus!” We can’t go any further? “No cars!” We park and start the march, but there’s the helicopter, OK – it’s race report mode now.

It’s that man Sella again, on his own, he assaults his bike rather than caresses it; fighting, swerving, in the saddle, out the saddle – as we say in Scotland; “he’s no’ bonnie!” but the job gets done. Like Dave said; “he’s the climber of the moment!”

The remnants of the day’s adventures struggled past, but it was the ‘big guns’ we were waiting for; Contador, Ricco, Simoni, Di Luca, Bruz (Bruseghin – we’re fans now!) and Kloden. 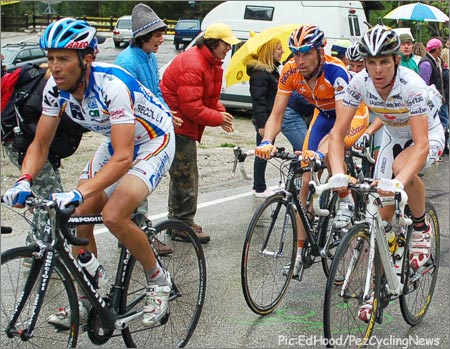 Those first four were together, with Bruz just a little off the pace, but it’s over for Kloden – five minutes behind the group of the ‘capo.’ 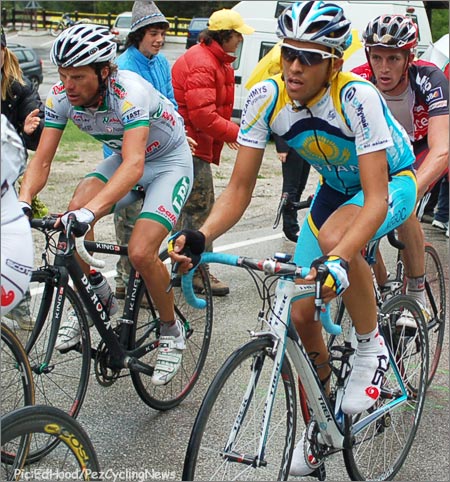 As we began the long wait for the autobus we took stock of our surroundings – there were Bruz fans everywhere, displaying their donkey sweat shirts and listening carefully to the radio to chart their man’s progress.

It wasn’t the best day; he dropped from third to fourth, despite pink jersey Bosisio collapsing and dropping out of the top ten. Bososio looked resigned when he arrived – at 14 minutes, whilst Millar looked tired and Wiggins exhausted, both at 35 minutes.

Exhausted too, were some of the fans, dragging their casualties off the hill in a cloud of red wine fumes that would choke a horse. 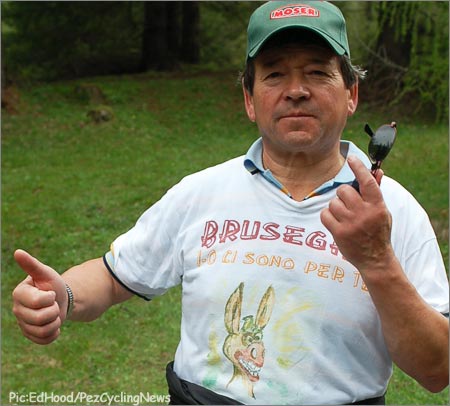 As the ‘autobus’ rode past a ‘Bruz’ fan (who else), obviously drunk, dressed as a padrй but topped of with Oakleys and a loud hailer was ‘blessing’ everyone as they rode past, like Dave said; “I’m no’ sure that boy is a real priest!” 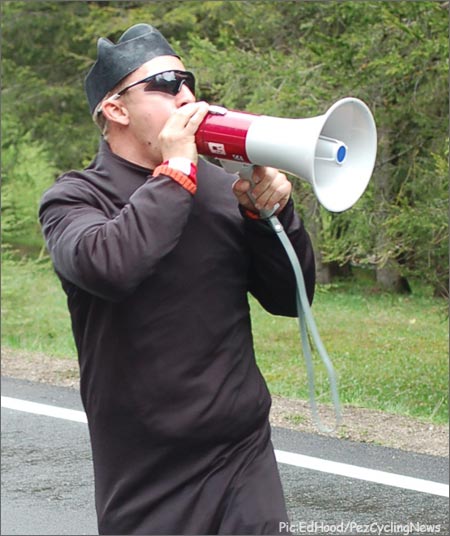