It’s the first stage of the first Grand Tour of the year and it’s a team time trial to kick off in the Sicilian town of Palermo. The addition of Astana has taken the focus off of a lot of the other quality squads – but there’s no question that all of these teams want a piece of that beautiful first Maglia Rosa of the 2008 Giro.

Last year Dani Di Luca’s Liquigas team took the honors with a little bit of Italian confrontation as his younger team mate, Enrico Gasparotto, took the pink from under the “Killer’s” nose! There has been a lot of water under the bridge since then and Di Luca now rides for the more modest LPR team, so that problem shouldn’t arise this year. Palermo here we go! 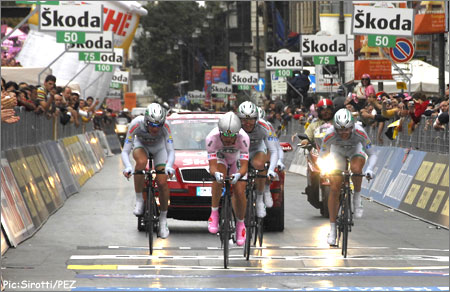 The 23.6 kilometer stage is mainly flat, with a slight rise on the way out and the same on the way back, the trickiest part for the teams will be at the turn in the seaside resort of Mondello, a sharp right hand hair pin after 11.4 kilometers, then when the riders are starting to tire there are a combination of lefts and rights with 4.5 kilometers to the line, fast on the way out, technical on the way back.

Tinkoff, Milram and Caisse d’Epargne
Sadly there has been some rain and it’s reported that there maybe more to come, bad news for that return leg; the weather hasn’t put off a fairly good crowd on most of the circuit. Tinkoff where one of the early starters and early leader, working well and taking the top end hair pin without any problem. Mean while Cofidis, further back seemed to be changing riders on the front more regularly, but where 32 seconds slower than leaders, Tinkoff, at the 10.5 kilometer mark. As first team off, Milram, come in with a time of 27 minutes and 17 seconds the road looked decidedly slippery as a thin drizzle makes things a bit dodgy, Caissse d’Espargne kick out of the start house, disappointingly held up by middle aged men, one lesson the Giro could learn from La Vuelta is that girl starters are more pleasing on the eye. 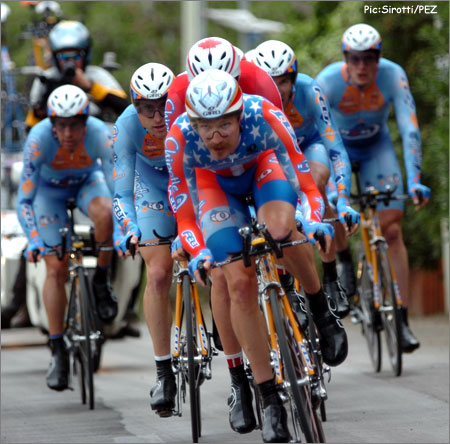 Slipstream-Chipotle
Tinkoff come in with a faster time of 27.05, as we look at Slipstream-Chipotle who have three national TT champs in their line up, but the skin suits of the other riders is mostly blue and its impossible to read the sponsors names, that aside they have lost a rider after only 5 kilometers. Quick-Step and Astana are out on the road as Saunier Duval come in with only six riders and a slower time of 27.34 to put them above Cofidis (27.35) in third place with only four teams home. 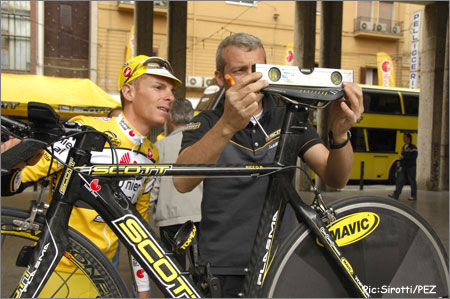 Riccardo Ricco’s saddle might have been level, but Saunier Duval’s 15th place finish over 1 minute back wasn’t anything to write home about.

Diquigiovanni-Androni, the team of Gilberto Simoni returns a good time (27.23) as Danny Pate gets dropped by a very slick and fast Slipstream who look to be pushing Astana hard for the win, we have not seen the Team Time Trial specialists CSC yet and they will be the team to beat. Watching Alberto Contador (Astana) sat at the back of his team mates he looks fit and relaxed, but with a slightly upright position on his Trek, big surprise is David Millar not managing to hold onto his team as BIG Magnus Backstedt rips it up to the finish for the best time so far of 26 minutes and 32 seconds to take the lead, Magnus would like nothing more than to be in Pink as he hasn’t had much luck since his Paris-Roubaix win, lots of broken bones! It looked like Christian Vande Velde was first across the line, so he could be following in Andy Hampsten’s footsteps as being the next American to wear the Pink Jersey. 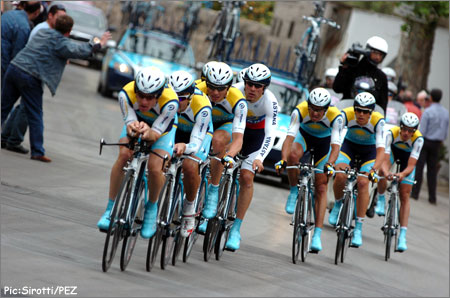 Astana
Astana still have nine riders as they come up to the finish, they are fast (27.01) but not fast enough to knock Slipstream of the top step. RAI TV asks David Millar about his ride, he says “the most important thing was for someone in the team to take the jersey, which was the aim of the day”. The specialist team of CSC, is on the route and with riders of the caliber of McGee, O’Grady, Voigt and McCartney they are going to be tough to beat as at the half way point they are 5 seconds faster than Slipstream. 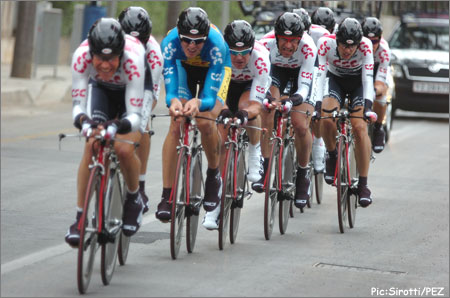 Euskaltel-Euskadi, more known for their climbing, return a time of 27.49, over a minute slower than Slipstream, but then this is no surprises from the lightweight Basques, the Quick-Step team of Paolo Bettini do well to finish in 27.14, CSF Navigare (27.47) and Rabobank (27.35) not so well.

Lampre, Barloworld and CSC
Lampre without the “Little Prince” looked decidedly unimpressive, their best rider is to be Bruseghin, but it looks like the Lampre B team that finishes in 27.17, out on the road the Barloworld team has the Italian commentators going wild as their two British riders, Geraint Thomas and Steve Cummings, are dragging the team at a high speed.

As CSC hit the last corner it would look as they have lost time on Slipstream and will need to pull out something special to take the lead, they just didn’t have it today and come in 6 seconds adrift of the American team. Barloworld were on a very good day as they went into third place at only 13 seconds down.

High Road, Franзaise des Jeux and Ag2r
High Road have multi-World track champs, Bradley Wiggins and Mark Cavendish along with ex Pro Tour leader, Andre Griepel in their line up, so should do a ride and they do well to finish only 7 seconds behind the leaders, Slipstream. 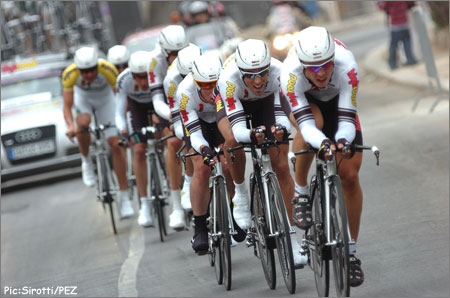 The news for the two French teams, FdJ and Ag2r is not so good, as even Euskaltel beat FdJ and Ag2r are at the same time as Rabobank and Cofidis at 27.35. High Road are cutting it close, but just lose out and finish in the same time as CSC, 26.38 and it looks like Slipstream will take the first Pink jersey. 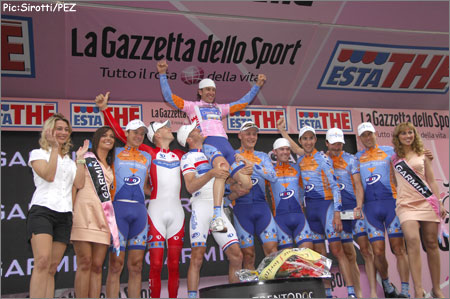 Silence-Lotto, Liquigas, Gerolsteiner and LPR
Liquigas were out to show that they do not miss Di Luca and pushed their way in between High Road and Barloworld at 26.40, their team leader, Danieli Bennati seemed happy enough with their position at 8 seconds behind Slipstream, Gerolsteiner are out of the first 10 with an average time of 27.26, not a great start for Davide Rebellin, but it could have been worse! Robbie McEwan doesn’t seem to be too concerned as he crosses the line in a time of 27.50, not the slowest, but second slowest beating Fraзaise des Jeux. LPR the team of Di Luca look nice on their De Rosa’s and the “Pinkiller” seemed to be doing more than his share to try to keep the jersey, but it wasn’t to be as they finished in 6th place, 1 second faster than Astana in 27 minutes dead. 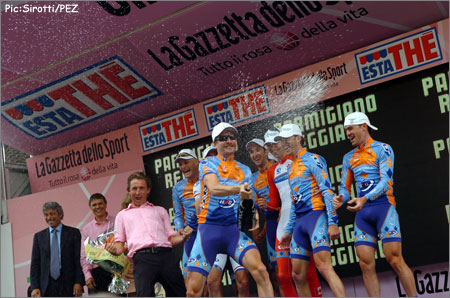 So that’s the first stage over and we have a North American, Christian Vande Velde in first place wearing the first Pink jersey of this year, the race is wide open and it’s a long way to Milano, stay with PEZ for all the action. 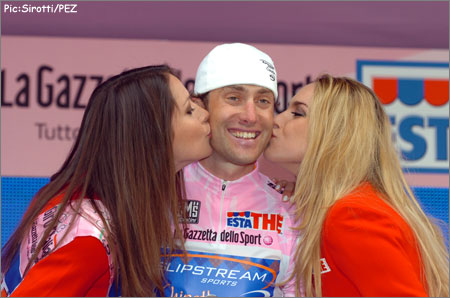