The eleventh stage of the steady flow to Milano was another tough, lumpy affair. The course, reminiscent to the one a few years back when Emmanuele Sella burst onto the scene, saw intense action throughout, but it was the early break that settled the day and divvied the spoils amongst themselves.

Is it something in the water in the area around Cesena? The region that produced Marco Pantani, one of the most thrilling riders in bike racing history, also has a habit for producing fantastic bike races, and today was no different. The arduous 199km journey from Urbano to Ceseno was about as lumpy as two week old milk left in a hot car in summer. There was nary a bit of flatness, and nary a piece of straight road, which combined with some crappy weather and wetness made for a crashfest and a damn fine, hard bike race…and nearly a big change atop the general classification.

The day’s break was once again not reeled in and a battle weary, beaten all to hell from hill after hill group headed into the finish. Pablo Lastras attacked something around a number that I don’t even have fingers to count with, but couldn’t quite get away, trying desperately all the way to avoid a sprint amongst the leading group of six. In the end, his attacks were fruitless, and a sprint was the order of the day, then POW, to go along with one of the themes of the day, CSF’s Fortunato Baliani wadded it up in the final turn, and gifting the win to Serramenti’s Alessandro Bertolini, as Pablo Lastras couldn’t get back to the Italian’s wheel after the tumble. 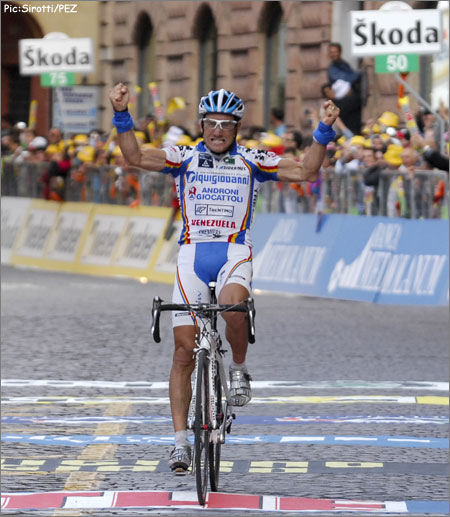 What Could Have Been
It could have ended so, so differently though. What ended as a fairly typical successful breakaway kind of day, with the field only a couple of minutes back with the likes of Bennati and Zabel sprinting for points, we nearly saw a huge upset with LPR’s Gabriele Bosisio making a great bid for the lead and the ‘field’ shredding to pieces. Let me explain…

The break of the day wrested itself free of the iron grasp of the field 40km into the day – composed of Alessandro Bertolini (Serramenti), Pablo Lastras (Caisse), Tizziano dall’Antonia (CSF), Laurent Mangel (AG2R), and Jussi Veikkanen (FdJ), the break jumped to an 8 minute gap at one point, right about the time the race was preparing to detonate behind them. 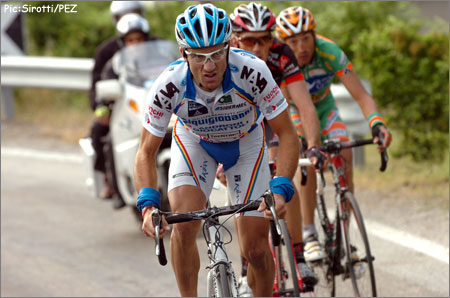 LPR took the reins and commenced to thrashing the living snot out of the field on some of the smallest roads I’ve seen this side of the Mortirolo. Literally, a paved goat path was the scene of the LPR marauding, amidst terrible rain. The bomber had flown by and dropped its goods on the field and riders were scattered across every bit of Pantani’s stomping grounds. Visconti was GONE, and the lead group was a tiny little excuse for a group.

The descent was almost more enthralling than the disaster that was the ascent. In the leading group, Dall’Antonia and Bertolini both took to pavement suffering, whilst in the field Sella and Rujano took dives and the descending suddenly began to take on the shape of a child just learning to walk. 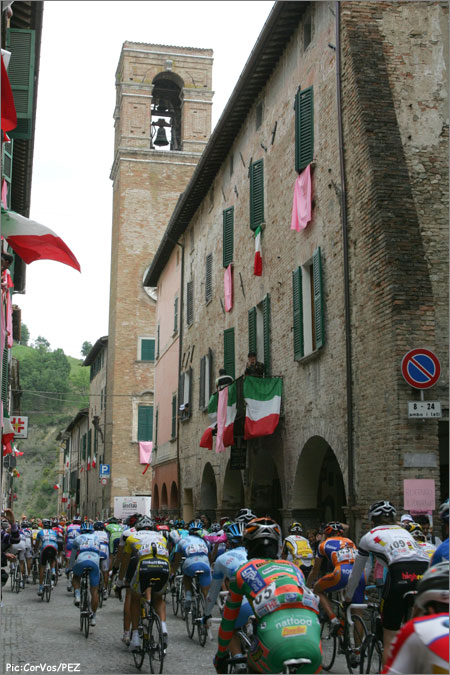 Yeah, this definitely isn’t the climb, but it’s pretty nonetheless, so enjoy it.

Amidst this carnage, LPR’s Gabriele Bosisio (3rd overall) and Fortunato Baliani (CSF) got away and rapidly began to eat into the break’s lead.

And just as the field had been ripped to pieces, LPR eased off the throttle and the remnants began coming back together as B and B ripped across the gap. Suddenly, Visconti’s time in Rosa seemed very numbered, and Bosisio looked to have made a genius move. 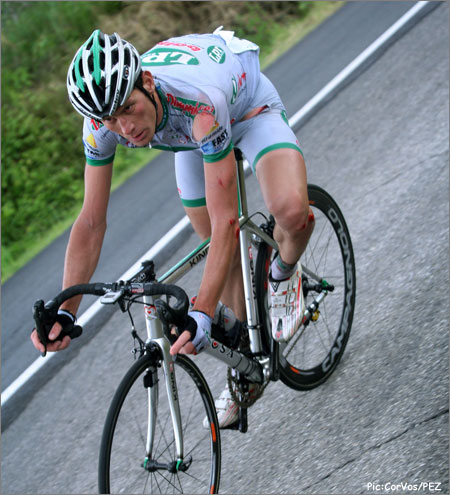 Bosisio got a torn jersey and a lot of frustration instead of the could have been Maglia Rosa.

Then, just as they were getting close to making the junction, Bosisio caught the Stage 11s and wadded it up. Baliani didn’t look back, rode across and made the safety of the confines of the break, whilst Bosisio was left with nada and was eventually caught.

Confusing?
Yes, LPR’s tactics might have seemed a bit confusing, but the terrible pace they set on the climb made perfect sense in the hopes of bringing the break closer and then trying to send a lesser rider with hopes of Rosa across at the right time – enter Bosisio. Bosisio executed perfectly and nearly pulled off a righteous coup, but unfortunately it was Stage 11 and he caught the bug. Had Bosisio made the juncture and taken the necessary time, the tactics would have been interpreted as genius. 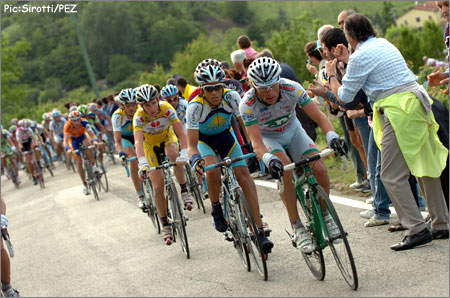 Back To Business
At this point, the break was gone, not to be seen till the finish. The racing still wasn’t over in the field though…the likes of Riccardo Ricco and Danilo Di Luca were hell bent on trying to force a selection throughout – both were extremely active and extremely potent in their attacks, but no one could quite snap free, but it sure made for some nice scenes of hyper-hard moments.

Yep, There’s Another One
Holding with the dominant theme of the day, there was a big wreck with 27k to go involving race leader, Giovanni Visconti. Poor Visconti struggled all day long, and profited greatly from the assistance of World Champion Paolo Bettini who protected, prodded, pushed, and guided Visconti every time he was dropped or put under duress. In the end, it was a tumble with Levi Leipheimer, Emmanuele Sella (who managed to kiss pavement THREE times today), and Christian Pfannberger that might have done him in though. Visconti managed to finish with the main group, but immediately after the stage he was ushered off to the hospital and his start for tomorrow is suddenly in doubt. 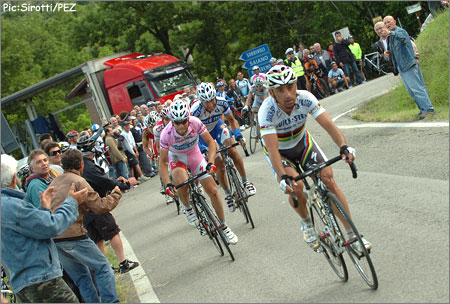 Bettini ushered Visconti around the tough stage, but there was nothing Il Grillo could do for his protege when he came to grief with 27k to go.

In Summation
Was this a chaotic race report? You betcha. Was the race chaotic? Oh boy howdy was it. The weather, the narrow roads, the aggressive nature of some of the favorites, the falling down – all led to what was some sort of melee organized by RCS.

Bertolini post-race: “I have never succeeded in winning a stage of the Giro before…I am very happy. I thank Simoni who after the Carpegna gave me a free way and told me to ride to win. After the finish he had embraced me and was in a state of beautiful emotions. Now, I will give more than ever to carry him to the podium in Milano. I have succeded to win despite a bad crash and a injury to my elbow which constrains me to go to hospital for an xray,” thanks to Gavia over yonder at PodiumCafe for the quote!

With the aggression that has shown itself already this Giro, I think we can rest assured that the mountains will be the site of some kind of entertainment we’ve not seen since the olden days. It’s beautiful, it really is.