There was a photo finish taken out by a home favorite who’ll get a lot of headlines, a lot of press and at least a little attention from the pretty podium girls. But there is always another hero, an alternative man for the people on a day like today. Who put himself out to be shot at on another long, hard road through the country?

It took a jury of the great and the good to separate Daniele Bennati, as winner in his homeland, from Mark Cavendish as they hurtled over the line together. The Italian had been leading but saw the young Manxman come roaring up to him on the line. That’s what the TV people are focussing on with a string of replays … 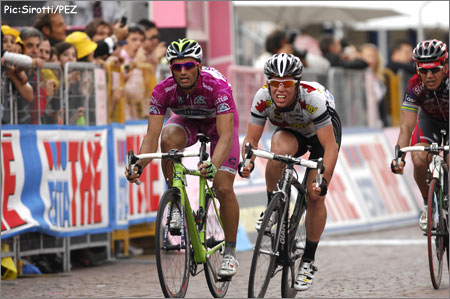 But today was all about Dionisio Galparsoro, the bravest of the brave, venturing out alone after a hellish hard stage yesterday. Like a Western gunslinger, he squinted at the route map, liked what he saw and figured today was ideal for some sort of “… a man’s gotta do what a man’s gotta do” mission. 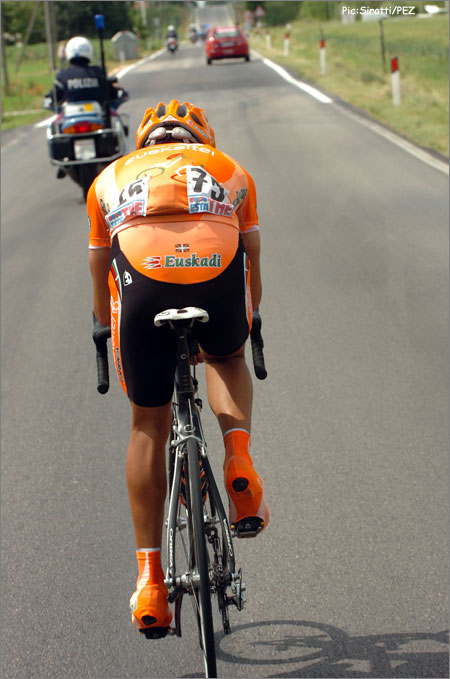 Off to the lonely races…

Not one of the sport’s more famous names, the Euskaltel rider rode out from the flag, looking for glory. 172kms is a hell of a distance with no-one to help you. Lurking in the back of the mind is the thought that some of the world’s finest bike riders will be personally chasing you down. 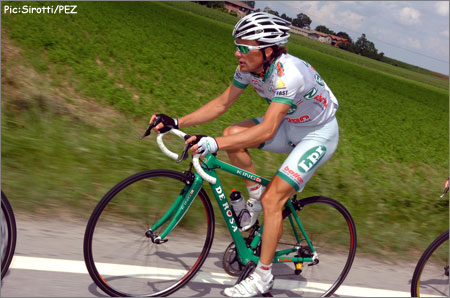 Di Luca and the GC boys had a nice day off…

The course favoured a glorious last-stand defeat (not a failure) rather than a heroic cavalry charge victory over the great expanse. Today we had pretty much uninterrupted flat the whole way, meaning that the sprint trains would be rolling well before the twisty, serpentine finish. 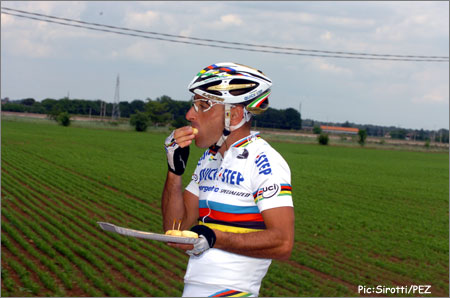 While Galparsoro slays himself, Bettini enjoys some pastries.

Our solo hero pushed on as the peloton kept a steady rhythm behind, and his lead after about a third of the course was tenderly nuzzling the quarter-hour … but tenderness rarely wins any bike races. 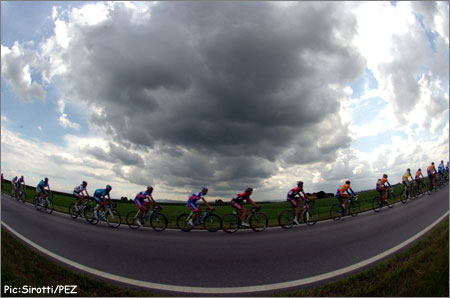 Pastries in the field or solo break…?

Sure enough, the skyline behind him eventually silhouetted an advancing army of speed. Milram, Liquigas, Silence-Lotto and High Road loomed on the horizon as Galparsoro inevitably slowed. Matt Lloyd, the current Aussie road champ was on the front for long spells – a green-and-gold indication that Robbie McEwen was in the mood. 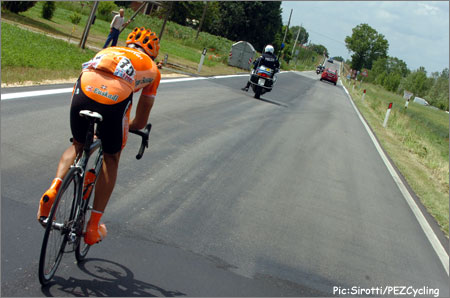 Some reports will tell you that “… things only became interesting when the sprinters’ teams started to work.” That might have a ring of truth, but it’s also spectacularly unfair on a man riding so hard he probably took a year or two off his life.

Euskaltel might know they don’t have an overall contender for the Giro, but they also know that their Basque fans back home want to see them livening things up … so Dionisio took up the long-break challenge today. 11kms from home the escape was over. 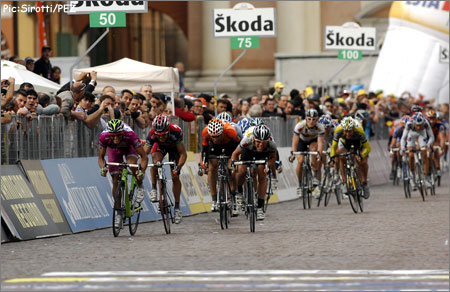 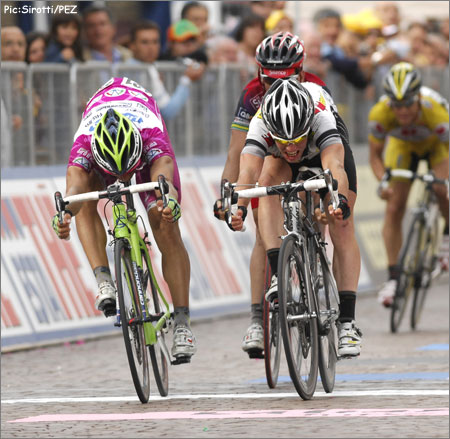 High Road then took charge as Bradley Wiggins put his pursuit speed in service of Mark Cavendish, while Marco Velo earned his Euros guiding Erik Zabel back to the business end of the deal after some crash involvement.

McEwen was nicely tucked in on Cavendish’s wheel and jumped left, as Bennati gave it full gas on the right. Cavendish just missed getting on terms; McEwen took third ahead of Galparsoro’s team-mate Koldo Fernandez.

So, Dionisio, you didn’t make it today, but, sooner or later, the cavalry are going to leave you out there just long enough. 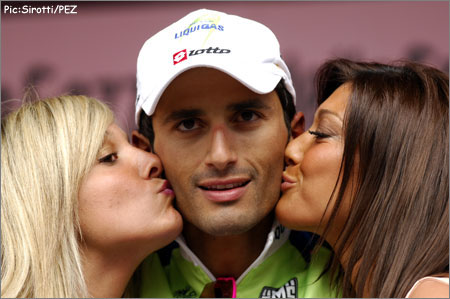 It’s another stage for the fast finishers tomorrow, before everything goes vertical on Saturday. The Giro approaches what will be a corking final week. Keep it Pez for everything from the roadside!