The Giro has been anything but easy up until this point, but Saturday’s stage to the Alpe di Pampeago signified the beginning of the atrociously hard final week and a super tough three day block. The General Classification was to take a good hard knocking – the question is who would come out where, and whether the Astana Armada would prance away.

Again, as almost seems to be normal in this Giro, the breakaway had the chance to go the distance. The break went early at about the 10km mark with 7 riders: Christian Vande Velde (Slipstream), Paolo Bettini (Quick Step), Jure Golcer (LPR Brakes), Emanuele Selle (CSF Group Navigare), Jose Rujano (Caisse d’Epargne), Joaquin Rodriguez (Caisse d’Epargne), Vasili Kuryienka (Tinkoff), Rinaldo Nocentini (AG2R), Jens Voigt (CSC) and Charles Wegelius (Liquigas) a little over ten miles later three more riders found their way across the chasm between break and field: Maxim Iglinsky (Astana), Francisco Perez Sanchez (Casse d’Epargne) and Yoann Le Boulanger (Francise des Jeux). Instantly, mine eyes alit with the possibilities out of the break, as nearly all of the riders were capable in the mountains and a possibility to take the top spot. 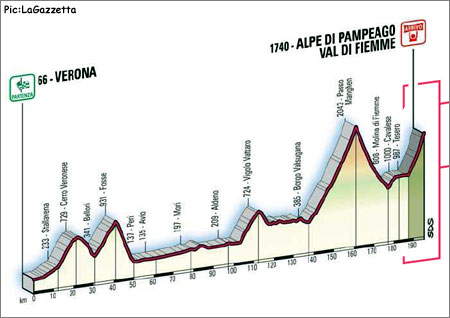 After the establishment of the break, the field was content to let them pull on their leash with Serramenti and Saunier Duval taking turns taking the break for a walk, but this break was no small time chihuahua, it had the horsepower something akin to a horse attached to a leash held by a small boy, and thus the efforts to keep the break in check were fruitless. 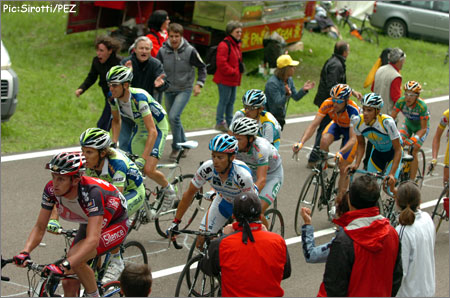 The time gaps among the favorites were not terribly huge today – look for tomorrow’s stage to really see a difference made.

The race finally hit the big mountains 140km into the 190ish km stage and the long ascent of the Passo Manghen was first on the docket at 23.4 km long, an average gradient of 7.1%, with a max of 15%. Not long into the climb, CSF’s Emmanuele Sella paid his due respect to his breakmates, clicked down a few gears, and bid adieu for the rest of the day. At the base of the Manghen, the break was 6:35 in front of the field, and by the time Sella made it to the top, he had 9:00 minutes in hand! 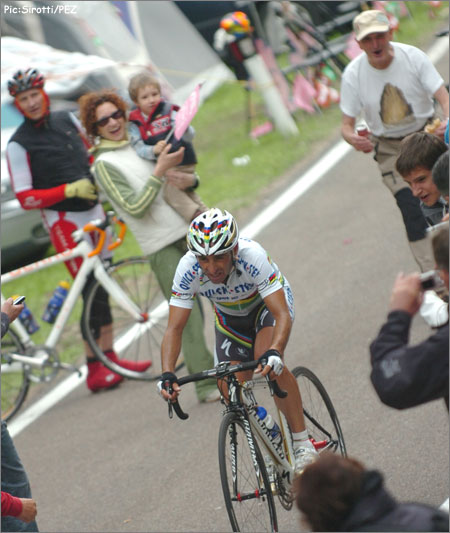 Bettini was one of the casualties in the break of Sella’s onslaught.

Sella was on fire, and the favorites weren’t quite firing just yet. They were going plenty fast enough to shake out the rotten fruit from the tree including race leader Giovanni Visconti, but not nearly hard enough to cause any real selections. That would wait until the Pampeago. 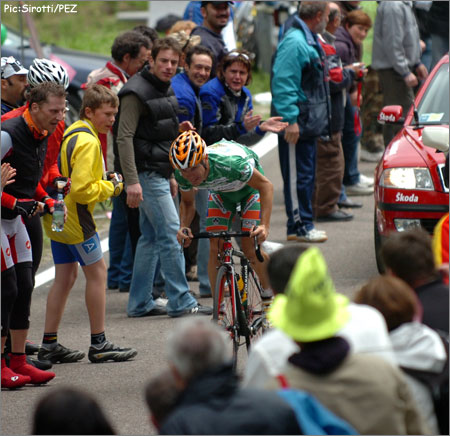 Behind Sella, who continually drew away into his own world of future glory and suffering, the break of course began to splinter, detonate, crumble, and devolve into nothing but small bunches of desperate emaciated bodies making their way wearily onward, with already two weeks of suffering thrown on their shoulders and another week that will rival two hard weeks put together. 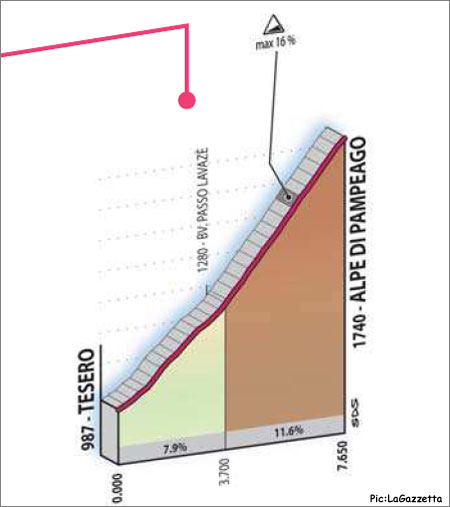 The only news from the field was that Visconti wasn’t with the leaders and was hemorrhaging time with every pedal stroke. Down they came off the Manghen and nearly straight on into the Alpe di Pampeago. 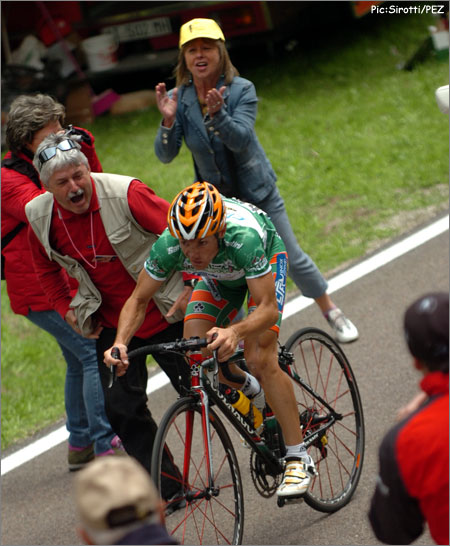 As Sella hit the first slopes of the 7.6 km, 9.6% monster, he had ten and a half minutes on the LPR led field and several on his former companions in the break. He set to work taking care of the business of not falling over, getting mauled by a fan, or breaking a leg…and he acquitted himself well, even as the world saw him crumbling with two kilometers to go, the pain chiseled into his brown face, the weight of the effort slamming down upon his slight figure. 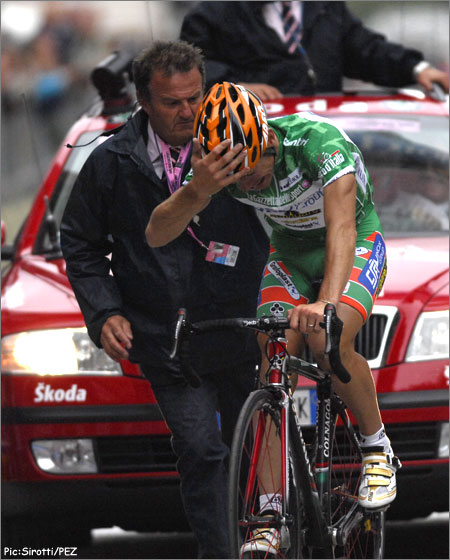 Surprisingly, the group of favorites was still largely intact for the first bit of the climb: 20-25 riders vying for the scraps remaining behind Sella’s rampage. Gilberto Simoni isn’t one for sheep-like riding, and with 3k to go put in the first real attack to whittle down the leading group to a better, more predictable size. 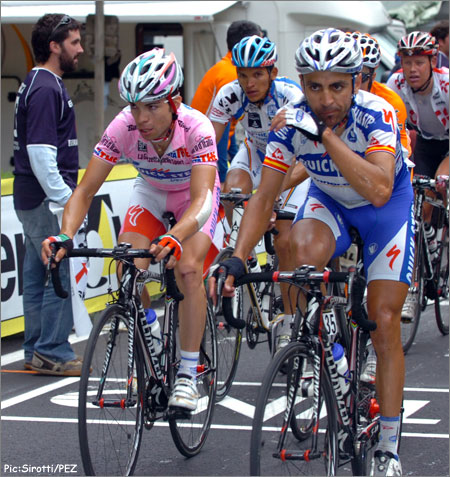 At this point in the stage, Giovanni Visconti was three days down and on the internet looking to hire a sherpa.

Then the unexpected happened – all three of Astana’s vaunted triumvirate seemed to quake simultaneously: Levi was dropped with authority, whilst Contador and Kloeden looked bad, but managed to stay close enough to contact. 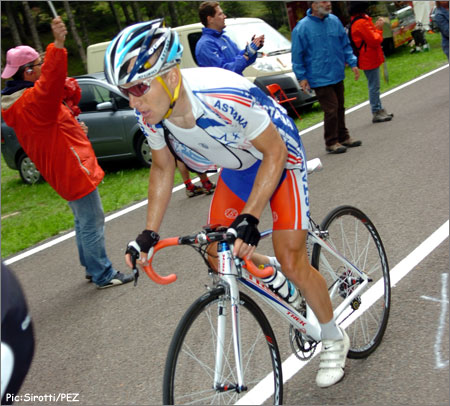 Levi Leipheimer was not on his best today, nor were his two teammates, Contador and Kloeden.

As the Triumvirate wilted, Pellizotti and Simoni attacked, and then Denis Menchov took out his broad sword and lay down a vicious swipe across the scalps of all contenders present. He didn’t take too much time in the end, but in the waning meters of the day when all were at there limit – Menchov was just that little bit further above.

In The End…
The time gaps between the GC favorites weren’t terribly huge. Sella was waaaay down on GC to start the day, so even with his dominating ride he didn’t manage to leapfrog into some sort of GC contention, but amongst the others, the gaps were not nearly as significant as I would have thought. Contador was awful and still only lost 45 seconds to Menchov. Looking at the Top 20 at the moment, everyone is withing five minutes: this will of course change drastically as we delve into the dark heart of the Dolomites tomorrow with a six-climb, 153km saga through the upper reaches of hell. 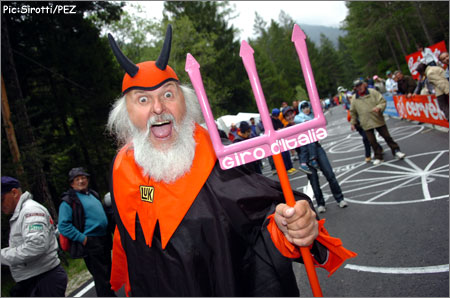 Welcome to the mountains folks, Didi is in town, you know it’s time to get down to business.

Rider Comments – Compiled by Alessandro Federico
• PELLIZZOTTI: Nobody was moving and I did it. I had to recover a gap and that’s why I was hoping for a harder race. Then it was the first mountain stage of the Giro and I wanted to see how I really feel. I’m satisfied and now I look forward tomorrow.

• SIMONI: Only my team has worked to try to close the gap on the break. Behind us just lot of fear. Nobody has moved. At the end the quiter, Menchov, is the one who climbed better.

• RICCO: I slept badly. I took cold in the past days and I felt bad all night. I had to defend and I did it. Simoni and Pellizzotti are the strongest at the moment.

• DI LUCA: Last climb was very hard. We have now Bosisio in Rosa and this will help me. I need to recover well because I have to close a small gap between my contenders. The most favorite at the moment is Contador.

• SELLA: I’m so happy. I’ve done something great. The last two kilometres were terrible. I had the impression they never finish and I was afraid to see somebody behind me.

• BOSISIO: Everybody here is tired because this is a difficult Giro where every stage something happens. This was the first mountain stage and this is the reason why the bunch took it slowly. Tomorrow I expect more gaps between the favourites. I am the new Rosa jersey but Di Luca is our leader.