After another ‘throwback to the Fifties’ performance, Emmanuele Sella is on the podium again with a breathtaking victory on top of the Marmolada. Behind him, the race for the maglia rosa went into overdrive as the big names took turns to try and stick it to each other.

Today was like watching archive footage, as the riders barely existed their way up the vicious final climb of the Marmolada, AKA the Fedaia, AKA the Dolomiti Stars resort. Doesn’t matter how many names are used for this climb, it’s a murderer.

It was like watching shipwreck survivors clambering onto the reefs of salvation. If the pictures had been black-and-white, you might have imagined you’d see riders with tyres wrapped round their shoulders climbing through the rain. 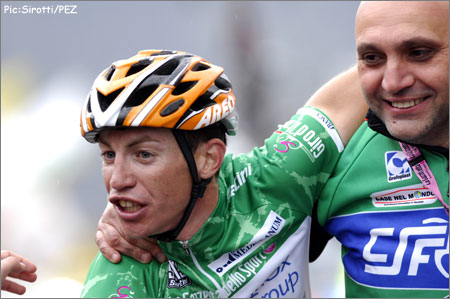 Back to back stage wins out of a break…in the mountains…solo…unbelievable!

Sella deserves the accolades after another fantastic performance. He was off the front as early as kilometre two (!!) with Joaquin Rodriguez as a willing apprentice. For such a brutal stage, the action exploded like a Catherine Wheel, a kaledescopic Pink Floyd show of ever changing attacking groups, but the major constant was Sella. 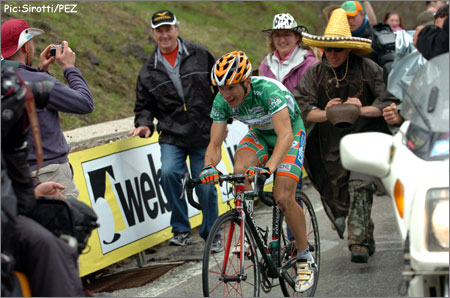 Rujano appeared, Karpets, Bettini and Voigt as the riders charged up the Passo Pordoi – highest point today at 2240 metres. Then it was onto the San Pellegrino as the lead group swelled to nine men heading the peloton by 2 minutes or thereabouts. Funnily enough, someone might want to theorise about this – the lead basically stayed around the two-minute mark for the whole stage. 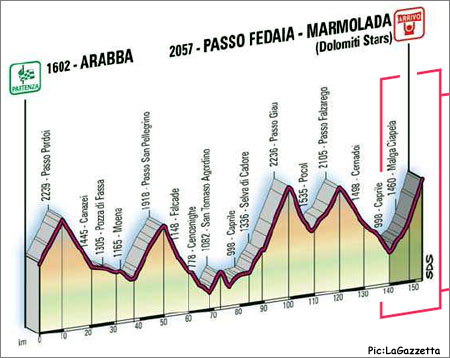 Yep, I think Cavendish is in with a shot today.

LPR were dragging the main field along for Di Luca and Bosisio. Sella was first, again, over the San Tomaso Agordino, then onto the ferocious Passo Giau it was Sella once more first over. 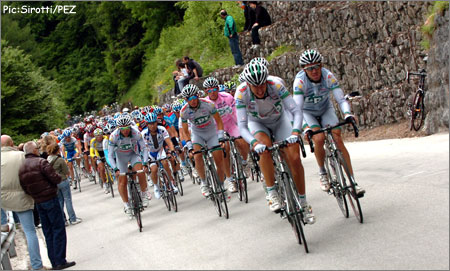 LPR shouldered the burden on the front and saw a good ride from Di Luca in the end.

Behind, Pellizotti, Di Luca and Contador shook things up with attacks which saw Kloden lose touch and the lead group go through a major shedding of riders. 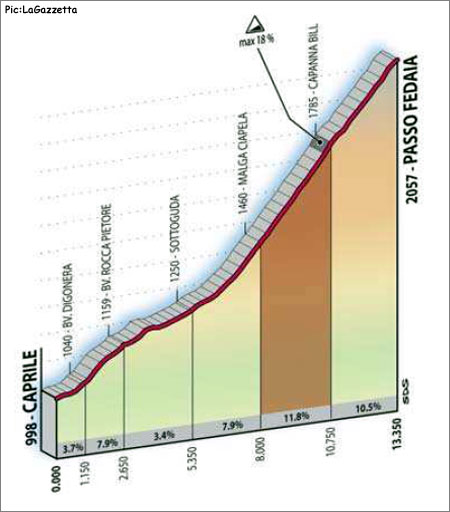 Oh yeah, for sure, this is one for Bennati and Cav.

Hitting the base of the Marmolada, Sella was in a group with his buddies Baliani and Perez Cuapio, and Rodriguez of Caisse d’Epargne and Nibali of Liquigas.

Inevitably, facing the toughest ascent of the race so far ….. he attacked! The climb just gets harder and steeper all the way up – 8% average gradient, spiking up to 18% near the top. 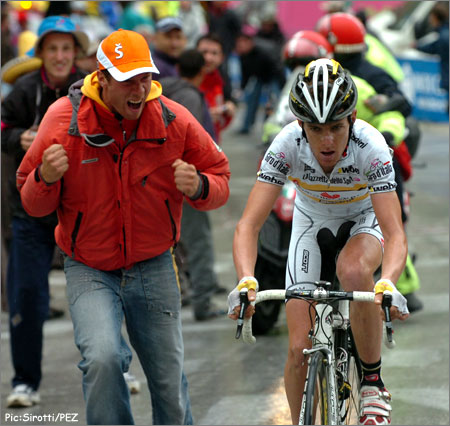 Riccardo Ricco let his legs do a little talking today, which was a welcome respite from his wagging jaw. Unfortunately, he only picked up a handful of seconds for his efforts.

Sella, alone like yesterday, continued his slo-mo grind to the summit, face contorting like a performer in a circus of pain. The fans jogging alongside screaming encouragement eventually got so much in his face that he had to fend them off. 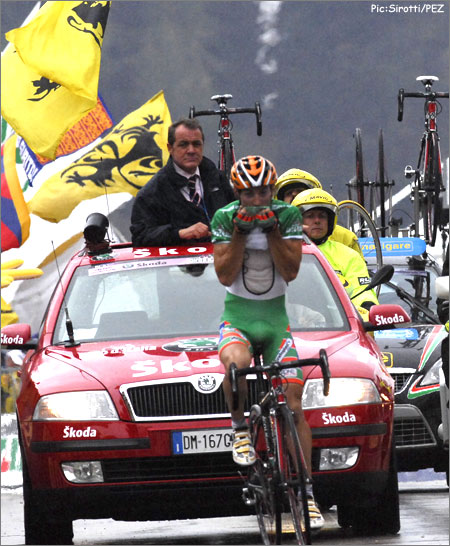 Happy happy day Version 2.0 for Sella and CSF, not to mention the fact that they made it 1-2 today.

Head, shoulders and torso bending, but not breaking, Sella drove on in a private gravitational battle. Behind him, Pellizotti was trying to turn the screw on Di Luca and Ricco but couldn’t get away. 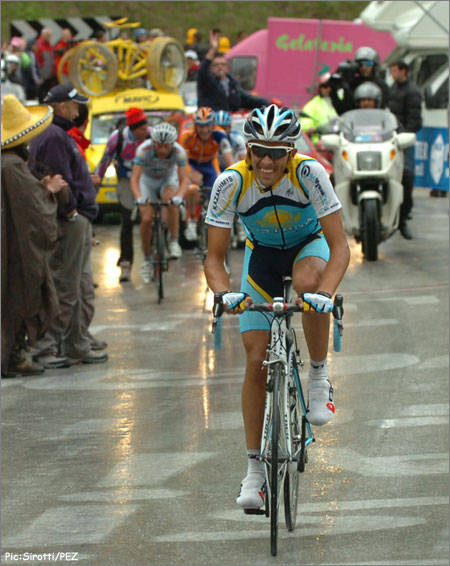 Bert looked better today, and that’s the most ominous sign of all, because one can be assured he’s going better and better.

Then Ricco jumped, chased initially by Menchov and Contador. They steamed past Rodriguez as if he’d stopped for a picnic. Then Ricco was alone, the other two going back as Simoni dragged Di Luca along. 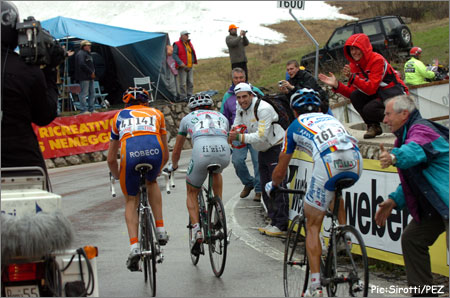 Di Luca, Menchov, and Simoni all acquitted themselves ably, only losing the minimum in time. 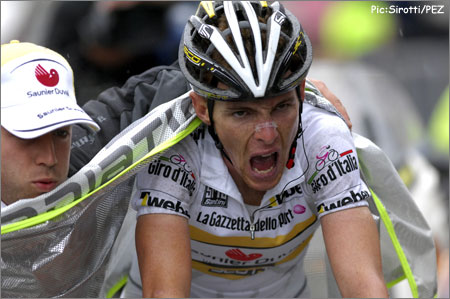 Like yesterday, Sella seemed to spend as much time looking over his shoulder as he did looking ahead, not quite believing he was going to make it two in a row, glancing desperately across every hairpin he took in the road. 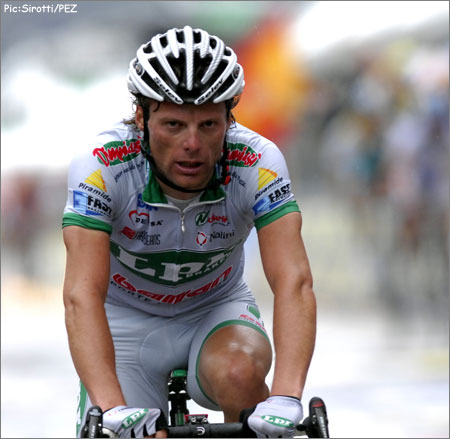 It hurt to watch just how slowly Sella was desperately grinding his cranks, but he straightened up after the last bend and enjoyed the last 75metres, kissing his wedding ring, then burying his face in his beloved maglia verde. 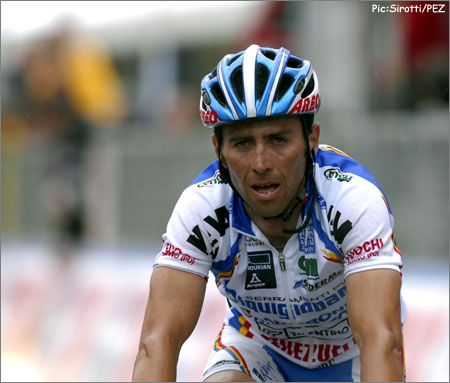 Di Luca’s soaked grey tunic matched the dirty snow fields and the cold dank atmosphere to a tee. Ricco had given it a major dig to break clear in the last 2500 metres, but all his efforts gained him a scant 9 seconds on Di Luca and 16 on the Simoni/Contador tandem.

The reigning (raining?) Tour de France champion did enough to move into pink with a half-minute on Ricco. 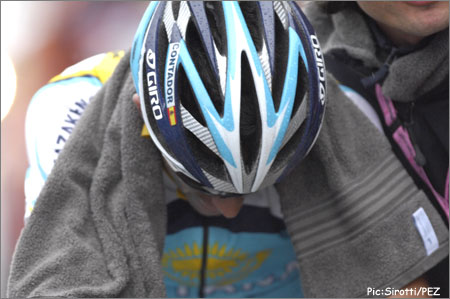 Jurgen Van Den Broeck had another strong top ten, suggesting that he might be along for the Cadel Evans Tour de France tilt sooner rather than later.

Overnight leader Gabriele Bosisio said he would enjoy the experience. I’m sure he will in the future, but it looked desperately hard for him as he suffered home almost 15 minutes down. 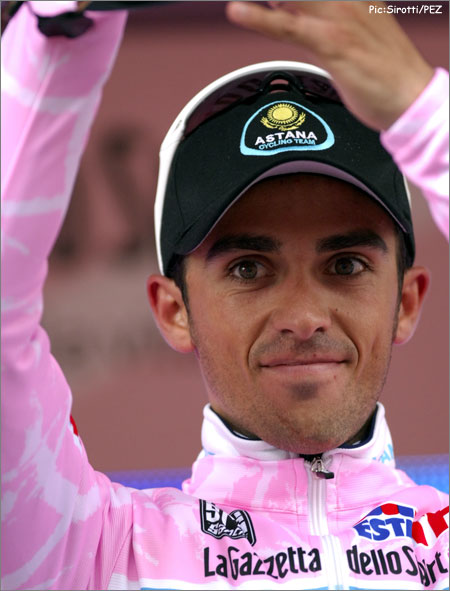 But hey, perhaps the pain was worth it for some time in Pink…perhaps he’ll carry Rosa all the way to Milano? 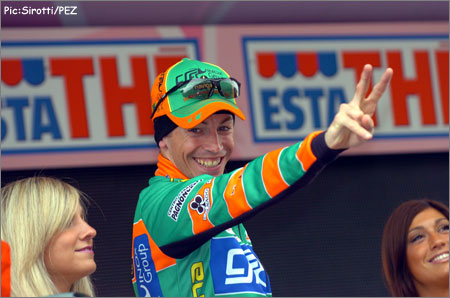 Ed will be roadside, and back in Pez HQ we’ll be keeping an eye on all the action on the day and you’ll find all the back stories, firm facts, gossip and rumour in Eurotrash. You know it makes sense to keep it Pez!

Rider Comments – Compiled by Alessandro Federico
• SELLA: Again another great stage for me. A big satisfaction. I must thank my team mates especially Baliani and Perez. I think that yesterday and today we’ve discovered a new Sella.

• RICCO’: If I think about the crash I suffered during the ITT in Urbino I feel disappointed. Without that I would be in Rosa today! Today I attacked to early but I had to do that because in that moment I understood they were in trouble. I’ll try to wear the Rosa tomorrow.

• DI LUCA: We are all at the same level. I’m not going as I did last year, I’m closer to the Di Luca 2005 when I finished 4th in the overall but I feel I can run for the Rosa also in these conditions.

• CONTADOR: On the Giau I suffered but I climbed regularly. I’ve also eaten and then I felt better and better. I don’t want think about tomorrow. Now it’s vey important to recover well.