Flying is obviously a relative term when the average speed was a whopping 19.14 kph on the sadistic climb of the Plan de Corones today with the finish at the Kronplatz. Pellizotti had just enough to get the measure of mountain king, Emanuele Sella by six seconds, whilst Alberto Contador did not win, but padded his lead to perfection.

There was no majestic, graceful, floating climbing done today. No one will ever make the mistake of calling the actions of the riders on the Corones, angelic. It was a fist fight from bottom to top with rider and machine against a path that could be used for rock climbing lessons. The winning time by Pellizotti saw an average speed that didn’t even cross the 20kmh mark – we’re talking the world’s best here, not to mention the fact that the intermediate time check saw riders well over the 20kph mark, and then…that final section, that 24% bit, took not just power, heartbeats, and heavy breathing, but life. It was nothing short of cruel, and in the same breath, oddly exhilarating to watch the best of the best literally gasping, crawling, weaving their way up what can accurately be deemed a WALL. People use the term often, but very seldom is it appropriate in my book. It was today. 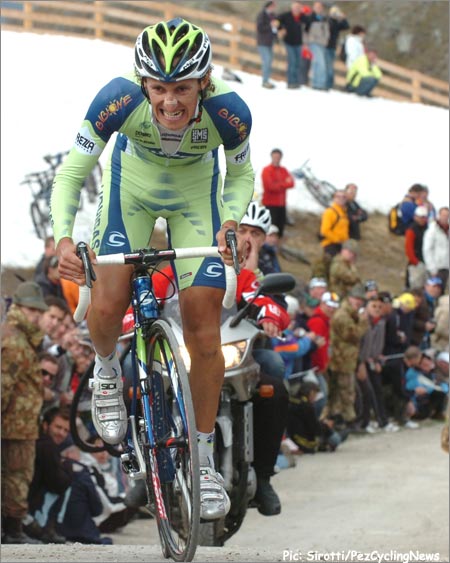 After lurking near the top the last two days (7th and 11th place finishes), Franco Pellizotti nailed the ride of his life to win the hardest TT of any Grand Tour, ever.

Time trials are frustrating days to write about. There’s little to discuss, little to analyze (save for GC restructurings), absolutely no race dynamic, no strategy – just ride as hard as you can for 12.85km, always keeping in mind that there is a section coming up in yonder clouds that will bring you to your knees, the last kilometer. This year, the time trial was even less surprising, not to take away from any of the riders one BIT, but to emphasize just how closely matched everyone is. If anything, this should be encouraging, because whoever takes the Maglia Rosa on the final day, could well get it through not only his power, but through clever racing…we can only hope. 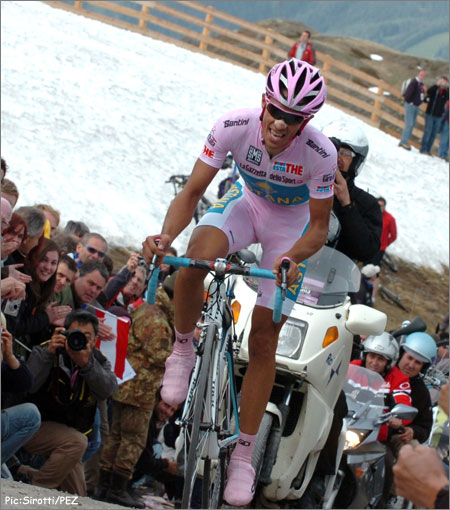 Contador was once again able today. He has been in no way dominant so far, but he’s getting it done.

At this point, I can go back and tell you about the early leaders and the early fast times, but really, who cares? There was very little in the way of surprise today – sure, Pellizotti winning was eyebrow raising, but Pellizotti did not come from four states away via rail to take this win. He has been lurking and more than present and more than aggressive the past two days in the mountains. Sella in 2nd? A Surprise? Hell no. Sella has been climbing at the GC leaders’ pace for the past few days whilst riding in the break all day, or even better, solo. 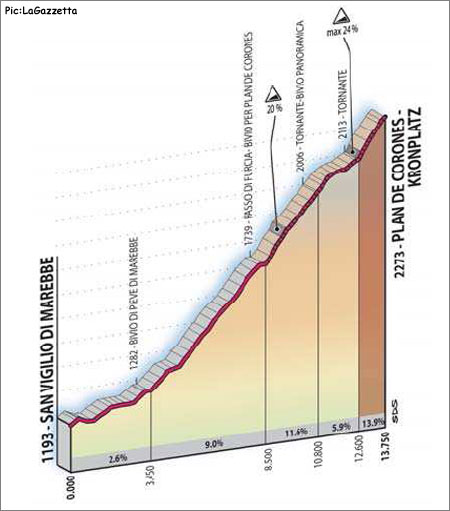 Other surprises? It was nice to see Jose Rujano finally return to something akin to the form that saw him threatening for the overall win a few years back. CSF’s other blazing mountain goat, Pozzovivo showed that his 2nd place on yesterday’s stage was not just fortunate, it was real, and 8th today is nothing to yawn over. Danilo Di Luca and Denis Menchov appear to be the only GC boys to be taking one on the chin – both lost 1:45 and 1:49 respectively today. They weren’t terrible though – 9th and 10th place, and still well within the realm of possibility for the overall win.

There is no domination to be had this year up until this point (and boy could that change in a few days time) – the riders are evenly matched amongst the favorites it seems. The top 7 are all within 3 minutes of each other, and 8th place is Emanuele Sella, and lord knows what he has in store for us this week. 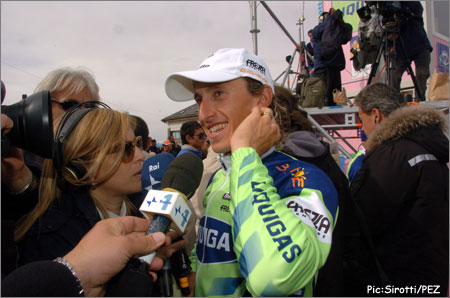 Pellizotti has won Giro stages before – uphill sprint and a TTT, but this was miles above the other two.

It is truly a pleasure wondering who is going which way and how fast. Can we take anything from this TT, or is this more of the same? It really looks like there is no real order, and the results hinge entirely on how good or bad a day the riders are having with the basic fact that they’re all terribly close in ability. If Contador has an off day, he could be out of the running almost instantly – the same goes for any of the top 7. A good day will gain a few seconds it seems and a bad day could see your chances gone. 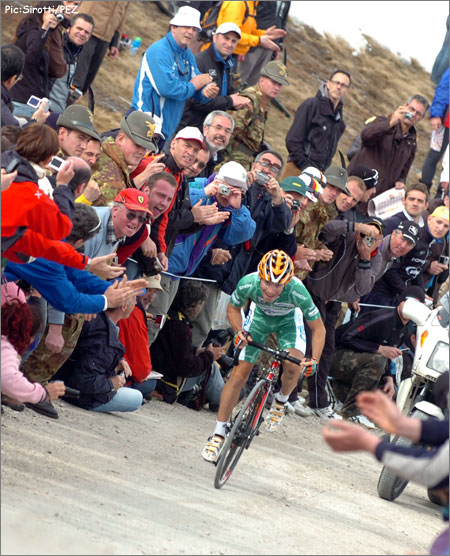 Emanuele Sella has had an outrageous past three days: 1st, 1st, 2nd.

So once again, Alberto Contador rode well. He didn’t win, he didn’t dominate, but he did enough. He put a bit of time into his next closest competitor (Ricco), and lost little time to the few that beat him (Simoni, Sella, Pellizotti). I’m beginning to wonder if he’s going to have something special in store for us once the race hits the Alps in a few days time. Don’t forget about the Mortirolo, friends.

Going on my previous thoughts, if Contador isn’t riding at full capacity yet, we could see him start to pick up speed as we hit the coming mountains. There’s no way to really tell though, and methinks he’s not going to gallop away. There’s a lot of good horsepower on hand and EVERYONE seems to be awesome. You know how every year we list the favorites and it seems only a few come good? Not this year. Either everybody all sucks at the same level, or they’re all flying at the same level, and that’s refreshing. 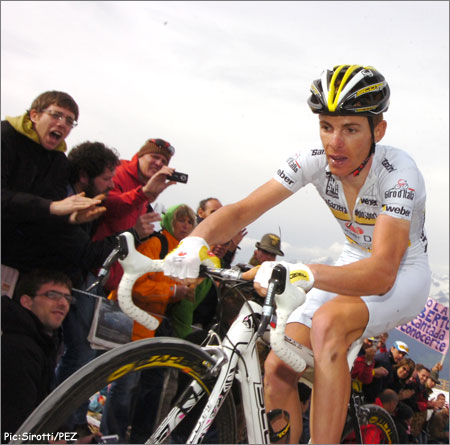 That dazzlingly Italian rivalry between Gilberto Simoni and Riccardo Ricco continued today, but this time with the elder Simoni getting the better hand and cutting his gap to Ricco for 2nd place down to a scant 40 seconds.

Is Gilberto Simoni not impressive though? He is old. There is no getting around that. He is grizzled, tough, and experienced, and every year the chorus grows louder – sure Simoni is fast, but he can’t win, he’s too old, and yet every year we’re shown a fabulous Simoni who comes to the Giro perfectly fit and 100% ready. Simoni could still very well win this, unfortunately for the likes of Simoni, Ricco, and everybody else not named Contador or Bruseghin – there’s a flat 29km time trial on the final day, and Contador is probably going to win it. 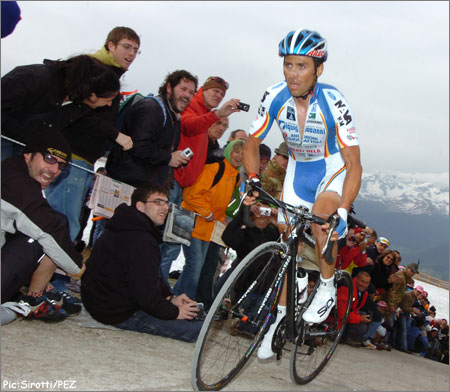 How about Emanuele Sella’s past three stages? 1st, 1st, and 2nd. He came within six seconds of making it THREE stages in a row. Unbelievable. Going into this three day jaunt through the Dolomites, Sella was in 44th, 24:22 back. Now little Sella is in 8th, only 4:25 back. 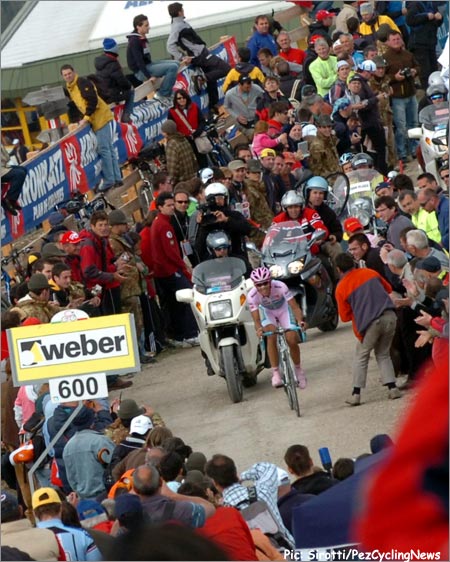 In contrast to his explosive riding of last year’s Tour, Alberto Contador has spent this Giro methodically and consistently taking time out of his rivals, to now lead 2nd place Ricco by 41 seconds. 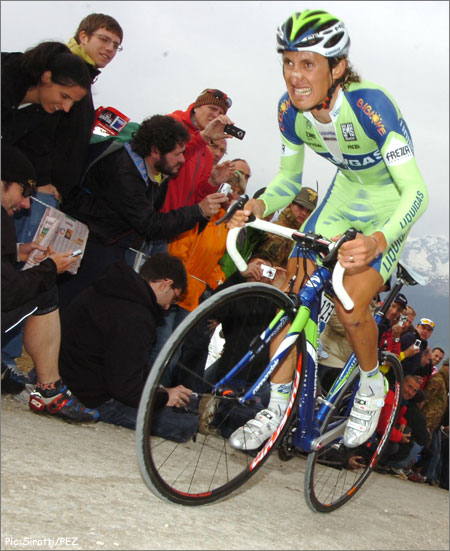 Stay tuned for our full report – plus roadside action from Ed Hood!

And The Riders Shall Have The Last Word
Thanks to Alessandro Federico!

PELLIZOTTI: I rode as fast as possible; I didn’t have any reference and I’ve given the best of me. I demonstrated in the last three days that I have good legs. This is a great day, I think this stage will remain in the cycling history.

SIMONI: I believed I could win, but the level of the contenders is so high. Till now the race has been nervous but tactic. I think that starting in the next stages we will see a complete different race. There are still steep climbs and many strong climbers. Now I believe that yesterday we’ve made a mistake on the Giau when we didn’t insist with Contador in trouble.

CONTADOR: My target was to maintain the Rosa jersey. I did it and I also increased my gap on Riccт. In the last kilometre the wheel was slipping and I lost some seconds there. I’m happy that tomorrow is the rest day.
– From Astana Press: “I had to use a 34×30 gear. It was necessary to prevent slipping away on some parts where you could not come out of the saddle. This morning I went to check out the climb very early. Honestly, I liked what I saw. This was something for a real climber like me. After my performance of yesterday, I was more confident before the start of the race than I had been at the start of Sunday’s stage. Plus today I did not have any technical problem like I did yesterday when I had to do the Marmolada climb with a defective wheel.”

SELLA: I think Pellizotti is a good winner for this stage, as I was already thinking to make three. I’m ahead now in the overall. This is still a Giro to ride.

DI LUCA: I was riding with a good pace, but at the end my time was bad. I started well but maybe during the climb I lost some strength.

RICCO’: I’ve given everything. In the last kilometre I was in trouble because I felt like the bike was out of control because it was slipping. Congratulations to Pellizotti and Contador. Everybody is still near and we’ve still to play everything. It’s not finished yet and till Milano I’ll try to win.

Giro di PEZ: Nowhere To Go But Up