The Tinkoff team came up with the goods as their rider Vasili Kiryienka profited from getting away from the day’s huge breakaway, but the big names put on the show behind on some of the few remaining passes on the march to Milan in the 2008 Giro. Contador lost time, but held on to pink; by the hairs on his chinny chin chin, as Di Luca, Ricco, and seemingly everybody else launched plane loads of attacks. At the end of the day, the Giro had been turned upside down.

***NOTE: Be sure to catch tomorrow’s decisive stage on CYCLING.TV

As Milan inched closer, the weather gods decided that the 2008 Giro needed a bath, and promptly began dumping rain on them shortly after the start on the 19th stage rolled out of Legnano. It was about 170km of relative flat before two beastly climbs reared up, the Passo Del Vivone, and then the Passo Della Presolana, which has one of the most fearsome descents of the race. 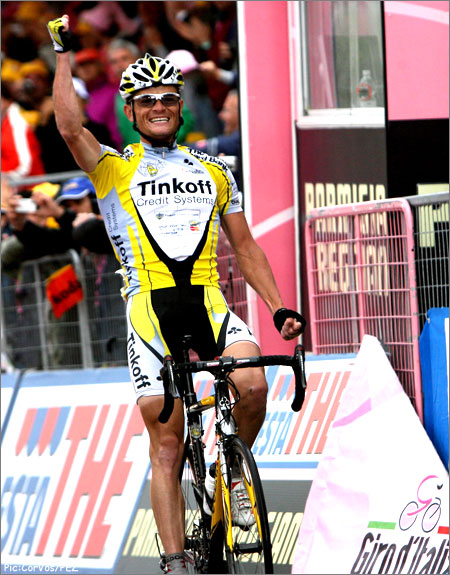 Vasili Kiryienka managed to hold off the rocketing Di Luca to survive to the line and take a great win after over six and a half hours of suffering. 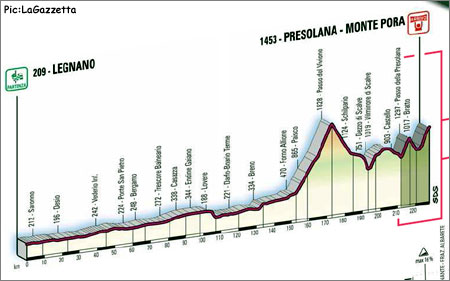 It really didn’t look THAT bad on the profile…certainly nothing indicated to us that fireworks of this magnitude were coming.

The break hit the first climb well ahead of the group, who had finally switched the engine on and had begun to reel them in. You wouldn’t have been able to tell the day’s winner from the first climb, as initially Kiryienka has some trouble but by the summit, the break had shattered and the Belorussian had made the juncture to the business end of the race.

Behind, the reeling was going on in earnest, with all the high placed riders’ teams doing the work to bring down the time gap. What wasn’t at stake was the stage win, what was was the leader’s pink jersey, and Contador and his mates kept a close watch on Ricco, and the LPR boys who were no doubt hatching a scheme. As the Contador group hit the first climb of the Vivone, the gap had come down to 16 minutes and change. Emmanuelle Sella, the upstart climber who was only 4’25 back, took a dig and split with a few Cuapio and Colom to build a nice lead quickly. That didn’t last for too long, but it was an omen of things to come. 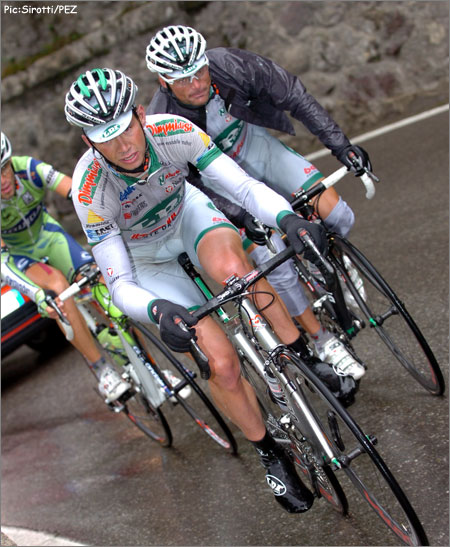 What the, did they just?! Yep, sure did – there go Di Luca, Savoldelli, and Nibali.

But behind, Di Luca laid his cards on the table and attacked – hard – with teammate Savoldelli and Nibali of Liquigas, quickly gaining a minute. LPR were clearly throwing the gauntlet down today with their main men now getting a little over a minute on the Contador group, which also had Colom and Kloden in it helping maintain the steady grind. Conspicuous by their absence were Menchov and Leipheimer. 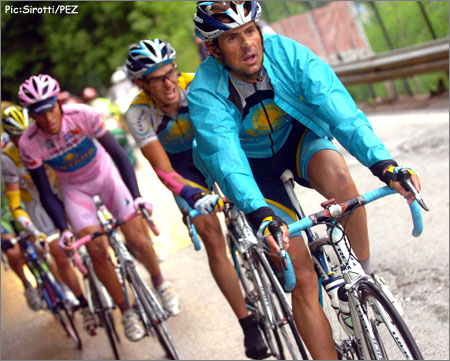 Astana got NO help from anyone else as Di Luca rolled up the road and nearly into the Maglia Rosa.

Ahead, Ermeti excused himself from the break group and hovered, waiting for his LPR captain to come up so he could lend a hand. Savvy team riding for sure. The Contador group was thinning rapidly, but still had the other big names in it: Pelizotti, Ricco, etc.

As the descent came and went, the riders geared up for the Presolana. Di Luca’s trio had almost two minutes in hand. Things were getting dicey in the math department. Would it be enough? 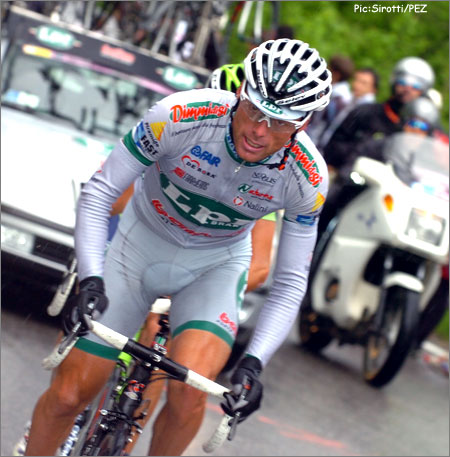 The Killer was outstanding today – he nearly pulled off the ride of the year…if it wasn’t for that pesky Ricco.

At the point of the race, shadow boxing and attacks came down like the rain, and in the end, the Belorussian got the Tinkoff team a very nice stage win in the Giro. It came at a price, as each of those in the break came across the line looking like they had all seen ghosts. Not a nice day, not an easy course. Chapeau to Vasili! 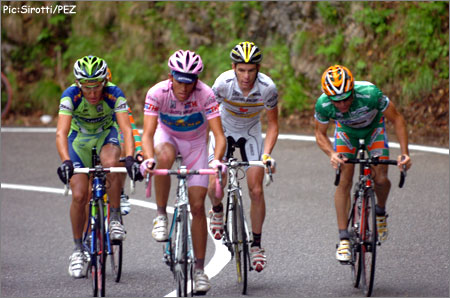 As the lesser climb of the Presolana began, Contador had enough of the escort, and took matters into his own hands, attacking the remains of his group. Ricco and Pellizotti answered, Sella and Brushegin did not. A quick settling down after the initial burst, and Ricco attacked Contador! 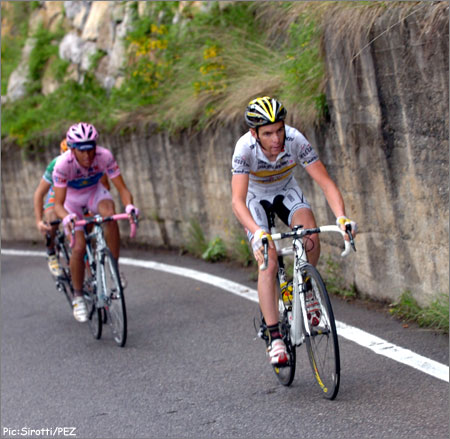 Oh wow, there goes Ricco. I think he got a bike switch, and swapped it with Valentino Rossi’s motorbike. 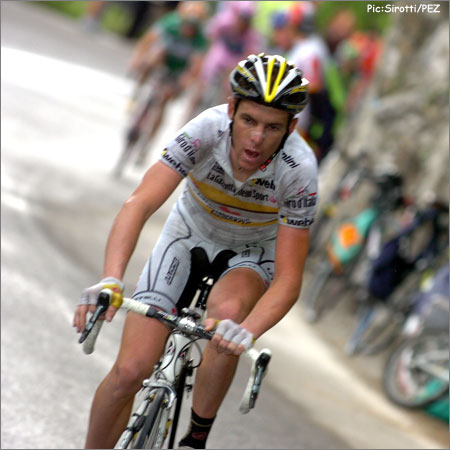 Ricco looked like he sprinted the last few kilometers, and when he missed Rosa by four seconds – his anger was evident.

Each man was in his own pain locker as the end neared. Di Luca stayed ahead of Contador and finished 4’40” behind the winner. Ricco came in 1’07 behind Di Luca, and a battered and exhausted Contador slipped across the line with just enough to keep the pink jersey by a thin margin. How thin? 4 seconds. Count them out loud, just 4 seconds separate Contador and Ricco, and now Di Luca is in a better spot to attack from, too. 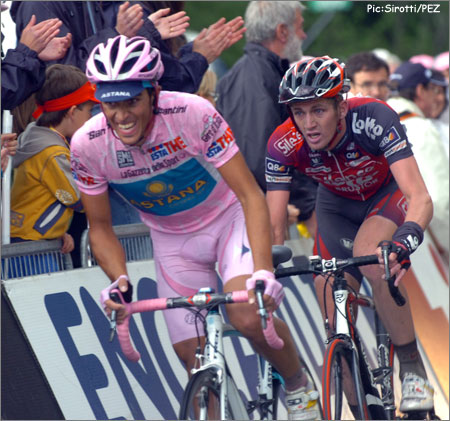 Poor Bert. He has got to be some kind of nervous about tomorrow’s dramatic stage.

This sucker ain’t over by a long shot. The fat lady is warming up her pipes, but who will be on the top step in Milan is yet to be seen! 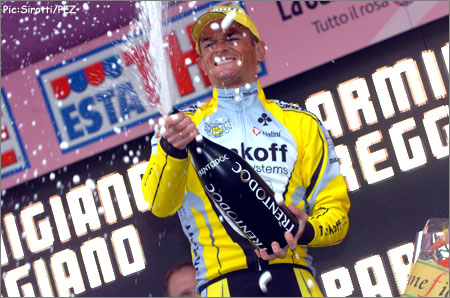 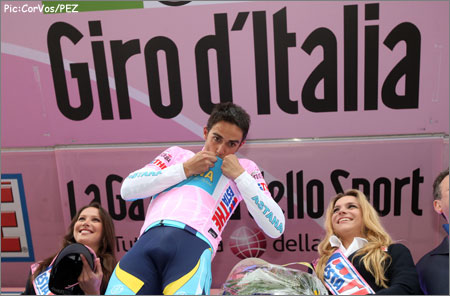 For now, Contador is happy to have Rosa for at least one more night. There’s no telling what’s in store for tomorrow.