He talks the talk, and today, at least, Saunier-Duval’s mouth from the south walked the walk. As the finishing hills wrecked the peloton all over the road, Riccardo Ricco staked his claim to the Giro with a ballsy win.

The 24-year old charged up the final ascent in Agrigento and edged Danilo Di Luca and ‘Tin Tin’ Rebellin for the first road win of this year’s Corsa Rosa. The profile didn’t look kind and it caused all sorts of havoc as the field splintered on the 13km closing circuit around our finish town. 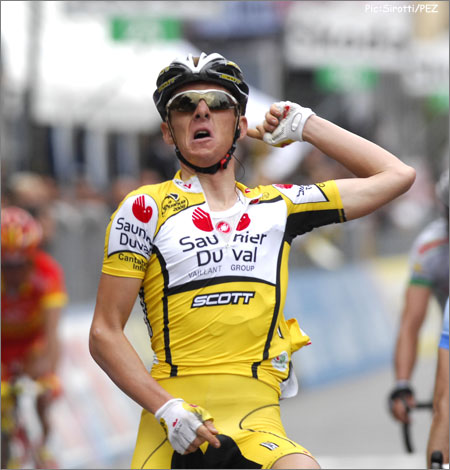 Joaquin Rodriguez gave it full gas in the final 1000 metres but ran dry as a squadra of Italian stars showed just how exciting the first stages of a Grand Tour should be – this is big time racing!

Under the leadership of Christian Vande Velde’s Slipstream boys, the peloton stayed mostly in one piece in the final 40kms, after the day’s escapees had been brought to heel. Then, the pace multiplied by the unrelenting gradient spat half the field out of the equation. Sprinters like Robert Forster found the climbs and speed added up to a whole heap of misery as they drifted backwards. 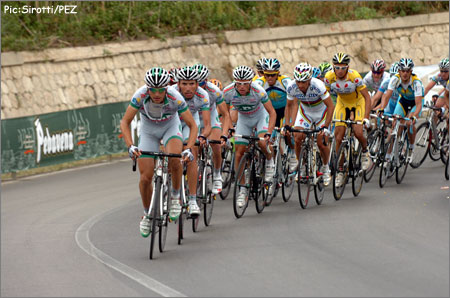 Into the final 3 kms, ‘the team with the longest name in the world’ – that’s Serramenti PVC Diquigiovanni-Androni Giocattoli, who we should probably just call Gibo Simoni’s boys from now on – were up front, alongside LPR looking for Di Luca. As the riders streamed uphill, like a ribbon being pulled off a birthday present, the defending Giro champ looked good.

Then Rodriguez produced his attack and was only overhauled in the last 100 metres, with Ricco grasping the line first ahead of a whole host of names – the finest of Italian stage racers. One of the less well-known, Franco Pellizotti grabs the Maglia Rosa for the tifosi by virtue of hanging in for a fourth place finish. 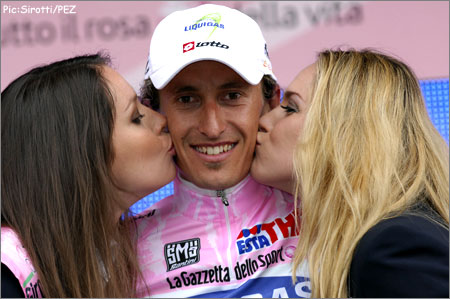 On paper, today’s north-south trip from the port town of Cefalщ didn’t look like one for the sprinters – lots of lumps and bumps, two King of the Mountains climbs, and a sharp finishing ascent to Agrigento. That’s exactly how it panned out. Now, if only the Tour de France would chuck in a profile like that early on? 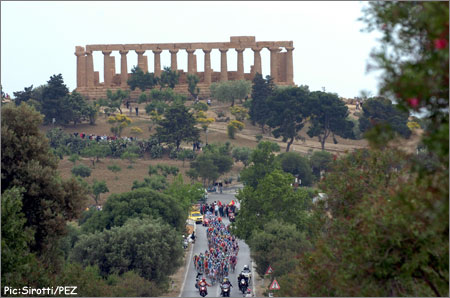 Lots of people were speculating on a win for Di Luca, Bettini or Zabel, while Ricco was keen to throw his own name into the frame. And whadda ya know? He was right!

There seems to be prizes for everything you can think of, so I hope Dionisio Galparoso from Euskaltel gets a little something for making the first escape of this Giro. He didn’t get far, though, and the break that stuck it out was Lampre’s David Loosli, in tandem with FDJ’s Jeremy Roy. 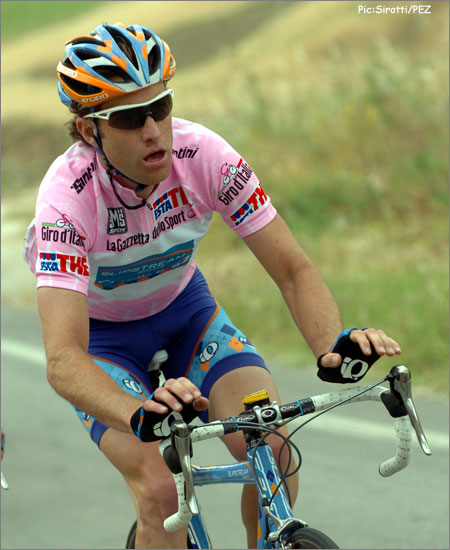 They fled descending the category 2 Gratteri climb, and rocketed out to a 10-minute advantage – which shrank back to under 7 minutes before ballooning out, like some Z-list celebrity binge eater, close to the original 10 minutes again. 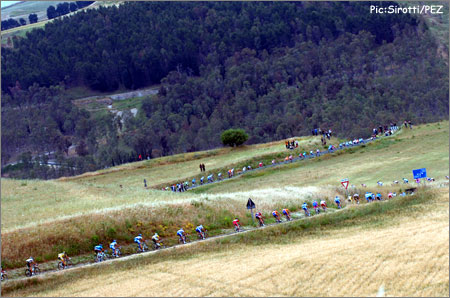 PEZ-man Jered picked out Emmanuele Sella as a name to watch in the Giro and this perennial animator was out nicking points for the green climber’s jersey, burgling a maximum haul on the Gratteri. He then pinched the leftovers on the category 3 Polizzello, behind the lead duo.

Loosli and Roy kept their heads down, but with Slipstream’s power chasing them down, and LPR Brakes lending a hand, they never stood any realistic chance of pulling off a shock. At 47kms to go, their adventure was over as the rain started to fall.

Also falling, sadly, was Dave Zabriskie. He unfortunately exits this year’s race on a stretcher, after a crash right at the head of the peloton at 50kms to go. The spill also felled Alberto Contador, but the favorite to win the Giro managed to get back up, and was right in the thick of things at the finish. 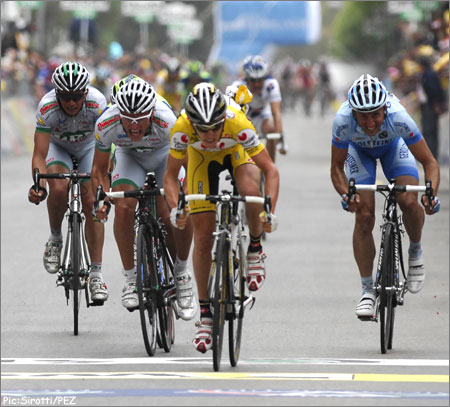 A finish, incidentally, where Luc Leblanc won the Worlds back in 1994, when Pez-man Al was driving the GB team car – in blistering heat, not good for a fair-skinned boy from not quite as boiling hot Scotland!

Things look a little more sprinter-friendly tomorrow with a flatter spin, back in the direction the riders came in today. There’s one mountain in the first 50kms, then its flat-out, strung-out, all-out …. all the way to the finale in Milazzo.

Keep it Pez as we wait on news of our intrepid leader’s latest adventure in Giro land, and we’ll also have all the ups, downs, rights and wrongs of the Giro’s opening weekend in Eurotrash tomorrow. Don’t touch that dial!