It’s not too terribly often that a break this early in a Grand Tour manages to go the distance, but it happened, and the finale was nothing short of spectacular as Tinkoff’s Pavel Brutt managed to wrest free of his breakmates after David Millar’s chain snapped just outside of the ultimo chilometro, just ahead of the ravaging field.

Indeed, it was a day that David Millar will rue for a long time to come, probably something akin to the Tour de France Prologue in Paris when he dropped his chain and lost by next to no time. Today, his bad luck struck whilst appearing to be the strongest in the group and biding his time to take the win, and just as he appeared set to maul his breakaway companions, the chain snapped, Brutt attacked, quickly got a gap and even when he crumbled in the waning meters, he had enough to go the distance and take the huge win for himself and his Tinkoff squad. 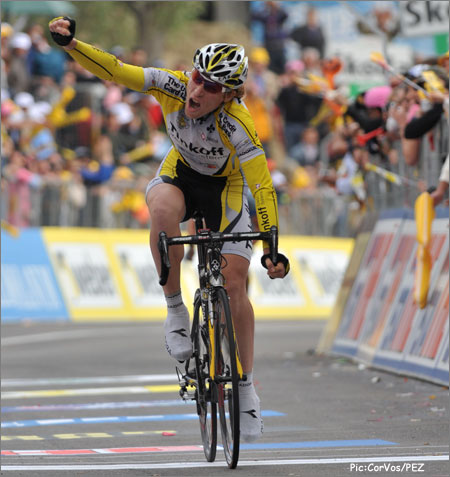 Behind the victorious Pavel Brutt, Johannes Froehlinger of Gerolsteiner followed in 2nd, then Luis Laverde (CSF), and then Francisco Perez. As for David Millar? He was too busy throwing his malfunctioning velocipede over the barriers to care. 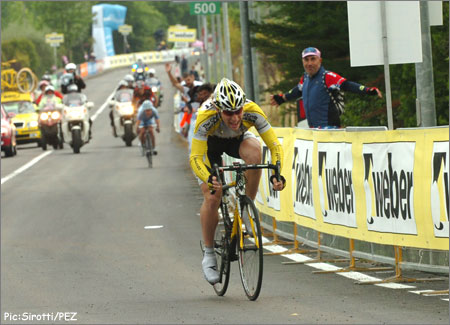 A little further back, only 31 seconds to be exact, Paolo Bettini proved the pundits right when they said that the finish was tailor made for the World Champ, unfortunately for Il Grillo, he wasn’t sprinting for the win, but rather 5th place. Still, a further encouraging sight to see as Bettini continues to regain form following his broken rib. 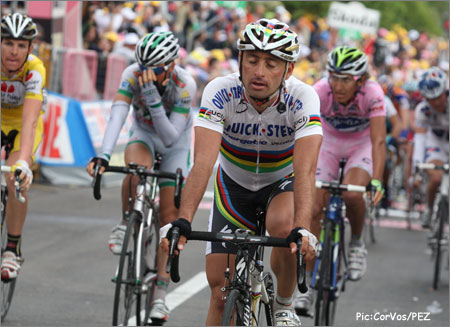 The Maglia Rosa did not change shoulders as many had predicted could be a possibility, and a possibility that Danilo Di Luca’s LPR Team was banking heavily on. Franco Pellizotti acquitted himself well in the finale and held on with no real issues. 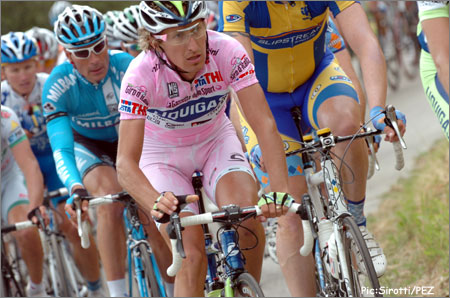 The Details
Yes, of course there was more to the race than the final kilometer. There were 202 other kilometers to be exact. Slipstream’s Magnus Backstedt made it very clear what his squad’s intentions were for the day when he attacked from Km 0. He didn’t ride away, but there was no doubting that a Slipper would be in the mix in the break of the day, and sure enough, when the break of the day set off on their long expedition in desperate search of stage glory, David Millar was safely tucked within the quintet of Pavel Brutt (Tinkoff), Johannes Froehlinger (Gerolsteiner), Luis Laverde (CSF), and Francisco Perez (Caisse). 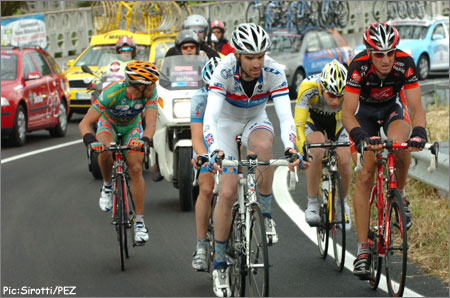 Behind, back in the safe confines of the field, Liquigas was content to let the break have a good time at the front, and the gap rose and rose and rose until it crowned at about 10 minutes-ish. Unfortunately for the hopeful Classics specialists in the field who had been licking their chops over the thought of the tough finale, the lead did not begin to drop as it should have. It came down, but much too slowly and much too late. 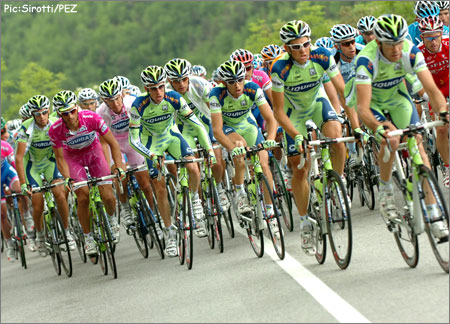 The much talked about finale? 3 km at an average of 5.8% and the last part to the line at 9%. Indeed, the likes of Di Luca, Bettini, Ricco, and Pellizotti all had thoughts of victory dancing in their wee little heads, but unfortunately it was not to be. With 4k to go, the lead was still well, well out of reach for the field and it was assured that the winner would come out of the fivesome.

For awhile, it looked like Caisse’s Francisco Perez would even nab the leader’s jersey, but the time gap dropped spectacularly fast in the waning kilometers as Johannes Froehlinger was the first to have a go for the glory out of the break. He was followed in quick succession with a nice counter from Perez. 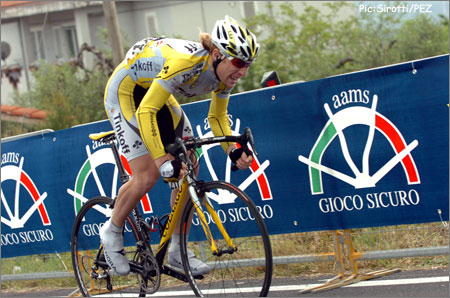 All the while, Millar looked sublime and more than capable of taking the win, especially considering that it was Pavel Brutt who was on the rivet leading into Millar’s untimely mechanical. Brutt summoned up some kind of special courage somewhere deep in his Russian gut and attacked as Millar’s chain made one more final revolution before falling to the ground.

Brutt had taken the sword and driven it through the chest of his opponents and jumped to a huge gap and even as he fell to pieces in the last few meters, his victory was secure. 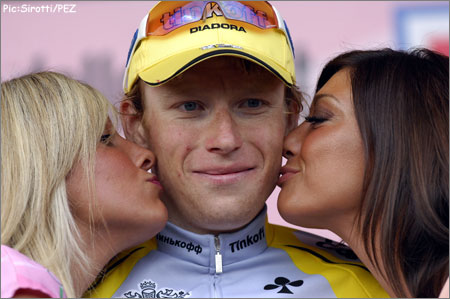