The 2008 Giro decided to do it’s first bit of muscle flexing, and the big boys showed themselves, at least in part. Some big names went off the business end of the race, and the first sparks began to fly with big names like Di Luca, Contador, Piepoli, and Ricco mixed in with some not-so-big names like Kiryienka, and the somewhat unlikely winner, LPR’s Gabriele Bosisio! Read on to find out how the upstart took the day!

New leader and national champion of Italy Giovani Visconti (Quick Step) lead the group out from Vasto in the pink jersey today. In a trek that began to point the nose of the race towards the mountains, this 180km exercise that took place in the middle of the boot of Italy was bound to reveal the first peeks at the contenders and the pretenders. With a tough course sprinkled with Cat 1 and Cat 3 climbs, and packing a 6% uphill finish facing the group, it was a near certainty the course suited a breakaway. And lo, so it was. 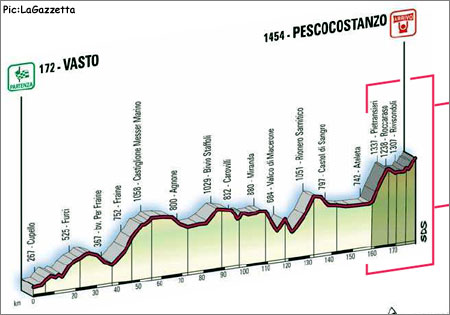 I can say lumpy, can you? 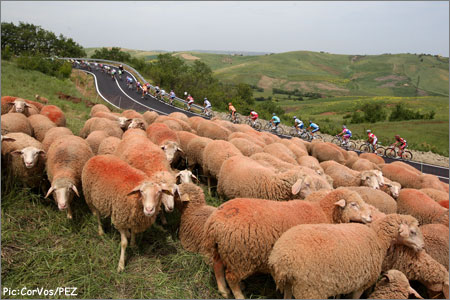 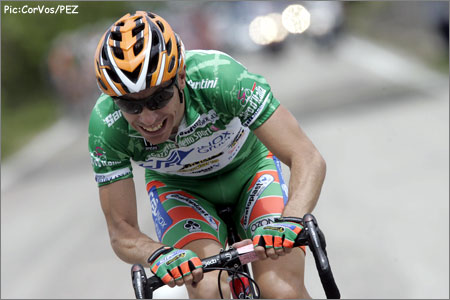 Emmanuele Sella was on the hunt for mountain points today, and he got ’em – he’s comfortably in Green for the moment.

After the first couple of bumps in the road, the winner of the 2008 Tour de Georgia, High Road’s Konstantin Sivstov, took a group of 4 off in pursuit of the leaders, as the leaders had over 5 minutes in hand over tha main bunch. 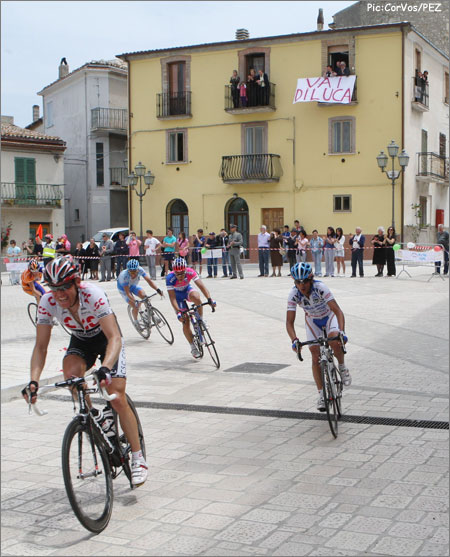 The racing was full-on all day today, even through the piazzas.

The young Belorussian must have gotten word that it would be wise to get as close to that leading group as the hills had proved that the break looked as though it stood a chance of staying away. Similar to his cheeky win on Brasstown Bald! 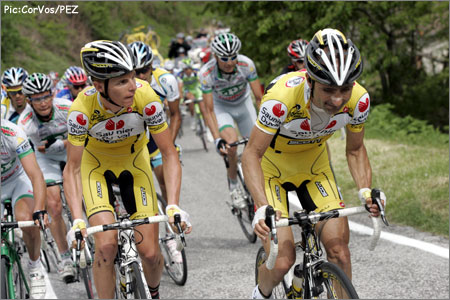 The ball-busting trio of Simoni/Piepoli/Ricco might now only be a duo of Piepoli and Ricco, but they sure seem to be doing ok.

Up front, Juan Horrach and Simon Spilak reverse attacked the breakway as the end neared. Then Baliani also took his leave of the breakway. Behind, the Killer’s team set a murderous place that the other favorites were keen to stay near. Kloden and Contador hung out near the front, biding time. Piepoli had a dig, which Di Luca took note off, and attacked hard. 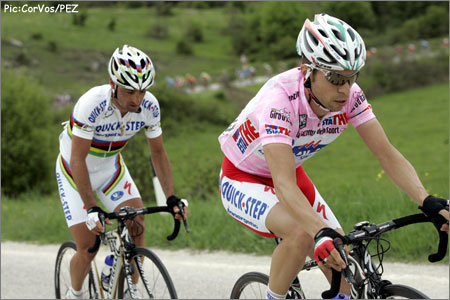 Visconti had a hard day at the office today, but he held on to his Rosa.

The Saunier Duval boys reeled that one in, and quickly put Mr. Di Luca in immediate pain. This fight was taking place a good 3 minutes behind our sneaky breakaway group. From the main group Kloden, Bruseghin, and Menchov made a concerted effort to getaway. They would be caught only to see Menchov dig again, but the LPR boys made short shrift of any further moves as they toed Di Luca to the best position possible for the finishing climb. 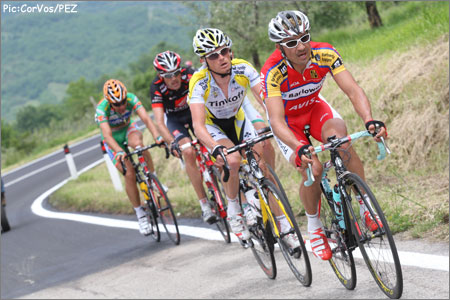 Up front, Sella threw a punch that didn’t get himself all the way gone from the break, but it did dump Cardenas out the back. Bosisio countered the Sella move and managed to gap the group. He watered it and slowly it grew. With 1k to go, Bosisio had the win in the bag, a very impressive performance from the relative newcomer. 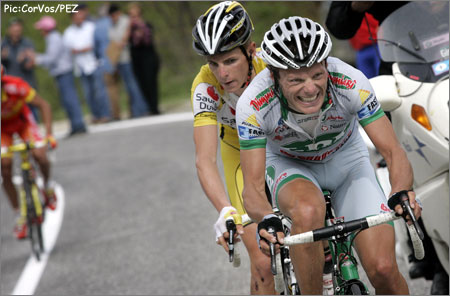 Di Luca was giving it some serious stick today, and he was rewarded with almost a minute over some of his biggest foes. 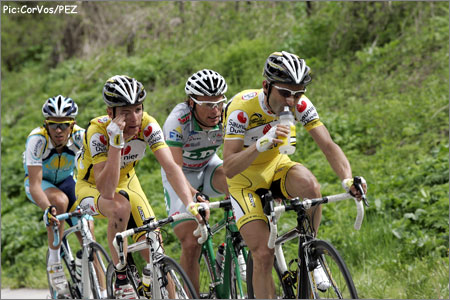 Ricco, Piepoli, Contador, and Di Luca…we’ll be seeing a fair bit more of this quartet for the next few weeks.

Behind, Di Luca was clearly out to take advantage of the uphill finish and stick a little bit of time into the other big names near the front. Contador, who had been tagged on to the front end all day, faltered and gave The Killer a few seconds. Danilo finished 5th behind the remnants of the breakaway, to show the rest of the group that he’s here and he means business. 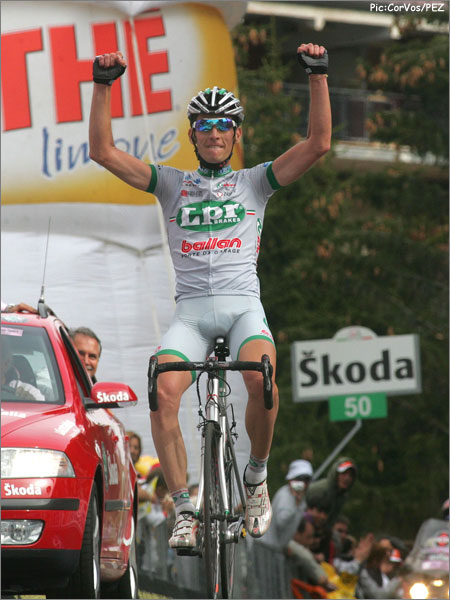 We’re just really getting started for this 2008 Giro, so stay tuned to PEZ for all the latest info!

Giro di Pez: To The Rooftop of Peschici!