Liquigas fastman Daniele Bennati is off for some face time on the Giro d’ Italia podium after edging Paolo Bettini and a surge of sprinters for the stage win. Today gave the seasoned race viewer everything they’d expect on a flat stage – long, brave breakaway; high speed pursuit and catch; frenetic sprint finish. How did it all go down? Like this…

Today did seem a little bit of a gift to the tired riders – a pretty much pancake flat roll along the coast with one category 3 climb just over 40kms from the line, and another bump about 9kms from home. All that with a rest day to look forward to tomorrow. 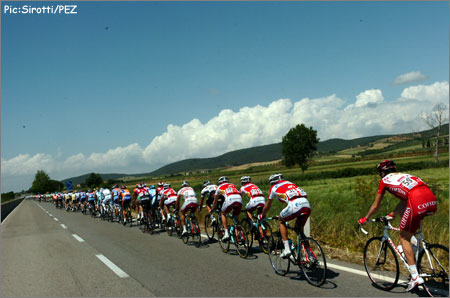 And in as much as you can ever have a day off in a Grand Tour, this was it. The peloton took a long, weary look at Ag2r’s Yuri Krivtsov legging it from the flag and let him go. Mickael Buffaz from Cofidis joined him a couple of minutes later, as the main field thought: “There goes another maniac…” 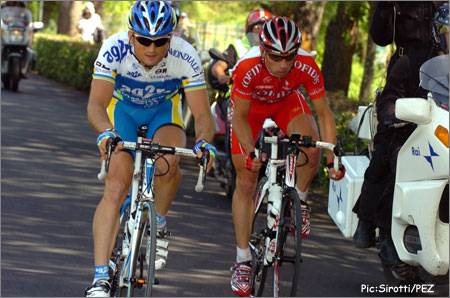 In less than an hour of riding they’d pulled away by nearly 11 minutes, with the main contenders reckoning on staying safe and out of sight until the sprinters’ teams decided to close things up for the big finish.

QuickStep were reasonably prominent doing some work to make sure Visconti stayed comfortable in his pink jersey, while Milram, Liquigas, Gerolsteiner and High Road were riding for Zabel, Bennati, Forster and Cavendish. 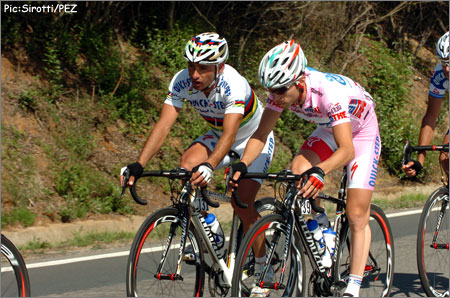 Things stayed pretty mellow until the only major climb of the day, and Emmanuele Sella noodled out of the peloton to snaffle the remaining points…long after today’s Butch ‘n’ Sundance impersonators had gone through.

Onto the finishing loops and we had a cameo from Bettini and Ricco off the front, along with Sella. When the bigger two of those names (arguable, I know) gave up, Sella kept going and caught Buffaz and Krivtsov. That little manoeuvre was short-lived and 10kms to go it was all together for the finale. 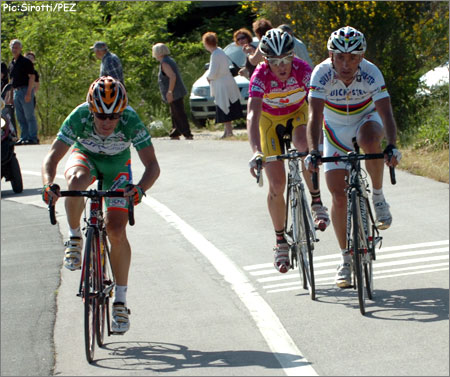 High Road started piling men to the front and were absolutely barrelling along, with the other usual suspects putting in an appearance – Milram, Liquigas, Lampre. Today, though, things didn’t go in favour of the Manx rocket Cavendish and he was washed away as Bennati surged through for the win.

Bettini came close, as did Robbie McEwen – the form is coming for the Aussie, but he might bail out of the Giro sooner rather than later to look at building for the Tour in July. Visconti stayed safely in the pink after avoiding yet more tumbles – one of which saw Cofidis rider Bingen Fernandez off in an ambulance. We wish him well. 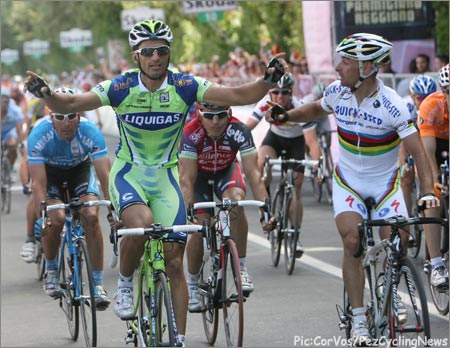 No racing tomorrow, but the action never stops here on Pez …….. Eurotrash will keep you bang up-to-date with both the behind the scenes rumour milling and the hard facts from week one of the Giro, and a whole lot more besides. Don’t touch that dial! 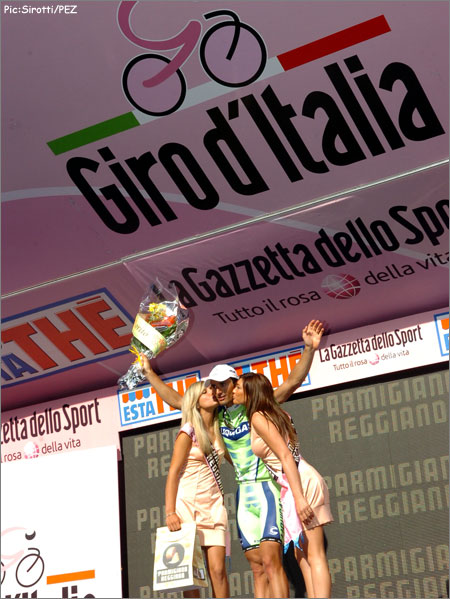