Let’s get to the point, no blithering about how Di Luca might repeat or perhaps Simoni for a farewell win or Ricco for the prodigal victory – this upcoming Giro d’Italia will be headlined and won by a rider from Astana.

Of course, I’m going to blather on about the supposed infinite number of possibilities for a winner in Milano at the beginning of June, but the late addition of Astana with their A-Team will put paid to probably all of these chances.

Danilo Di Luca won the Giro last year. Danilo Di Luca is an amazing bike racer, no questions, but he is not, will never be, has absolutely no chance at Le Tour. The riders who animate the overall at the Tour de France are the absolute best and the riders who finish on the podium are among the top three in existence and then the a rider who WINS the Tour? Arguably the best in the game. The thing with Astana? Their three-headed hydra of Contador, Kloeden, and Leipheimer – podiums galore and the defending Tour de France champion in Alberto Contador. So when I look at the favorites list and try and come up with my top three…they all seem to be wearing the same kit. 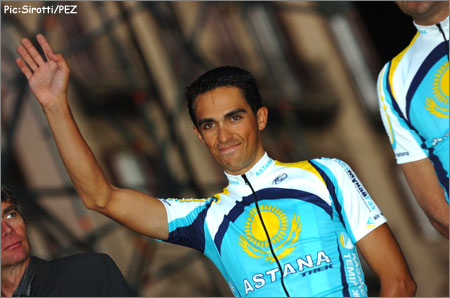 One other point to further underline my point about Tour de France winners and Giro winners: remember 2006 when Ivan Basso embarrassed everyone? He may or may not have been on the sauce to the extreme, but he was the Tour winner waiting to happen – he was the best, and the best versus what the Giro had to offer was not even a contest. Basso literally rode Simoni off his wheel on a false flat AFTER the Mortirolo – he did not attack him. I see the same thing happening this month in Italy, the only difference being Astana has three potential Tour winners, and in this case, Giro winners.

There is a small problem with my rationale though: it’s not July. Basso prepared for the Giro/Tour double. He was hellbent on it. Astana, it seems, had no idea this was coming, and now Contador has been summoned from the beach, Leipheimer got a late flight, and Kloeden is licking his chops with fine form. They’re not going to be at 100%, that’s for sure, but this triumvirate at 90% is still wicked formidable. 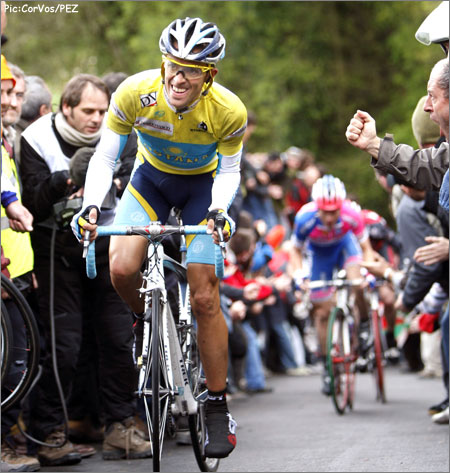 I don’t care what this recent news of Alberto Contador’s lack of preparation for the Giro has been, something about a surgery, something about easy rides and off days, bla bla bla, he already has two big stage race wins under his belt for 2008 (Castilla Leon, Basque Country), and he is the TOUR champion – he can climb with absolutely anybody – yes that includes you Leonardo Piepoli, and his time trialing is wicked fast now. This course was designed for Alberto Contador. 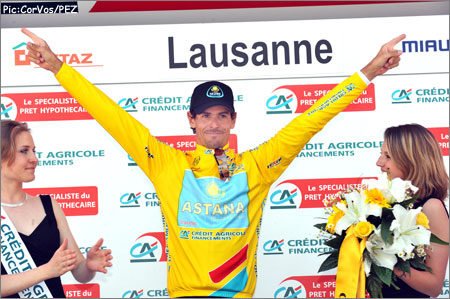 Andreas Kloeden had a quiet season filled with injury and doubt until last week when he won the Tour de Romandie during which the announcement was made that Astana was going to get a surprise invite and thus became the prohibitive favorite at the Giro. Quite a week for the podium finisher at Le Tour. Kloeden isn’t quite the natural sherpa that Contador is, but he’s damn fast uphill, and his time trialing puts him in a very select group against anybody. 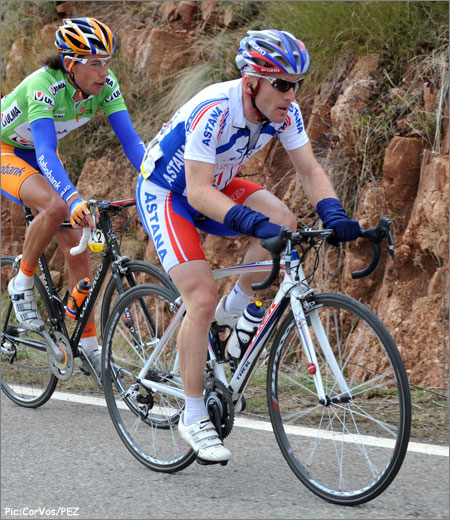 Then there’s Levi Leipheimer. The American National Champ couldn’t defend his Tour de Georgia overall victory, but that’s really only because he was robbed of a longish time trial, which would have gift wrapped him the win. He was fantastic at California earlier this year, and the chance to really romp in the mountains coupled with some decent time trialing has to make Mr. Leipheimer a very happy man. 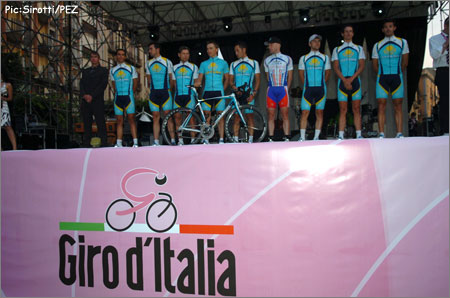 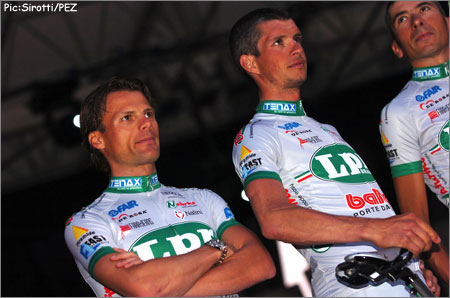 Danilo Di Luca has had a turbulent lead up to the Giro highlighted by a grand battle with the folks at CONI. That appears to be resolved and now it’s on to the task of defending his huge win from last year, you remember, right? That big Giro overall that nobody thought he could win? Well, this year I really don’t think he can. Call me a naysayer. He’ll be good, he’ll be top 5, and he’ll win a stage or two, but I just don’t see it. 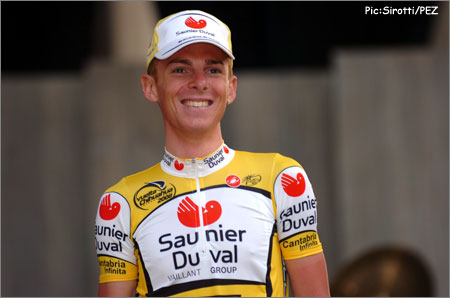 Riccardo Ricco has been damn near silent this Spring. He rode the Ardennes Classics in absolute anonymity, and pretty much everything else before that. Methinks Mr. Ricco has been working hard on preparing for the Giro. I think Ricco will be a force. If he comes to the Giro absolutely flying, maybe he could put a spanner in the works of the Astana Juggernaut. Maybe. 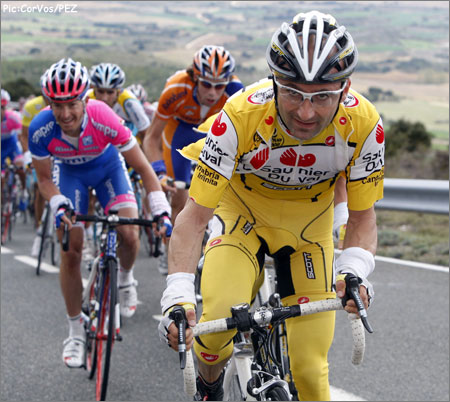 He does have that happy little man, Leonardo Piepoli, at his disposal. Piepoli has to be licking his chops at this year’s Giro profile. It must really be nice to weigh a Twinkie over 100 pounds. 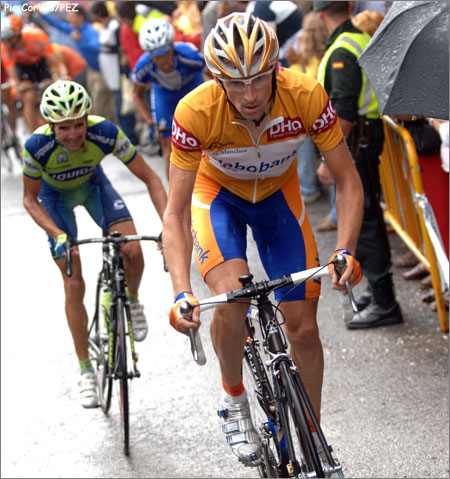 For my final choice on my second rung of favorites, I’m going with a Grand Tour proven rider – two Vueltas to his name – Denis Menchov. Menchov is 100% focusing on the Tour, because his team is actually invited, but word has it that he’s going a-ok. It’s never terribly easy to get a bead on the quiet Russian, but one would assume he’s here to play for real. He has proven that he can do battle in the toughest mountains (Spain anyone?) and he can TT. 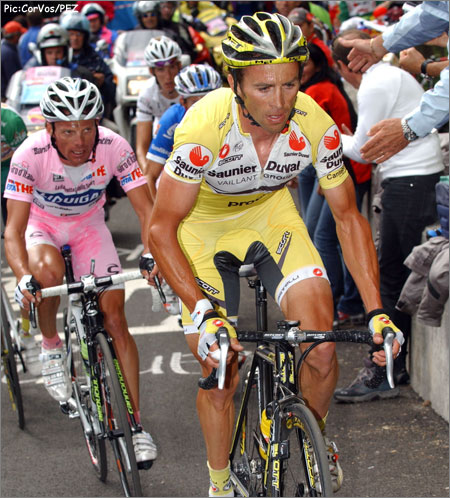 I love Gilberto Simoni. I love his style, I love his boorishness, I love that he’s old, but he will not win his third Giro. That’s all. He will probably win some big stage, probably to Alpe de Pampeago, but he will not win. I think 5th is a good prediction for Gibo…and hopefully some good preparation for his Olympic mountain biking bid. 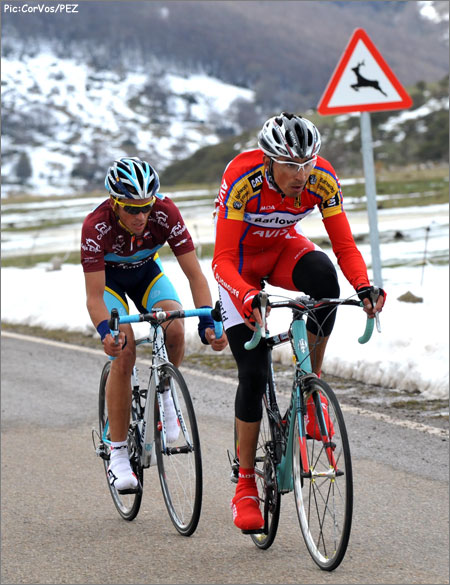 I think the Barloworld combo of Mauricio Soler and Christian Pfannberger will do some good in the mountains of Italy this month. Both are proven sherpas – Soler was of course the King of the Mountains at Le Tour in 2007 and Pfannberger has never found a German speaking mountain he didn’t love – the Plan de Corones, er Kronplatz, is in that nice little German speaking corner of Italy… 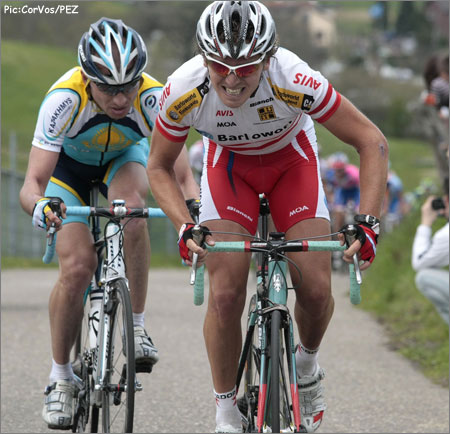 Christian Pfannberger just finished up a dream run in the Ardennes… 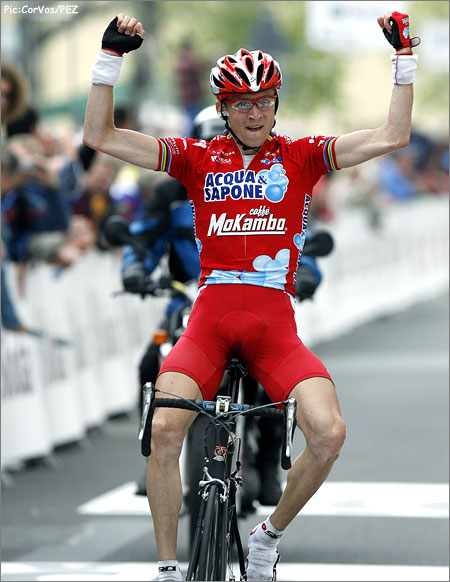 Konstantsin Siutsou, the former U23 World Champ, is fresh off overall victory at the Tour de Georgia and should be allowed a long leash to pursue his own goals at the Giro within the High Road team. He could surprise. I wouldn’t imagine anything jaw dropping like a Cunego win in 2004, but perhaps along the lines of Ricco in 2007…maybe. 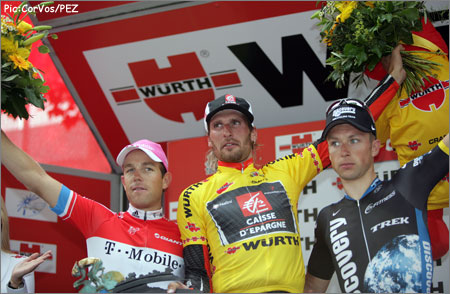 He’s the man for Caisse D’Epargne. He’s still coming into his own, but I think we should see a good Karpets. I have nothing to back that up whatsoever. I’m just making that up, because I know nothing of Karpets’s form at the moment. Sometimes I just go with the muse and the muse told me: watch Karpets. I’m just reporting on the voices in my head. 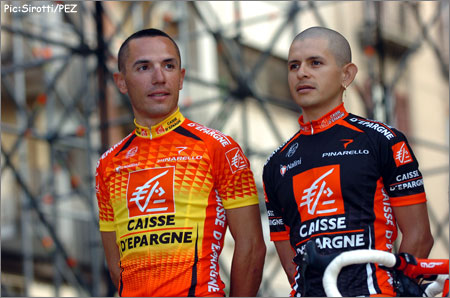 Joaquim Rodriguez and Jose Rujano will look good with Karpets to lead the Caisse D’Epargne team. Rodriguez has great form right now and Rujano is really overrated. Of course he’s talented, but I’m pretty tired of citing that amazing performance of his from three years ago. If he doesn’t put up this go around, I hope he goes away. Ok, that’s pretty harsh, he’s still really young, but come on dude, we want to see something, give us a stage, maybe a whole three weeks, but SOMETHING. 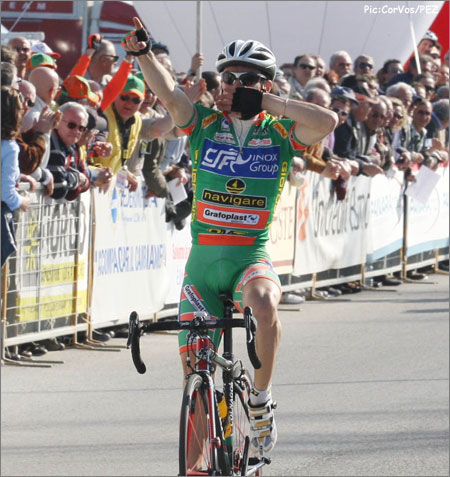 Emmanuele Sella is a damn fine bike racer. He continually stays just under the radar over stardom, but that shouldn’t be too much longer. His time is coming… 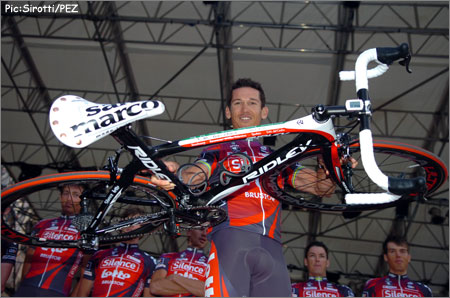 There will be a few sprints this year, emphasis on FEW. Robbie McEwen will sprint against Mark Cavendish and Daniele Bennati and they will decide the sprints amongst themselves. How does that sound? 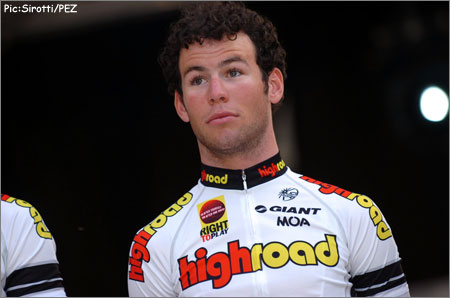 The 1990 Giro With Frankie Andreu