Is it the Giro of the century or the Giro of the revolution? Giro boss Zomegnan prefers to call it a restart. After one hundred years it’s time to start again. With something new; something spectacular. PEZ’s Ale Federico gives his always unique take on his beloved home Tour.

When last October the RCS announced the Presentazione in Venice I was very happy. What a nice chance to make a walk around the most beautiful city in the world, waiting for the Giro presentation! I was tired of the grey Milan; so I started to like the Giro 2009 months before the Presentazione. 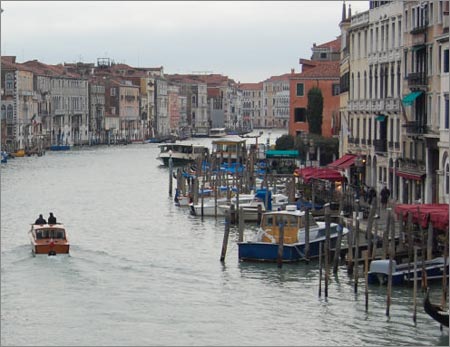 Venice is so unique, so different from any other place. This is not a town. It’s a sort of vision, a “dйjа-veux”. And every time it’s a first one. Venice keeps you away from the reality. 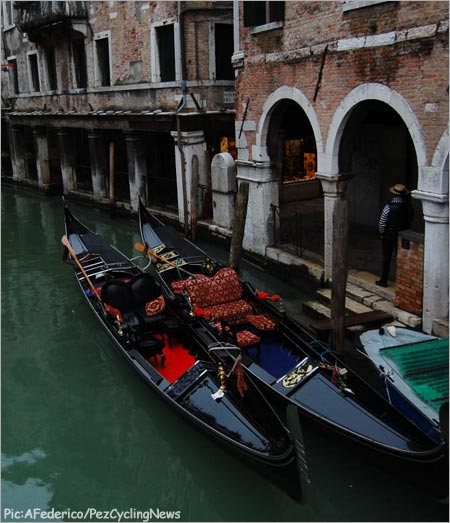 It’s not easy find the Teatro La Fenice, in a labyrinth of small roads and water. It’s a grey day just before Christmas and it’s starting rain. When you’re in Venice you’ve just two chances; to follow the indications to San Marco, the famous Venice square, or to Rialto, the magical bridge on the Canal Grande. It’s hard to go somewhere without these indications because you could take a road that ends up in the water. 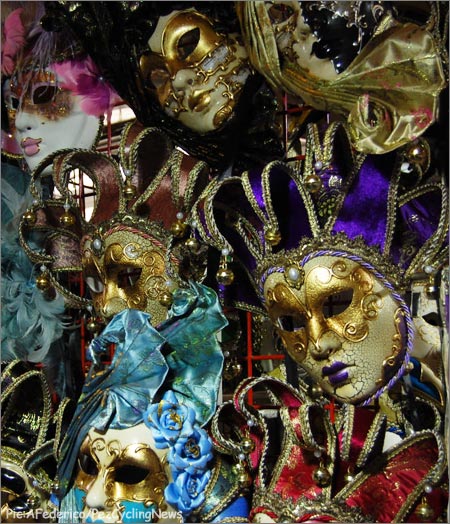 Therefore is a long way of tourists coming from all over the world. You can love Venice, and you can hate her at the same time. While you walk surrounded by stands with masks, restaurants and shops, you understand that this city has lost her soul, following the easy money of the tourism. Here you can find a mix of Italian clichйs. Pizza, carnival, gondolas (with singing “gondoliere” included), spaghetti and Murano glassware. Here you’ll find everything mixed all together. 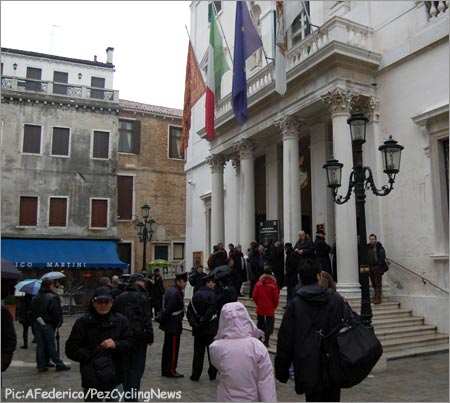 But Venice is also the lonely corners on the green water, the stream and the wind blowing through the narrow passages. Venice is hundreds of languages at the bar. It’s the foggy and magic carnival town and the sunny hot queues to visit a church during the summer vacations; it’s the 24Ђ for a car park and the 200Ђ for a hour on the gondola with your sweetie. 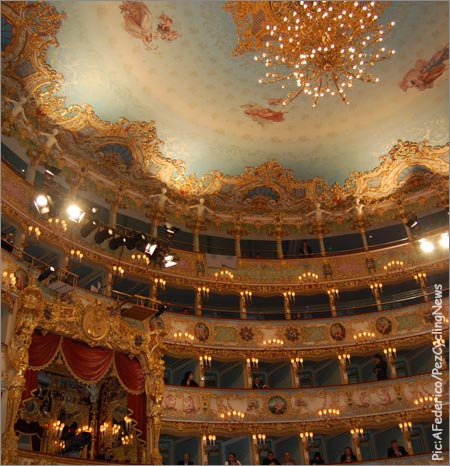 It’s a fast touch of Italian life, very far from the Italy. Another world transformed for people that want a taste of Italy. But it’s magic. Venice has been a strong, marine Republic since the nineteenth century and her people travelled all over the world importing different styles and cultures. Nowadays all the world is coming back here to return the visit! 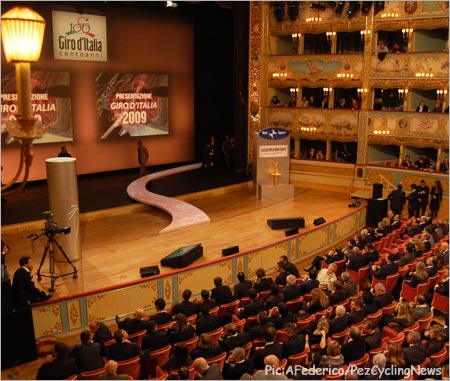 The Teatro La Fenice is hidden not far from San Marco square. Ten years ago it was destroyed completely by the fire. It was a disaster. But famous is the Venetians’ pride. “How it was, where it was” – “Com’era, dov’era” they told of their famous bell tower when it collapsed in 1903. They did the same with their theatre. And really, when you arrive inside this place you understand why they cannot accept to loose it. It’s breathtaking. How can be born a bad Giro from here?

I arrive quite late, but the riders are not yet come. One of the first is Petacchi. He always looks angry. He maybe is just worried or shy. Bettini, even though retired, sits with all the other riders in the first row. But the great news is that he will chase the Giro 2009 from the motorcycle for the Italia television as race commentator. Who better than a rider comment on the race from… the race? 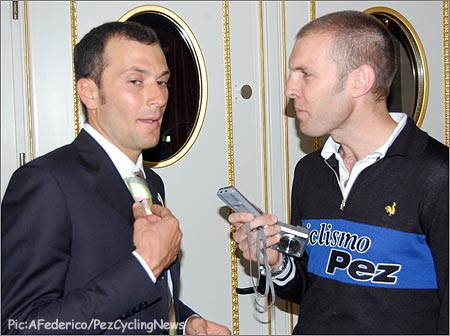 Basso is all the time surrounded by journalists and photo-reporters. Our Matt had the chance to talk for a while with him and he did it in English! Basso was understanding fine (Matt was talking quite fast – maybe he was nervous) but Basso was replying accordingly. Cool.

On the other side Pellizzotti with his blonde hairs was looking happy and quiet. He’s a nice guy, always ready to answer to the same questions.

It’s very hard to make an original question during the Presentazione; which is your favourite stage? What do you think about the route? Which is the hardest climb? So, you the same answers to the same questions. 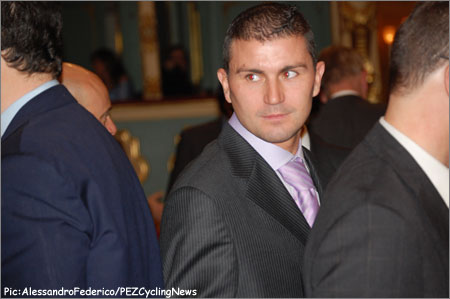 Bruseghin was staying quite apart, Visconti was one of the most elegant with a couple of very intellectual looking glasses. 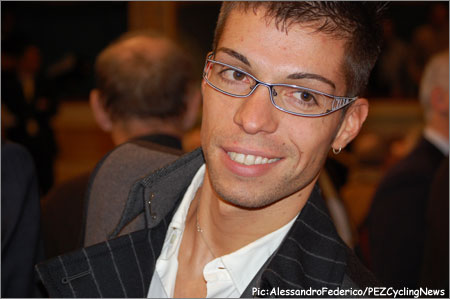 The show flowed quickly. Images from the hundreds editions. Special clips about the most famous Italian riders and few images of the most important stages of the next edition. All the riders agree, it’s a revolution. First of all it’s an “upside down” Giro starting from the north and finishing in the south. But especially the Dolomites proposed in the first week of the race give a touch of the unexpected and unpredictable. How to be prepared for that and resist for another two weeks at the top of the form? 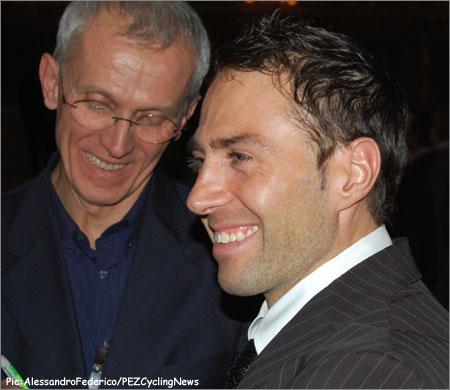 Only Simoni is quite relaxed. He loves so much the Rosa jersey that he’s already thinking about the next edition. It’s the end. And the end it’s a rush. People running away for the last train, and for the last boat. Going out of the theatre you jump back into the dark winter of Venice. Again tourists, shops and smell of food. Out of there nobody cares about the Giro. For me has started another dream, again.

• We’ve got lots more to come on this Giro – so keep it dialed to PEZ all week.