Giro Di PEZ: A Hot May Day In Romagna

PEZ’s favorite Italian on the scene, Ale Federico, is out and about on his home roads covering Italy’s biggest race. He takes us in on the bubbling inter-Italian feuds, and then goes right to the middle of the hot action from Sunday’s aggressive racing. Read on!

Warm, warm, and warm. My second day (of three) to the Giro 2009 has been very hard but, at the end, I witnessed one of the best races I’ve ever seen. Sometimes you’ve to pay your dues before you are satisfied! The stage is short, and I have time to get to Forlм for the race departure. I take a fast look at the websites to learn something more about yesterday. It’s seven o’clock and my wife and my daughter are sleeping. I love to wake up before them and get some minutes just for me. Once I’ve caught up on the news, I get moving, prepare the coffee, and everybody wakes up. So we move all together to Forlм in a warm beautiful morning, while on the beach in front of my house tourists are tasting the early summer.

Today the Giro makes a big turn on the Romagna Appenines, crossing vineyards and orchards. Forgotten roads not larger then two meters, remote villages, and a lot of sun; this is the menu of the day for the riders. The departure village is today located in the centre of Forlм, a small city in the Romagna plain, not too far from Bologna. I give a call to Pez; I left him yesterday night in a restaurant while he was eating carpaccio. He was already enjoying the life after a week of Giro, but I couldn’t follow the day’s stage until the end because my Giro was just getting started. No chance to have him along today – next year, dear Richard, it’s always a pleasure. 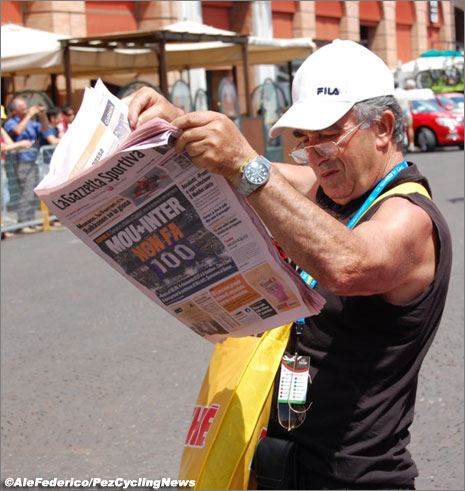 Catching up on the latest polemics.

The big square (the same of last year) is crowded. It’s Sunday but the people are here, to watch the riders and to have a taste of the most important Italian race of the year. It’s warm and you’ll read many times this word in this story. The riders delay as much as possible before they get moving. They sit in their air conditioned motor-homes, where it’s really much better, especially if you have to ride all day on a bike. But the people wait and wait. 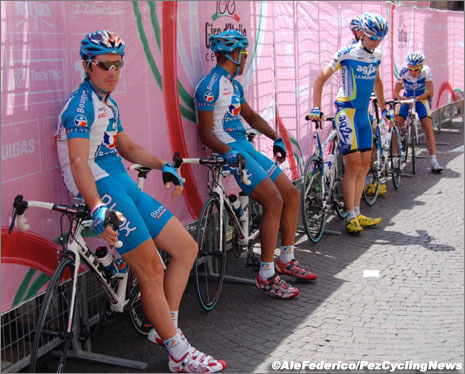 They don’t listen to reason, and move to the shade – there isn’t a single shadow in the big square. When the riders come it’s funny to see how they try to get a small comfort while waiting. The story of the day is the quarrelling taking place between LPR and Liquigas concerning yesterday’s tactics. LPR worked the whole day obtaining nothing, but Liquigas didn’t move, despite the strong rides from Pellizotti and Basso. It’s enough to make the souls agitated especially with this warm weather.

LPR’s Spezialetti notes – “We have already won four stages, but we’re here also to build a good show. I don’t understand why Liquigas is sitting on our wheels, they’re doing nothing in this Giro.” 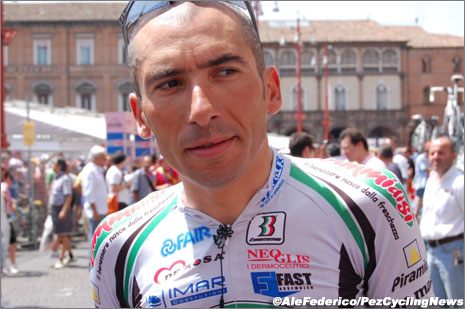 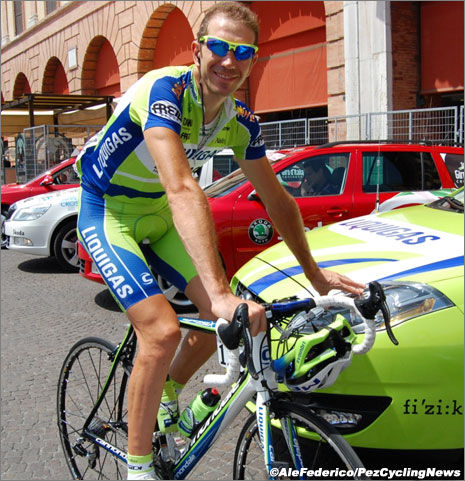 A typical conflict between the Italians…Menchov will be laughing all the way to Roma.

Velo retorts – “LPR spent a lot of energy for nothing. We are not crazy, yesterday’s stage wasn’t “red marked” and there was no reason for us to close on the breakaway.” 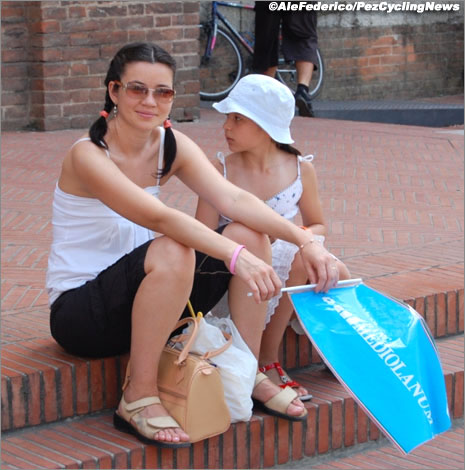 Giro, what Giro? The caravan is much better.

It’s one o’clock in the afternoon when the Giro leaves Forlм. The sun is high, and we move towards the Colle Casale: the third climb of the day. I choose this climb because I remember that on this same road Simoni attacked Garzelli in the Giro 2003. In Faenza he took the Maglia Rosa and won. So, why not today? It should be a nice place. The place is nice submerged in the gorgeous region of the flowers and we find, at three kilometres from the top a nice group inviting us to drink with them.
When they say “drink”, they mean wine of course and, in particular, the San Giovese – a local red. 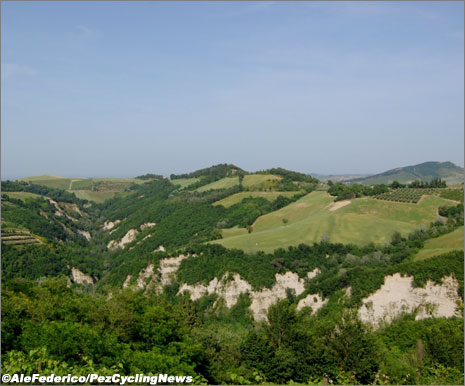 They’re Montaguti fans. Who is Montaguti? I admit that I didn’t know about him. A lady kindly hands me the wine: “I’m the mother, he’s riding in Di Luca’s team. Today, he is in the break.” – Yes, the break: again brave souls attacked early hoping to arrive at the end. Just a few of them will be able to go the distance, but Montaguti couldn’t be part of them in front of his people. – “We live here, just a few kilometres away. These roads are the every day bread of my son.” 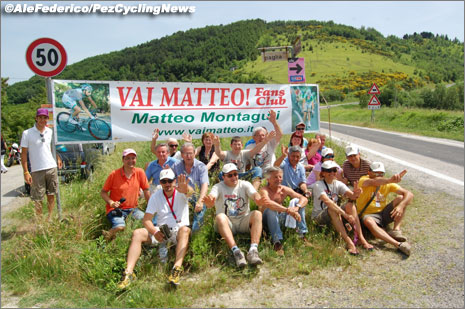 Montaguti’s fans. He is the man of this valley.

It’s warm. I can’t stop to write as I couldn’t stop sweating. My wife and my daughter leave me on the road – “You’re crazy” – and lay down under a cherry tree in a vineyard. But I’m already kept by my Giro mania and I can’t stop roving around looking for a good shot. Maybe that bend, maybe the other one. That landscape is nice! Over there I can see the valley where they come from. Brisighella, the village down below and the road climbing the hills. I can here the helicopter. Stop. 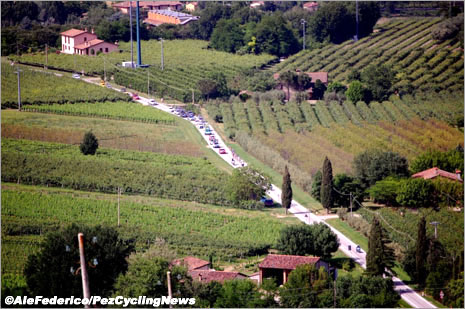 I would like to stop this moment and keep it strong at me for a while. That is the best moment of the race. Of the day. This is the reason I come here and I will be back on the road tomorrow. If you stop in this moment you can see something more around you. It’s not just a countryside anymore, it’s not just a road anymore; it’s something more. It is something I have dreamt about for a long time. I started dreaming about this day the same moment they told me the Giro was coming here. I imagined this moment many times during the long winter. It’s now silly to investigate whether the moment is living up to my winter dreams. But the scene is now ready; you can feel the excitement of the people. Someone crosses the road, as this could change completely his point of view. Someone else jumps like a boy. Another is already signalling to the helicopter. I will never fully understand our sport of cycling. Now half of me would like to be under the tree with my family but the other half is sticking me here and I just can’t answer why. 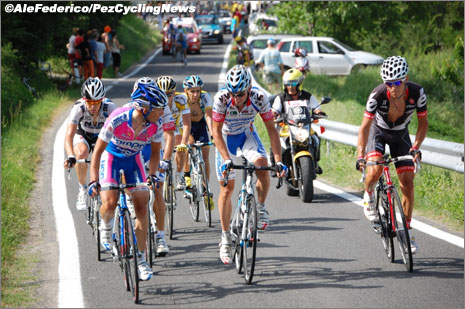 The hard working break with Bertagnolli front and center.

Down below the break. The magic moment is overcome. I can fully concentrate on the race. The riders are suffering. The break gives me the idea that they’ve no more power. After a while it is time for the bunch. But not: it’s Basso and Garzelli coming fast. I can’t believe my eyes. I didn’t think such big move would go. A few seconds later and here comes the Rosa group. But Menchov is quietly sitting on Di Luca wheel while Spezialetti is working hard for his leader. 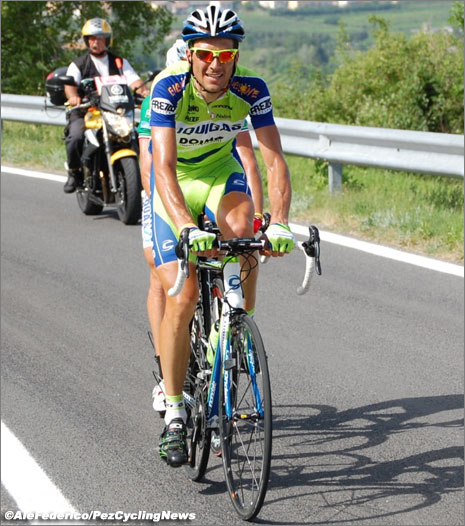 It’s the same story of the Italians: always fighting each other. This happens when none of them is clearly above the other. Tomorrow the newspaper will be full of poison from both sides. But this is Italy, the land of discussions and never ending disputes. I’m still thinking to these while I reach wife and daughter. I still have a thread of voice for the emotion – “Did you see Basso?” – “Basso? Who’s Basso? We were too busy looking to the helicopter moving our arms. Do you think we can see each other on the TV?” 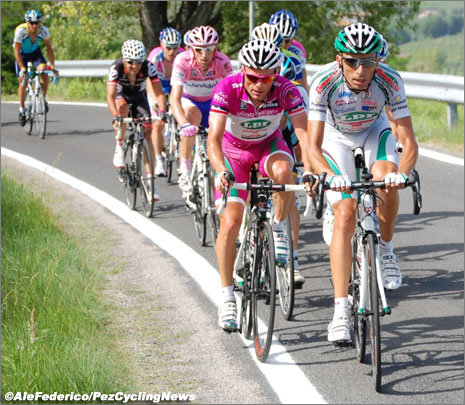 Thanks for your patience and do stay one day more with me. Tomorrow is the day of the roads I know, just beside my town. It should be a grand finish on the Monte Petrano. Ciao.

PS: By the way some Pez guys saw me on television during the Basso attack. I suggested to both wife and daughter that next time they shouldn’t waste their time with the helicopter.