Roadside St.17: Only four men have won here, Eddy Merckx in 1967, Franco Bitossi in 1968, Jose Manuel Fuente in 1972 and Moreno Argentin in 1984. Respectively, the greatest cyclist ever; one of the finest classics riders of his generation; a genuine climbing legend and one of the kings of the Ardennes classics. The winner here, today will be no ordinary rider and he just may win the Giro too.

Blockhaus is hardly an Italian name; it comes from the fort that made this climb in the Abruzzo region of the Apennine mountains a key element in the German defences here in World War 2. Will we see a desperate attack and defence today?

The big, solid, stoic Russian, Menchov resisting that small, indomitable, aggressive and passionate man Di Luca, who originates from Pescara, which sits on the Adriatic, virtually in the shadow of the mountain? At around 17:30, we’ll know. 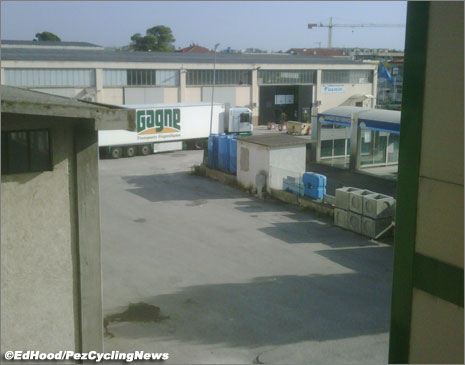 Pez spent the night in a truckers motel, with salt water coming out of the bathroom taps – ah, the glamour of it all! 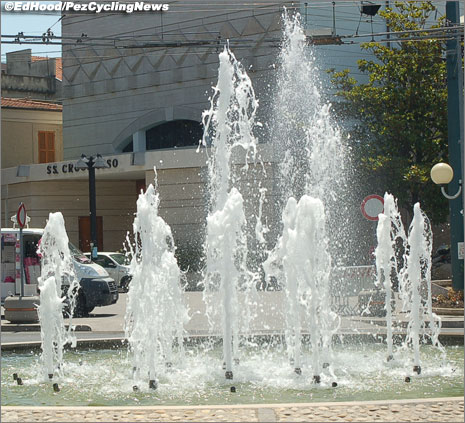 The day dawned hot – 32 degrees – and we made our to the depart in the hill top town of Chieti kilometre zero is back down in the valley with the opening kilometres pan flat past endless bland shopping malls, apartment buildings, industrial estates and the Aeropuerto D’Abruzzo. 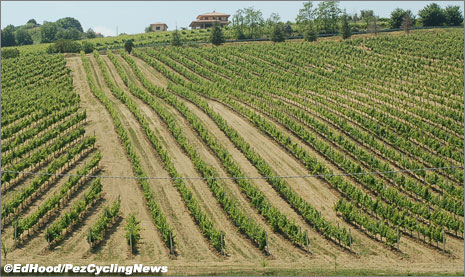 A road sign points to Pescara, just to remind us that this really is Di Luca’s patch. Eventually we quit the coastal strip and head inland through hills striped with rows of vines, the first ‘bumps’ are at Miglianico (32 K & 128 metres altitude) then Villamagna (41 K & 245 m) where the graffiti artists are hard at work. We’re surprised that it’s so quiet, if this was the Tour the multitudes would be picnicking already. 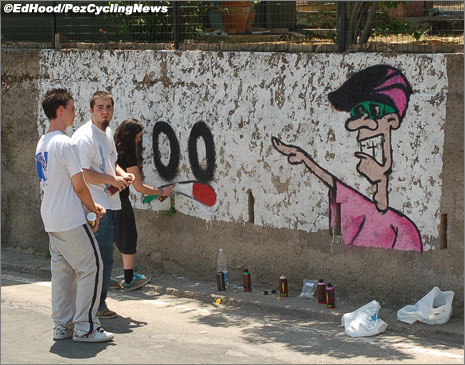 At 35 K to go, we see it; snow capped, huge, waiting. Apart from one little dip, it’s uphill from here to the finish. 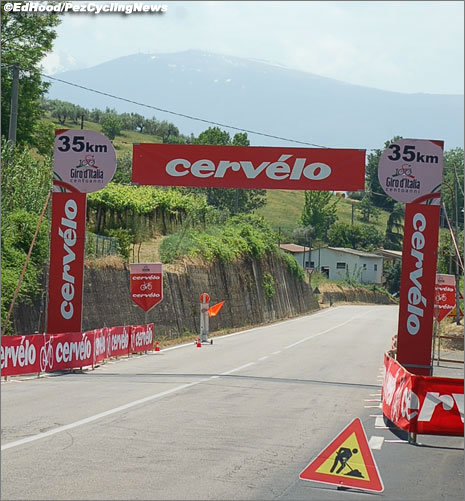 Banners for the three local heroes -Di Luca, Masciarelli and Cataldo – are everywhere. 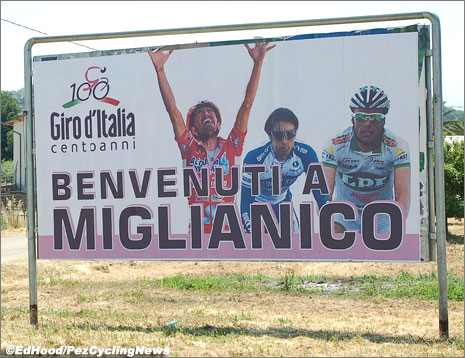 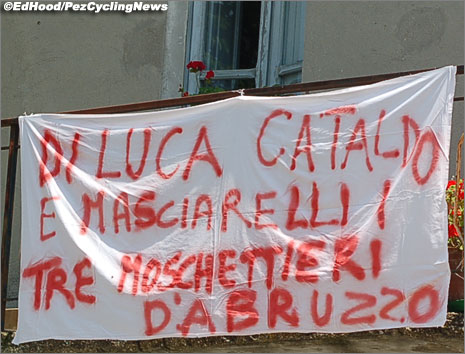 There’s 30 K then 25 and the trend is up, up, up through the trees and sleepy villages, not savage but definitely grappling with gravity. 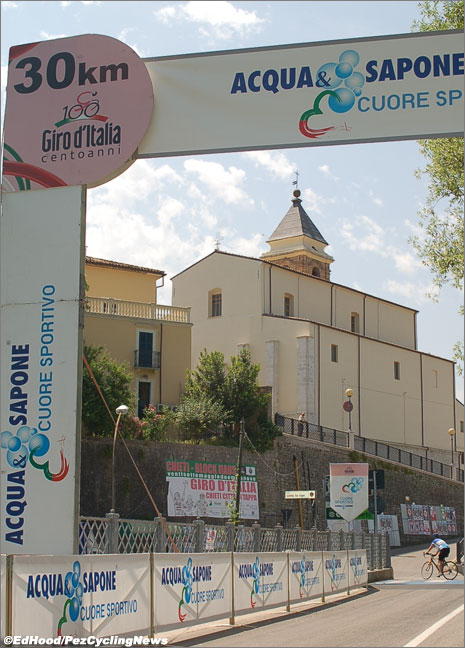 Around 60 K out and we’re on that ‘dip’ I was talking about, not steep or technical as we drop through 20 K to go; this will give a little respite – but not for long. Now it’s for real – 18 K to the top with nowhere to hide; try to find the rhythm and hope that it’s good enough. 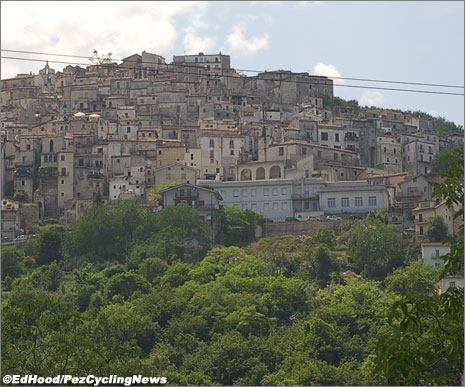 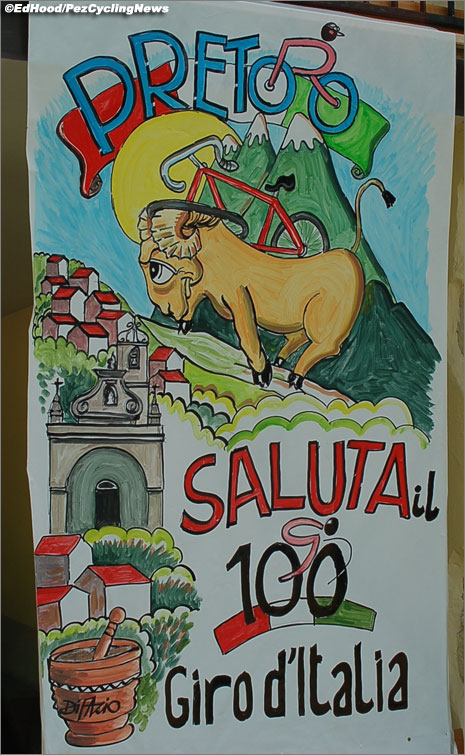 The village of Pretoro, with its hairpins is at 15 K to go and we’re beginning to understand why this climb is so feared, as Dave has to reach for first gear and the little Peugeot protests. Ramp follows hairpin follows ramp as the club guys wheeze and lever their way up. 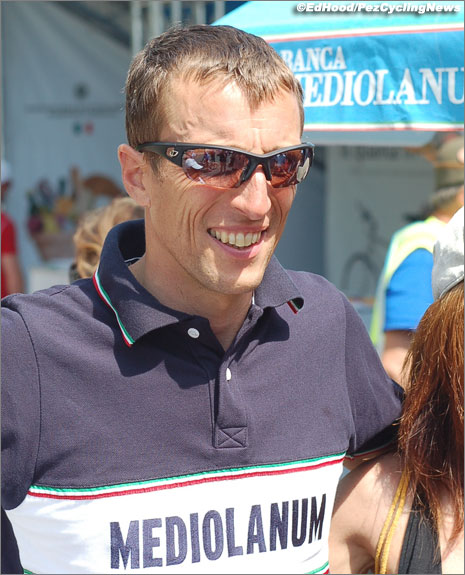 It’s cool among the trees – 22degrees, at least that’s some help – as the kilometres count down and the grade drags ever upwards. Passo Lanciano, 5 K and the hot dog stands are doing good biz; I’m not sure about the guy selling the Gerolsteiner kit, though. We spy 1988 world champion, Maurizio Fondriest, he looks slim, fit. 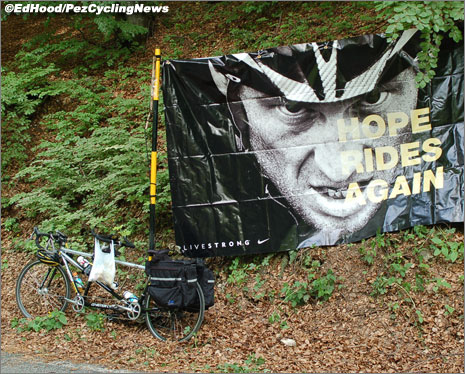 Lance eyeballs me at 4 k, that’s scary, “let’s go, Dave!” The tree canopy is thick here, shelter from the sun and the breeze At 3 K there’s a picnic around the TV; “Killer OK!” they shout. 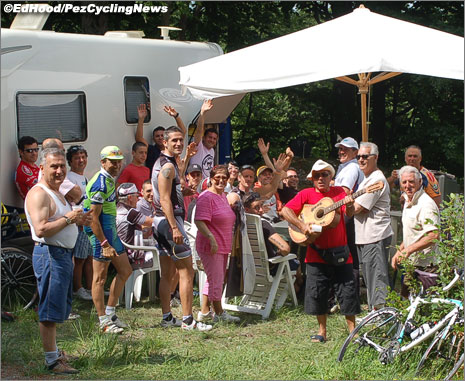 The trees are thinning now at 2 K and those 100 metre count down signs must be really encouraging, if you’re on your knees. 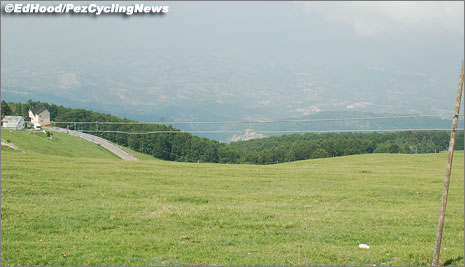 The heat haze makes it hard to see the view, but through the mist it’s like looking at a relief map. There’s a stiff breeze up here, cross to tail on the finish straight. 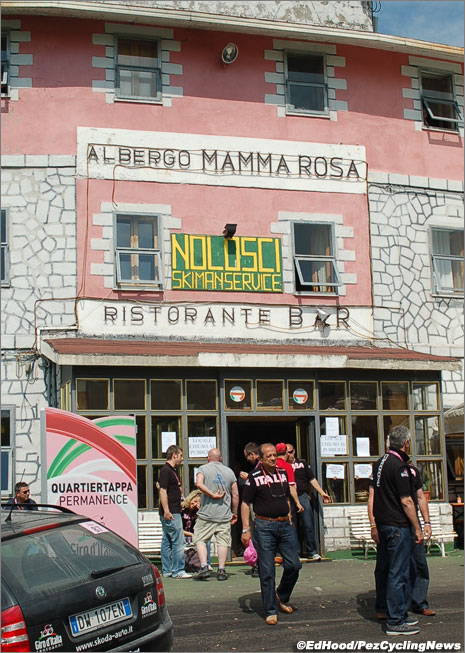 We abandon the car, set up the lap top in the Hotel Mamma Rosa, which is the press room for the day and head out, into the throng. 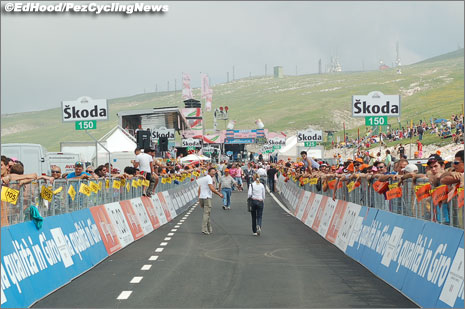 The magic creds let us onto the finish; the last 150 are straight and steep, wind assisted.

Katie Perry blasts; “You’re hot and you’re cold . . ” and it really is, baking when he sun peaks from behind the clouds, cool when it disappears and the breeze has it’s way. 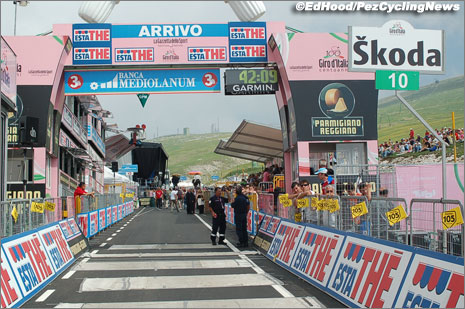 The finish straight adverts and the line itself remain covered up until just before the arrival – to keep them nice and fresh for the cameras.

There’s the photo finish camera, it’s unlikely it will be worked hard today. 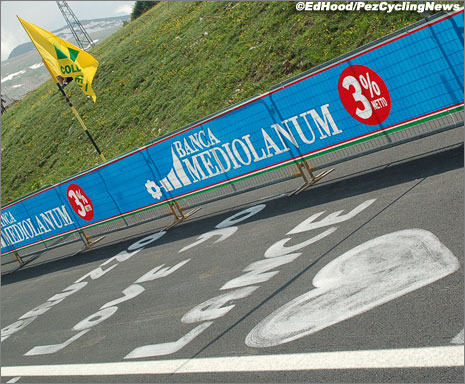 Just a little further down, the pavement artists have proclaimed their love for Lance.

The crowd is building and Danilo Di Luca, aka “The Killer” is the man they all want to win.

Pez eschews the press room monitors and sets up shop in front of the big screen; we want the smells, the noise, the elbows in the ribs, the breeze on our face.

There’s a break, three minutes clear, Galicia, Barloworld, Lampre, Quickstep, ISD – if they can’t have stage wins then they must get TV time.

Behind, Danilo’s troops line it out; death or glory today, his men will ride ’til they drop, then it’s down to the man in ciclamino. Even Petacchi is in the fight; he drops back to the car then hammers back to the front with supplies for his comrades. Can the Abruzzo fox break the Russian bear?

We’ll know in about an hour.

Cervelo take it up, Carlos must feel good; the italian commentator drags out the vowels; Pow-eelz, Ger-aaanz, Keeeeng!

On the big screen, the race is bathed in sunshine, up here, the clouds roll in, thick, cool.

At the head of the break, Voeckler drives; at the tail of the bunch, the first casualties begin to slide inexorably backwards.

Cervelo drive hard, Phil Deignan goes down on a bend, none of his team mates even look – there’s no time for sympathy; there’s a Giro to win. 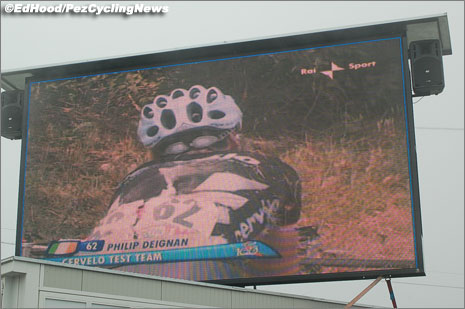 They’re in Pretoro, 15 to go, Cardenas alone in the lead; and now Liquigas come to the head of he bunch – is it Basso’s day? No! Pellizotti – and there’s Lance, bridging, the crowd approves as the big screen shows clouds, too.

The Biblione Dolphin is clear, Lance is in No Mans Land but there’s still a long way to go

Masciarelli drives the gruppo maglia rosa for Garzelli but there doesn’t seem to be the commitment.

Then, at 10 K to go, the Killer jumps hard; Blockhaus goes crazy, it’s over for Lance and Di Luca has “that” look in his eye.

He drives on and only Menchov, Basso and Garzelli can follow.

Sastre is chasing, Lance hops aboard.

Garzelli cracks but battles back as the grade eases just a little – but jeez, he’s hurting!

Di Luca drives, and drives, win or loose – he’s riding like a man.

Levi cracks, ‘The Dolphin’ has 28 seconds on the maglia rosa.

There’s the 5 K banner, 30 seconds is the gap to the leader. 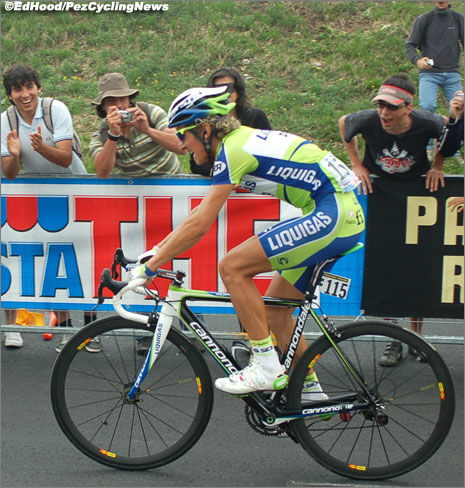 Barrier time; we don’t have to wait long – the Bibione dolphin escapes his pursuers. 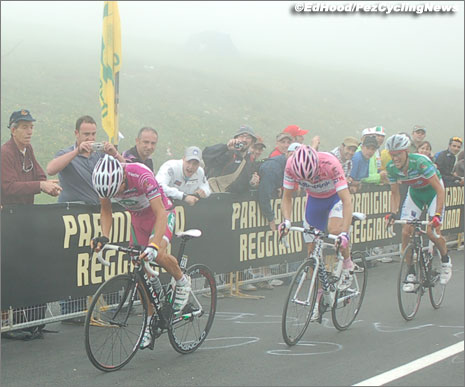 The gruppo maglia rosa is well back, 40 seconds with Danilo giving his all. 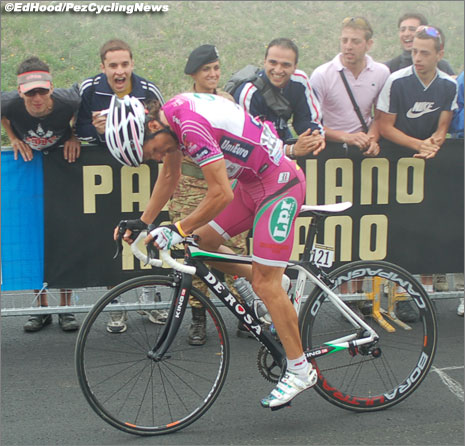 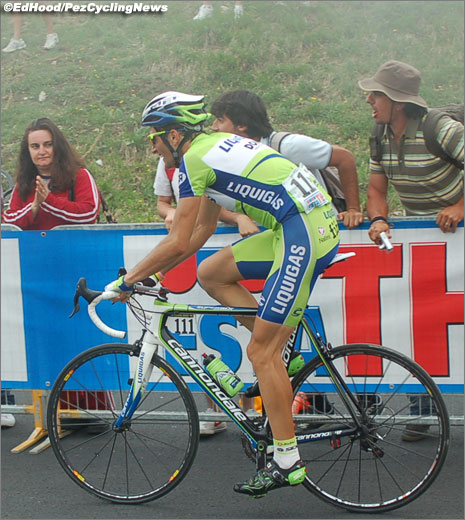 Basso has eased off. 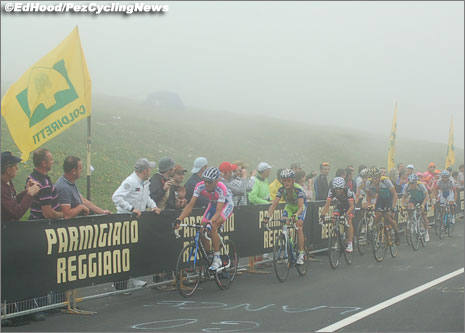 It’s a bad day for Carlos he’s lost that podium spot to drop to fifth. 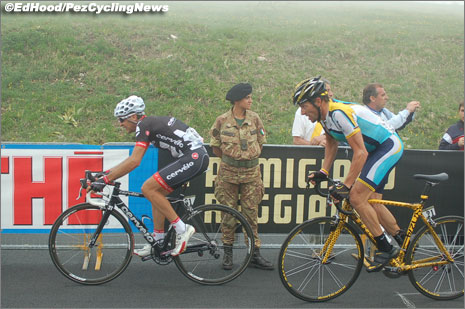 Hero: Danilo – he’s man of the match, grabs third and narrows the gap to Menchov to 26 seconds.

Can he do it? Even if he doesn’t he’s making this a great Giro. And who’ll win on GC? Menchov looks solid to us.