Post-Giro Roadside: I love Scotland; but there’s no Gazzetta in the morning, most of the coffee tastes like John Wayne brewed it beside the Rio Grande and 19 million people watched the same reality TV show on Saturday night – thank God I was at the Giro. The Giro, ah, yes; where all that matters is the race – stars, water carriers, heroes and a few villains.

Why are Italia and the Giro so special? Here are dozen reasons why Dave and I think they’re wonderful:

12. Grappa
Distilled from the waste left from grape making – although it’s the other way around with the expensive ones, they sell the juice to the wine makers – this clear white spirit will warm you on a cold day or slice the edge of your anxieties with just a few sips. 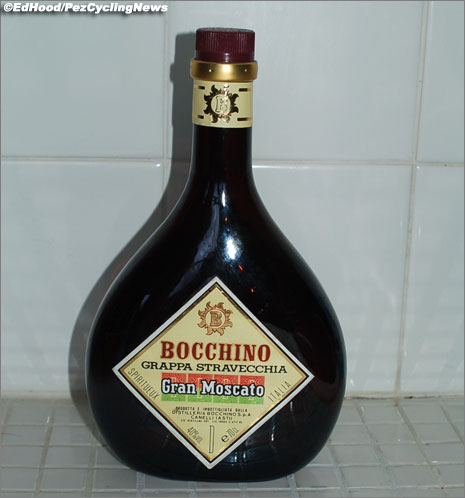 11. The People
It’s hard not to make friends in Italy. We wandered into a wee bike shop in Marina di Citta S.Angelo just for a look at the bikes; within minutes, owner Luciano Rabottini was telling us about his finest hour as a pro – beating Francesco Moser to win the 1986 Tirreno-Adriatico. We had a race to report, but it would have been easy to head for a bar with Luciano. 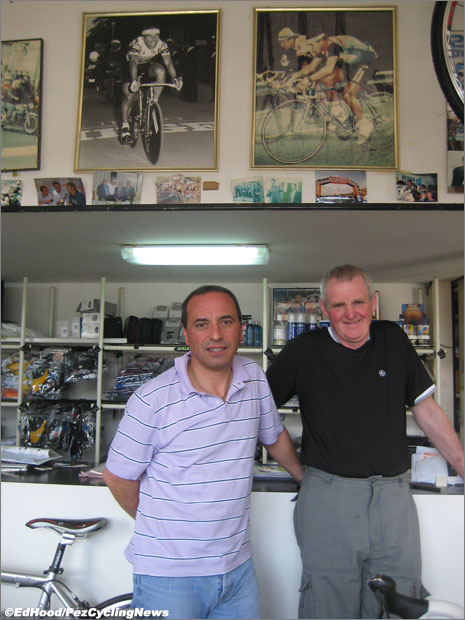 10. The Amalfi Coast
A bike race has never been to a more beautiful place; there were a couple of flaws though – we weren’t in a soft top ‘81 Merc SL and we didn’t have time to stop for a lemoncello. I had read about it many times, but I was unprepared for the cocktail of sea, sky, rock, sun, islands, beautiful villages and smiling faces. 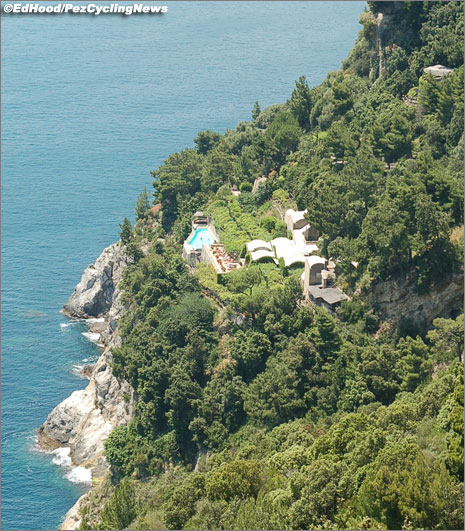 9. Pink
It’s my favourite colour, now. It’s soft, warm, friendly and most folk suit it – in case you haven’t noticed, the folks in Italia really do make the effort. The girls have their strappy tops, the guys their polo shirts, the older ladies their cardigans; not to mention the balloons, the ribbons, the flags. Yellow? – it’ll never catch on! 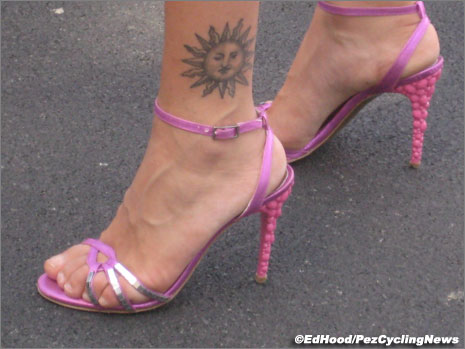 8. Diquigiovanni
Certain Pro Tour teams should hang their heads in shame when they look at the results this low budget squadra achieved. Yeah, there was Rebellin, but forgiveness and granting people a second chance are what make us human; Savio will be hurting over Davide for a long time to come, for sure. His Giro men were in the breaks, they won three stages and they rode like a team should – respect. 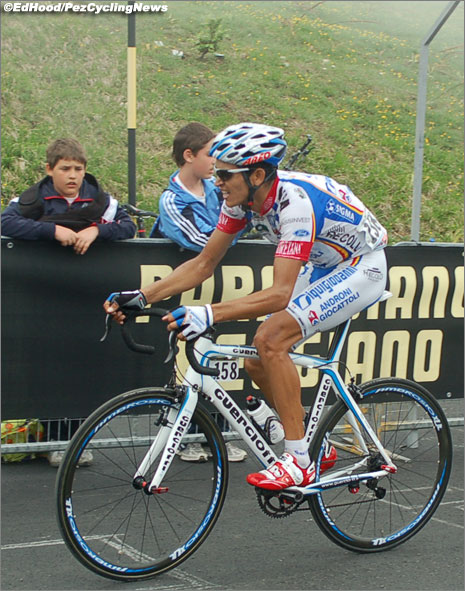 7. Roma
Big, colossal in fact. History all around; those fabulous Roman buildings, the Spanish Steps, the Trevi fountain, the tourists, the street cafes, the parks – and the Fiat 500’s. If Roma was a woman, she’d be Sofia Loren; ageing, a few lines but still elegant, enchanting and beautiful. 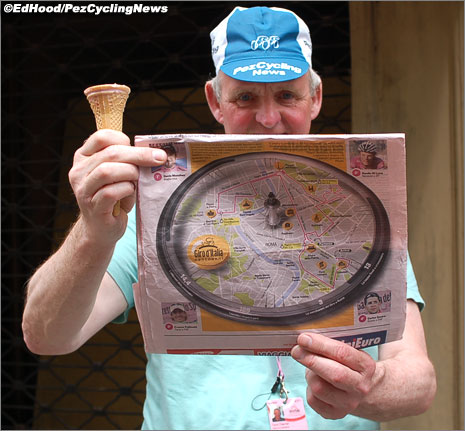 6. Ale-Jet
He broods, he pouts, he shrugs, he slouches, but he’s still rapid and whilst he may have been trying to jump ship from LPR – so he could ride the Tour – he worked selflessly for Di Luca. Sprinters bringing bottles up for the boys on a mountain stage isn’t the norm – but that’s exactly what Ale did on the Blockhaus stage. Like my buddy Ivan says, “the consummate professional” – and nobody looks cooler. 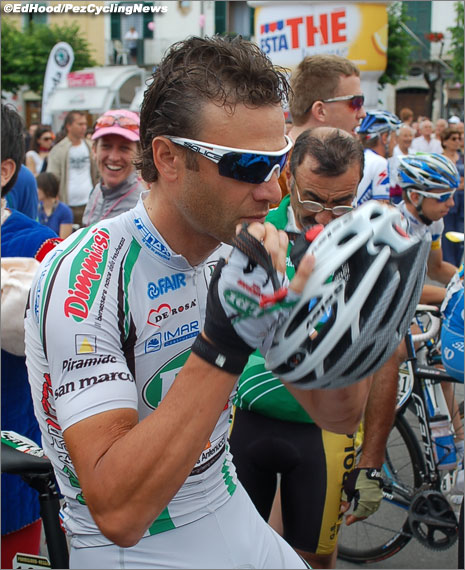 5. Simple food
In the village there was a stand which was promoting olive oil; if Dave and I were in the village at the start – and not out trying to wear out the hire car – we’d make a bee line for it. Olive oil on rough bread is so basic but there’s no better way to start the day. 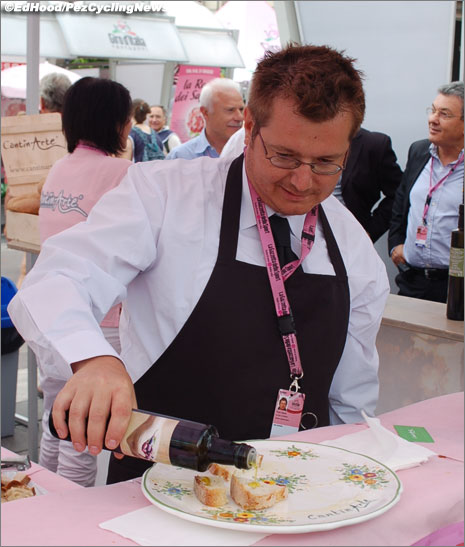 4. Rabobank
Not just Denis, but all of those young fresh faced guys from the Netherlands who rode themselves into oblivion for the big man who looks like he could be their dad. And not forgetting Vincent Hendricks, the man who had Menchov back on a fresh Giant practically before the dead one had stopped spinning along the Roman cobbles. 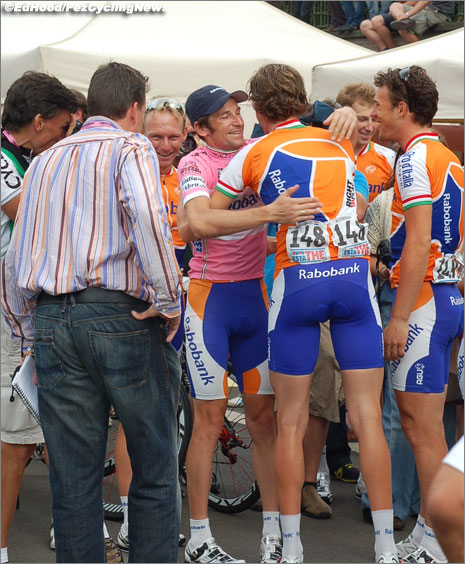 3. La Gazzetta dello Sport
When I’m on the Giro, the instant I waken, I’m thinking; “what will be in the Gazzetta today?” Colour pics, results, stats, interviews – and my favourite; the ratings out of 10. How a sports newspaper should look. 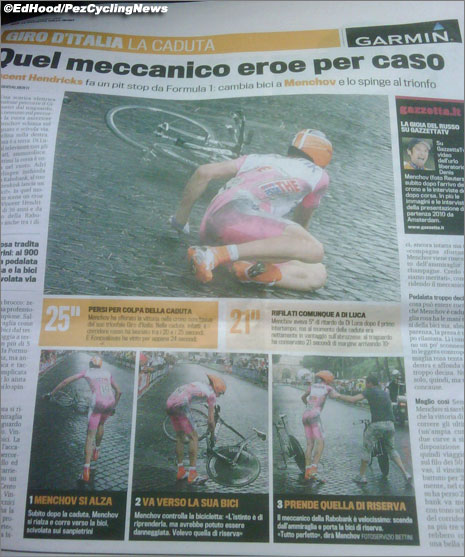 2. Danilo Di Luca
The UCI and ASO might not send him Christmas cards and he’s not lilywhite – very few were from that generation are – but the organisers of the 100th anniversary Giro owe this man a debt. Instead of the usual Grand Tour syndrome of the second placed man panicking in case he loses his podium place, we had the sight of a man and his team racing as if there was no tomorrow; death or glory. This was a bike race. 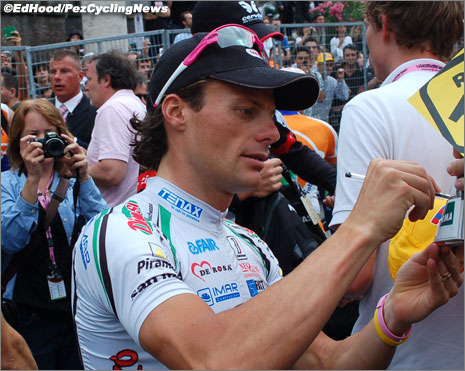 1. As Dave said…
“Just being on the Giro is the highlight!” And there’s little more to say; the scenery, the riders, the bikes, the pretty girls, the scale, the world in pink, the fans, the drama, the emotion – the sheer joy of being there. 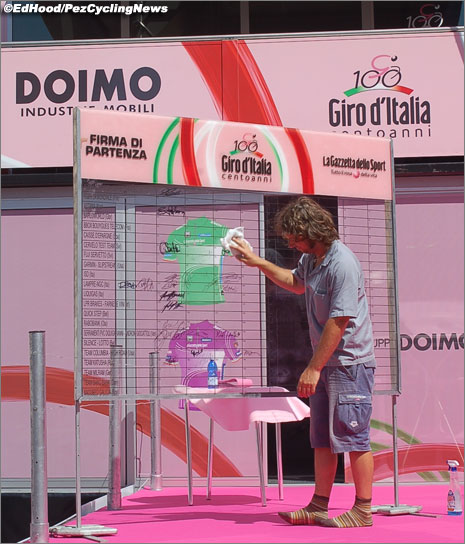 ***
Thank you readers for supporting us, thank you Richard for sending us, and thank you Giro, just for being the Giro. 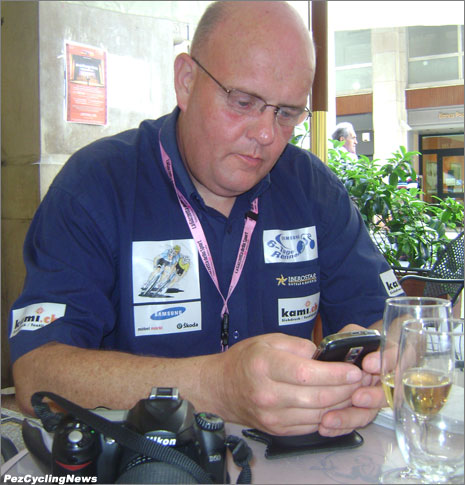 Ever wonder what the man looks like behind the scenes? Every article you’ve ever read from Mr. Hood comes straight from that Blackberry. He’s the Man.