Over the Colle di Gallo

Roadside St. 8 As any of the PEZ-Crew will tell you, it’s not a problem starting the day without any idea on a storyline – the problem is distilling an entire day on tour down into a readable chunk of ‘entertainment’… The PEZ has landed and here’s the proof!

It’s never so much about what to put in, it’s what do I leave out…

I’ve been here for one full day, but as always, it feels like so much longer. As my 5th Giro digging up roadside adventures, I’m used to the potent combo of Giro-fueled adrenaline, espresso, jet-lag and doing double sized days, and maybe the fact that it’s so completely different from my normal schedule… so I’m still in a daze, but the fog is starting to lift. 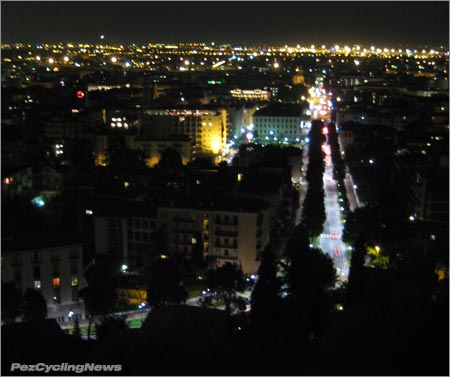 Bergamo’s Corso Vittorio Emanuelle is a grand street indeed – lined with fashionable shops, cool cafes and the ever stylish Bergamsci. It looks great from every angle, both at night…

I hit the ground with both feet (and both my bags – which amazingly beat me off the airplane at Malpensa) after 20+ hours of travel to get here from PEZ HQ in Vancouver. 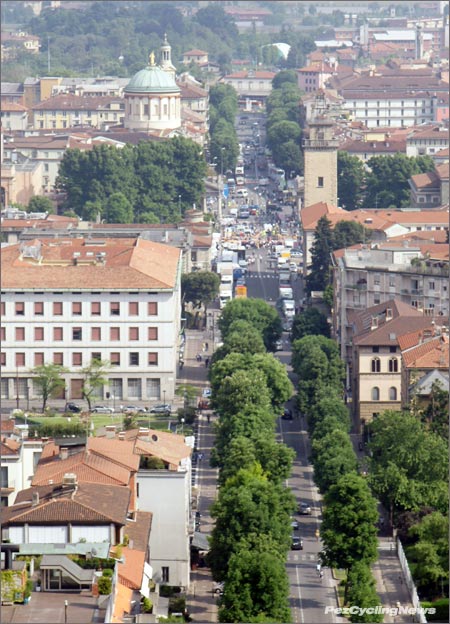 …and on race day.

My Day 1 plan was to ride the final 100km loop of the corsa to the stage 8 finish in Bergamo, then see the race arrive. Not really wanting to ride alone, I called up my old chum and PEZ-pal Martin McCrossan, who does pr for Santini clothing and arranges sponsorships for riders like Magnus Backstedt – and is always up for these types of adventures. Next thing you know, we‘ve got 10 riders and a support vehicle meeting at my hotel on Saturday AM. 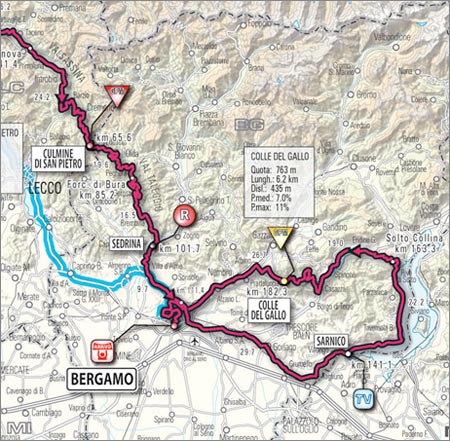 Those last 100km of today’s stage was a perfect re-introduction to riding in Italy and could easily be a Top Ride.

The day marked another first too. Pez-Man Jered Gruber jumped into his car at 4:00AM to drive down from Innsbruck to make this a 2-Pez ride – a rarity indeed. And to his credit – he coerced his lovely gf Ashley to join the fun. She’s appeared on our pages a couple times recently, and her general loveliness presents the Pez-kit in a way that has indeed inspired more than a few reader emails. 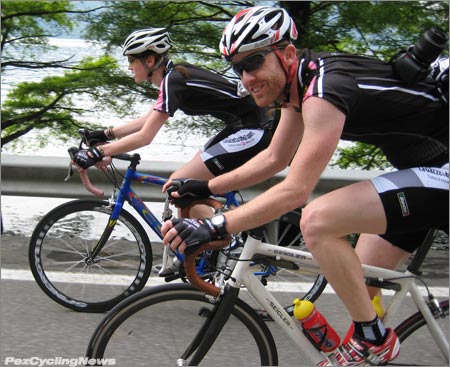 Kudos to Jered & Ashley for making the 4:00AM drive from Innsbruck – ! 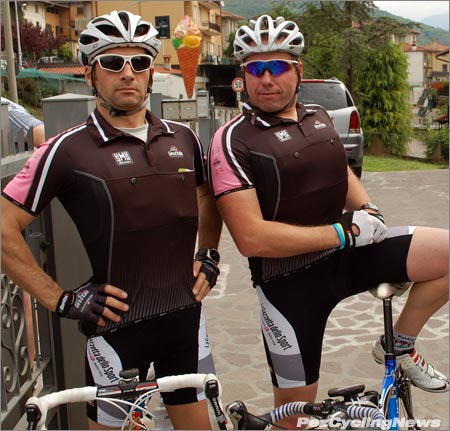 We started the day dressed for success – here’s Martin and yours truly styling-on in Santini’s special edition 100th Anniverasry Giro kit. And yes – those are old style collars and front pockets you see – but presented in modern day fabrics and made at Santini’s factory right here in Bergamo. Don’t worry – they’ve also got the pockets in back, and Santini’s super comfy Twist Gel chamois. Nice kit indeed. 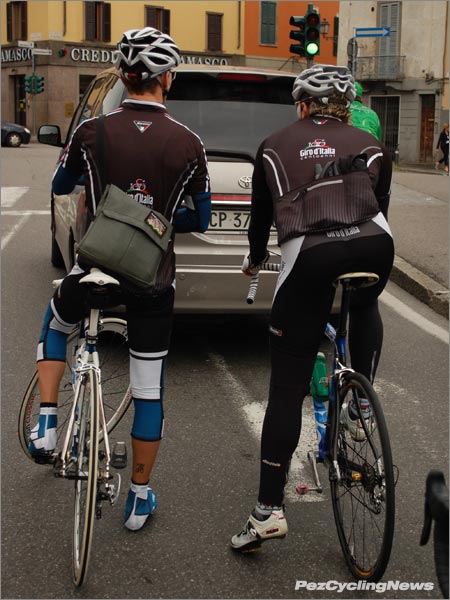 The biggest challenge of the day was simply getting through Bergamo’s morning traffic to connect with the corsa della tappa. Luckily – our support vehicle was driven by local-woman Monica Santini herself. (Yup – that’s her kit we’re sporting.) 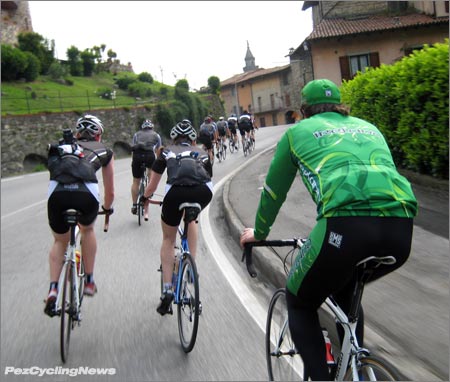 It didn’t take long before we’d cleared the congested roads of Bergamo and were on our way. The first hour was mostly flat, with the odd ever so slight incline. 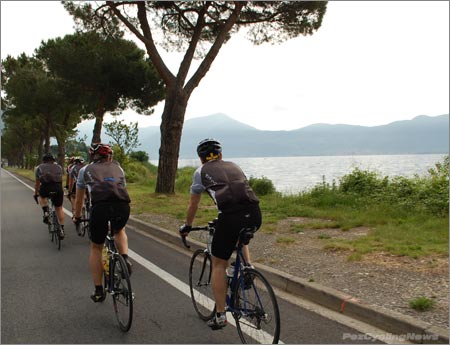 As soon has we found the lake and turned north, I knew I was ‘not in Kansas anymore’. The day had warmed, the skies brightened, and months of cold and repetitive rides back home all paid off as the legs turned my pedals easily and happily. For sure an “it doesn’t get any better than this” moment. 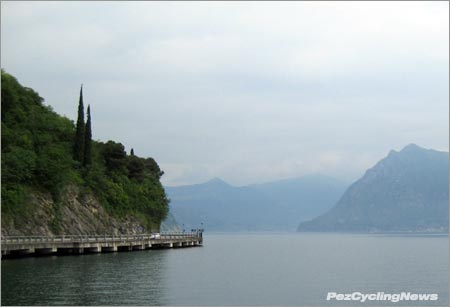 Lago d’Iseo: Bike riding around the northern lakes is really one of life’s simple pleasures – you’d best add it to your bucket list. 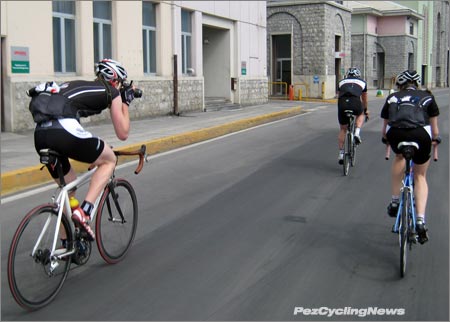 Ever wonder how Jered gets so many awesome pics for his Top Ride stories? I almost would not have believed it until I watched him in action… that camera does not even come off his neck! 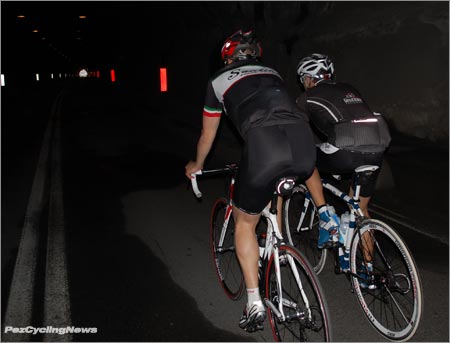 Anyone who’s ridden the Italian lakes district will know about the tunnels. Most are best avoided, but the couple we passed through weren’t to bad – although you never get used to passing through sections of pitch blackness.

At the top of the lake our corsa turned left and up… to around 475m as we climbed over the very nice warm-up of the Colle della Colline climb – never too steep and plenty of switchbacks to keep it interesting. 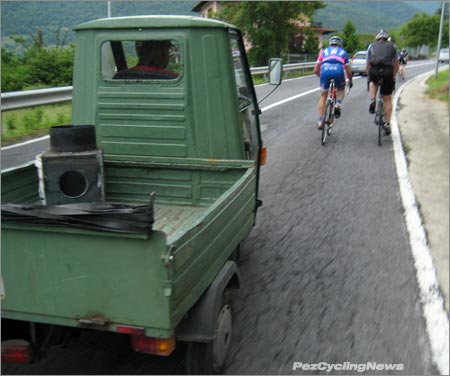 It doesn’t take long before you run into one of these famous 3 wheelers… This guy was making his morning rounds to market on the Colle della Colline climb, and pulled out from a side road right into the middle of our split up group. I can’t help but chuckle when I see one of these, but that ended pretty quickly when I realized the motor hadn’t been tuned in about 45 years, and whatever’s spewing from the exhaust pipe would be considered extremely hazardous emissions in most parts of the modern world. The matter was made worse when, inspite of the driver’s best efforts to pull out and pass our group, his over-revving little engine just didn’t seem to want to make the leap from 2nd to 3rd gear… which had the net effect of expunging a smoke screen of eau de burnt diesel oil that would have impressed even James Bond. 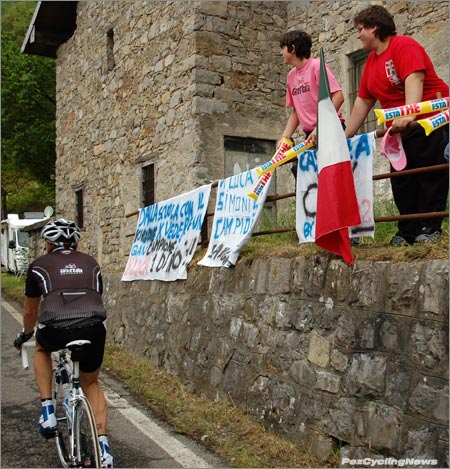 There’s no mistaking the color of this race. All along the corsa we saw villages decorated in Giro pink, and no shortage of signs, road paint and other decorations supporting local riders – although the late great Marco Pantani still seems to be the popular fave (along with somebody’s mamma). 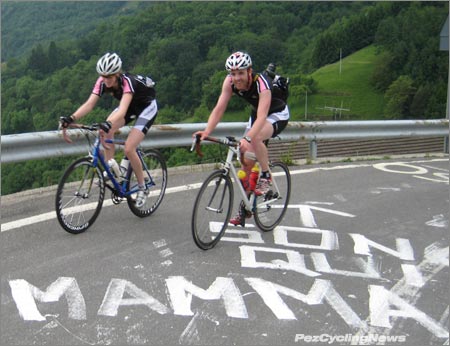 After our obligatory coffee stop at the top, a quick descent took us to the next valley, and a flat cruise to the start of our second climb – the 763m Colle del Gallo. THIS – is a nice climb – it was the perfect combo of 5-7% grades, sweet switchbacks, villages and views, and as we approached the top – the ever present Tifosi. 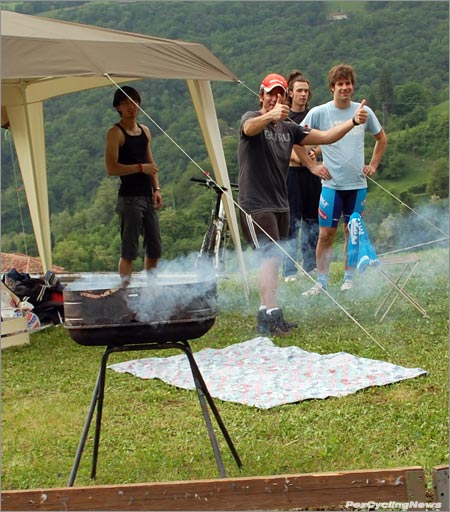 I’ll tell you the smoke from these guys’ bbq was a whole lot more appealing than what spewed from that 3-wheeler. 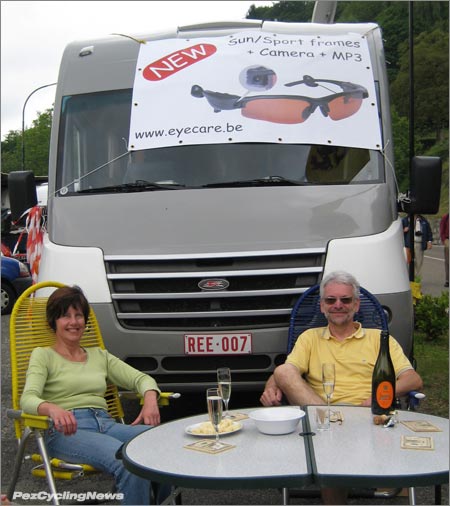 Not far from the top of the Colle del Gallo, I passed these Belgian fans doing it right – the race was hours away, they’d staked a prime spot and were well into the bubbly, but not the usual trapiste that you’d expect from fans more accustomed to cobbles that colles – their chilled bottle of prosecco was the perfect way to enjoy the day, and the perfect way to entice some free publicity on PEZ. Check out Eyecare.be to see their glasses that contain an mp3 player AND and camera. 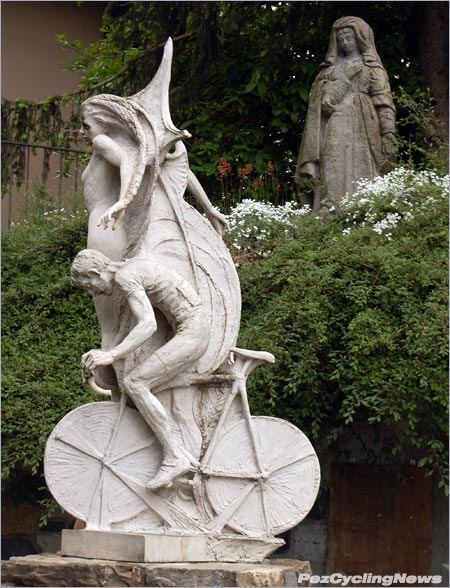 Atop the Colle Del Gallo was the church of the Madonna del Ciclisti. You gotta love a country that has churches dedicated to … well, us.

From here it’s about 25km to go – which starts with a very fine 5km descent, some flat roads down the valley to Bergamo, a short jaunt through town and then you see it – 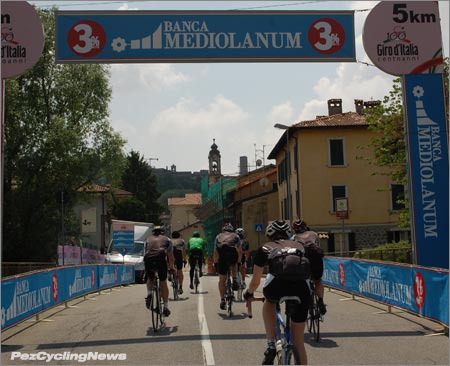 At 5km to go, Citta Alta finally shows itself… 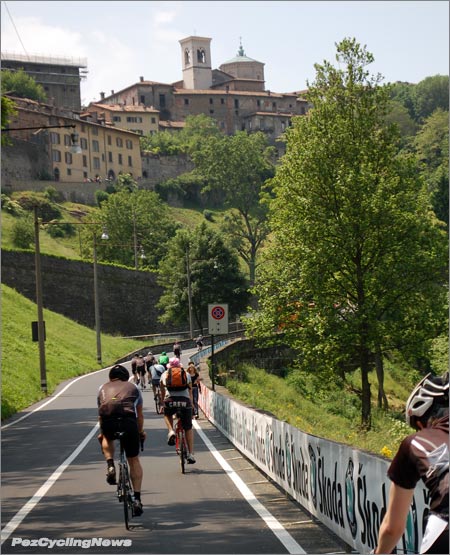 The climb to Citta Alta starts out reasonably enough… 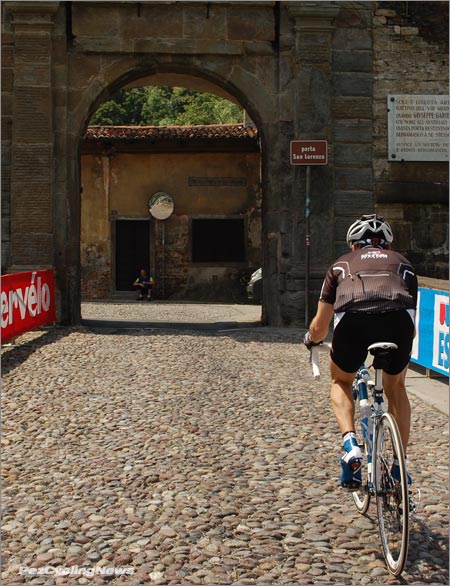 …But just before you pass though the first gate, these gnarly Bergamascan cobbles jump up and grab. They’re not so much cobbles, as uneven sized river stones. This section was maybe 100 meters, and thank god for that – it’s a grunt. 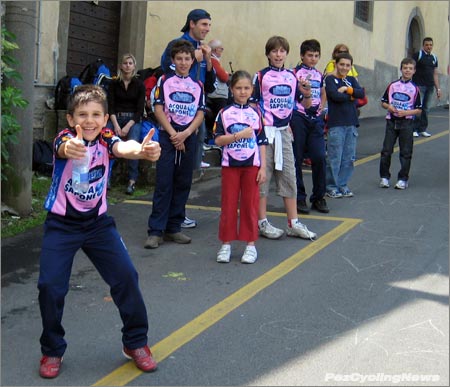 Onto the final pitch of the climb to Citta Alta, and these kids were warming up for when it mattered. 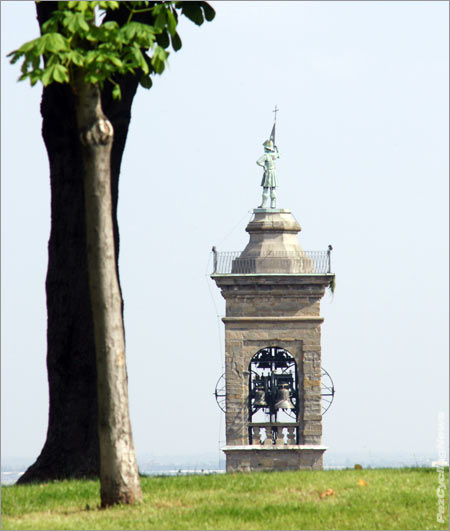 Oh yeah – and the bike Race…
After watching the race at the finish line if 2007, today I hiked up to Citta Alta to catch the action in the old town. I chose a spot by one of the ancient gates – part of the old wall that used to protect the city. The passage is still used today, but wide enough for only one car, so traffic lights control the daily chaos. But with roads closed it was game on. 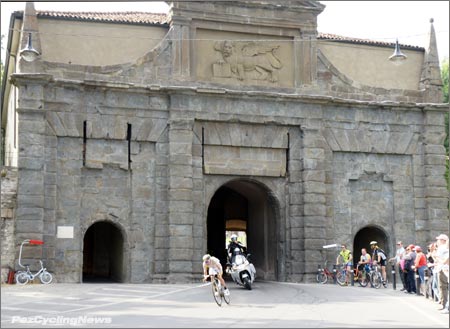 Here comes Siustou – clear and away with just 1400 meters to go, absolutely flying and just seconds away from his first Giro stage win. 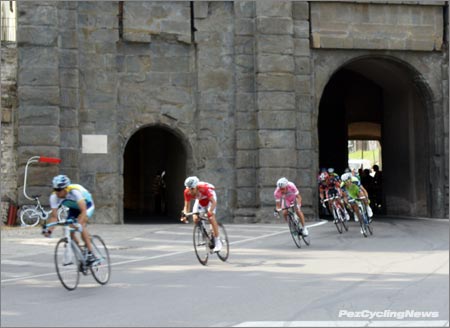 A few seconds later, the chase group charges through – Di Luca easy to spot in pink… followed a split second later by… 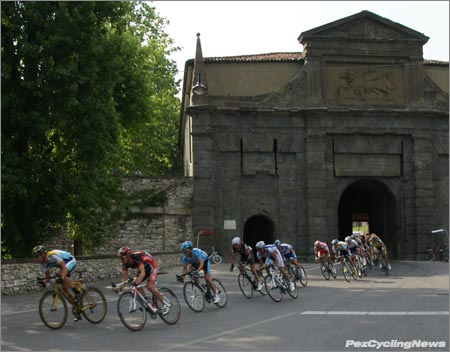 I didn’t actually see Lance until I reviewed my pics in the press room – his form looks to be coming around nicely. 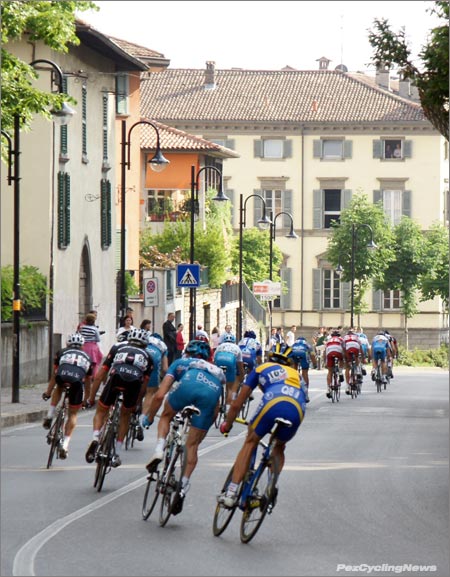 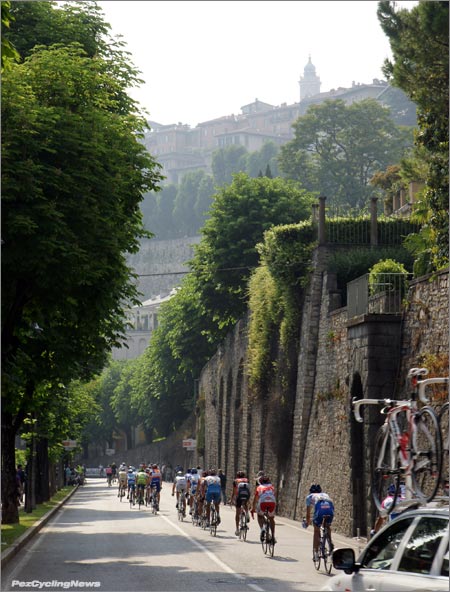 As many times as I see the pros race, I’ll see something new that reaffirms my respect for their jobs. Some minutes after the leaders and main bunch had passed, the gruppeto finally appeared for its last descent of the day, with less than 1000 meters to ride, they were almost done. The problem was that the mass exodous of fans from Citta Alta was in full flow, and the road was jammed with every type of fan-powered bike imaginable.

The gruppetto appeared sans police escort, and I could hear the pros yelling at the fans to clear the way. Just imagine a bunch of yahoos piling into your office at the end of a long day and running amock – all while you’re trying to make that important deadline…. Can we get a little respect here people?! 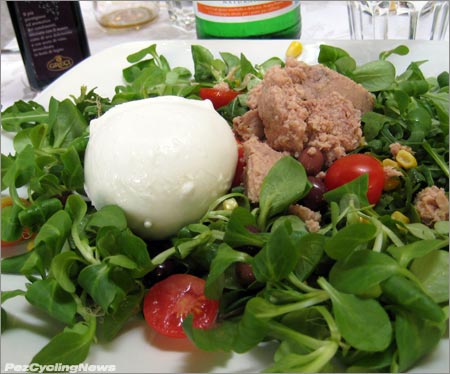 Of course no full-on Giro experience is complete without some gastronomic reward for your efforts. Here’s my salad from lunch – fresh arugula, baby tomatoes that taste like they were grown about 5 minutes away, a tennis ball sized chunk of mozzarella di buffalo, and tuna. And yes – it tasted even every bit as good as it looks…

Ciao a domani and thanks for reading!
– Pez