Much has been made about the big time trial from Sestri Levante to Riomaggiore. It’s 61k, full of climbing, nary a piece of straight road: in short, it’s probably the hardest time trial we’ve ever seen. Nobody, save the GC boys, has taken a closer look at it though. PEZ took up the reigns of responsibility, and had a closer look at what could be the most important stage of the 2009 Giro d’Italia.

The announcement of the 2009 Giro d’Italia route back in December was surprising even by the high standards set by the Giro as, arguably, the most creative and difficult of the Grand Tours. The 100th Anniversary of the Giro was always going to be a little extra special, we just weren’t quite sure how special.

And then Angelo Zomegnan unveiled each stage that cold day in Venice. With each stage, the eyebrows raised a little bit more until Stage 12 popped up on the big screen: a time trial of 61km from Sestri Levante to Riomaggiore. The distance by itself was gigantic. We haven’t seen a Grand Tour with a time trial of that distance in many years, and now suddenly, the Grand Tour with the pedigree of neglecting its time trialists and glorifying the climbers was suddenly offering up a time trial of epic proportions. 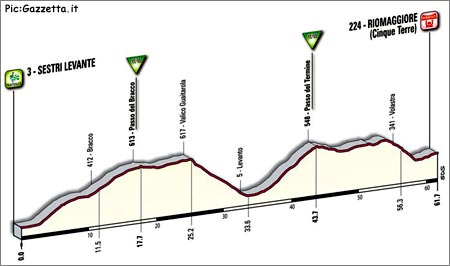 That profile picture doesn’t do the two climbs justice.

Moments later, the profile of the course along Italy’s famed Cinque Terre was shown: two mammoth climbs gaining over 500 meters in elevation apiece, nary a piece of flat road, and everyone was really talking.

I live in Innsbruck, Austria, so the thought of checking out the toughest Grand Tour time trial in over a decade was nothing less than a must. 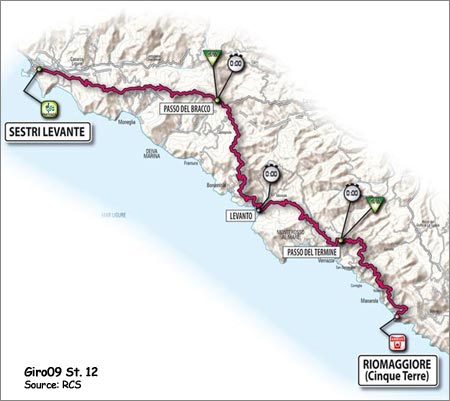 The course starts at the northern end of the gorgeous piece of Ligurian coastline that encompasses five tiny villages: Cinque Terre. Sestri Levante is a town that lives off of the spoils of tourism and the perfection that lies just to its south. The time trial starts amid the bustle of town, enjoys really the flattest section of road that you’ll find along the whole route and then the town of Trigoso emerges into view and the climbing begins. 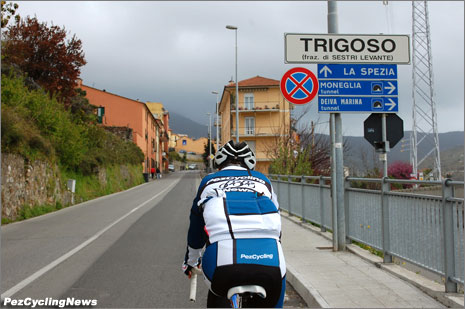 From there, the road climbs at a reasonable rate for about 4 kilometers. The grade ranges between 4 and 8%, the road curves gracefully, but never severely. Most of the sections, when using the whole road, you can almost ride a perfectly straight line uphill through two or three turns. 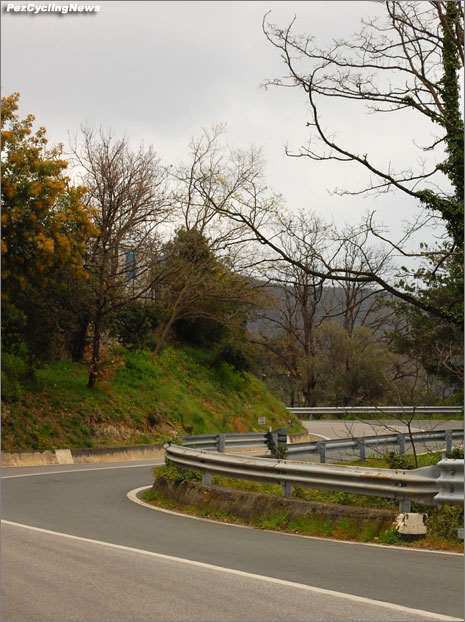 The views are nothing special at this point, especially when you hit the first flat section and you head to the inland side of the ridge that divides the coast from the rest of Italy. 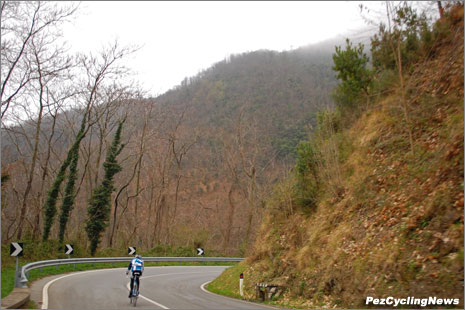 The first half of the first climb doesn’t offer much in the way of scenery, but that’s ok, the course will make it up to us soon.

The road emerges back on the coastal side not long after, and it’s here that you get your first flavor of what is to come. Ocean as far as you can see, that oft-used term azure comes to mind when gazing down at the sea a solid 250 meters above. 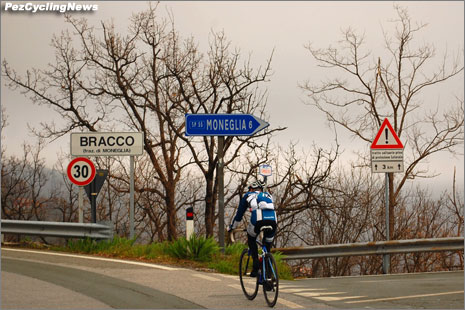 I’d say the hardest part of the first climb starts around here.

The hard part of the climb begins here and the Passo del Bracco is still a few kilometers up the road. The easy gradients of the first half are replaced here with working gradients between 6 and 10 percent. 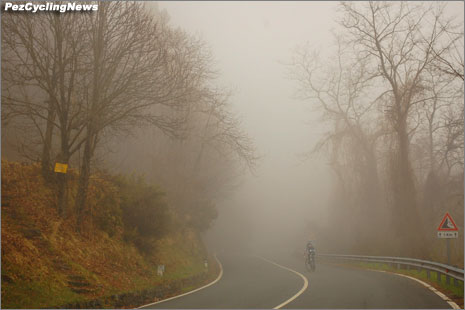 This is also about the point where visibility went to nill. That’s a very real possibility along this course if the clouds roll in.

Towards the top, you emerge out into the open, and the full force of the ocean breeze can be felt – most of the time rudely in the face. 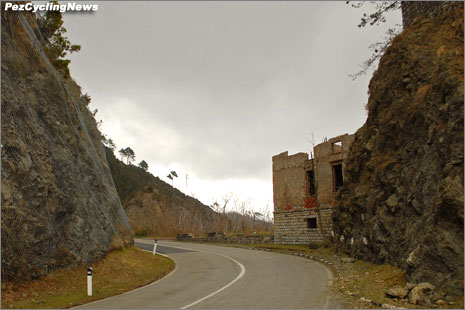 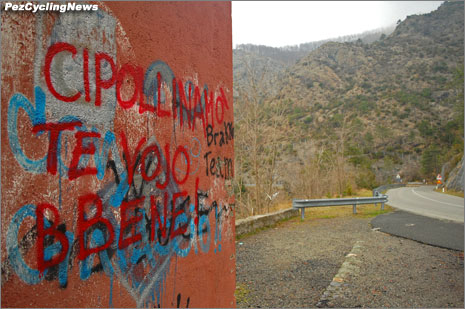 Over the top of the climb, the road is open, exposed, and windy. 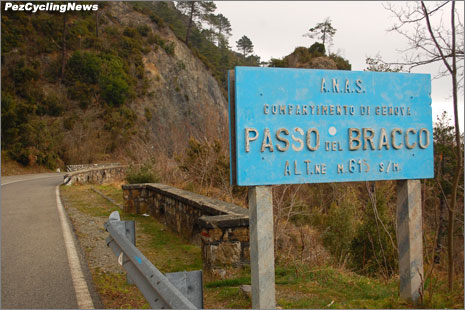 The Passo del Bracco comes sooner than expected, but the same can’t be said for the descent. You turn off the main road not long after the summit of the pass, only to realize that the profile wasn’t joking – the descent is still a ways off – about nine kilometers. 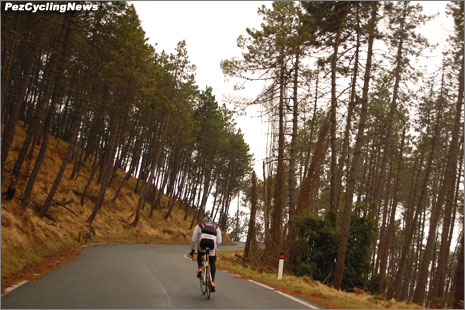 You leave the exposed top of the Passo del Bracco for the forest that defines the latter part of the rolling section, and leads into the descent.

The road gets distinctly more technical as the speed goes up and the road becomes more and more unruly: up, down, left, right, until finally the road falls downward…and then the fun really begins. 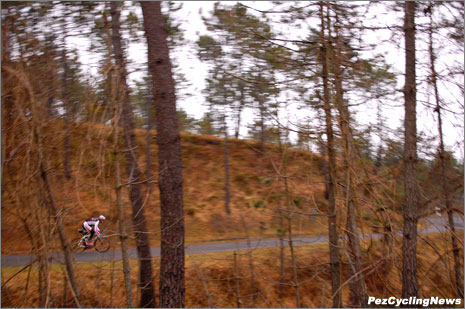 The descent to Levanto is by all definitions extremely technical. The Giro used this same stretch of road in 2006, but in the opposite direction – they climbed the descent and descended into Sestri Levante. 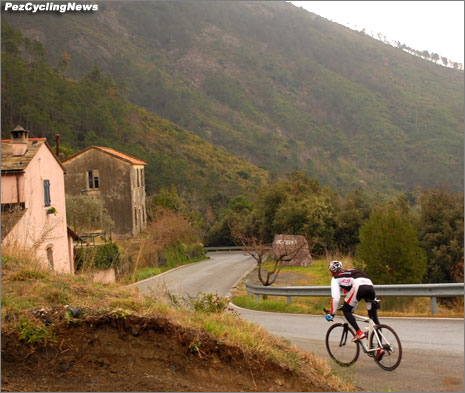 It’s almost eerie being in an area with so many tourists, and then to find a road like this that is just so empty.

Some might recall this was the stage where both Manuele Mori and the infamous Emmanuele Sella came to grief on the final descent not once, but twice. That final descent was described as fast and very technical. It isn’t even comparable to what the riders will face heading down to Levanto. The road is tiny, busted up, remote, and beautiful. 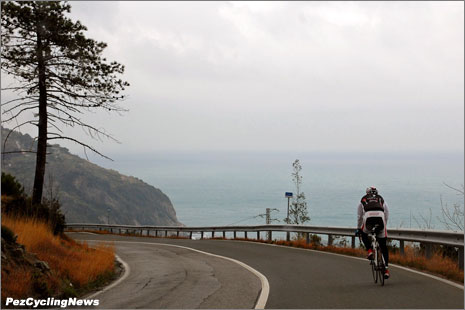 The big views are upon us. Don’t take your eyes off the road though.

Then you emerge to the first expansive views of the ocean, only to realize that attention is highly prized at this point: the hills cascade 600 meters from the road straight to the welcoming Ligurian Sea below. At least at this point, the jolting switchbacks and super tight turns are replaced with a fast, sweeping, bike driver’s delight. 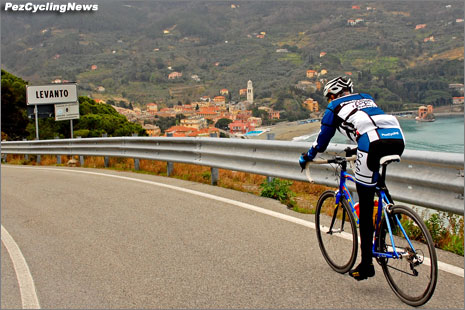 Heading down into Levanto. First climb and descent nearly done. Get ready for Part 2. 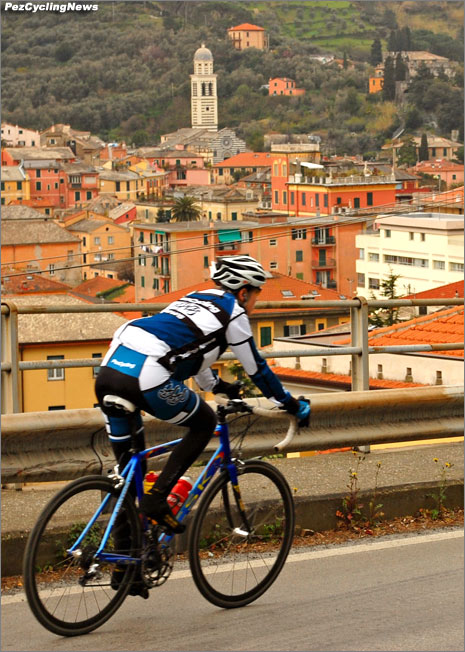 The last few switchbacks into Levanto should keep the riders on their toes. 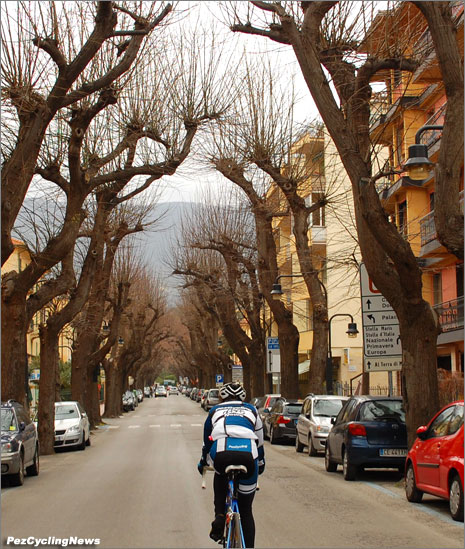 Pretty much the only flat piece of road on this course. It will end soon enough – the second climb is about to start.

The descent ends much too soon, back at sea level, at the halfway point in Levanto. Take a deep breath, it only gets harder from here. The climb out of Levanto is harder than the first, more consistently difficult, and well, more enjoyable to ride (not that that will help the poor riders just trying to make the time cut). 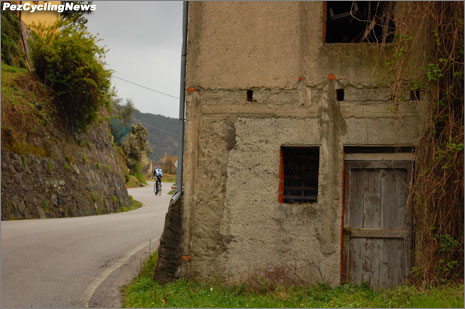 Once again, the maddening crowds are left behind, the road tilts upward, and the remoteness sets back in.

The small road out of Levanto doesn’t gain quite as much elevation as the first, but it makes up for it in its regular 7-10% gradients. 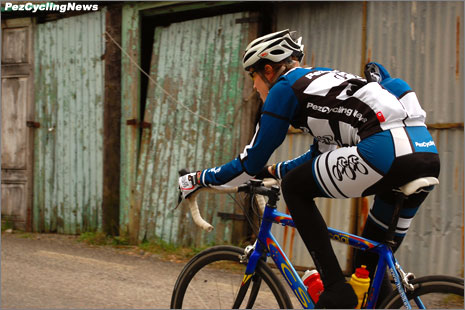 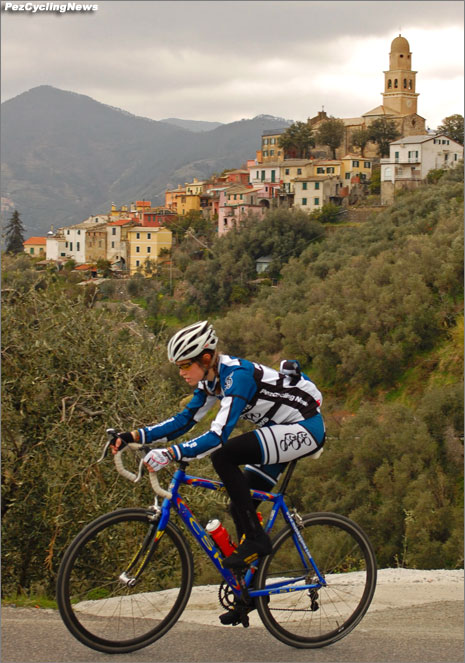 The views are spectacular.

Once to the top of this climb, the really hard part will begin. The climbing weary riders have another 9k section that traverses some of the most gorgeous coastline one could ever imagine. Often, it seems like the word breathtaking is an overused, trite superlative…that is, until you realize that your breath was actually just taken away when you rounded the bend and saw a tiny town hundreds of meters below, terraced gardens extending the length to the sea, and oh yeah, that gorgeous blue Mediterranean extending to the horizon. 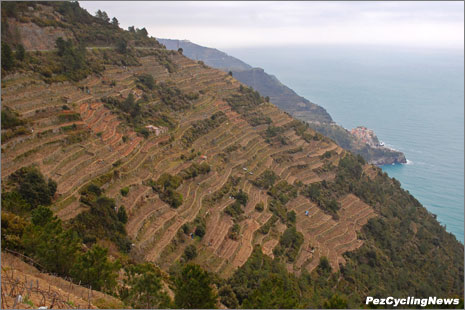 They just keep getting better. Once you summit the second climb, the views are yours for the taking. 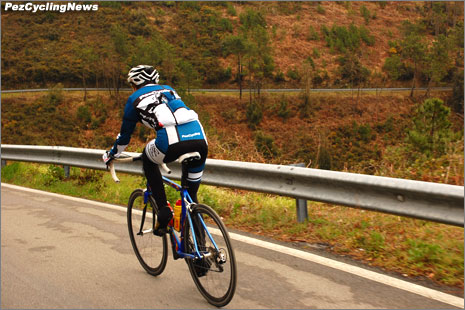 This section continues the theme of technical – even the rolling parts of the course follow the inane contours of the mountains the roads were built upon. The road is never straight, absolutely never flat, and demands constant attention. This is not a time trial for the mindless, brain dead hammerhead. The bike demands driving over every section of the course, uphill, downhill, and in between. 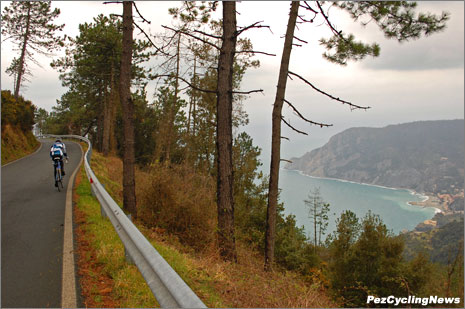 After the tough intermediate section, the rider is finally graced with a descent, but yet again, this is a descent for descenders – Il Falco would weep for joy, Sammy Sanchez fantasizes about it, and Ivan Basso has nightmares – you remember the infamous comment from one of the bluntest men in the peloton, Gilberto Simoni: “Ivan Basso can practice descending as much as he wants, but he’ll still always descend like cement.” Indeed, the descents should play havoc on the race. Again, if the 2006 final descent is any inkling as to the possibilities – havoc could well reign on the descents. 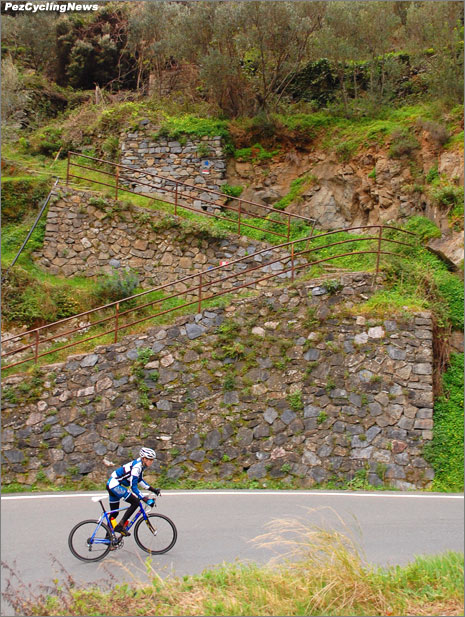 The second descent is much shorter, but it is still very twisty. 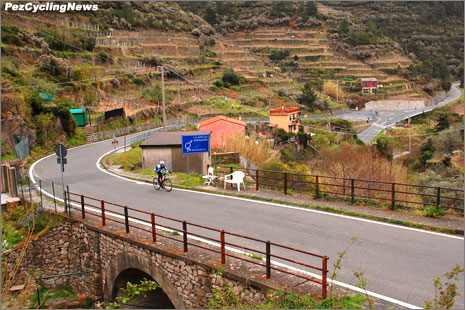 The most difficult section? It could well be the final four kilometers. One assumes that with the racing ending in Riomaggiore, there should be a wild descent down to the sea, except the descent is cut rudely short. The descent is technical, tough, and finishes much too soon. Even worse, the road begins to curve uphill anew. The final stretch was, at least on the day I rode it, characterized by a violent headwind, uphill, and ungodly hard. 4 kilometers more of cruelty before the thing finally comes to its conclusion. 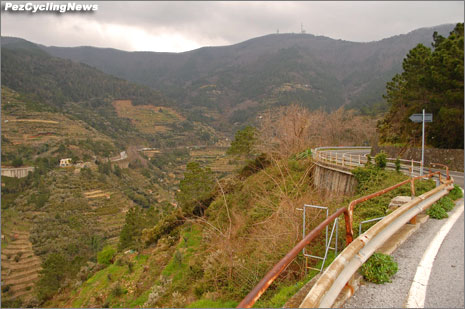 The time trial should end somewhere around here. Right before the real descent into Riomaggiore starts. It’s a good thing too, that’s an even scarier descent.

A time trial over 60 kilometers and nearly 1500 meters of climbing. It’s unheard of. The time trial will be one of the key stages to this year’s Giro, but only time will tell just how decisive it will be. A Lance Armstrong in his heyday could probably count on putting a number of minutes to his rivals in a time trial of this enormity, but it’s not 2002 anymore, and it appears as if the playing field is a little more even these days. There is another American that has found his way in the time trial though: Levi Leipheimer. I think he’ll love this one. 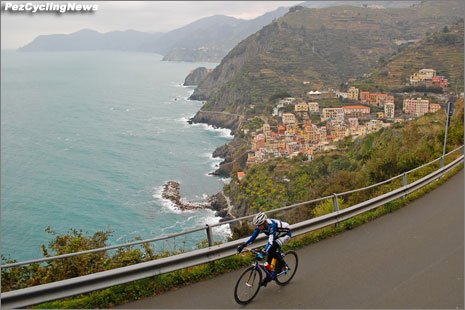 The view down to Riomaggiore is quite nice.

The question as to whether to ride the time trial bike or a road bike? I’m glad that’s not up to me. The likes of Lance and Basso have taken to riding the course over and over again in hopes of deciphering its abominable code. A bike with road geometry will probably be of service to the contenders on this stage – there are just so many obstacles between Sestri Levante and Riomaggiore – big climbs, wild descents, and it’s just nasty everywhere else. I wonder if the speeds will be high enough to warrant the use of a full-blown TT rig. A rider would be silly to ride the time trial with a full-on setup, disc wheel and all, that much is sure.

Comments? Happy? Angry? Tell me all about it: jered at pezcyclingnews dot com

For lots more pictures from the Cinque Terre ride and much more, head to Flickr!