Sure, there are still 10 days till the Giro starts, and quite a few more until Stage 19’s mountaintop finish on Mount Vesuvius, but you can’t fault us for taking a look at what should be one of the final real opportunities in this year’s Giro for the GC boys to try and make a move? PEZ took a little trip down to Napoli to see what’s in store for the riders.

First off, Napoli isn’t the first place I’d go for a bike tour. Outside of the city a bit, things are lovely and peaceful, but anywhere near the sprawling metropolis of Napoli and you’re in for some major car dodging. Feel like you’ve seen some crazy driving before? You haven’t seen Napoli. The cars seem to have an elevation limit though – once you cross a certain meter mark above sea level, they seem to disappear. Thankfully, Vesuvius is a welcome benefactor to this imaginary barrier. 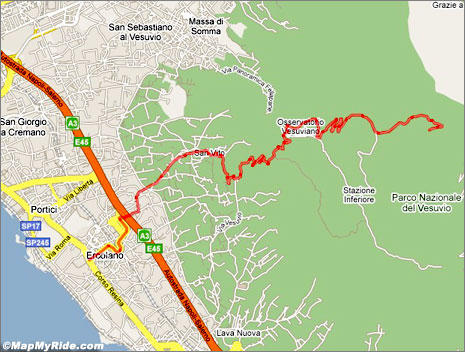 It isn’t too awfully hard to find the base of the climb. We took the local train, Circumvesuviana, to the Ercolano stop, hopped out, and started asking everyone we saw: Vesuvio? Vesuvio? It isn’t too tough when you ask every other person you see walking down the street. 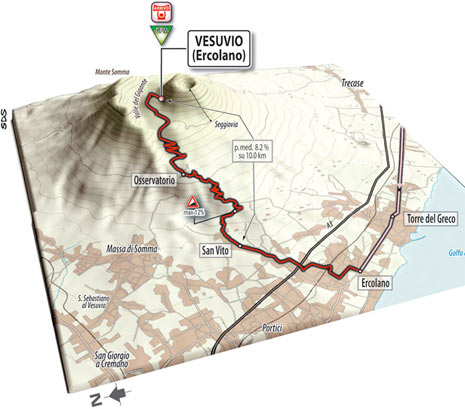 As for the riders? They’ll have survived 18 previous stages, and a lumpy parcours mostly along the Amalfi Coast before they hit Ercolano – and then it’s all uphill from there. 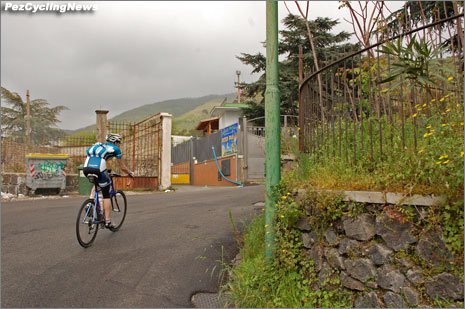 The road starts out moderately as it moves upward through and out of town. The climb will not be confused with beautiful along this section, but as for all things Neapolitan, there’s something attractive about the grunginess. It’s endearing. 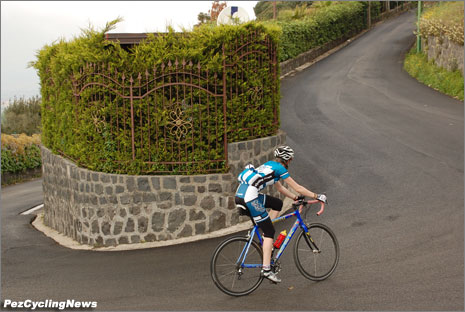 As you move out of the city buildings and up toward the upper reaches of the town, the road begins to steepen. For once, the above picture actually gives an indication of the steepness. There’s a fair bit over 10% along this stretch. 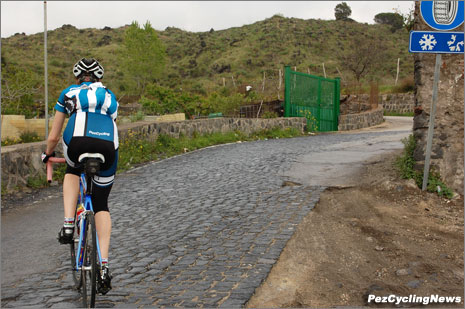 And just in case you were thinking that this was a basic paved climb, ha, we’ve got about 50m of cobbles for you to enjoy. There’s the off-hand chance that this could have been the wrong road for this small section, but after much research and map staring, this looks right, which means there’s a little bit of pave (steep!) to take care of en route to the top. 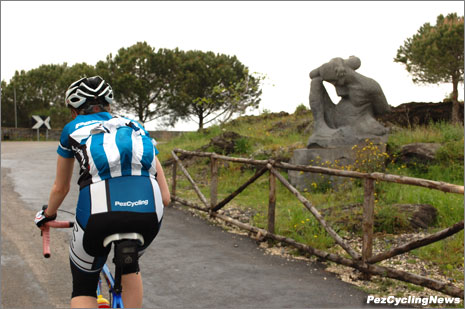 Soon after the tiny tromp across the cobbles, the sculptures begin to show up. I know absolutely nothing about the sculptures, but they come in any and all shapes and sizes throughout the middle section of the climb. They’re interesting, sometimes amusing, and all of the time pleasantly distracting. 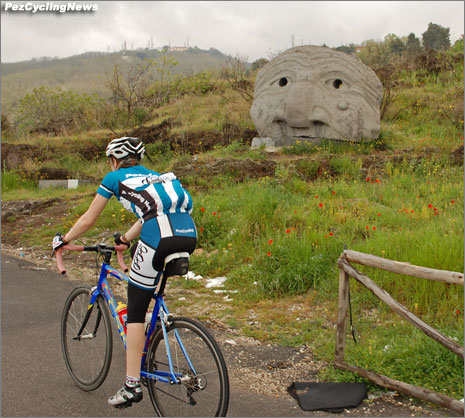 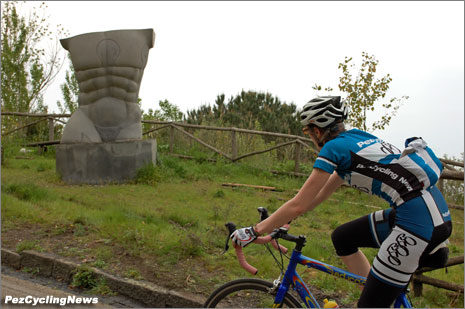 This was the amusing one. It still makes me smile. 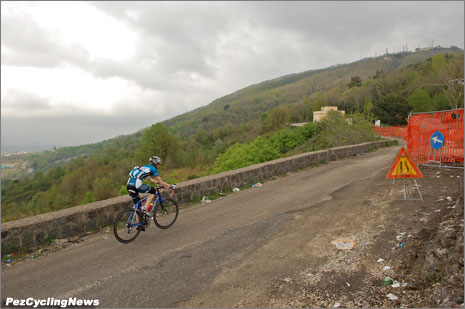 At this point, we were fairly far removed from the bustle of Naples and Ercolano. We hadn’t seen a car in quite sometime, and yet the road was absolutely jam-packed with garbage. Where does it come from? Is there a party up here on the weekends? 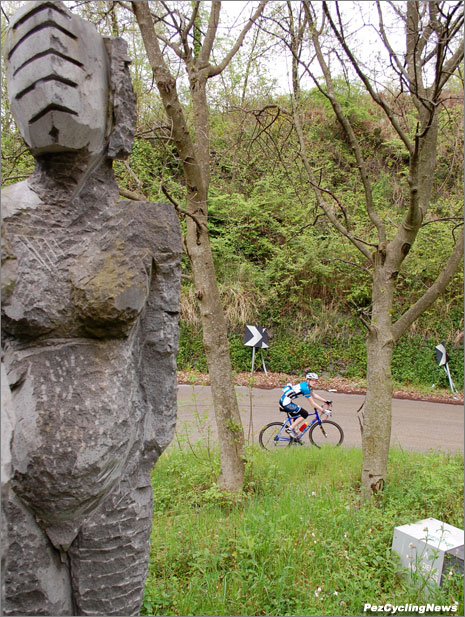 As for the road itself? It’s uniformly steep along this stretch and quite curvaceous. The road enters a beautiful, lush forest for a bit before emerging back out into the open mountainside. 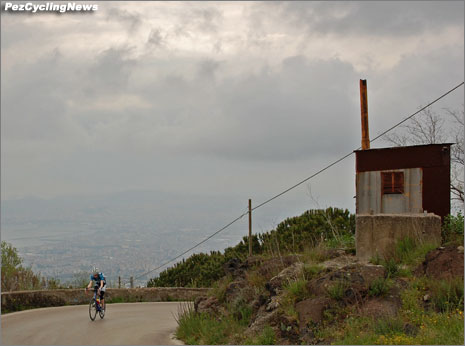 The double digit percentage grade was tough, but never ridiculous. If anything, it was pleasant, as we were able to get ever higher over Napoli, and the threatening clouds actually lifted a bit, allowing us to get expansive views of the area. Ok, so it’s not evident from the picture. Bear with me, it gets better on the way down. 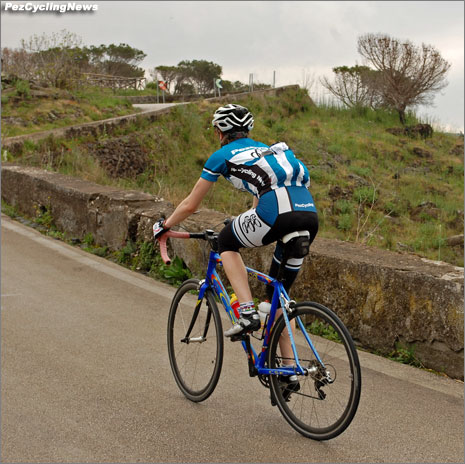 I’m no race tactician, but I’m guessing that this is where the race will be really hard. This is the hardest part of the climb, and if a rider wants to make a difference, this will be the section to go. 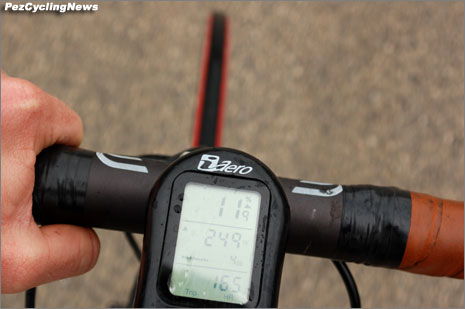 See, I’m not lying, it’s steep here. I think the steepest section goes up around 14% or so. 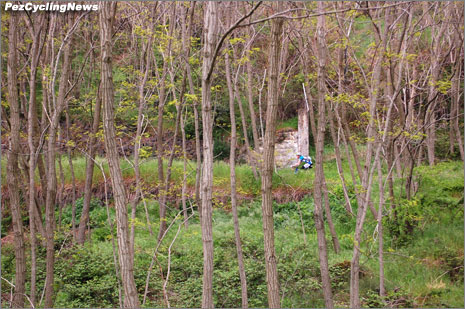 The climb is actually really entertaining throughout. It starts in town, moves up through the many buildings, then alternates between lush forests and open mountainside. After a couple swaps between forest and open, the road widens and with it, a leveling of the grade a bit. 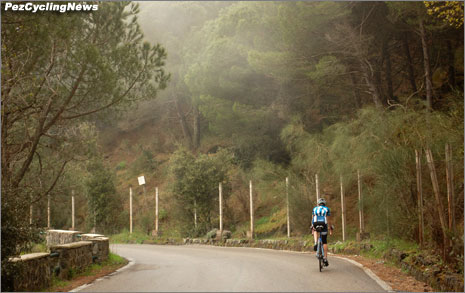 I don’t mean that the grade is easy or anything, but the double digit grades gradually recede, and a more Tour de France-esque 7-9% grade is the order of the remainder of the climb. 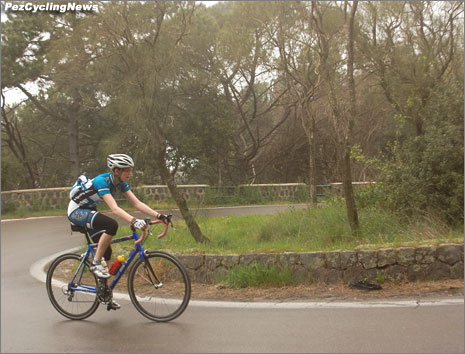 At this point, we were in the middle of the clouds. The rain that had been threatening, was finally delivering on its promise, but for once, it wasn’t all that bad. The temperatures were warm, the raindrops almost pleasant. 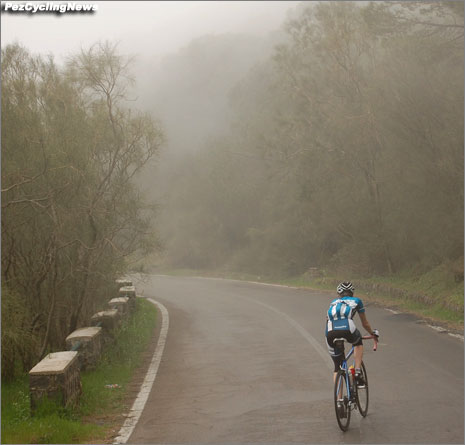 There’s something nice about climbing in the clouds. Normally, I’m not too keen on riding in the rain and all of that nonsense, but the riding through the clouds deal is awesome. It feels all hardcore. Tough. It isn’t really, but hey, it never hurts to get a little bit of that tough feeling, especially when you’re getting to the latter part of a 13k, tough climb. 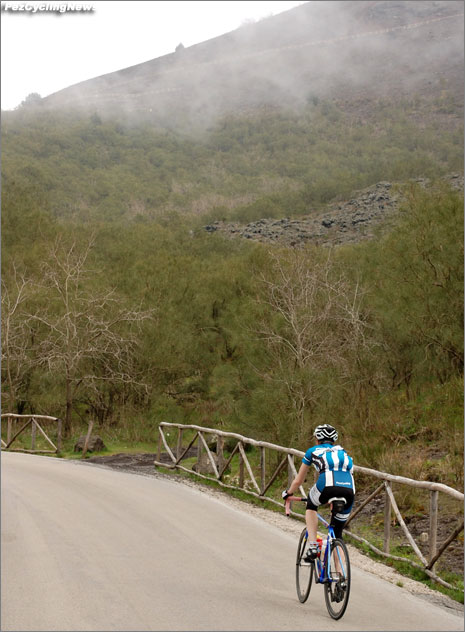 Just as I was getting used to the fact that we wouldn’t see anything beyond about 50m fore and aft, the clouds suddenly rose, the sun poked through, and we were almost done. 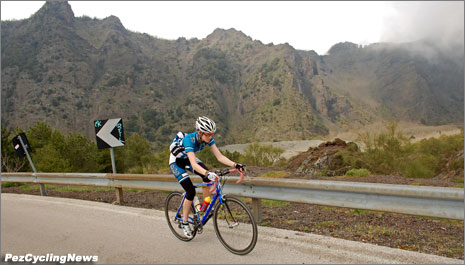 The upper part of the climb shows off the unique everything that is a volcano. Sometimes it’s hard to keep it in mind that you’re riding up a volcano, not to mention a volcano that obliterated a civilization. That fact is by itself fairly sobering, but basic things like the trees, plants, and rocks are completely different. I have never seen anything like it. I’m not botanist, but I do know when something is different than normal – and the flora on Vesuvius is definitely different. Yet another aspect to keep you thinking about anything but the actual physical effort of climbing…not that the likes of Basso or Armstrong or Leipheimer will notice. 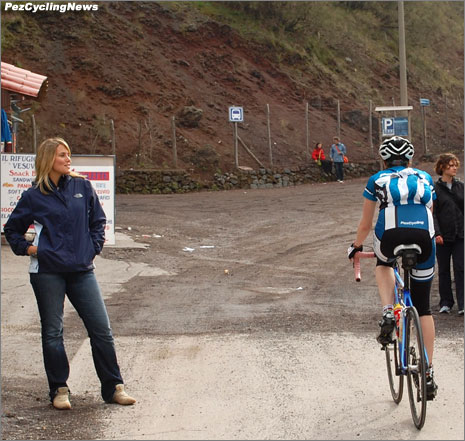 As we finally reached the summit, we ran smack into the tourist hordes. The tour buses bring the people to the top, they get out, take pictures, hop back in, and then the poor bus driver gets to honk ’round every corner the whole way down while everyone inside talks louder than the person next to them, until…I digress. This particular American tourist didn’t know we were American I think and scoffed the following obnoxious utterance: “Oh my GOD, I can’t BELIEVE anyone would do something like that.” She wasn’t very nice. We don’t like you either. 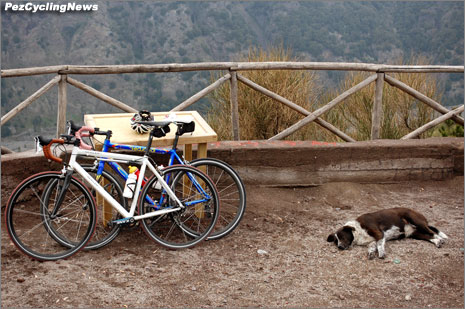 We stopped at the top as well, parked the bikes, let them take a nap with the local dog, and had an ice cream. 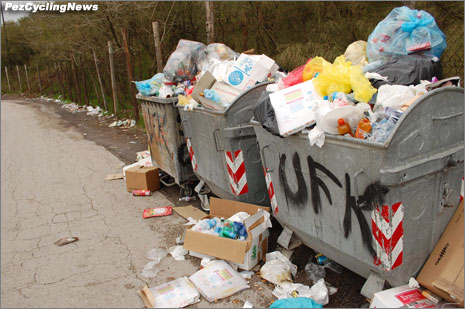 Trash? We’ve got your trash. Pretty much in the middle of nowhere, there’s trash a’plenty. I ask again: where does it all come from? 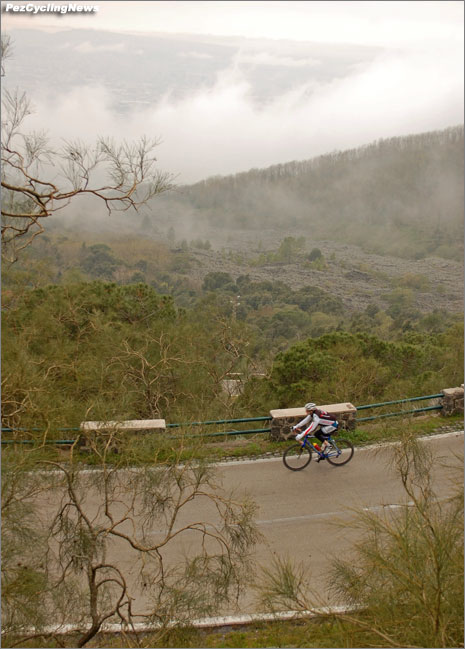 The views heading back down were spectacular. The constantly changing cloud cover made for an entertaining viewing experience. Sometimes rain, sometimes negative visibility… 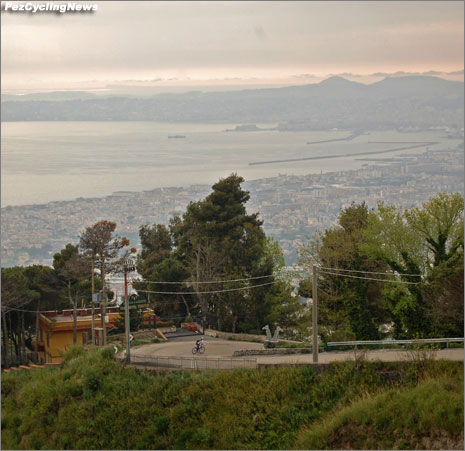 …and sometimes huge views. The descent itself is tons of fun. There’s nothing worse than a tough climb that doesn’t at least give up a good descent. Vesuvio offers up a lovely descent, so take heart in that. 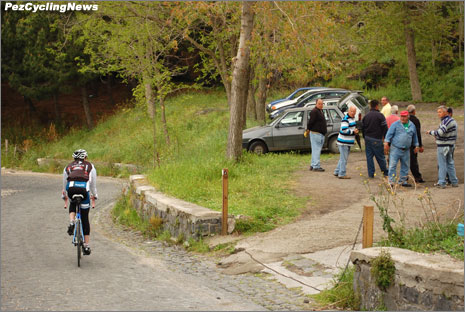 Towards the bottom, we were bumping over the miniscule cobbled section when we ran into a group of men playing bocce. Ashley said ciao. They stood agape, staring at her, and no one said a word. She said ciao again, and they suddenly snapped to attention and a chorus of ciao bella’s rained down. Gotta love it.

Questions? Comments? Happy? Angry? Even if you just feel like chatting, send me an email: jered at pezcyclingnews dot com.

Looking for more pictures? Head on over to Flickr for the full tour.